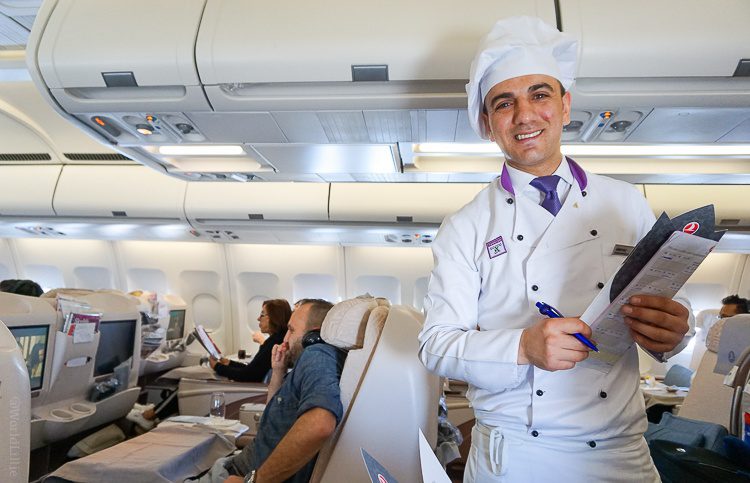 Just look at the expansive leg room in the above photo from my Boston-Istanbul flight. That, my friends, is the seductive beast known as “Business Class,” and now that I’ve encountered it, t’will be mighty difficult for this 6-foot-tall woman to fly long distances any other way! 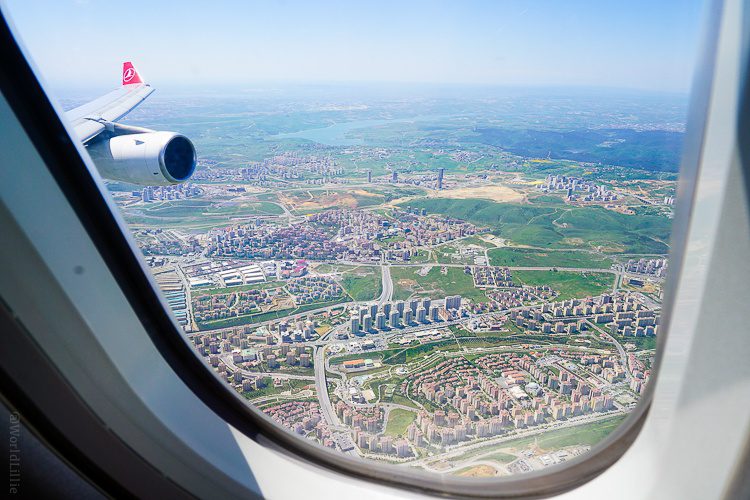 A view of the outskirts of Istanbul on my flight.

So, what led me into the arms of Business Class? Turkish Airlines! The airline is innovating and expanding rapidly, and as part of this leap forward, hosted several travel bloggers — myself included — for an epic week-long Turkey trip. On the first day of this tour, we were treated to some fascinating behind-the-scenes secrets at the Turkish Airlines training center in Istanbul. Join me as I take you inside! 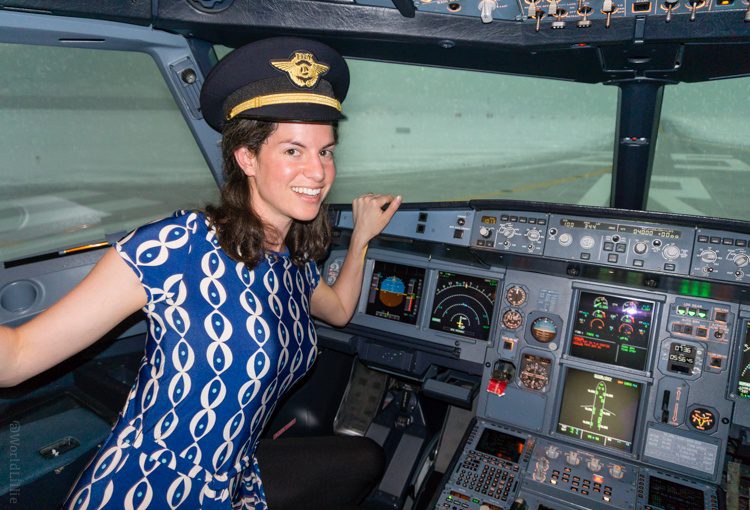 In the Turkish Airlines flight simulator where pilots are trained.

First, the flight simulator! These hulks of experiential education perch upon hydraulic legs that make “turbulence” feel real for a practicing pilot… and also cause the simulators to resemble Star Wars animals. 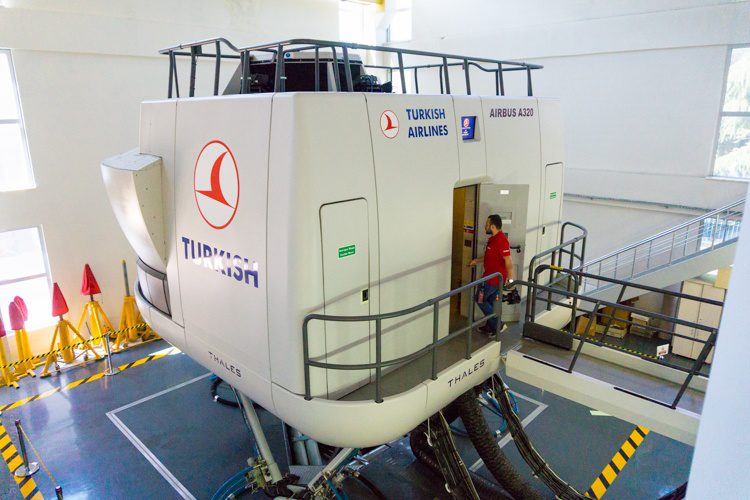 I got a big kick out of the 3-dimensional “window” which projects different flying conditions with the tap of a button. We got to see “Sand Storm,” “Sunset,” “Lightning,” and (pictured here), “Falling Snow.” In retrospect, I’m not sure how I tolerated watching snow again after the record-shattering blizzard we just endured in Boston, but luckily this was just a pixelated storm. 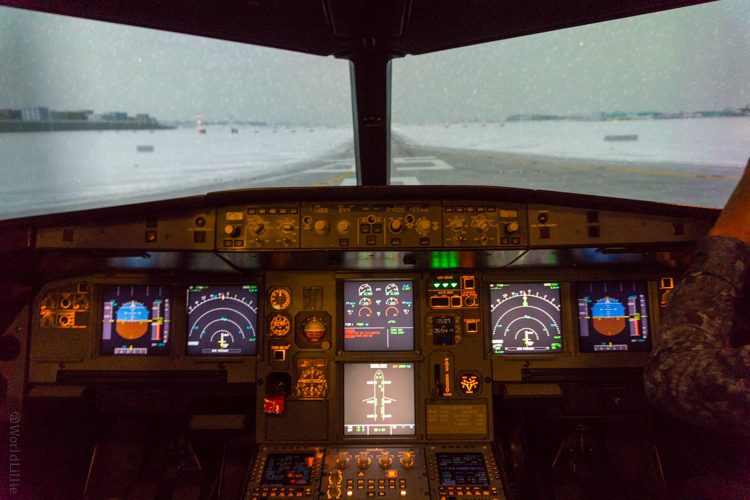 In the flight simulator, a press of the button changes the weather. Here: snow.

Next, we sashayed to a cavernous hangar run by Turkish Technic: the group that maintains and fixes planes for Turkish Airlines. It was wild to see these towering planes ripped open and draped in ladders, looking like dragons strapped to the ground to be tamed. 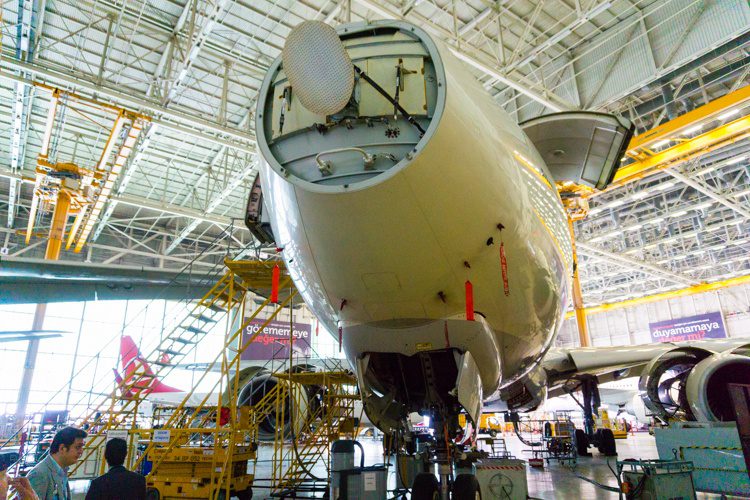 As Turkish Airlines continues its rapid expansion, these hangars are working diligently to keep all the equipment ship-shape (er, plane-shape). Just how fast is Turkish Airlines expanding? As of early 2015, it has become the world’s fourth largest carrier by destinations, reaching 261 airports across Europe, Asia, Africa, and the Americas. Given Turkey’s prime geographic location (Istanbul is within a ten-hour flight of countless major cities), plus the marketing passion of the Turkish Airlines team, methinks the company shall continue its impressive ascent. 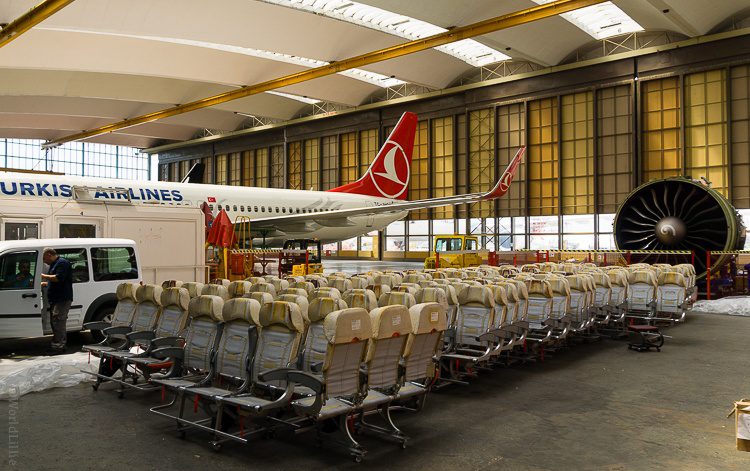 We got to see Turkish Technic upgrading the seats in a plane.

Since Turkish Airlines now flies to so many places — at surprisingly affordable prices at that — you will often see its name pop to the top of your flight searches. Unfortunately, due to incorrect stereotypes about Turkey and Turkish Airlines, several people I’ve talked to recently have opted for another airline instead, even though those tickets were more expensive. Nooo! I urge you to put aside any misconceptions you have about Turkish Airlines. My flights with them were world-class, and I believe that you will enjoy their experience, too.

One of the concerns an acquaintance confided to me was, “I don’t want to take Turkish Airlines because their flights usually have a layover in Istanbul, and I’m nervous to go there.” Again, I beseech you to set aside those thoughts. Istanbul is one of the most beloved and beautiful cities in the world (the Blue Mosque alone is worth the trip), and I loved my time there. Further, Turkish Airlines offers FREE tours of Istanbul if you have a layover of at least 6 hours! If you want to remain in the airport, the Business Class lounge is unbelievable, including a movie theater (with popcorn!), unlimited free food, and a roving masseuse! 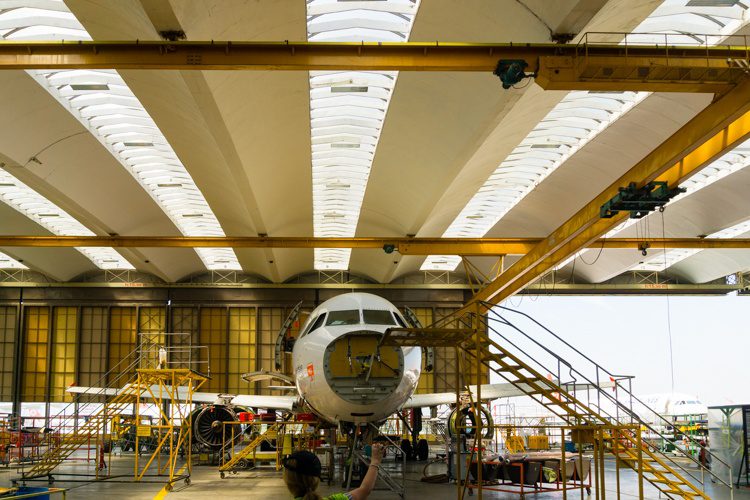 I love the lines in a hangar.

Anyhoo… Back to our behind-the-scenes tour of Turkish Airline’s training center in Istanbul, heading now to the building complex in which potential flight attendants undergo extensive training. Our next stop was tantalizingly close to fulfilling a childhood dream: to bounce on the airplane evacuation slides without actually being in an emergency situation! Unfortunately, we were cruelly barred from said trampolining, but were impressed nonetheless to learn that Turkish Airlines flight attendants get hands-on practice in all elements of plane function, from the mundane to the wild. 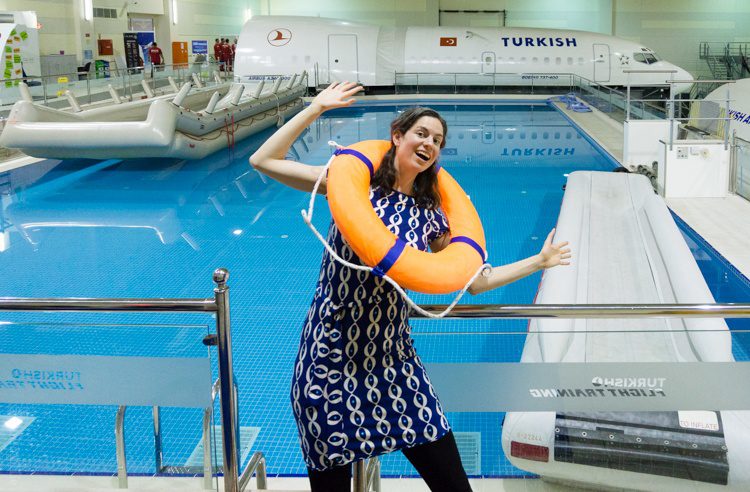 Onward we marched, donning white coats, hairnets, and protective booties to tour “DO & CO,” the catering company that makes the famous food of Turkish Airlines. It was mesmerizing to see the process of creating thousands and thousands of little appetizer plates. Such care and art! 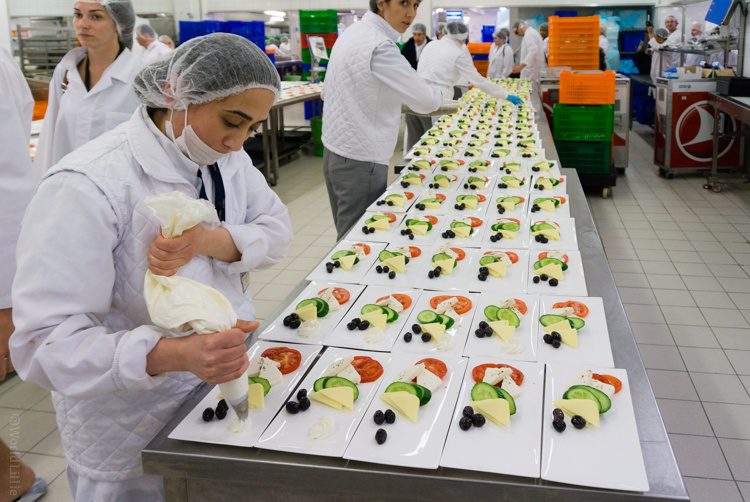 This brings us to what it was like to actually be on my round-trip Business Class flight with Turkish Airlines. Well, once you sigh with relief at the sprawling leg room, you will be offered a refreshing fruit spritzer drink to start your journey. I chose raspberry, pictured below. 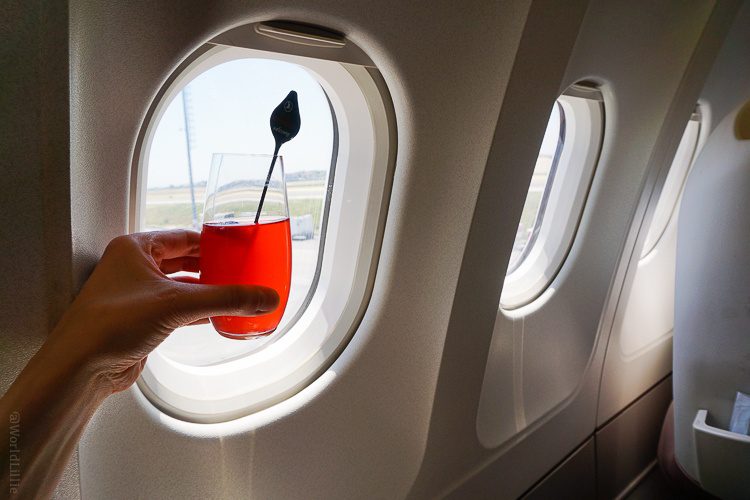 The welcome drink in Business Class.

Then, the seats… ooh, the seats! These puppies recline fully, meaning I actually slept for NINE HOURS of the ten hour direct flight from Boston to Istanbul! Unprecedented. To assist in this shut-eye, you get a fresh pack of sheets (the flight attendants make up your bed), a blanket, slippers, and a toilet kit replete with a comb, toothbrush, eye mask, and ear plugs. 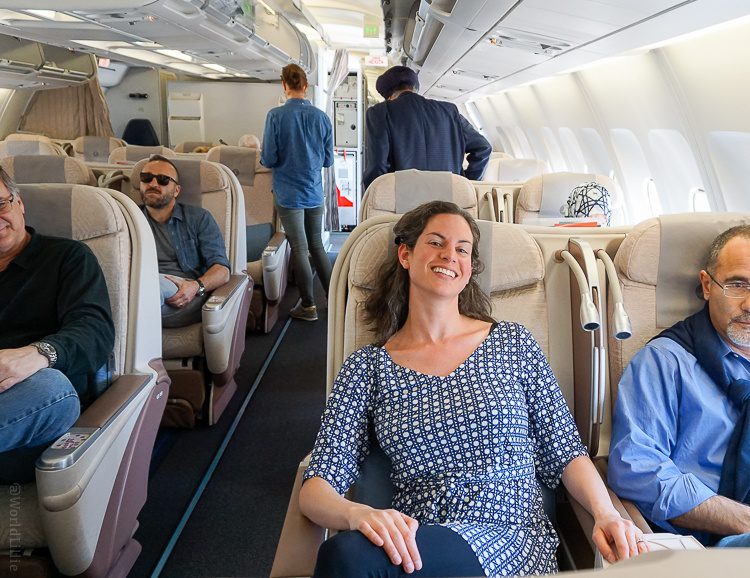 Naturally, entertainment abounds on-board via your interactive screen. During the flight home, I watched two movies and three TV episodes, and played some jolly video games. The food was delicious, and a highlight was cooing over the adorable baby salt and pepper shakers. 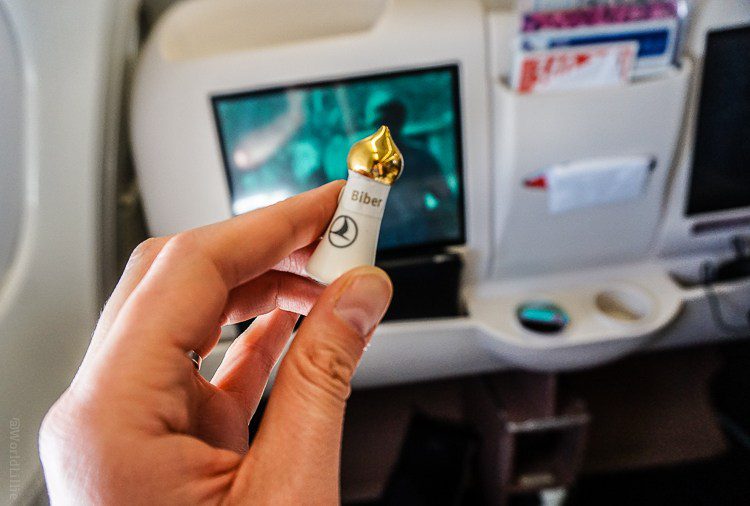 So here is my confession: Once in 2009, and once in 2012, I opted NOT to fly Turkish Airlines, instead choosing other companies whose names I knew better. Why? I had it that Turkish Airlines was an unknown. I also worried about the layover in Istanbul, having never seen the airport before. What a fool I was! Now that I’ve finally flown Turkish Airlines, I had such a good experience that I’m already planning my next flight with them… and not just because I want to cuddle that teensy pepper shaker again! 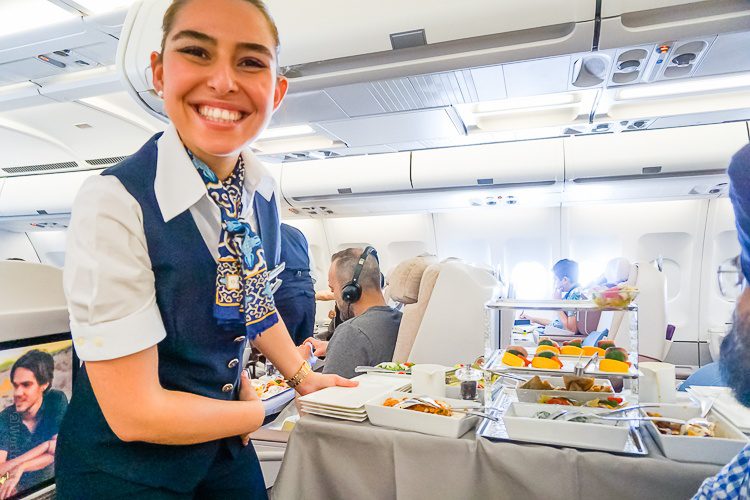 That happy smile matches my glee at seeing an entire cart of desserts!

I was a guest of Turkish Airlines during my week in Turkey, but all opinions and similes comparing airline equipment to Star Wars animals are my own.

Hi I have question, I'm cook I wanna be Flyng chef. Please let me know about it, What I need ?

Ooh, good question! I'm not sure the answer, but keep looking and I'm sure you'll find it. Good luck!

You must have had a luxurious ride. They were so well prepared for almost any possible event. I'd like to take that airline someday.

Yes, I have flown with Turkish Airlines as it was the cheapest airline to book. On my way to India! This was in 2005 so I don't think the free tour was included then as I did a 24 hour stopover and ended up paying â‚¬25.00 for the visa which I was a bit annoyed about as I was flying from Berlin and all the German passengers breezed through. I'm British by the way!

Anyhoo! I really liked Istanbul and only wish that I had spent a few days there instead of just 24 hours. I really packed it though as I booked a hop-on-hop-off tour, went to the market, had lunch on the top floor of a souk building and fell asleep in the taxi.

The locals were great and really looked after me as I was travelling solo. I'd happily fly with Turkish Airways again.

We may have an opportunity to fly Turkish Airlines in the near future. Thanks for giving us an inside look into the airlines and for dispelling any negative stereotypes.

Hey, it was nice talking to you yesterday. We are certainly lucky that there is now direct flight from Boston to Istanbul. For someone that travels frequently to that part of the world, including Israel, it made life easier. THY has the best service in my opinion. I do speak Turkish and they already make me feel at home before I am home. As for concerns about the safety, it is not Syria there. There is not an active war going on anywhere. Turkey is a large country and has 70 million people. Thanks for the delightful words.

Thanks so much for reading and commenting, Dalya. Your insights were fascinating and important. I look forward to talking more.