Beautiful Istanbul, Turkey at Night by Boat and Rooftop 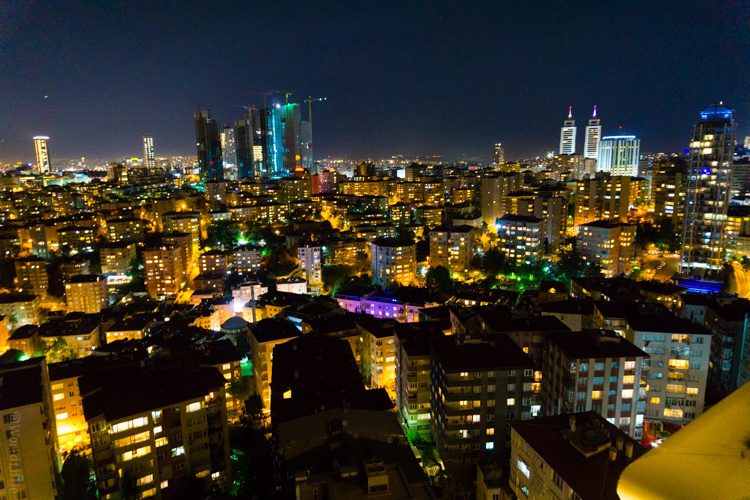 My view of downtown Istanbul, Turkey from a rooftop restaurant. Wow!

“Why are you going to Turkey?” sneered the saleswoman I was chatting up in the store in the week before my trip. “There’s not much there, plus it’s really dangerous, and also oppressive to women.”

“Ms. Marshall!” yelled one of my seventh grade students when he learned I would be taking the next four days off of teaching to fly to Istanbul, “Don’t go. It’s a war zone over there!”

Readers, let me assure you: After the wonderful week I just spent in Turkey, that saleswoman and student were wrong, wrong, wrong! 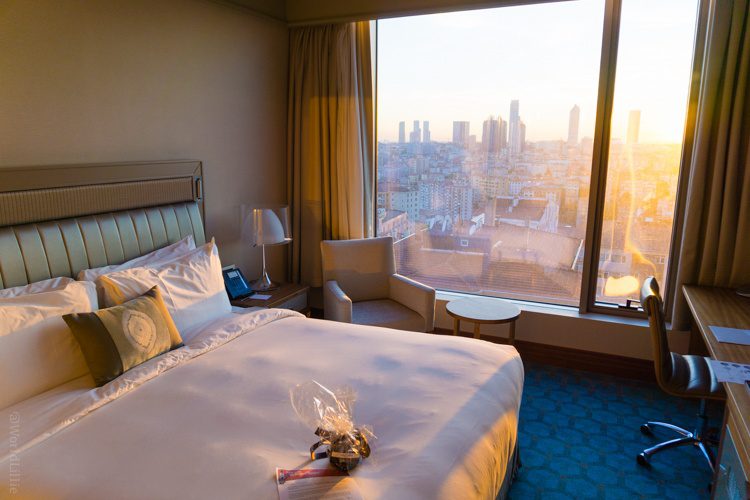 My sky-high hotel room in Turkey at the Renaissance Istanbul Bosphorus Hotel.

I just got home from the most unbelievable week of travel of my life. Along with a small group of top travel bloggers, I was invited on a complimentary tour of Turkey by the gracious people at Turkish Airlines. Why is it in the airline’s interest to spread the word about all the positive aspects of Turkey? Just scroll up to the previous paragraph for a reminder of the upsetting misinformation that is preventing people from experiencing one of the most fascinating, beautiful, and important countries in the world. 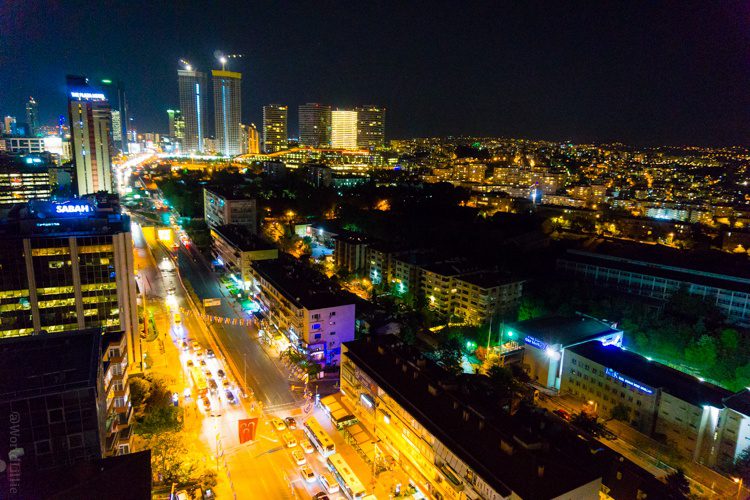 The midnight traffic in Istanbul resembles a river of gold.

I learned so much about Turkey in my week there, that after my 10 hour flight home, I battled bludgeoning jet lag long enough to compile my best photos into a presentation for my students. Today, I had a delicious day of teaching with this lesson. First, I showed the photos of the Istanbul skyline that you see here. I had snapped these photos from the rooftop restaurant where Turkish Airlines threw our welcome party. 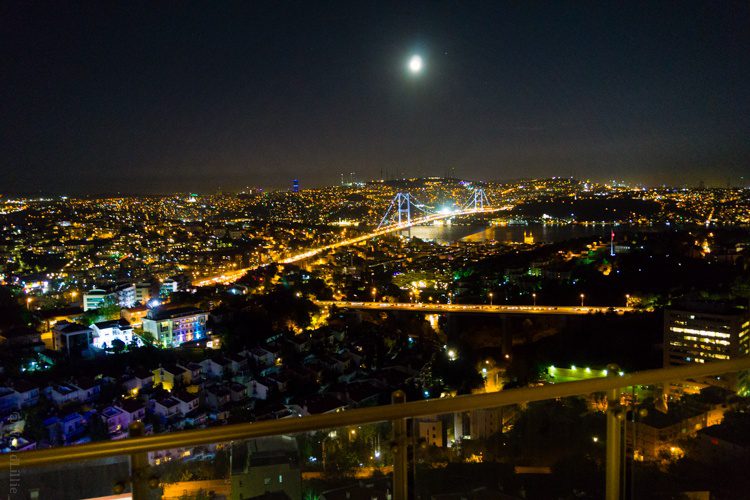 See the bridge that connects the Europe half of Istanbul with the Asia side?

“What do you notice about these photos of Istanbul?” I asked my students today.

“I’m really surprised,” each class replied. “I thought Turkey was all raggedy and desert-like. But it’s really big, and pretty, and modern!”

“Exactly,” I exclaimed. “Did you know that Istanbul has a population of 17 MILLION people? That’s double the population of New York City, and 28 times the size of Boston!” 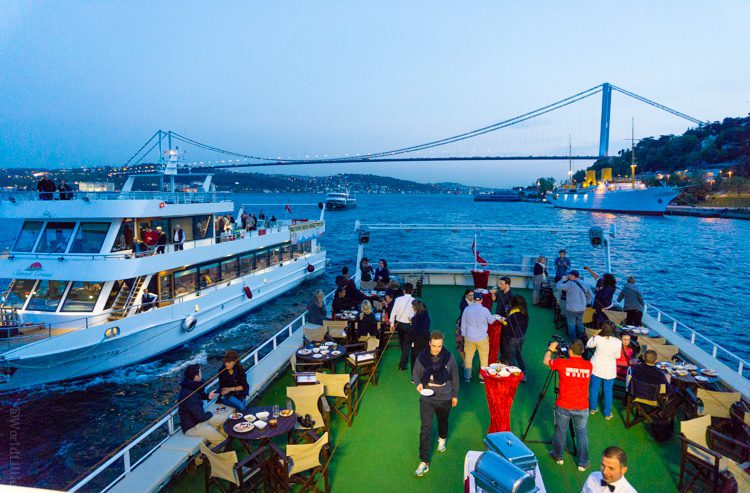 The second night, we were invited on a boat tour of the Bosphorous.

My students were particularly enthralled with the fact that Turkey lies in both Europe and Asia, and that the city of Istanbul has a half in each continent, neatly divided by the Bosphorus waterway. When they found out that we took a boat cruise through the Bosphorus our second night, they squealed. 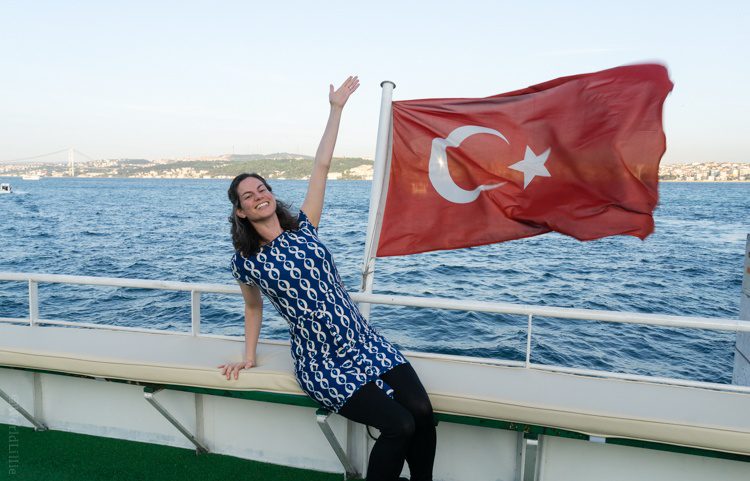 Hello! I’m on a boat in the Bosphorus!

That boat ride was a highlight of our visit, and if you ever find yourself in Istanbul (which, boy oh boy, I recommend you do), absolutely do the boat thing. There are a number of different options for all budget ranges, including a cheap commuter ferry (which we took later in the week to get famous yogurt on the Asia side). The boat in these photos, however, was a luxurious affair decked out with dinner and a sound system. As the sun slowly set, you should have seen all us bloggers racing around the ship to snap photos! 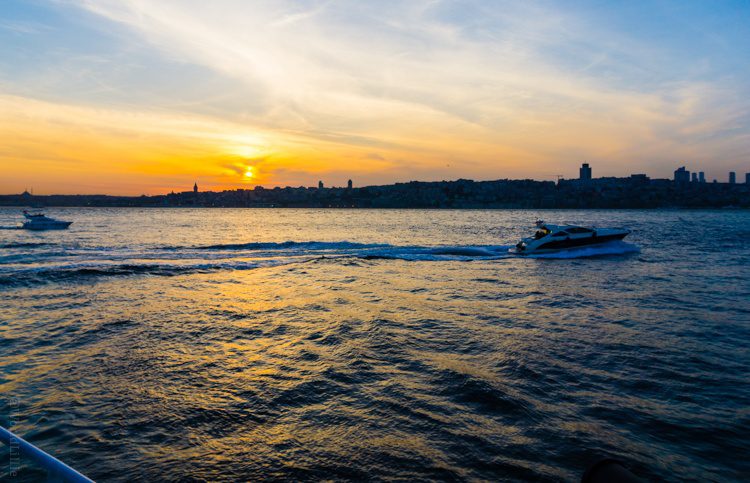 The sun began to set, and the seagulls swooped.

These liminal photos — halfway between Europe and Asia — demonstrate the geographic importance of Turkey. With one foot in each continent, and just a short plane ride from Africa, Turkey occupies a massively important geopolitical position. It is the Gateway to the West, or the Gateway to the East, depending on your point of entry. As such, Turkey has the potential to be the bridge that connects battling regions and bring peace. Perhaps this is why I felt such passion for the brightly-lit bridges across the Bosphorus: The are a glistening symbol of Turkey’s possibility. 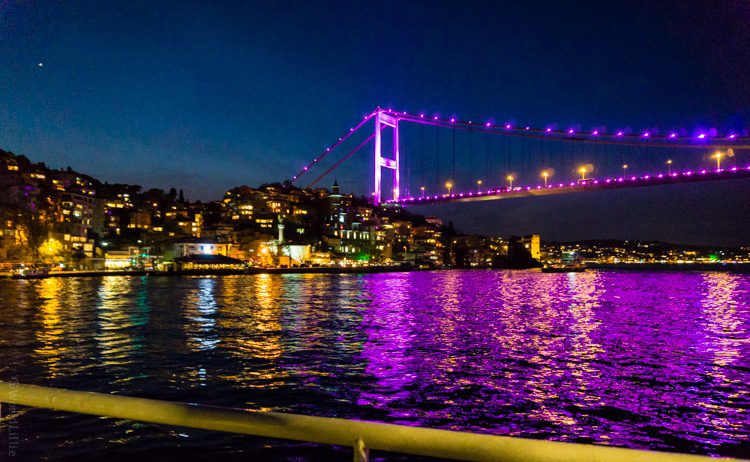 Half purple, half yellow…

Here’s a fact I had no idea about until I read the in-flight magazine (and subsequently did follow-up research): Did you know that Turkey has one of the fastest growing economies in the world? Pair this with the country’s geographical and religious “bridge” position, and you begin to see why Turkey is a rising star. 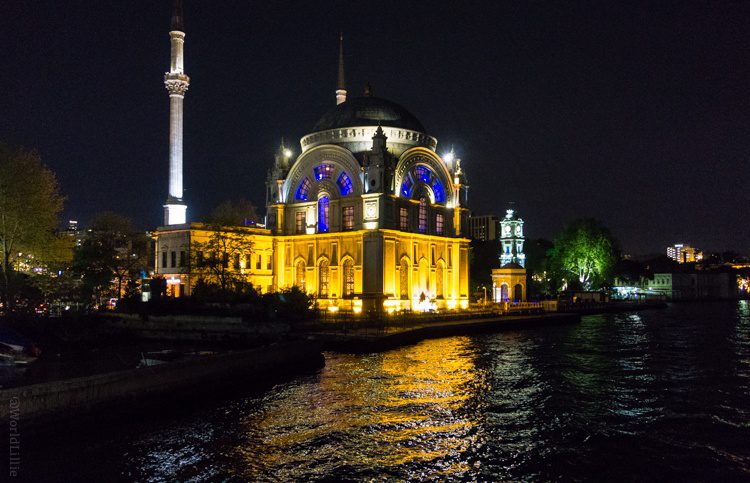 In my class, we’ve been learning about GDPs or Gross Domestic Products as a measure of a country’s wealth, and today when I projected Turkey’s GDP per capita onto the board, there was a collective: “Ooh!” at the graph’s skateboard ramp shape.

“Their economy is growing mad fast!” one girl aptly gasped. 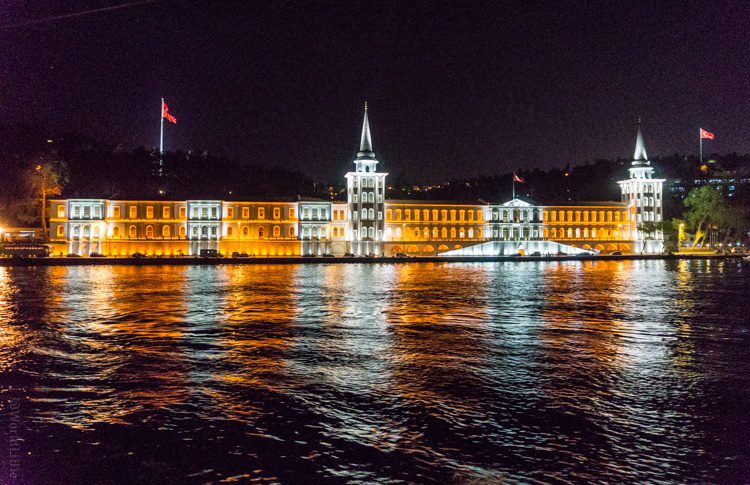 This is my #1 favorite photo of Istanbul at night that I took.

Let us move away from Economics and towards dance parties. This week-long trip was the longest I’ve been away from my baby since he was born. Though I missed him and my husband in a deep ache, I knew Devi was being very well taken care of by Colin, and so for the first time in a while, I was able to experience some nightlife again! Here is a photo of the dance party getting started on our Bosphorus boat. 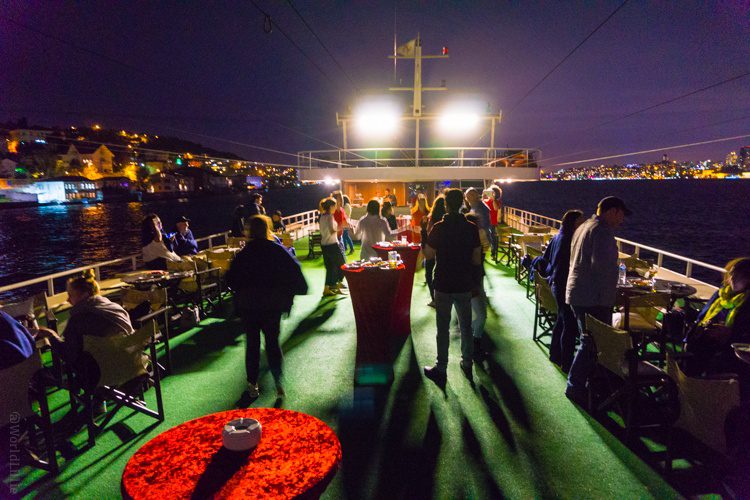 We rocked out a dance party on the boat!

I hope you enjoyed these first photos and facts from fabulous Istanbul! Stay tuned for the 15 Turkey articles I have planned out, which will be alternated with the remaining 9 articles scheduled from our Ireland trip. This melange is based on feedback from a discussion on my Facebook page, where readers said they preferred a mix of destinations versus strict chronology, as several people have Turkey trips planned for this year already! Now if you’ll excuse me, my still-in-Turkey brain that thinks it is 4:32am needs to plop into bed. More soon! 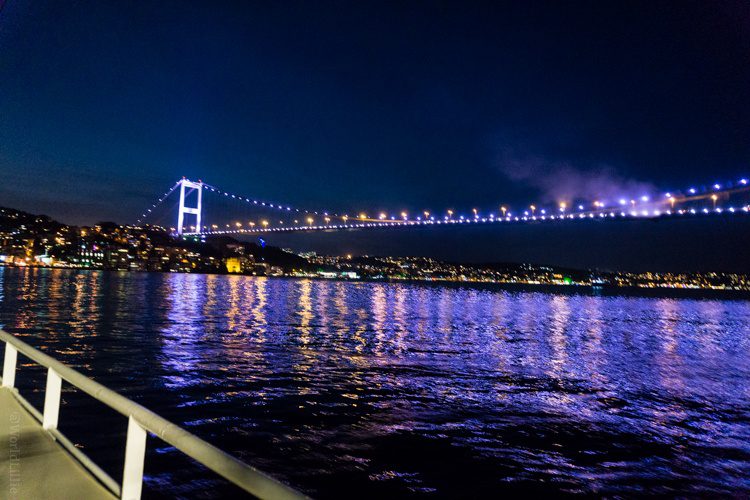 Like ships and water? Check out these photos of a boat tour I took in Thailand, a Boston Harbor Cruise, a 2-day slow boat in Laos, and a Boston Brunch Cruise! 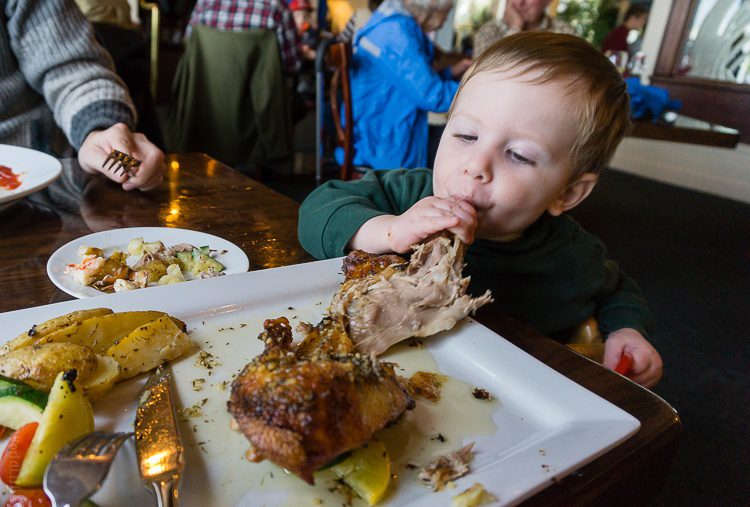 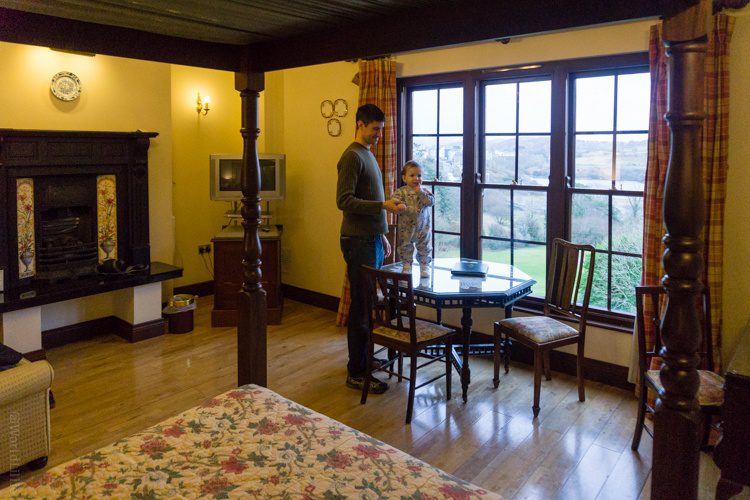 This Ireland Castle Hotel Made Us Smile and Laugh
Read Next Post →
Click here to cancel reply.

Very much picturesque presentation of the journey and the superb photographs speak as well.

Thanks for ignoring the saleswoman and the teacher's fears. We hope to go to Turkey in the near future and dive deep into all the cultural and nature offerings.

I'm a huge fan of Turkey, and Istanbul, in particular - a wonderful city. And, yes, there ARE political problems, and yes, parts of it border unsafe regions - although it's a massive country - but Istanbul is 100% worth visiting.

Wow!! You certainly have opened my eyes to Turkey! Having never been there before, despite several attempts by my partner to convince me to go, I think your beautifully written and photographed post has certainly moved Turkey higher on my bucket list! Thank you for such a wonderful introduction and immersion as well.

WOW! Loved the article with all the beautiful pictures (that I saw in class before the article was released) and amazing facts (which I also already knew about). All though I already knew about the facts and pictures, I really thought it was interesting to see them again! Just one look at this article and I already know that looking through the pictures and facts once isn't enough. I am so looking forward to traveling there when I grow up and I owe it all to you for being the wonderful teacher who showed us the beautiful place known as Turkey.