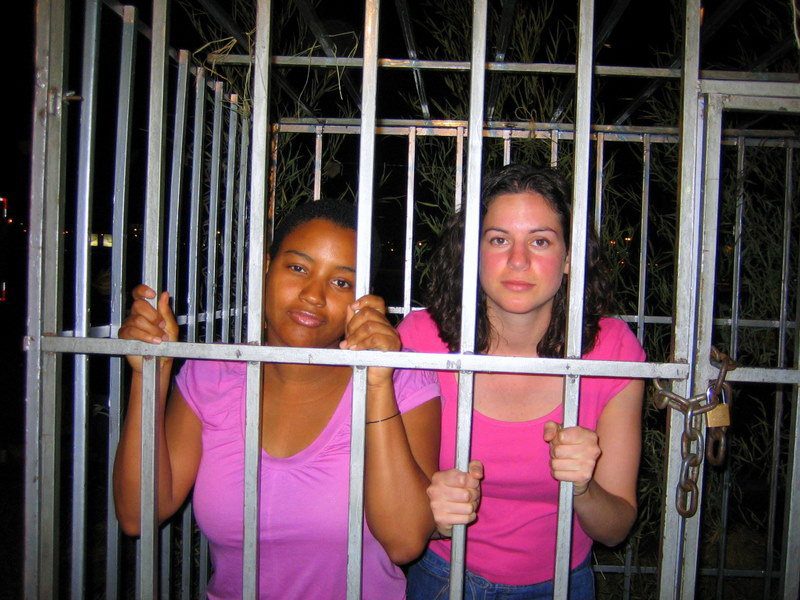 At a “Cowboy and Jail” themed party in Brazil.

That lead photo was from my first night going out in Sao Paulo, Brazil. The party my friend Marleny and I ended up at was “Cowboy and Jail-themed,” hence the fake jail.

You see, from the first day to the last day of our month-long travels through Brazil in 2005, Brazil surprised and delighted us. I simply have to write about it now, in 2012, because it’s one of the best places on Earth I’ve ever visited, so we’ve got to get it into this blog!

I was initially terrified to visit Brazil. My brother, David, had moved to Rio for a semester abroad during college, and my dear buddy, Marleny, started obsessively proposing that we simultaneously visit David and tour the country.

“But I hear it’s so dangerous there!” I protested. 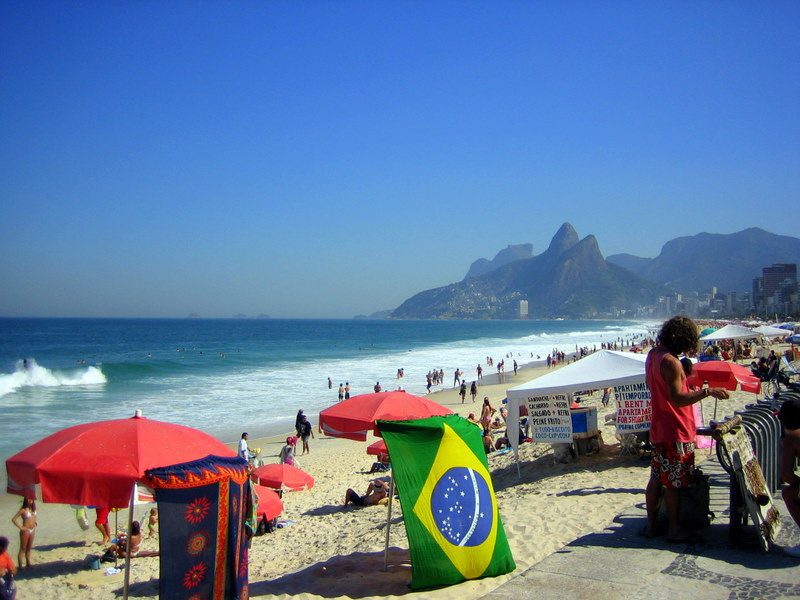 “No it’s not,” rebutted both Marleny and my brother. “It’s one of those places where, if you’re smart, you’ll be fine. Like New York!”

And thus we ended up with a raucous, ridiculously fun, and 100% safe travel summer in Brazil. We toured Sao Paulo, Rio (my favorite!), Salvador, the paradise island of Morro de Sao Paulo, and massive Iguazu Falls. Wow!

Here’s why we loved Brazil travel so much:

1. FUN. Of the 30-something countries I’ve visited, Brazil is #1 in terms of overall fun-in-the-air feeling. Maybe it’s the sun, or the smiles, or the music, or the food, or the fact that they have Cowboy-and-Jail-themed parties, but we were giddy with fun the whole time in Brazil. 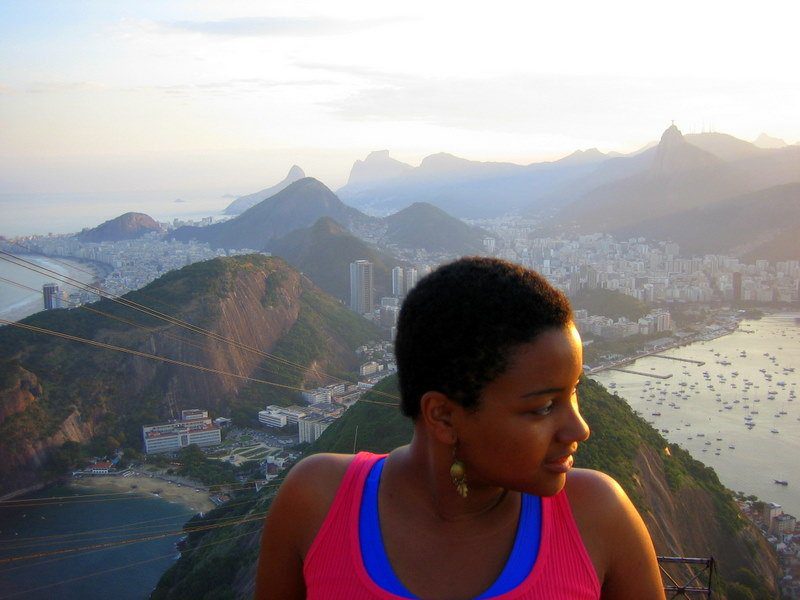 Marleny, high above the phenomenal city of Rio.

2. FOOD. Where to begin… Brazil has tons of restaurants where you pay by the kilo and serve yourself, buffet-style, from heaping piles of fresh cooking. Brazil also has the lots-of-meat-on-sticks-in-your-face deliciousness known as Churrasco. The country is also teeming with tropical fruits and berries (and their fresh juices!), from pineapple to acai.

3. VALUE. It is insane how inexpensively Marleny and I were able to live it up in Brazil. Quality backpacker hotels and hostels were abundant and cheap, food was abundant and cheap, and in-country travel options were easy and cheap… even our 15 hour bus ride to Iguazu Falls. The only problem came in readjusting back to home prices. I got so spoiled ordering $1 freshly-squeezed exotic fruit juices that, once back in the U.S., I nearly punched the clerk in Boston who charged me $6 for a “tropical fruit smoothie” from frozen fruit! 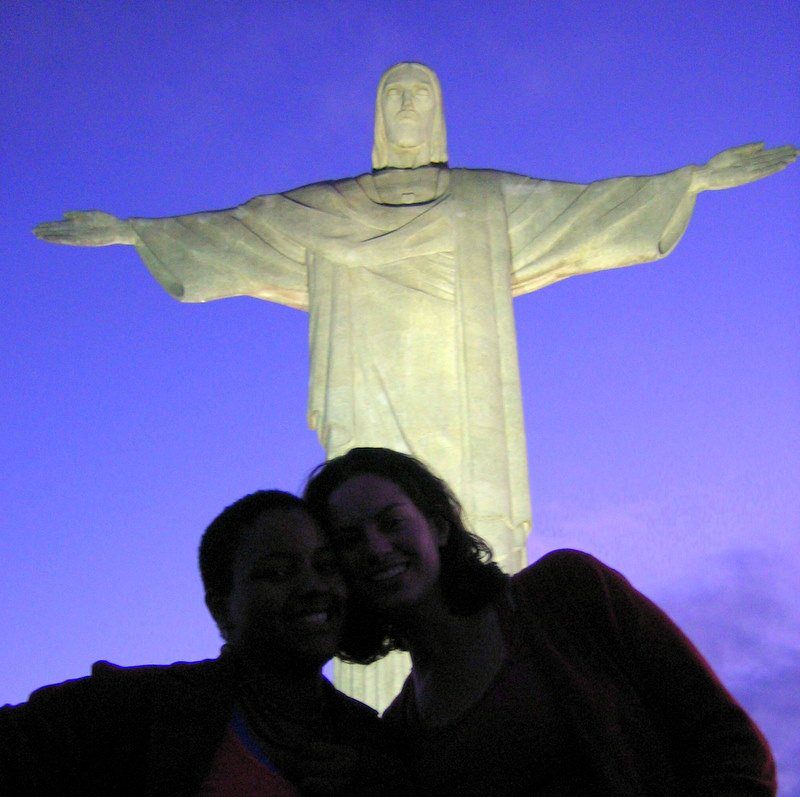 Marleny and me in front of Rio’s famous giant Christ statue.

But you really have to admit: Brazil is gorgeous, no matter what type of beauty floats your boat. I spent much of my time in Rio muttering, “How is it possible that a shopping street this chic is next to a set of mountains this grand, which is next to beaches this luscious? Zowie!”

5. FRIENDLINESS. Locals were outgoing and open, and fellow tourists were amiable and easy to connect with. We were never lonely in Brazil, with so many new friends every day. Many of them we still keep in touch with to this day!

6. CLIMATE. Since Brazil is in the Southern Hemisphere, our summer is their winter, meaning we visited in the heart of their winter… and yet the weather was perfect! 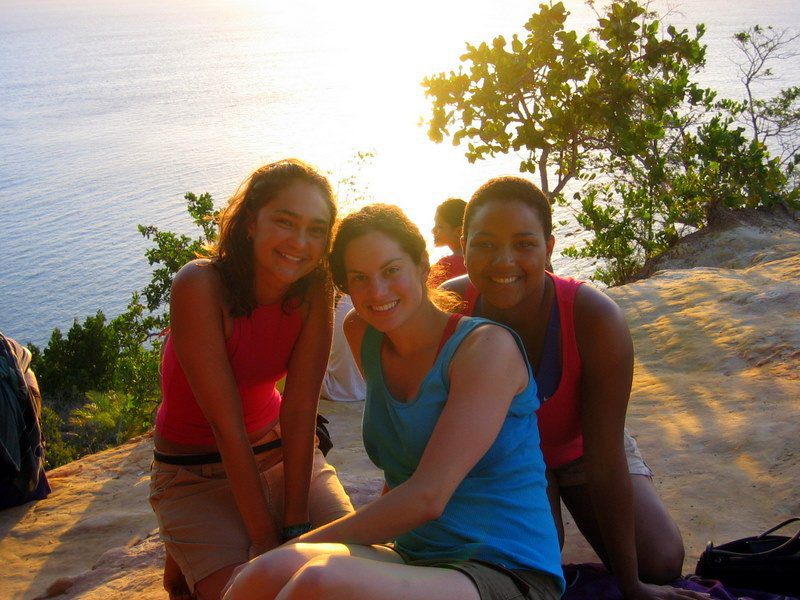 7. HISTORY. My brother wrote his Thesis in college about Brazilian History, thus giving me a taste of the richness Brazil has to offer. David explains: “Brazil’s history is fascinating and frustrating. In the words of historian Marshall Eakin, it is “a nation of paradoxes”. For one, Brazil received more African slaves than any country (8 times more than the U.S.!) and it didn’t abolish slavery until 1888.” Some call Brazil a “Racial Democracy,” while others critique its brutal history of income stratification. 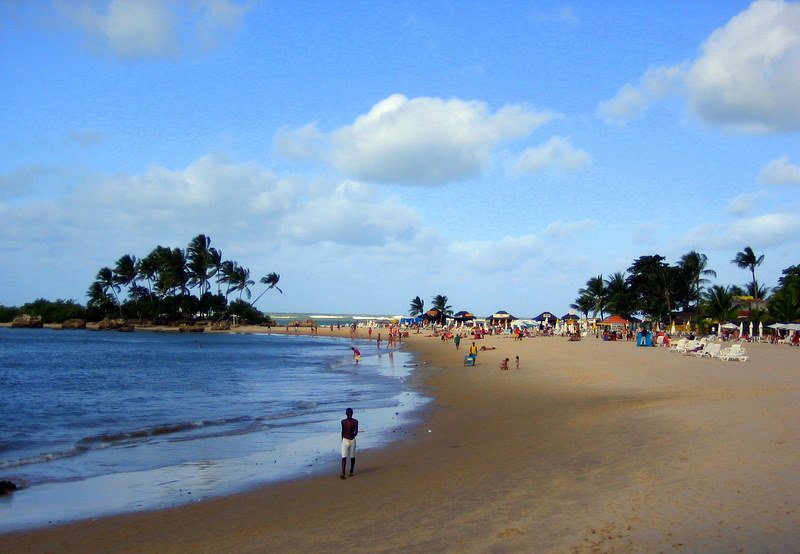 9. BEACHES. In the words of my brother, “Brazil has over 4,600 miles of coastline, meaning there are countless pristine, sun-kissed, aquamarine beaches to choose from.”

Yup! And did I mention that Marleny and I got a private room with a porch and two hammocks right on the beach in Morro de Sao Paulo for the price of a cheap dinner back in Boston?

10. DANCING AND MUSIC. I was doing a Zumba dance fitness exercise video at home yesterday, and a Samba song from Brazil came on. “Yay!” I squealed, as a flood of memories came back. There is something so fun and accessible about Brazilian music! It makes you want to join in and jump around, no matter how gangly you are. And, yes, you WILL have the song “Girl from Ipanema” stuck in your head your whole trip. 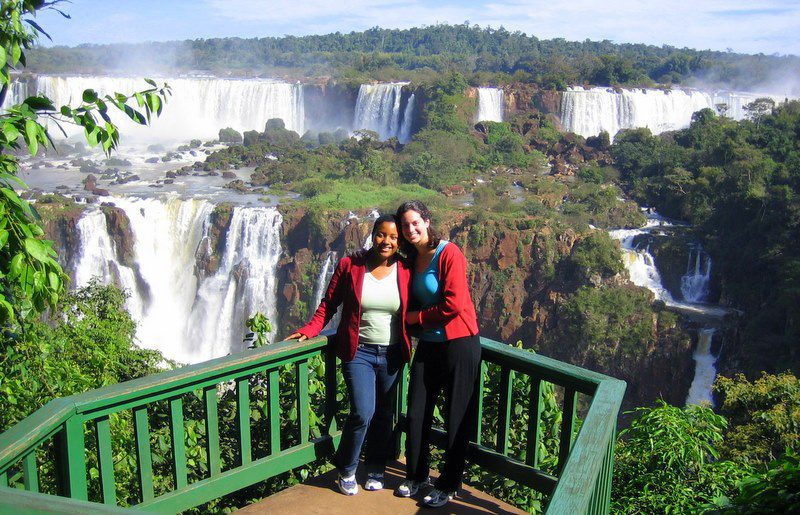 At splendid Iguazu Falls on the border with Argentina.

11. IMPORTANCE. As my brother points out, “Brazil has the world’s 5th largest population, 6th largest economy (it just passed the United Kingdom), and a land mass larger than the continental U.S.”

It’s worth it to pay attention to Brazil, because it’s important. And it’s fun!

Indeed, we loved Brazil, and we bet you will, too! 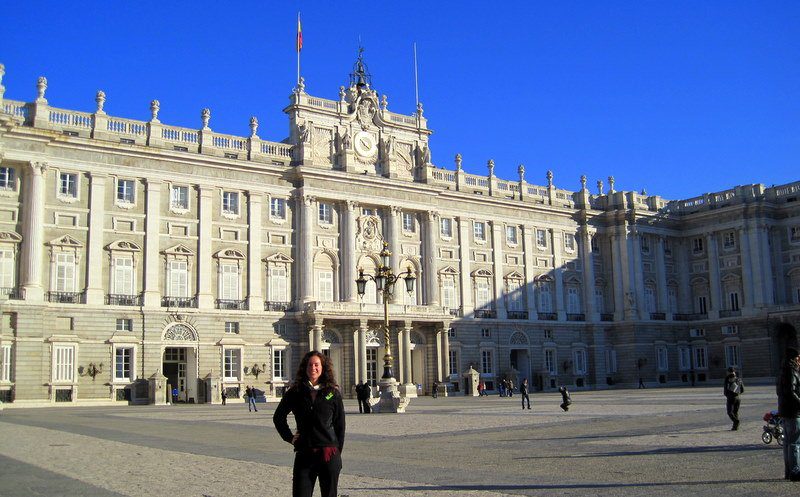 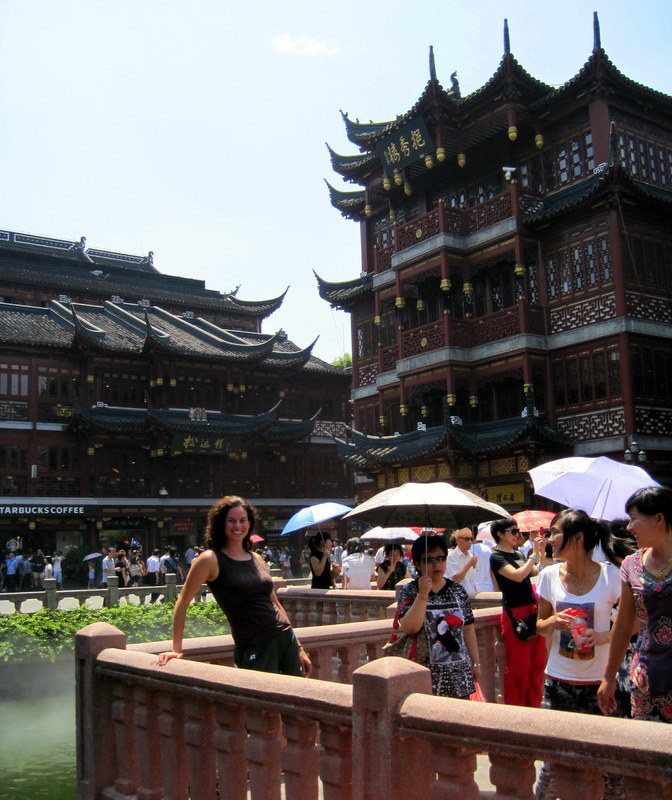 Hey, my friend and I are thinking of travelling to Brazil after our last year of highschool. How was the language barrier in Brazil? Do u speak portuguese? My friend and I understand spanish pretty well but not portuguese

Hi Eve, Thanks for your message. Exciting travel possibilities! First, please keep in mind that I wrote this article quite a while ago, so I can't guarantee it's still accurate. That said, when I was in Brazil, I did not find the language barrier an issue. My friend and I speak Spanish, and with that and English, we were able to get by no problem. There were also a lot of friendly, bilingual people who were a great help. Happy travels!

Hi! I'm a Brazilian girl and I loved your article!! Brazil has got many beautiful northeast's cities, for example : MaceiÃ³, Recife, Salvador and others. We have got SÃ£o JoÃ£o Party that's looks like Carnival or RÃ©veillon. I love this Party!!(sorry if I wrote something wrong, I don't speak English fluently). ðŸ˜

Thanks for reading the article and leaving a comment! We didn't get to the northeast, but I've heard wonderful things!

If I am planing to travel on a winter vacation and I am choosing between Brazil and China. Which country is suitable for a 20 year old guy. If I am looking for an unforgetable trip.

Hi Mo, I'd definitely say Brazil for a fun time. I found China very intense to travel in, and would be unforgettable, but also has many challenges:. Here's my article about the challenges of China travel: https://www.aroundtheworldl.com/2011/08/28/why-china-is-the-most-intense-country-i-have-traveled-to/

Wow sound amazing!.. My boyfriend's Brazilian and I will visit this year! .. And your blog is amazing!! Thanks!

And also can you please tell me the name of the place in Morro de Sao Paulo?? sounds amazing!!

Thank you! Unfortunately, my trip to Brazil was several years ago and I forget the name of the hotel. :( I'm sure there are many good options out there. Have a wonderful time!