Monkeys, Imprisonment, and a Fall at Agra Fort, India 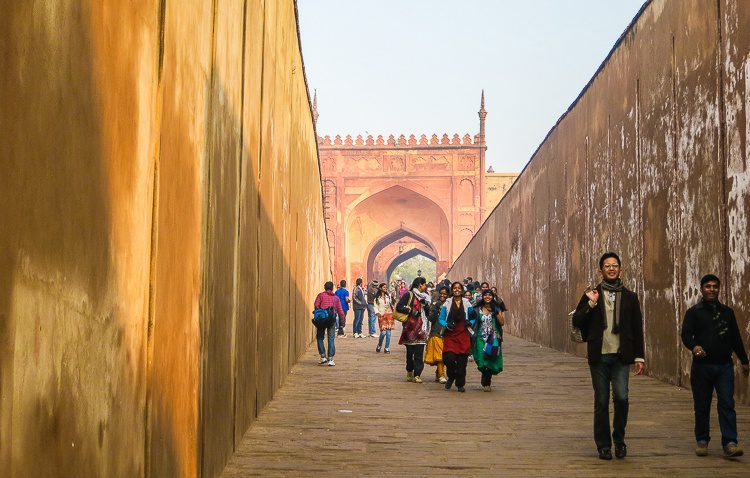 A pack of colorfully-dressed Indian students strides into Agra Fort.

“This is where they say Shah Jahan, the man behind the Taj Mahal, was imprisoned BY HIS SON.”

Our India teacher tour guide paused dramatically, and our group gazed around Agra Fort, soaking in that shocking history. 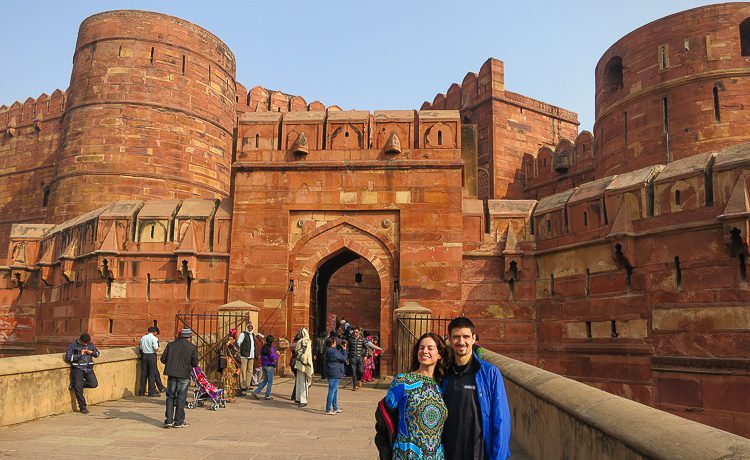 Posing outside the hulking entrance to the fort.

Agra Fort in Uttar Prasdesh, India is really more of a giant walled city than a mere fort, and each corner of it has layers of history dating back as far as 1080 CE. It also has… MONKEYS! Upon entering the fort’s hulking red gates, screeching primates bounded towards us. I clutched my husband’s hand, but my brother boldly strode forward to get a photo.

My brother getting dangerously close to monkey action.

My thoughts raced to the beach I visited in Vietnam where monkeys attacked tourists, and I hollered at my bro to step back. He took one more snap and then casually walked away while I hyperventilated, ever the protective sister. 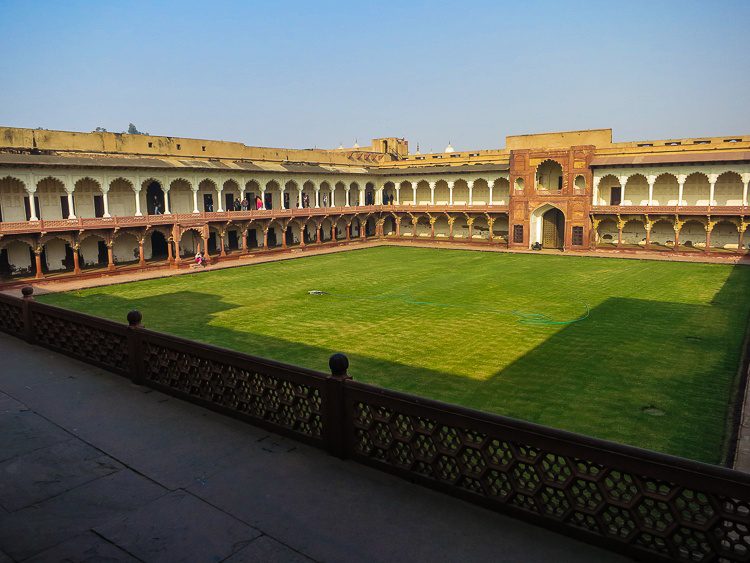 Agra Fort is giant, and has a plethora of different sections.

It took us hours to walk through Agra Fort, and each section has a different type of architecture, function, and story layers. What is the fort’s earliest known history? From the 11th century until the 1500s, the fort served as the stronghold allowing the Sultan to rule the country with Agra as a second capital. 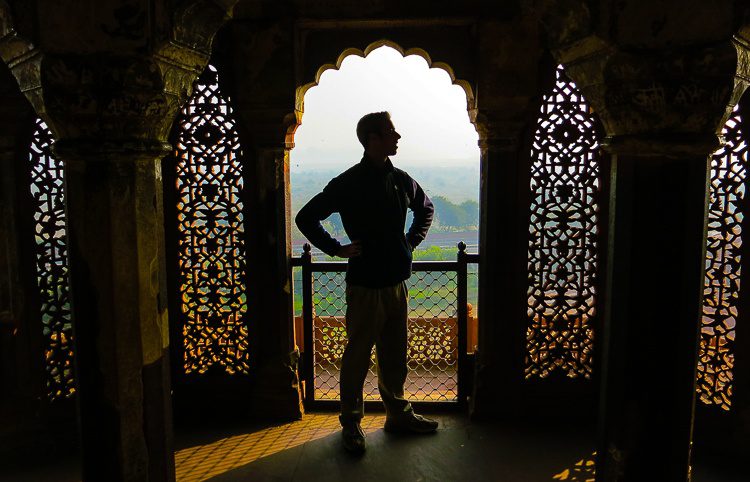 My brother, showing off his profile.

In 1526, Mughals took over the fort, which was then seized by a series of rulers and groups until famous Akbar retook it for the Mughals. Shah Jahan, Akbar’s grandson, and the man who built the Taj Mahal for his lost love, took over Agra Fort next. He did some serious interior decorating, giving whole sections of the inner buildings his ornate flair. 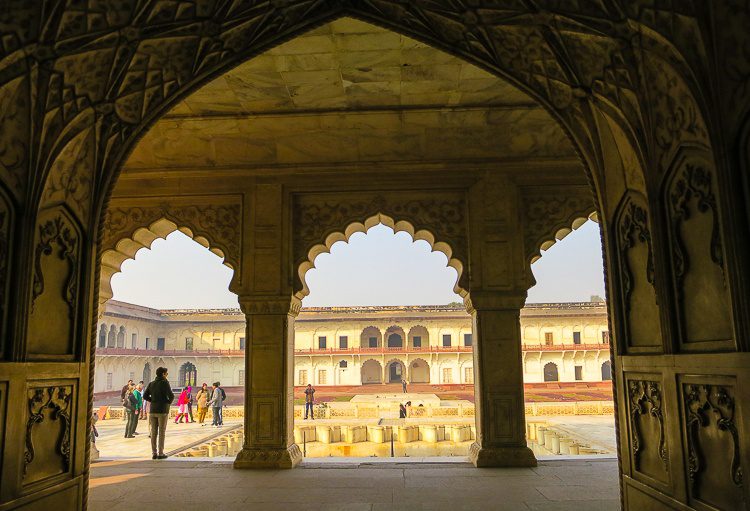 And, oh my, does Agra Fort ever have flair! In particular, I swooned at the arches looking out upon more arches upon arches. They make for some spectacular photographic angles.

My husband and I enjoyed varying our poses.

But let us return, now, to the shocking story of the son imprisoning his father. As our guide explained, the ruler named Aurangzeb locked up his father, the great Shah Jahan after deposing him in 1658 CE. But the son did not keep his father in a regular jail cell… Rather, he confined him until the end of his life, the story goes, in this gorgeous room: 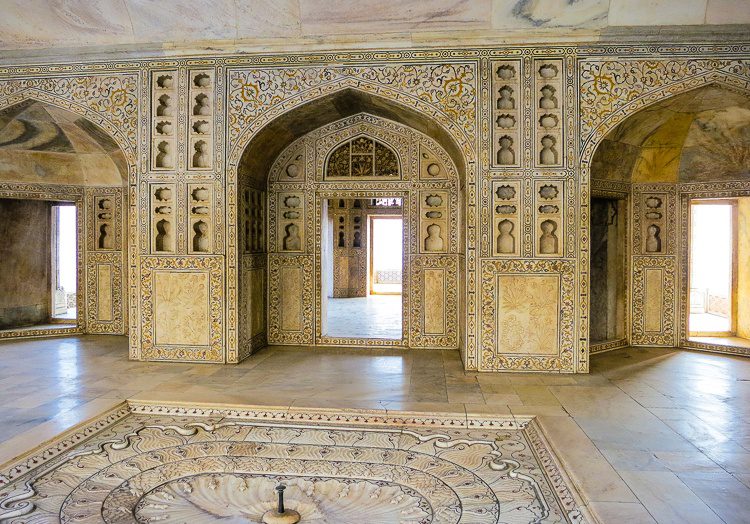 Is this where a son imprisoned his father?

Perhaps in an effort to be less harsh, Aurangzeb chose that room as the gilded jail cell because it has a view– if India’s ubiquitous mist isn’t too thick— of the Taj Mahal. In this way, Shah Jahan could live out the rest of his days a prisoner, but a prisoner able to gaze upon the most beautiful building in the world: his tribute to love. 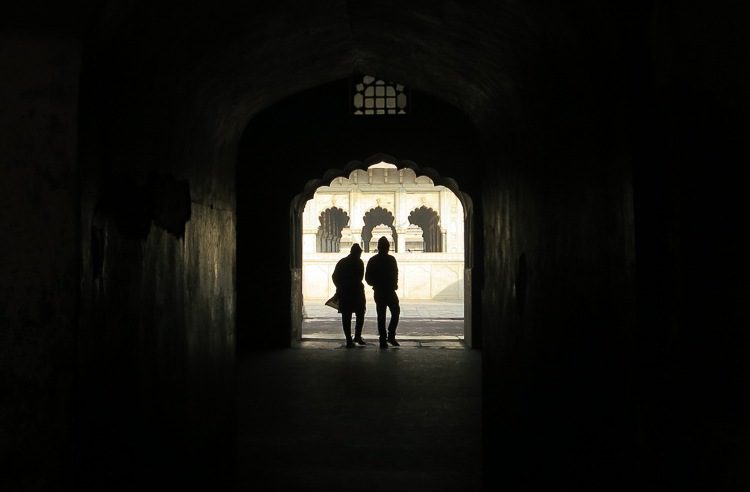 The archways at Agra Fort make for dramatic moments.

Our tour took an eerie turn after we left that beautiful prison. As our group passed a precipitous ledge at the back of the fort, we heard a commotion. Five men were standing on the ledge, looking down. As we got closer, our guide was able to translate: “They say someone fell all the way down off the edge!” 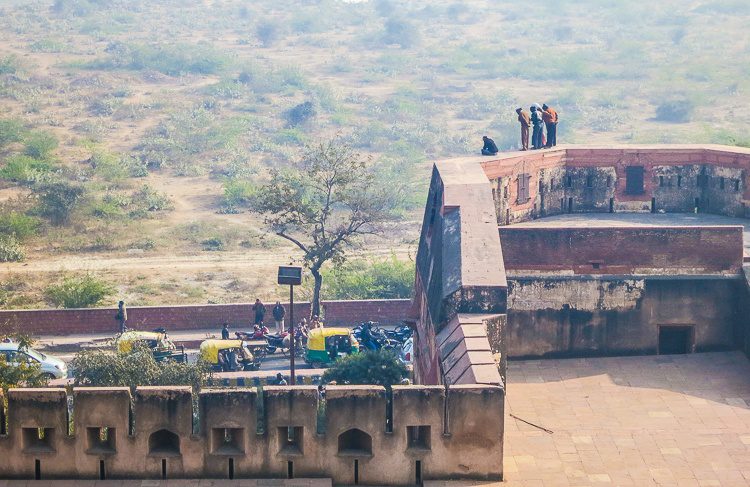 This was eerie: the men on the edge of this ledge were saying someone had fallen off.

I shivered as we watched them. “If someone already fell,” murmured another teacher on our tour, “it seems a pretty bad idea to be standing on that same ledge looking down!” 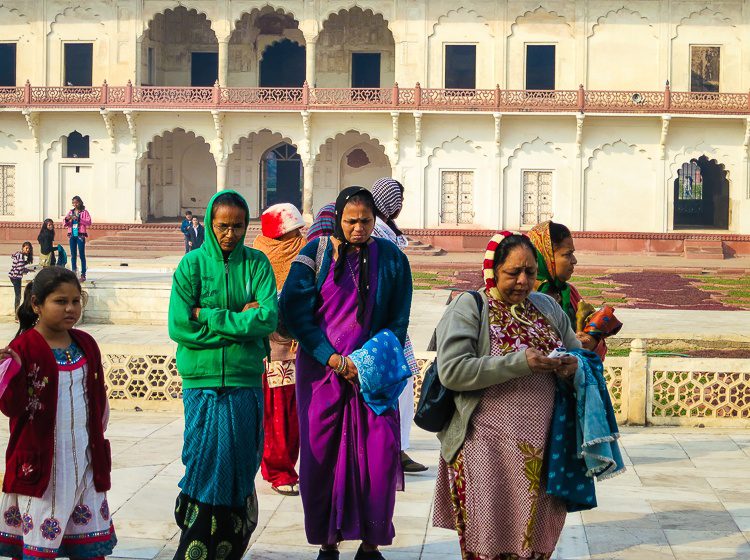 We never found out the details of the fall, but it remained on my mind as we continued the tour. I suppose by its nature, however, a fort is a place of drama and lives lost. We placid tourists are hardly reflective of the 1,000 years of bloody history around Agra Fort. 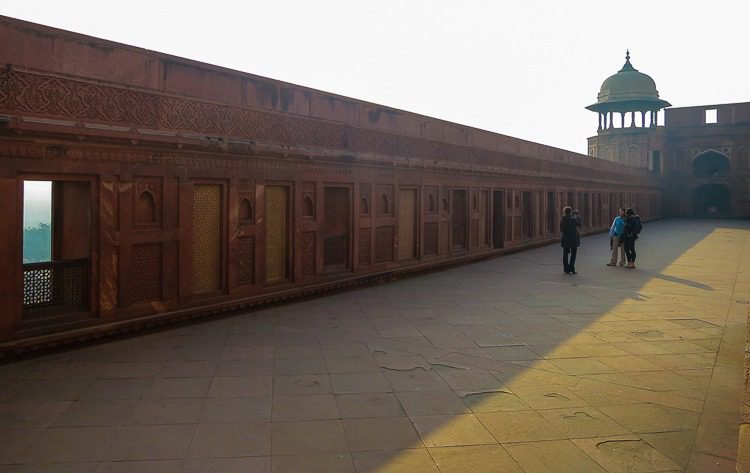 Agra Fort is so large that parts are nearly deserted.

Another echo of history– changes over history– hit me hard as we walked by the following decoration. Do you see the two symbols, startlingly placed side by side, centuries before the Holocaust gave them new meaning? 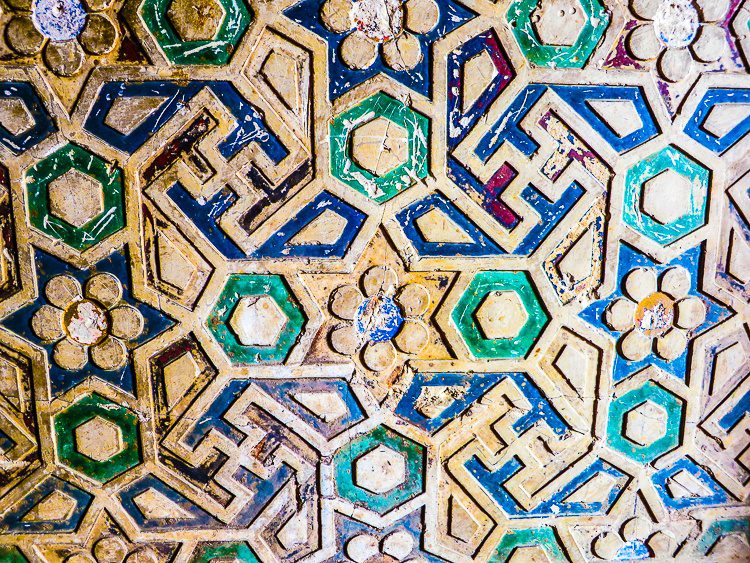 Striking how this Indian decoration contains a Star of David next to a Swastika, both with very different meanings in this context.

In another juxtaposition, like nearly every historical structure we toured in India, Agra Fort has places of worship for multiple faiths. My favorite, visually, was this mosque, known as the “Gem Mosque” or “Jewel Mosque,” and commissioned by that lover of marble and beauty, Shah Jahan. Little did Shah Jahan know that he would be imprisoned by his own son right next to that mosque.

Remove your shoes before entering the smooth white mosque.

As we headed towards the exit, I marveled at the arches stretching towards the horizon, reminiscent of a beautiful cloister I saw in Barcelona, Spain. I mused: it’s often the less famous tourist attractions that make a big impression. The Taj Mahal is just a few miles away, so far fewer people stop to think about Agra Fort, but it is a site and sight not to miss. 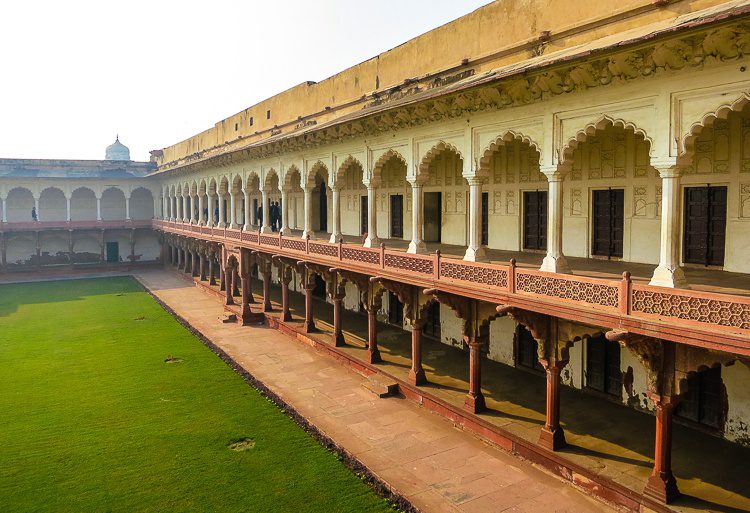 The mist made everything magical.

In closing, do allow me to leave you with monkeys, monkeys, and more monkeys. Can you spot them all? You’re welcome. 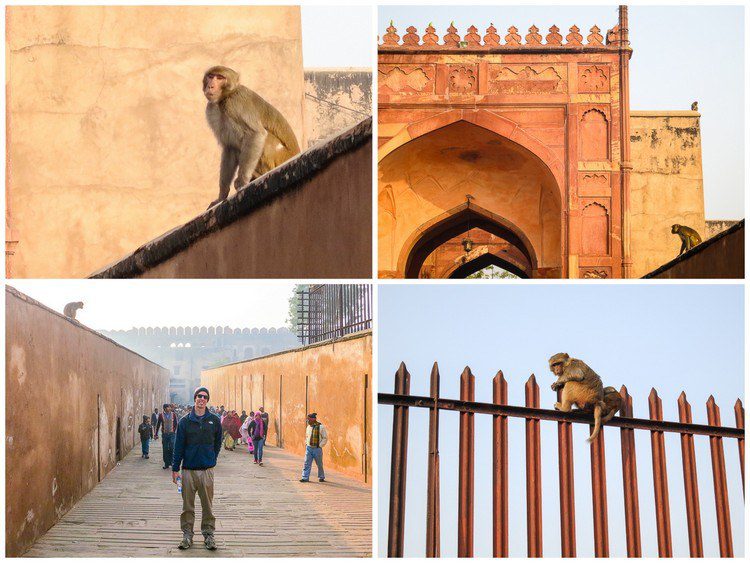 Monkeys will welcome you to Agra Fort. Do visit!

Set your Author Custom HTML Tab Content on your Profile page
Share on FacebookShare on PinterestShare on TwitterShare on EmailShare on WhatsAppShare on LinkedIn
Is It Worth It to Travel During the Low Season?
← Read Last Post 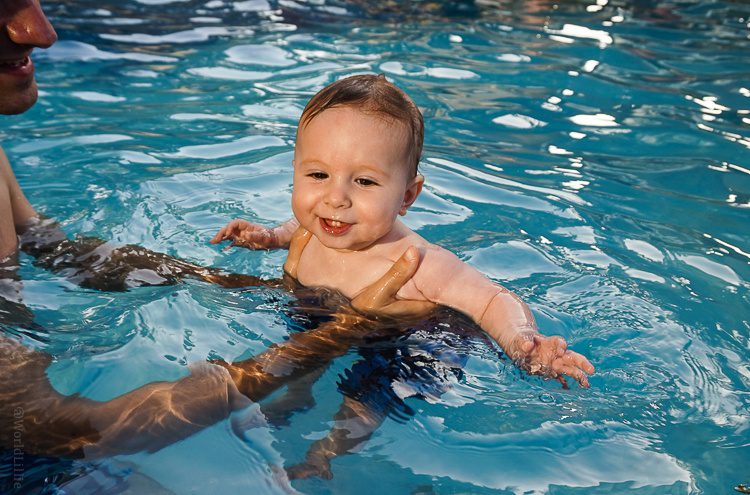 Don't go close to monkeys ..They will not harm you...If u will go close to them they will snatch ur bags n harm u as it make them feel u r going to harm them...

Thanks for the tip!

I really enjoyed reading this article and looking at the pictures. This article showed me a lot of amazing views and buildings from a long time ago in history. It also showed me monkeys. India looks like it has an amazing culture and it looks like it would be really nice to go there.

Ms. Marshall I am interested in this article because it shows a different side of India and what you could do there.

This is extremely cool. I would love to visit sometime and see where all the amazing history happened. And the son imprisoning his father is vice versa of what happened in Harry Potter. Barty Crouch sr. sends his son to Azkaban. Also did the Nazi's get their symbol from here?

What an interesting connection you've drawn! Regarding the history of the Nazi symbol, that's something to look into.

It seems as if the Taj Mahal is a place full of danger and mystery. I'm very intrigued! I would be very freighted being near that wall, as well as the monkeys. I was once attacked by turkey, so I'm definitely frightened by wild animals.