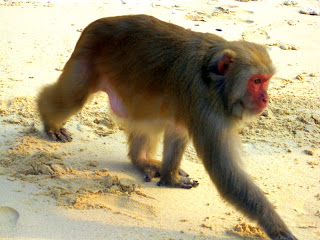 Do you like wildlife? Do you like the sea? Do you like primates hurtling at you as you try to swim in the tranquil ocean? Then head to “Monkey Beach” in Halong Bay, otherwise known as “Monkey Attack Beach”!

The last stop in our day-long boat tour of magical Halong Bay, Vietnam, was this famous beach, cradled on one of the thousand limestone islands.

I threw off my wrap and dove into the ocean, blessedly cooling after the clammy heat of the day. David, Sebastien, and Annett tiptoed towards the gaggle of tourists on the far end of the beach who were snapping photos of the bonkers monkeys.

“Eiii!” I would periodically hear from the tourist clump, the sound traveling far across the water. 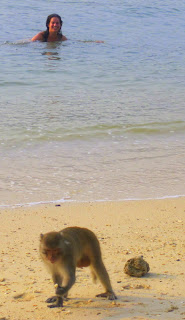 This sound arose every time (and there were many times) a monkey would catapult towards any food bits an unwise tourist was clutching.

An unfortunate Japanese-Vietnamese couple had their entire four econo-boxes of Choco-pies robbed! At first the tiny, white-cloaked woman clung to the plastic bag, but the ravenous monkey got reenforcements and the primate brigade pulled so hard the bag broke and the woman lost her day’s snacks. 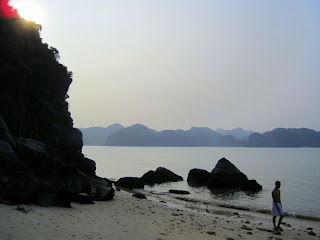 “Hehehe,” the monkeys cackled as they inhaled the crumbly cookies. Who knew monkeys liked marshmallow?

Poor, poor Annett! Just a few hours earlier she had fallen out of the kayak and slashed open her hand and side on sharp shells. At Monkey Beach, the kind German picked up a foil wrapper to throw it out and was promptly attacked by a monkey who thought she was stealing its food! The monkey chased her until she dropped the wrapper, screaming, then raked his nails across her leg in a vindictive monkey gash! Sebastian held his wounded love close and cleaned her cuts, and soon she was smiling again. German resilience. 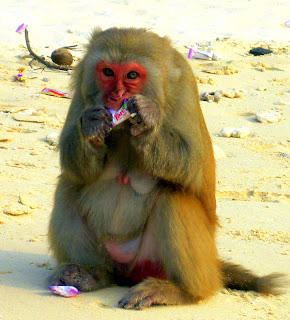 The sun lowered in the sky, and the toned bodies of tourists became silhouetted against the purple curves of the islands. 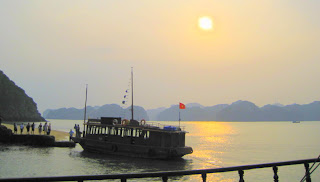 Our tourboat tooted its horn and we gathered our towels for the journey back home.

Walking to the boat, I stayed WAY clear of those monkeys!

I love you, Halong Bay, but your monkeys are nuts. :)

Great piece. Brought back a vivid memory. Got off on monkey island and a Vietnamese family thought it was a good idea to allow their 10/11 year old son get up close a personal and feed a banana to the monkeys The boy thought he would be funny and stayed messing about a taking food away from the monkeys. Mother monkey didn't appreciate the heckle and bit a big chunk out of the boys arms with instant blood pouring out. Boy screamed out. Morale don't monkey about.

Kind of happy I missed the monkey beach on my trip to Halong Bay.

I just had a friend go to Ha Long Bay and get attacked by these monkeys...haha. He came out fine in the end but when he ran away from them he ran head first into a clothes line and one of the hangers caught the corner of his eye. Could have been really bad but luckily it only broke the skin! Don't muck with primates!

Oh my gosh! So dramatic!!

oh my GOSH!! who knew? i'd be freaked out by them - monkeys freak me out, anyway. poor annett!

O-M-G! Halong Bay sounds like a really cool place, though the monkeys now kind of scare me. I must now visit Halong Bay! :)