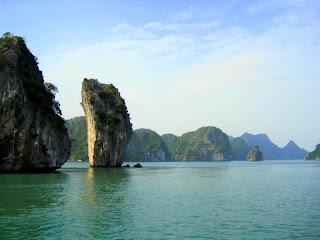 Insane, magical, breathtaking, nuts, bonkers, gorgeous– Halong Bay, Vietnam is all these things and then some.

This stunning spot is about three hours from Hanoi, and is one of the top tourist attractions in all of Vietnam. Take a one, two, or three-day boat trip through the sapphire waters between the two thousand limestone tower-islands and feel that magic “OHHH!” as the caws and shrieks of monkeys and birds echo from the jungle-hugged tops of the islands. 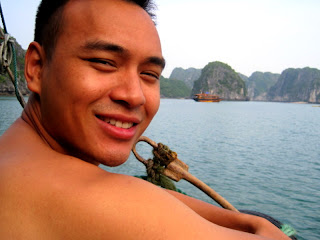 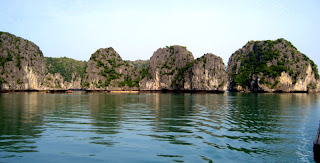 My friend David and I took the $15 boat tour leaving Cat ba Island at 8am and returning, exhausted and elated, at 5pm. In addition to meeting the coolest German couple ever, we watched the heart-stopping islands turn from purple to silver to green to blue as the sun rose, blazed, then set. We ate crispy spring rolls, squid, fried fish, and leafy green cooked veggies, kayaked into the hidden caves inside the hollow islands, got chased by monkeys on a beach, and took a boatload of photos. What a place Halong Bay is!

Let’s turn to Wikipedia for a fascinating list of Halong Bay Fun Facts, shall we? 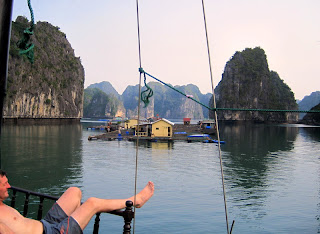 – The name “Halong” means “Descending Dragon”, and refers to a local legend that: “long ago when the Vietnamese were fighting Chinese invaders, the gods sent a family of dragons to help defend the land. This family of dragons began spitting out jewels and jade. These jewels turned into the islands and islets dotting the bay, linking together to form a great wall against the invaders.” Lovely! 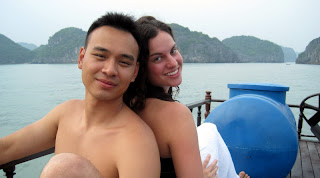 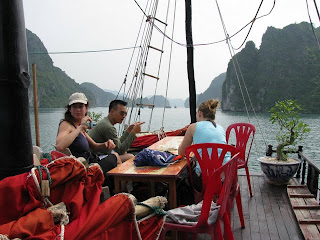 – During the Vietnam War, many of the channels between the islands were heavily mined by the United States navy. Some of these mines still pose a threat to shipping to this day.

– It took over 500 million years for Halong Bay’s magical islands to form beneath the sea and rise up into the air. Should you desire to learn the details of this ridiculously complicated process, Wikipedia has about three hundred lines dedicated to it! 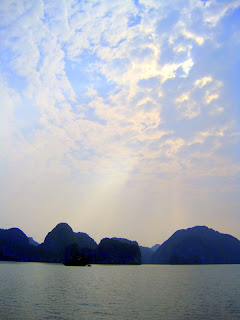 – In the 1997 James Bond film “Tomorrow Never Dies, James and Wai Lin attempt to chase down the dastardly enemy in the Ha Long Bay area. The bay was also featured as a backdrop in the video game “Street Fighter IV”. 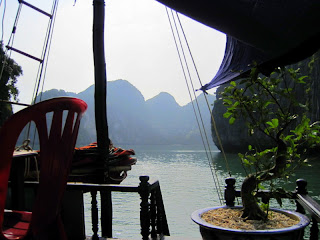 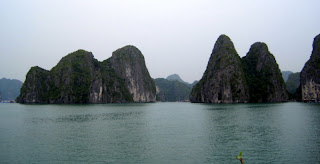 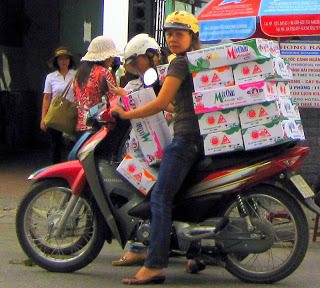 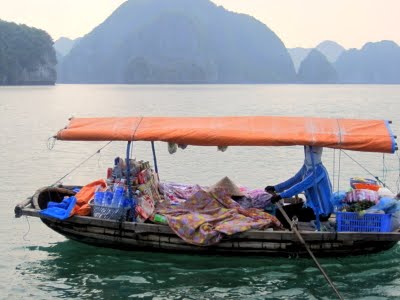 Man after reading this article I'm pretty surprised to see these facts about Halong Bay. I wish my family went here when I was going to Vietnam for a vacation. Overall I loved these pictures, they really hyped me up coming to this tourist attraction!

It's such a beautiful place!

Dave said... Sounds like paradise! I'm amazed you were able to pull yourself away after less than a day.

Luddy Sr. said... Looks amazingly beautiful for sure. I hope to see it myself one day.

megancriley said... I did a junk tour of Ha Long bay and nearly died from the diesel fumes coming out of the engine as I slept. Ahh, good old communist era engines!!