Where to Watch the Sky Near Pittsburgh

There are (watch the pun) MOUNTAINS of fun things to do in the Laurel Highlands of southwestern Pennsylvania, but few activities are as relaxing and beautiful as sitting on the giant veranda porch of the Historic Summit Inn, just an hour and a half south of Pittsburgh, PA.

History of the Summit Inn

The Summit Inn is officially labeled “Historic” for a reason. Built in 1907 as a place for weary early-model cars to rest between mountain summits, it became a playground for the millionaires who glistened around Pittsburgh in the early 1900s. Wait until you hear what mischief they got up to…

“The Four Vagabonds” Going Wild at the Inn

Now, when we say “history,” it turns out that the historic nature of the inn is more spicy than imagined. Starting in 1914, the automotive and inventor millionaires Henry Ford, Thomas Edison, Harvey Firestone — plus their naturalist friend John Burroughs — began taking yearly vacations together — followed by reporters who were hungry to document the antics of these celebrities. In 1918, their travels took The Vagabonds to the Summit Inn… and hijinks ensued.

Like, seriously wild hijinks ensued — from these illustrious men who invented the Model T car and lightbulb and automobile tires. Here’s an example: a the Summit Inn, the Vagabonds challenged each other to a contest for who could JUMP DOWN THE MOST STAIRS at once. I got to walk on that same grand staircase at the hotel, and here it is, so you can really visualize the boisterous game these fellows got up to:

Who Won the Stair Jumping Contest?

How did the stair-jumping contest go? According to the Pittsburgh Post-Gazette, (I swear I’m not making this up — it’s verified), Edison could do the entire flight stairs in “three hops,” Henry Ford did it in two (?!) and Burroughs fell so spectacularly that he had to be saved by onlooking guests. I don’t know about your history book, but mine never got into this juicy gossip.

Historic Mementos Remain in the Hotel

The Vagabonds didn’t just jump the stairs at the Summit Inn in 1918… they also had a contest where they took turns trying to kick a cigar off one of the 6-foot mantels. This was documented by reporters and ogling guests (I sure would have ogled, too!) and yes, it really happened. Even today, the hotel is chock full of historic memorabilia, including mementos from the Vagabonds’ visit.

In many ways, the Historic Summit Inn reminded me of the Red Lion Inn in the Berkshires, MA, or the Woodstock Inn in Woodstock, VT with how each corner is full of mementos and unique decor. The key in appreciating historic hotels is to understand how it differs from non-historic hotels. Let me explain a bit more.

How to Get the Most Out of Historic Hotels

For the most part, you don’t visit historic hotels for sleek and shiny 21st-century luxury. You don’t pick a historic hotel if you want five iPhone outlets next to your bed, or window shades that go up and down at the touch of a button. Rather, a historic hotel is best appreciated for its layers of quirky stories and decorations that have built over the decades, and for its particular version of luxury which often hinges on a timeless element like the Summit Inn’s mountain-view porch. Looking at TripAdvisor reviews (click this affiliate link here to see) you can see this play out.

Eating on the Veranda Overlooking Mountains

I absolutely loved the covered porch overlooking the Alleghenies: the hotel’s restaurant, perfectly named “The Veranda.” Though the eatery is popular and can get crowded, we arrived right when it opened for both nights of our stay, and were able to enjoy the best seat in the house for our shrimp cocktail and salmon. (A sort of comfort version of luxury food!)

Sunset on the Upper Porch

After dinner both nights, we walked up a flight of stairs (not the ones Henry Ford leaped down) to the platform porch pictured below. As our guide at the Touchstone Center for Crafts blacksmithing exhibition explained, “Few things are better than sitting on that porch with friends on a summer evening, watching the best sunset in Pennsylvania!”

Indeed, both nights, we were joined by a joyful crowd on that sunset-watching porch: a mix of visitors and locals. The mood was friendly and awe-filled about the glory of nature. There was a bit of a scramble for who could get the pretty white wooden chairs at first, but one woman kindly offered me her seat when she saw me squatting (little knowing it was part of my exercise routine!), mirroring the overall camaraderie of the crowd. I can imagine that if I lived in the area, I’d be on that porch as much as humanly possible.

Just a five-minute drive from the Summit Inn sits an attraction you cannot miss if you’re in the area: Laurel Caverns, the largest cave in Pennsylvania. The upper section of this underground labyrinth can be safely done in under an hour with no special equipment, and is beautifully lit with colored lights. (Click through that link to see!)

I will never forget staying in a place with a view so remarkable that literally all we needed to plan for our evening entertainment for two nights straight was: “Sit on the porch.” So what about you? If you’ve stayed in the Historic Summit Inn, how was your experience? If you haven’t been, how does it seem? Do share!

We were guests of the Summit Inn and GO Laurel Highlands, but all opinions are my own. 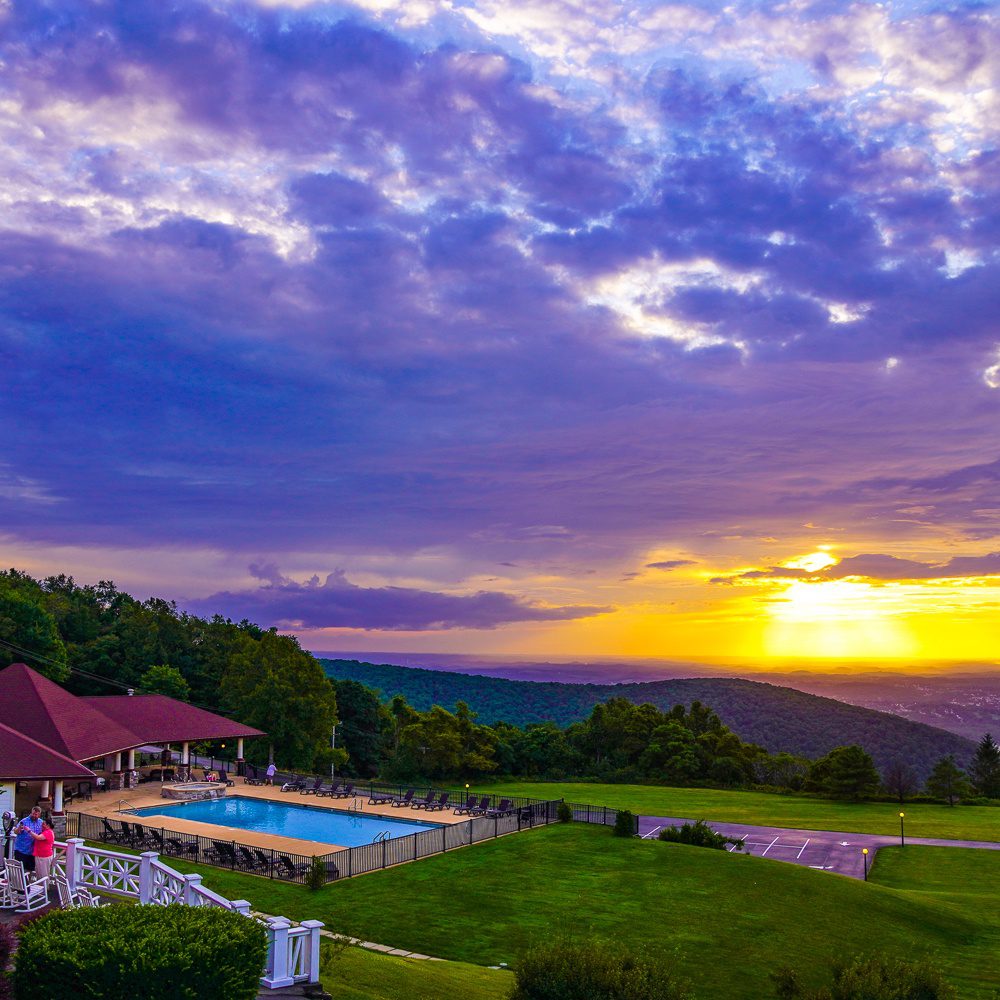