Learn to Be a Blacksmith!

Nestled in the bucolic Laurel Highlands of southwestern Pennsylvania sits one of the best places to learn blacksmithing in America: Touchstone Center for Crafts in Farmington, PA. Now I confess that despite being an artist, myself, I’ve never given much thought to blacksmithing; I’ve strolled by countless ornate iron fences with nary a care for how they were created — until last week.

For All Levels and Backgrounds

My obliviousness changed to awe on Wednesday after experiencing a live blacksmithing demonstration at Touchstone. Happily, I’ve videoed and photographed all the hammering and sparks so YOU can get a taste of the wonder, too.

Whether you’re a seasoned blacksmith, someone intrigued to learn the craft of metal forging after watching the show “Forged in Fire,” or a person who, like me, has been blind to this art, I urge you to take a moment to scroll this article. It will change how you see the world — and all the metal in it!

Our guide for the tour (featured in these photos) was 20-year-old Erick Castrejon: Touchstone‘s Studio Assistant Intern in the Blacksmithing Studio for the year. Erick’s story is a remarkable one, and demonstrates the power of Touchstone’s offerings — and the indomitable spirit of a born craftsperson.

Growing up in Waukegan, Illinois, Erick taught himself blacksmithing by finding online video tutorials, since he couldn’t find any blacksmiths in his area. Soon, he had a problem: no access to a forge. Blacksmithing materials can be prohibitively expensive, and forges even more so. How would he surmount this obstacle?

Undaunted, Erick looked up internet tutorials on how to create a makeshift metal-melter OUT OF A LAWNMOWER. Yes, you heard that right: an everyday lawnmower can be turned into a blacksmithing forge. The experiment worked, and Erick began to salvage metal that was being thrown away — turning it into beautiful and functional projects instead.

Erick knew he wanted more training than online videos and Frankenstein lawnmowers could provide, so he began searching for opportunities. Much was Erick’s elation when he discovered the Touchstone Center for Crafts 10-to-25-week internship program — available for a wide range of arts, blacksmithing included!

Erick applied and was accepted. He packed up and moved from Illinois to a cabin in the woods in Farmington, Pennsylvania… and began work in one of the most incredible blacksmithing workshops in America.

I didn’t know a thing about blacksmithing when I walked into the Hart Moore Blacksmith Studio at Touchstone last week, but WOW did it knock my socks off anyway. You don’t need to understand much about the craft to comprehend that Farmington facility is world-class — AND it has a heart and funny bone. Let’s take a tour!

Touchstone’s blacksmith studio is FIVE THOUSAND square feet: 100 feet long and 50 feet wide, with four 8-foot-wide doors on each side for ventilation. Every few feet, neat rows of every tool imaginable are on display. There is also a 2,000 square foot class and museum space next to the main building. What?! Abundance!

For the many blacksmithing classes that take place at Touchstone during the year, the studio offers TWELVE student forges. (Fun fact: In West Africa, forges have historically been considered female, and the blacksmith seen as the “spouse of the forge!”) In the photo below, the tin can in the lower right corner is an additional mini-forge created by one of the studio interns to make tiny metal jewelry. Such creativity!

Let us pause this educational tone to bellow in a deep and dramatic voice that Touchstone’s blacksmith workshop has a GIANT BLUE POWER HAMMER (pictured below) which makes a tremendous and stupendous “BAM, BAM, BAM” onomatopoeia sound as it slams into the metal! Make sure to play the video embedded in this article to see Erick putting this beast to work on his bottle opener project.

Imagine what it must feel like to go from makeshifting one’s own forge out of a lawnmower, to walking into a blacksmithing studio with literally every blacksmithing tool ever invented — times one hundred. What a mental metalworking juxtaposition! Gaze at my photo below, which shows a mere one of the countless shelves in the workshop. Want a “Rivet Header” or “Monkey Tool?” Here’s a tray of FOURTEEN!

Hoping for more tools? Below is a photo of the Fabrication Room where there are various welders and angle grinders, and a drill press for all your hole-boring needs. Notice how each tool has an educational sign upon it to assist in the blacksmithing education? So helpful.

Time for a sparkly orange fireworks show! Make sure to watch the embedded video footage of Erick putting this belt sander (pictured below) to work in whittling down the metal of a new, artistic knife. I was nervous the entire time that he’d sand off a fingernail, but his digits remained blessedly intact.

Though Touchstone’s blacksmithing studio is chock-full of state-of-the-art equipment, the space exudes a deep honor for the centuries-long history of the craft. In part, it demonstrates this honor through showcasing vintage blacksmith tools. (Side note, if you like historic things, check out the shocking collection of vintage bikes in nearby Pittsburgh’s Bicycle Heaven.) Below, behold the studio’s foot-operated antique Bradley power hammer from 1880 (!!!!) which actually still works.

Speaking of vintage equipment, let’s take a brief backtrack to marvel at the long history of blacksmithing. Working iron (“black metal“) dates back over 3,000 years, as evidenced by found Hittite tools made of smelt metal from 1500 BCE. That knowledge was spread to start the Iron Age between 1200 and 600 BCE.

Though blacksmiths are often pictured in Medieval Europe hammering horseshoes and weapons, or in the Industrial Era and 20th century in America crafting elements of architecture, many people forget that there is an illustrious history of blacksmithing on the continent of Africa which in several aspects predates European technology. (See this exhibit for more on this fascinating topic.) Nowadays, Blacksmithing is experiencing a revival, as craftspeople around the world are recognizing its magic.

No discussion of blacksmithing is complete without bowing down to the essential elements of the trade: the blacksmith hammer and anvil! First, let’s discuss hammers. Though it is indeed a workout to pound the metal by hand, it turns out that you don’t need to be as burly a beast to wield the tool as I thought. Touchstone’s staff explained that plenty of effective blacksmiths in their studio are petite in frame. The key is correct technique — and fire, of course.

And what of the anvils? Am I the only one who immediately thinks of the Bugs Bunny cartoons where anvils are dropped upon the heads of nemeses, willy-nilly? Well sheesh — now that I’ve seen what hulking pieces of metal anvils are in real life, I’m not so sure those cartoons are funny anymore. Let’s keep the anvils for crafting purposes only, shall we? Not to bop heads.

What can one make with steel, iron and a forge? The possibilities for blacksmith projects are more vast than I could have imagined. Take, for example, these delicate-looking metal leaves, below. Each ridge required melting the metal to a molten state, then smashing it juuuust right with the correctly-shaped tool. A truly complex feat to forge these firm yet feathery fronds!

In the attached video, you can see Erick making his latest project: a leaf-shaped bottle opener out of metal. (Well, he works on numerous projects at once, which he rotates between as the metal for each heats up, but let’s focus on the bottle opener for now. I will mention, however, that he’s also making an adorable teeny-tiny hammer. Yes blacksmiths can make their own tools — very meta.)

To make the shape pictured below, Erick took a flat shaft of steel, heated it in the forge, hammered it to a pointed shape by drawing it down, then notched and separated the leaf head from the flat stock of steel. He then pounded in a hole, and began contorting the shape into the graceful, organic-looking result. Zowie!

If you want to learn more about blacksmithing classes at the Farmington studio, see the full, updated workshop listing here — including the glass making workshop we also did. Thank you to Touchstone Center for Crafts and Erick for a remarkable, eye-opening visit! For those of you reading, what are your reactions? If you have a background in blacksmithing, what do you notice or think? For those of you who don’t, did this change your perspective? Do share!

I hope you’ve enjoyed this peek into the loud and luscious world of this historic craft, whether or not you ever make it to blacksmithing classes at Touchstone. If, however, you do find yourself in the Laurel Highlands near the studio, I’d be remiss if I didn’t recommend the following attractions:

If your whistle is now wet for more crafty fun, check out my compilation article, “40 Art Prompts,” which features such hits as “Make Your Own Lantern” (using old soda bottles, not metal — don’t worry), “Historic Quilt Patterns,” the Alabama surprise that is “Lowe Mill: Studios for 250 Artists,” and photos of stunning metalwork in Fishtown, Philadelphia. Craft on, friends! 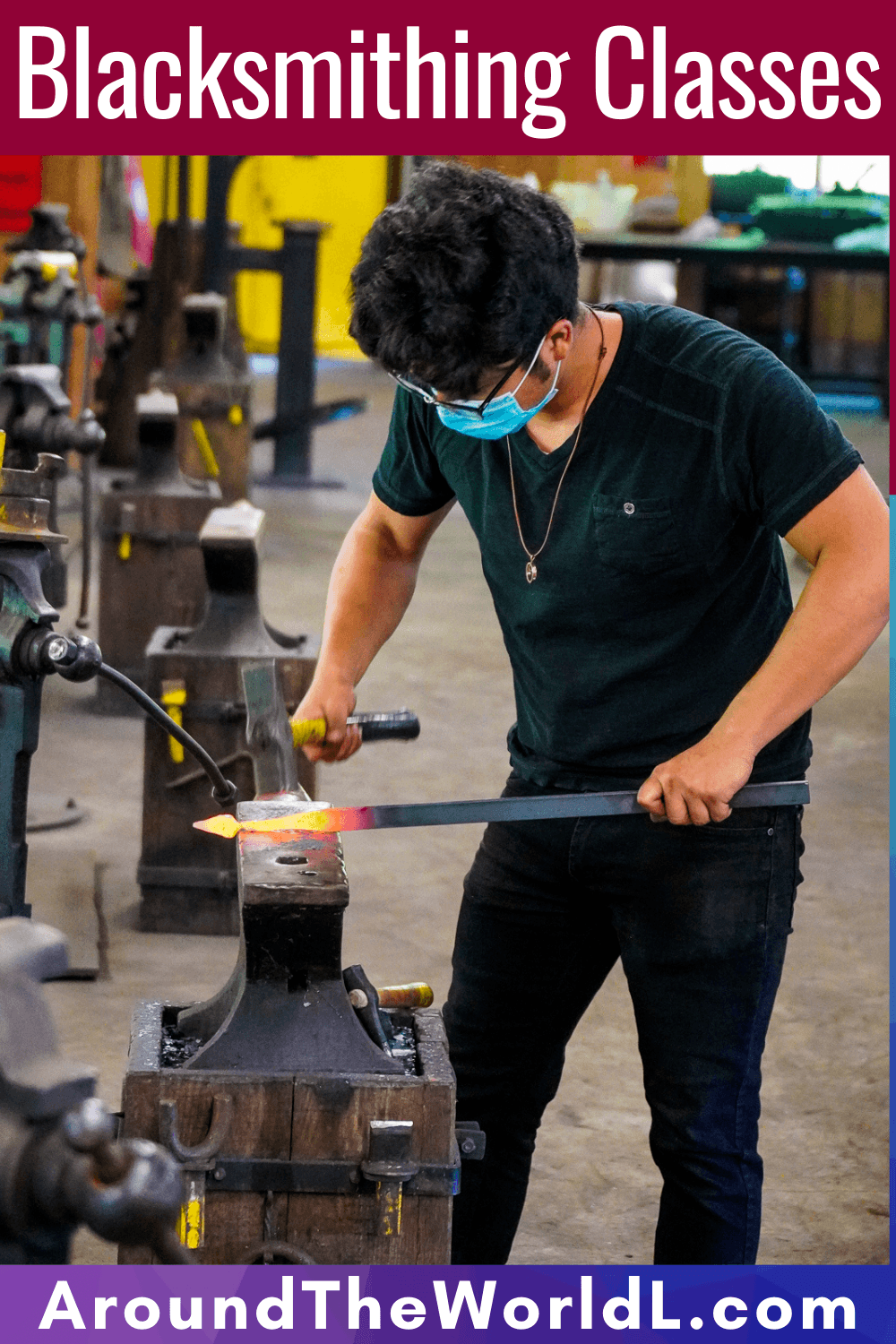 You're welcome! It was quite the task to narrow down the photos from all the cool ones from the tour!

It was so nice to meet you during your visit to Touchstone! Always enjoy showing people around the studios, galleries, and campus. Amazing how much you learned about blacksmithing during your short visit. Hope you visit again soon!

Appreciate the tour so much, and deeply inspired by what Touchstone offers. Stay tuned for more articles on it...

What a fascinating experience! I'd love to see this in person

I never would have thought to find it if it weren't for a tip from the GO Laurel Highlands visitors' bureau!

How cool to see, so far I've only seen it happen on (medieval) fairs. But a blacksmitting classes school specifically for it must be great to visit.

Now I'm intrigued to check out Medieval fairs! (Or is it "faires?")

Learned so much about blacksmithing in your article! Touchstone is a great place to try out a new craft or hobby. I’ve been to a few date nights and always had a great experience. Staff is amazing and the atmosphere brings out your creative side.

It's wonderful that Touchstone offers so many different types of workshops, date nights included. I'm working on two other articles about the place, and will expound more on that element!