When you drive by the scenic mountain that houses Laurel Caverns in southwestern PA, a small entrance building is the only hint that directly below stretch over FOUR MILES of underground passageways! These epic caves are just an hour and a half south of Pittsburgh, in the Laurel Highlands of southwestern Pennsylvania — and the photos you’re about to see of them will knock your socks off.

The Largest Cave in Pennsylvania

Nestled near Hopwood and Farmington, PA under Forbes State Forest, Laurel Caverns is a mass of superlatives. Not only is it the largest cave in Pennsylvania by volume, but it’s also the largest sandstone cave IN THE WORLD, and the largest bat hibernaculum in the northeastern United States. (Don’t worry — the bats are away during tourist season.) Whether you are planning a visit to the caves, yourself, or just want to take a virtual walk through this subterranean wonderland, prepare to be awed by Laurel Caverns. Every turn brings surprises!

I grew nervous as we approached the mouth of the caves. According to the official history of the caverns, in 1802 newspapers reported that two local men became lost in the caves for THREE DAYS — thankfully rescued while still clinging to life. Gazing at the paper map of the caves we were handed upon entering, I could see why: the caverns stretch on for miles: twisting, diverging, and winding.

A Safe Walk Through the Caves

Luckily, since the advent of tourism at Laurel Caverns in the 1960s, there has emerged a relatively easy (no equipment needed) short (45 minutes or so) lighted walking loop for visitors. We chose the self-guided version, but you can also do a guided tour of the 1964 section — perfect for those who want to avoid stairs or more strenuous walking — or combine the two paths.

Advanced Spelunking in These PA Caves

Ok, so that’s the easy version — but what about the downright challenging one? You’re in luck: Laurel Caverns offers intense spelunking expeditions deep in the 4 miles of caves. Yes, that’s right: hours-long treks which involve special equipment, difficult scrambling, “getting dirty,” and heart-pounding adventure. (Hope you did your Beachbody workouts to prepare!) We did NOT opt for that tour… but I’m sure it’s exciting for those who are into adrenaline. Let’s go back up now to the easier, lighted option, and talk about its beauty.

Colored Lights in the Caverns

If you’ve read any of my other articles, you may know that I’m an artist who is obsessed with bright, happy colors (like the ABC Islands, wild quilts, or Chihuly glass) — so imagine my ecstasy upon realizing that Laurel Caverns is lit up with rainbow-colored lights! The “decorators” of the cave really knew what they were doing, sprinkling pops of illuminated hues on walls like this:

Taking the illumination a step further, did you catch the photo of the CHANDELIERS lining the ceiling of one of the Laurel Caverns passageways?! Now that’s romantic. It’s like a subterranean prince is trying to woo you, eh? There are also magical colors lighting up the underground waterfall. Happy sigh…

Making the Caves Safer to Tour

In addition to the lights, there are several other elements in Laurel Caverns which make it safer to walk through. I admit that I was fearful before visiting that I would slip on slick rock surfaces. Luckily, the floors of the caves are now covered in traction-inducing sand walkways which deter falling on one’s rump. There are also guardrails in spots which might be dangerous. See some of them here:

Other Attractions in Laurel Caverns

Laurel Caverns has done a great deal to make the caves engaging for children and adults, and offers school groups and families attractions such as panning for gemstones, a “gravity hill” reverse rolling ball optical illusion, and even a miniature golf course underground (!!!) which is delightfully named “Kavernputt.” The directors are to be commended for their work making a section of the caves accessible to people with mobility challenges.

As an English teacher with a particular zest for distinguishing commonly confused words (former vs. latter and apart vs. a part, anyone?) I must take this opportunity to go mentally spelunking into the difference between the words “caves” and “caverns.” Yes — these two terms have distinct definitions, but some interesting overlap.

A Cavern is a Cave, BUT…

It turns out that caverns are caves, but not all caves are caverns — sort of like the relationship squares versus rectangles! The definition of “cave” is a cavity (or big hole) in rock, often in the side of a hill or mountain. In contrast, a cavern is a TYPE of cave which is large, and must be reached by an underground passageway. Frequently, caverns are joined together, making a network of subterranean tubes. Clear on the difference?

Warnings About Visiting the Caverns

While my fears about touring Laurel Caverns weren’t founded (I didn’t get lost, nor slip) there are some considerations to take into account before visiting. First, please make sure to check the official website for hours; the caverns are closed certain days and times of the year, and I wouldn’t want you to go all the way out there, only to find the doors locked.

Second, though the lighted tour is far easier than the multi-hour spelunking option, I did find it a bit more confusing than expected. We experienced several moments of poring over the map, trying to figure out where we were. There was no real danger, as people were walking past and could have helped, but the passageways are sometimes narrow, twisting, or dark, and a certain one of us who shall not be named had some flashes of claustrophobia. You will also want to bring an extra layer, as the caves are always in the 50s in temperature.

Have I influenced you to visit Laurel Caverns? Cool! If you’re in the area, make sure to check out the wonderful other sights in the Laurel Highlands, including Fallingwater (of course!), Ligonier, PA and Main Exhibit, the Fred Rogers Center in Latrobe, the Westmoreland Museum, Blacksmithing classes at Touchstone Center for Crafts (very close to the caverns), Ohiopyle, the gardens and glass paperweights at SAMA, and the hilariously sassy signs at Pletcher’s Farm Market. This region is rich in fun!

Were you as astounded by these views of Laurel Caverns as I was? If you’ve been, what was your experience like? If you haven’t visited yet, does it seem like a place you’d like to go? Do share! 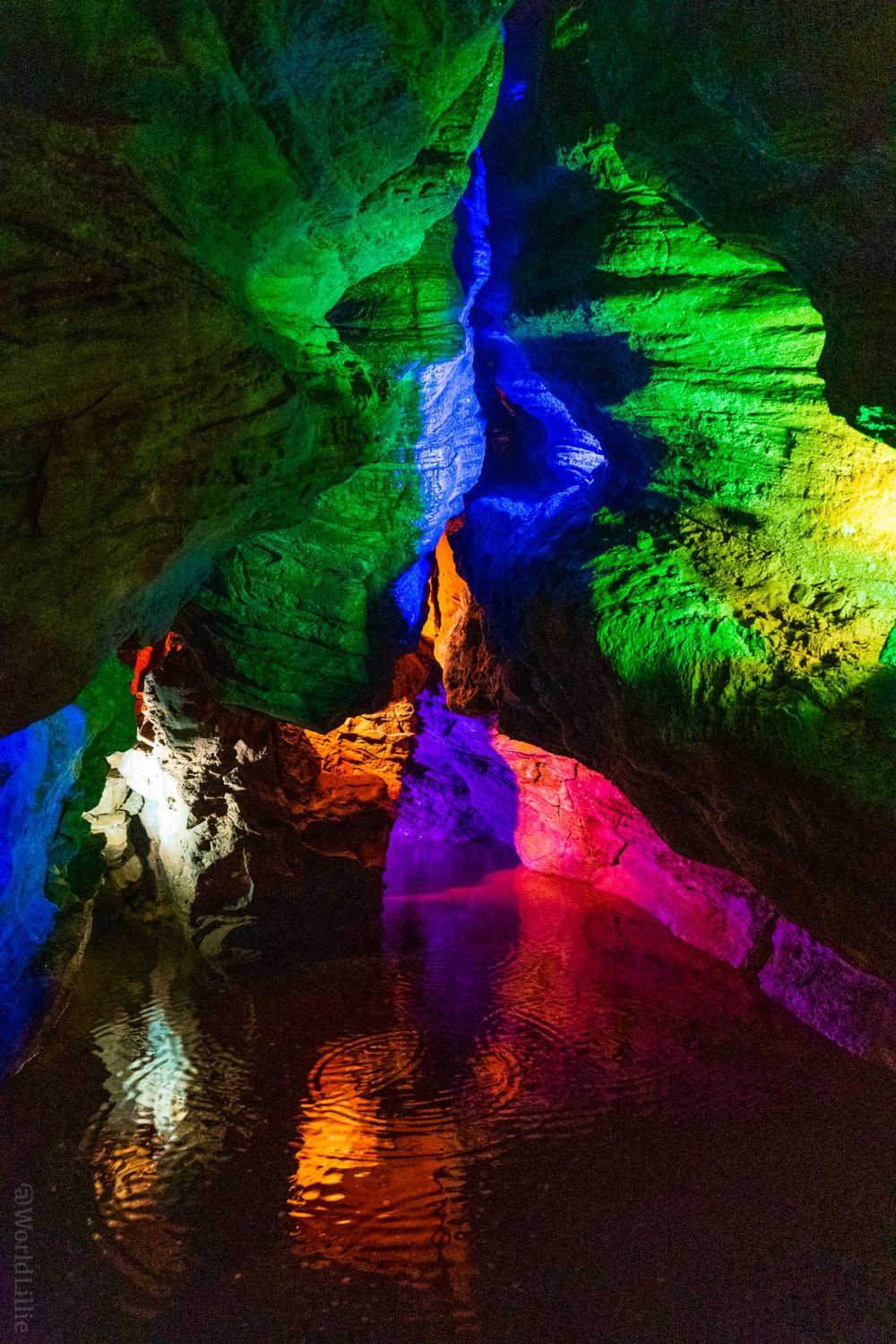 When I was a kid, I LOVED visiting Laurel Caverns! We recently returned with our kids and it did not disappoint. It is such a treasure in Pittsburgh for kids (and adults.) I didn't realize all of the fun facts you included in here. But I definitely think it is a great thing to do for families visiting Pittsburgh or the Laurel Highlands area (so much to do in that area!)

So wonderful that the caves provide such joy for kids and adults alike!

If you're looking for something fun to watch that was filmed at Laurel Caverns, Google Xploration Awesome Planet "Pennsylvania". This episode has a segment on Laurel Caverns. The Google search will reveal a few options via which you can watch it.

Thanks so much for the suggestion! Can’t wait to look it up and watch it.