What is the purpose of art? Let’s tour an astounding place which will utterly expand everything you’ve ever thought about the power and shape of creativity.

What is this miraculous place I’m alluding to? It’s The Ruins Project: a gigantic, outdoor, ever-growing collaborative art exhibit in an old coal mine in the Laurel Highlands of southwestern Pennsylvania. This wonder is an offshoot of Sager Mosaics, which is located in Perryopolis, PA, right off the GAP Bike Trail, and just an hour south of Pittsburgh.

I was lucky to take a tour with Rachel Sager, the artist behind The Ruins Project, and these photos will guide you through what is going on in those leafy woods in Fayette County as of July of 2021. Like Randyland in nearby Pittsburgh, however, The Ruins Project is changing so fast that if you ever get to see it yourself someday, it may look totally different!

The Story of Sager Mosaics

Artist Rachel Sager is the daughter of a coal miner, descending from a long line of coal miners in southwestern Pennsylvania. When Sager learned of an abandoned coal mine — Banning No. 2 — being sold just minutes from where she grew up, she knew she had to buy and transform it. While this edifice was an active mine between 1891 and 1946, the crumbling stone walls have now become The Ruins Project.

Here’s what’s incredible: Instead of just working on decorating the walls of the mine alone, Rachel enlisted the help of artists from around the world. What is therefore emerging now at The Ruins Project is a living, evolving, open-air mosaic museum which both tells the history of coal country in America, AND sings the songs of numerous other voices, near and far.

Here is an example of this artistic collaboration, pictured above. Rachel acquired a pile of old metal gears, and proceeded to post their dimensions on social media via the very active @SagerMosaics Instagram account. Artists across the world then created colorful works of art that would fit exactly within those circles, and mailed them to Perryopolis, PA, for Rachel to attach!

The fire mosaic pictured above is an example of how The Ruins Project recounts specifics from the history of Coal Country in America. The flames depicted by the red tiles demonstrate part of the coal mining process, and even the mosaic bees flying above have symbolism. Every detail of the art pieces at the ruins has meaning.

When I first started the tour of The Ruins Project, I thought the exhibit was just one small enclosure of three walls — but as the hour continued, we kept walking and walking, and found room after room — each of which was filled in every nook and cranny with impactful decorations from different artists. Look closely at the spectacular mosaic, below…

That towering mosaic pictured above actually depicts Rachel Sager’s father: a coal miner descended from generations of Pennsylvania coal miners. I am bowled over by how the artist played with colors and lines using the mosaic tiles to produce the finished piece!

Like the nearby Fallingwater house, the museum that is The Ruins Project dances beautifully with the surrounding nature. In the photo above, admire how the iridescent green mosaic tiles mirror the plants peeking through the crumbling window frame.

Sub-projects have emerged from within The Ruins Project, spurred by ideas from collaborating artists. One such delight is The Bird Project: a series of mosaic birds scattered throughout the abandoned coal mine’s walls! Above, you can see a bright orange feathered friend perched upon a stenciled tree which will soon be painted in.

For all you train lovers out there, the longest mosaic train in the world may be located at The Ruins Project. This giant stretches SIXTY-SEVEN FEET, and was created by artist Stevo Sadvary out of thousands of blue-tinged tiles. It represents the mighty Pittsburgh and Lake Erie Railroad steam locomotive. See the embedded video in this article for what it feels like to walk the length of this masterpiece.

Photography in the Old Coal Mine

The interplay of light and shadow is one of the most entrancing aspects of The Ruins Project, but it does make it somewhat difficult to photograph the space unless you have a profound understanding of camera settings! I was tickled, however, with how the lines and light lined up for the photo of Rachel, below. She looks as luminous as her work!

Now connect that photo of the artist, above, with the picture, below, of the angel art installation in the ruins! Like an angel of illuminating art, Rachel beams her vision to the world…

Rachel has encouraged collaborating artists to add their own passions into the themes of their work. As a result, The Ruins Project now encompasses topics such as climate change, indigenous history, and the role of African-Americans in the U.S. coal industry.

A wonderful detail of Sager Mosaics and The Ruins Project is that it sits right next to the Great Allegheny Passage (GAP) Trail popular with bicyclists and hikers! As a result, my tour was joined by a charming father and daughter duo who were making a quick stop in Perryopolis before continuing their bike ride to Bicycle Heaven in Pittsburgh.

Planning on touring The Ruins Project yourself? The first stop before heading to the ruins (which is a two-minute walk away) is the Sager Mosaics workshop and store. Oh — and they sell artisanal, local ice cream sandwiches! Below, behold the gorgeous rainbow-colored mosaic tiles in the studio.

The Work of Making Mosaics

Though much of the labor of making the mosaics for The Ruins Project happens at the coal mine site itself — or in another city, with the finished project shipped to Perryopolis — you can still see tools of the trade in the Sager Mosaics studio, as with the dramatic hammer scene pictured below.

If you are in Perryopolis to see The Ruins Project, consider also checking out the alluring attractions nearby!

• Touchstone Center for Crafts offers blacksmithing classes and glass-making workshops, among many other art options for all ages and levels. (The Summit Inn is nearby for great mountain views while eating, and Laurel Caverns is a must-see subterranean adventure.)

• The small town of Ligonier, PA has gems like the Main Exhibit crafts gallery, the glass paperweight collection at SAMA and Mister Rogers’ real neighborhood at Latrobe, PA.

• The Westmoreland Museum of Art has a welcoming, inclusive, and fun collection of American art, with and excellent kids’ section.

• Our favorite place we’ve ever stayed in the Laurel Highlands (over many years of trips there) has been the luxury cabins at Oak Lodge.

• Finally, if you want a good chuckle, check out the hilarious signs and delicious produce at Pletcher’s Farm Market.

Thank you, Rachel Sager, for the spectacular — and growing — open-air museum you’ve created at The Ruins Project! I’ll be eagerly following on social media to see how this labor of love evolves. Any artists reading this, I urge you to follow, Rachel too, because YOUR work could end up on those historic walls to inspire countless others! 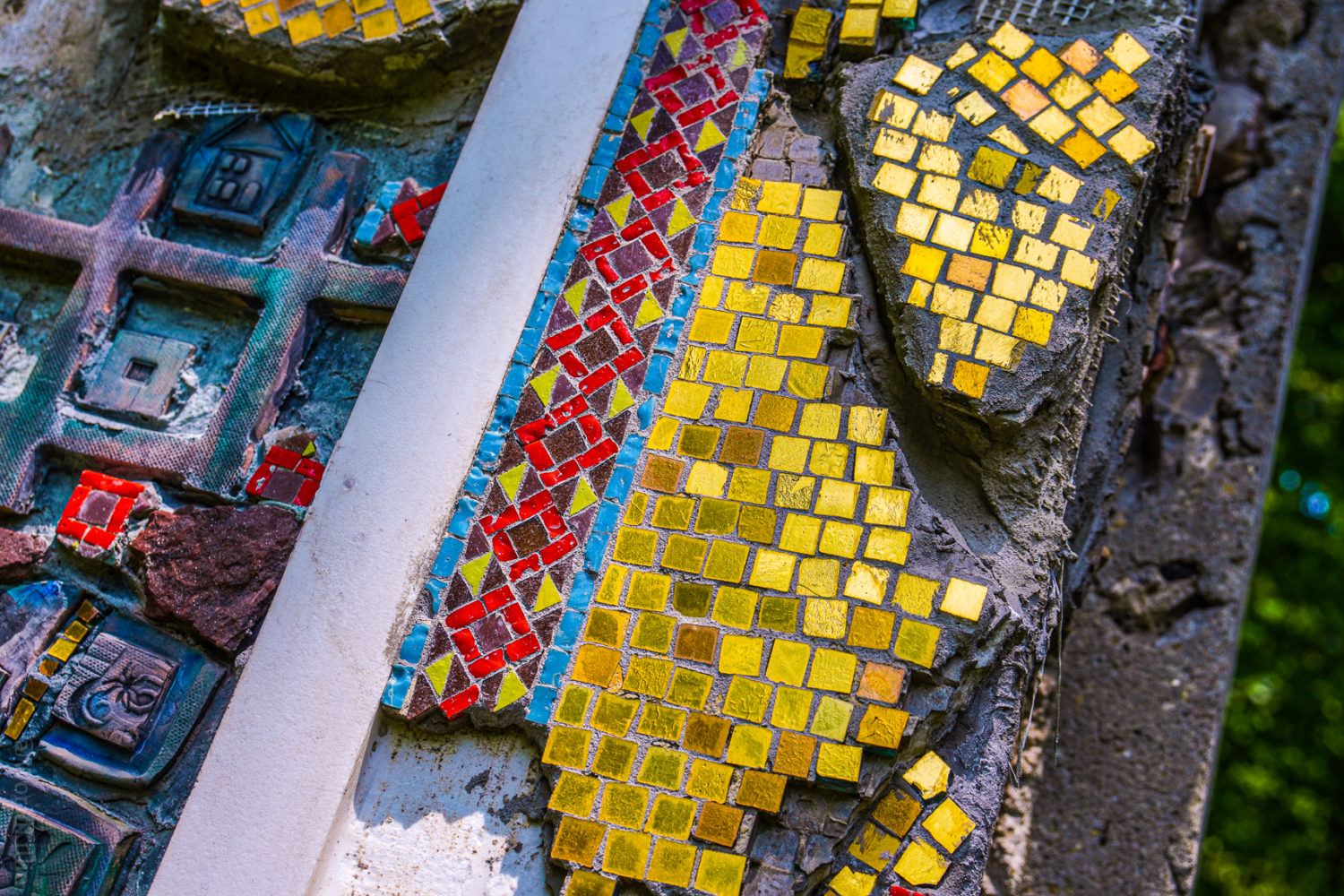