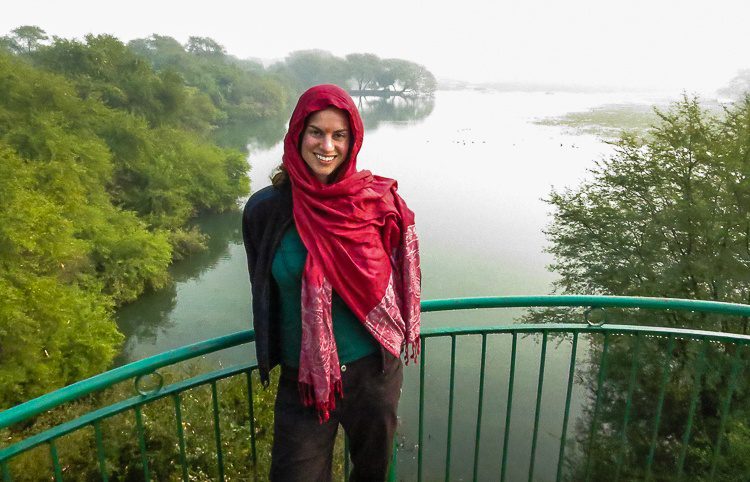 There were several unexpected elements at Keoladeo National Park in India.

Let me be blunt about the first surprise of Keoladeo National Park and Bird Sanctuary in India: On the day we went, the air was so cloudy that we could have seen further by sticking our heads into bowls of oatmeal. Look how ghostly the birds appear in the next photo… 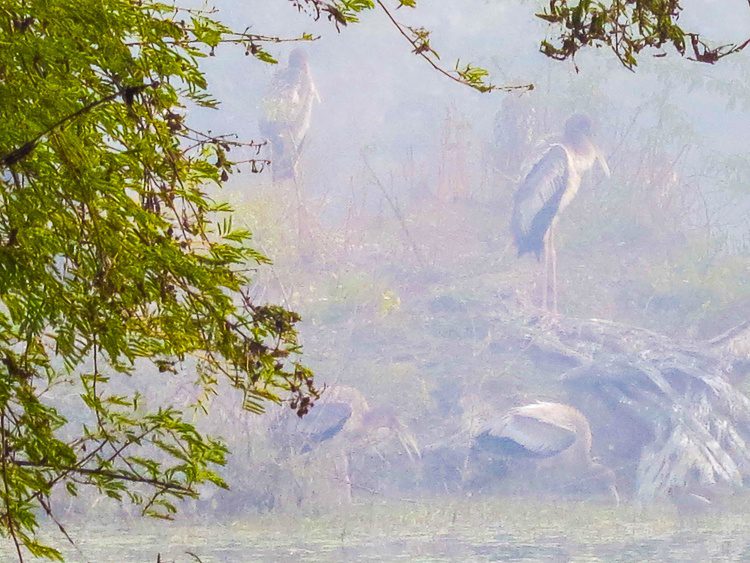 The birds were veiled in a crazy thick mist.

We had to squint and crane our fog-fluffy heads forward, asking: “Is that a bird, or a tree?” and, “Is that a ghost?” as our bicycle rickshaws creaked along the dirt path. 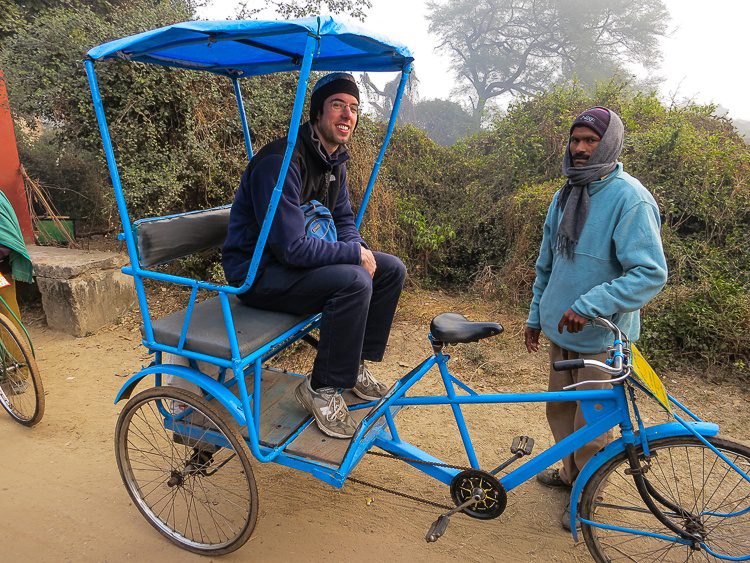 But let us not be ungrateful. When one IS able to see, Keoladeo National Park in Bharatpur, Rajasthan, India is one of the best bird watching sites in Asia. The India teacher tour my husband, brother, and I were on stopped at Keoladeo on our drive from Jaipur to the Taj Mahal, and we were in for more than one surprise. 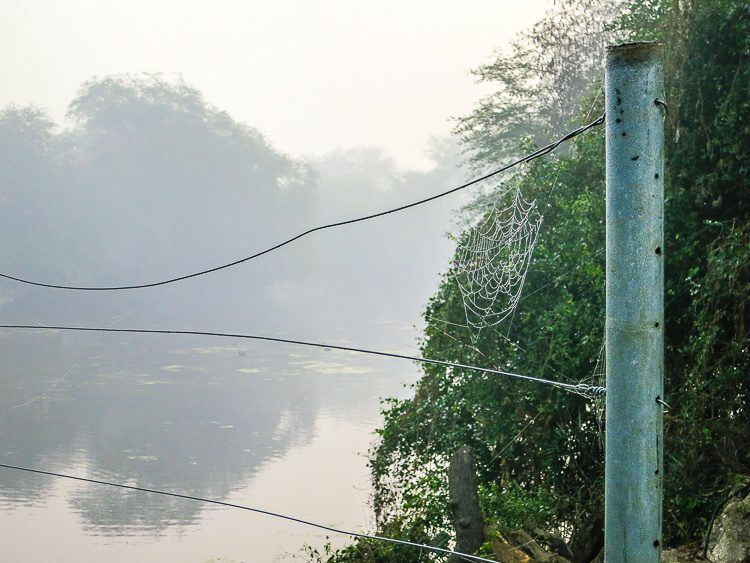 Look at that perfect spider web.

“This sanctuary is over 250 years old,” boomed our guide, “and used to be the private hunting ground of the maharajas of Bharatpur. It is eleven square miles large, and houses over 350 species of bird!” 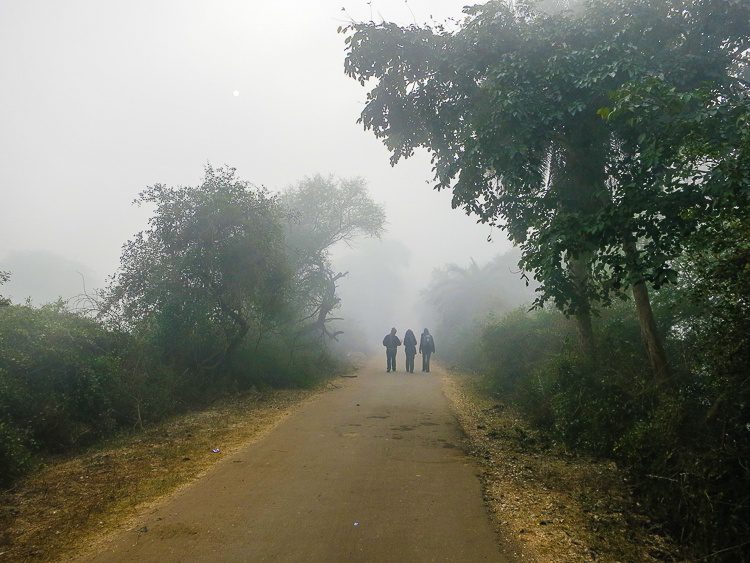 Once we got deep into the park, we had to walk.

The fog was chilly and damp in India’s December, and when the rickshaws dropped us off at the point where only foot traffic was allowed, I pulled my scarf more tightly around my neck. We could hear the birds… it just was a question of seeing them. Then, we came to this spot:

Doesn’t the air remind you of oatmeal?

At that viewpoint, the birds were so big and numerous that they were unmistakable, even through the soupy air. But what was even more unmistakable– whoa!– was the giant cow placidly eating greenery next to our path. Cow in a bird sanctuary? Why not? It’s India! 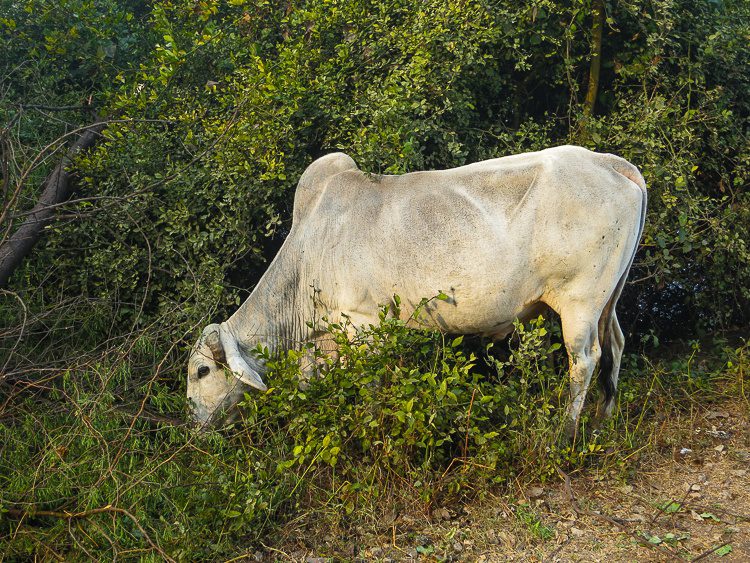 Random cow in the middle of the bird sanctuary.

As our trotting pack plunged deeper into the sanctuary, the fog ever-so-gradually began to lift, and birds emerged from the air’s veil. 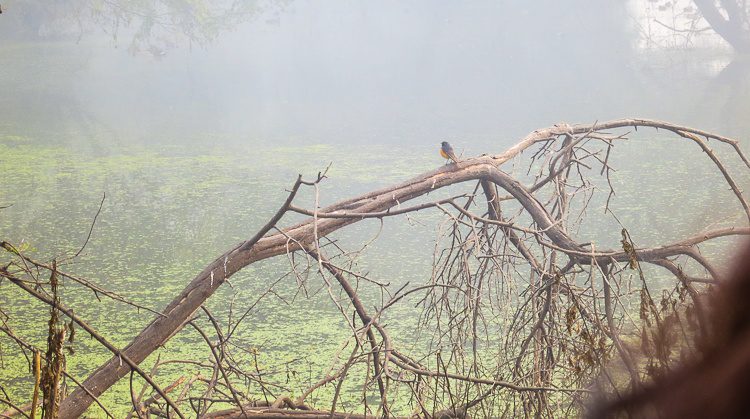 “This area is also known as Keoladeo Ghana National Park,” our guide explained. “In Hindi, ‘Ghana’ means ‘bushy,’ ‘leafy,’ or ‘thick,’ like the foliage here.”

This was fascinating to me, as someone who lived for months in the country of Ghana, West Africa. So entertaining to see the many meanings of the same sound around the globe! 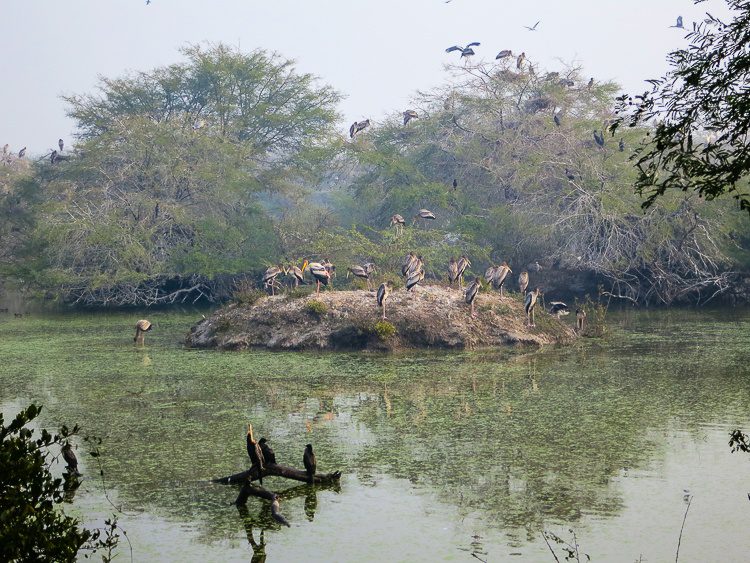 As the fog began to clear, the birds emerged.

Just then we stumbled upon the biggest surprise for me about Keoladeo Bird Sanctuary: There is a working Hindu temple at the center of it! 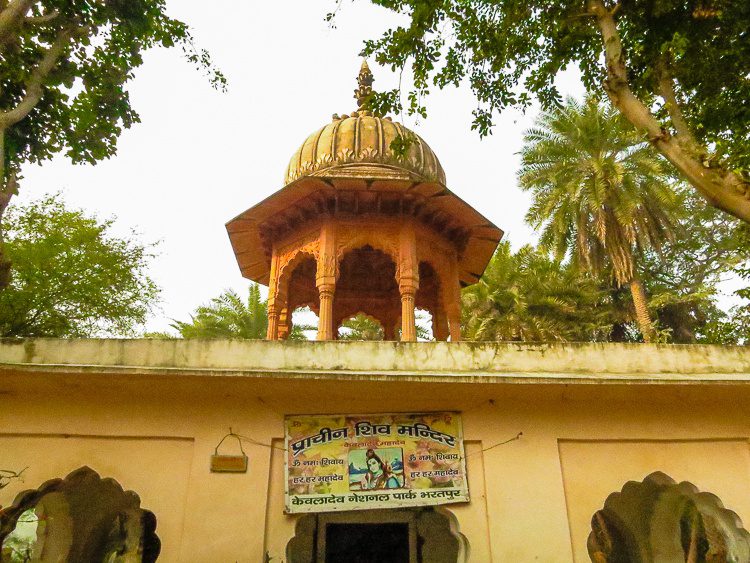 Whoa… A working temple in the middle of the bird sanctuary?!

I should have guessed there would be a temple in the National Park. There’s an amazing temple or mosque inside every other site in India we toured, and even religious figures on alley walls to ward off public urination! Such is the religious love of India. We entered the temple and were blessed with dabs of orange paint on our foreheads. 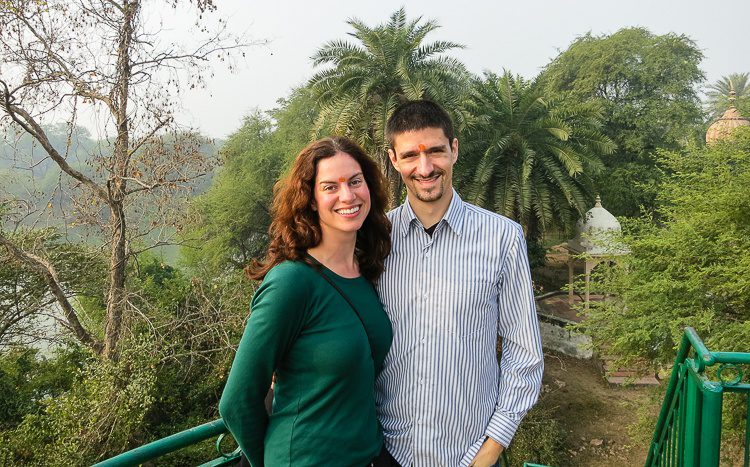 My husband and I were blessed with orange paint on our foreheads.

There was a tall stairway to a raised platform. We climbed it and surveyed the greenery and mist swirling below, bird squawks zinging out, and wings beating the air. 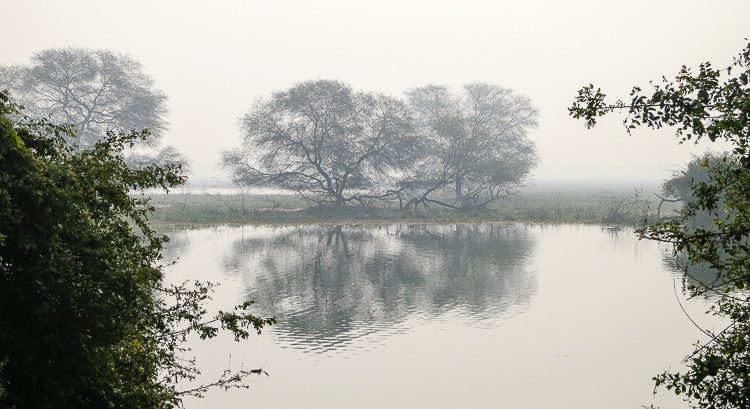 As our group trudged back to the parking lot, new birds emerged, replete with long pointy beaks and meaty bellies. I smiled, thinking about how people immediately think of the Taj Mahal as the main tourist attraction of India, when in reality there are so many lovely animal and nature sights, too. 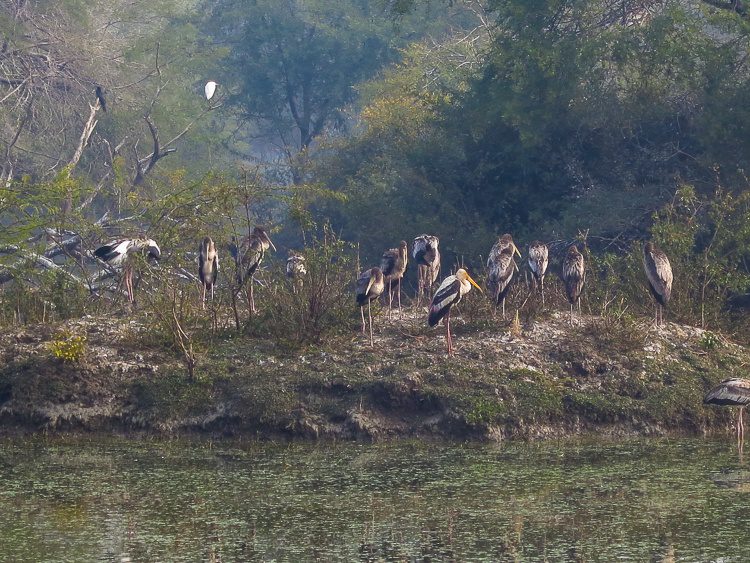 On that note, one more surprise awaited us when we arrived back at the rickshaws. Check out this lovely deer-like fellow demurely wishing us a speedy journey onward! 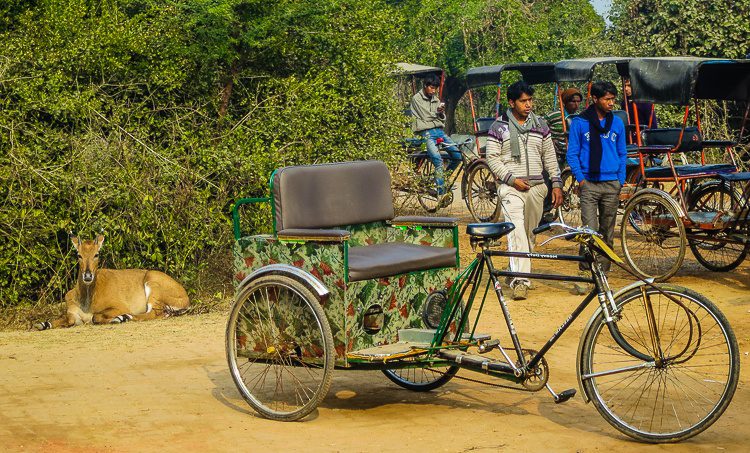 When we got back to the parking lot, a beautiful animal was waiting there.

So what from this journey stands out to you? Can you identify the species of any of the birds, or the final animal? Do share! 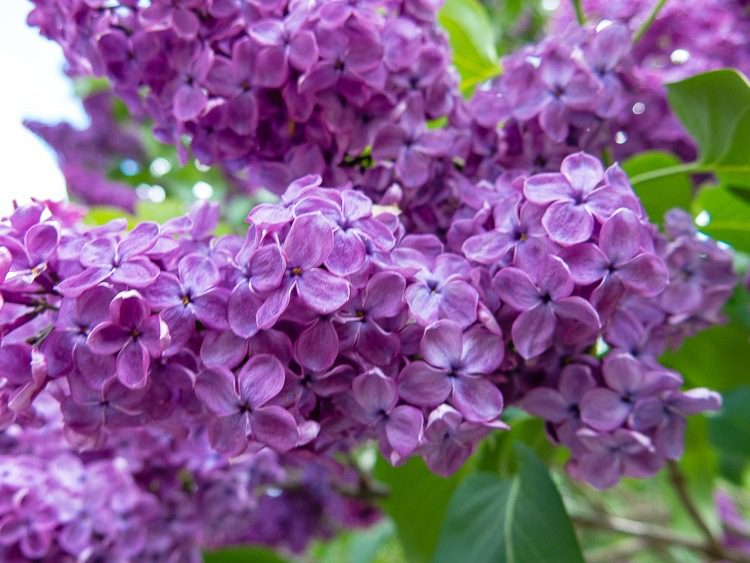 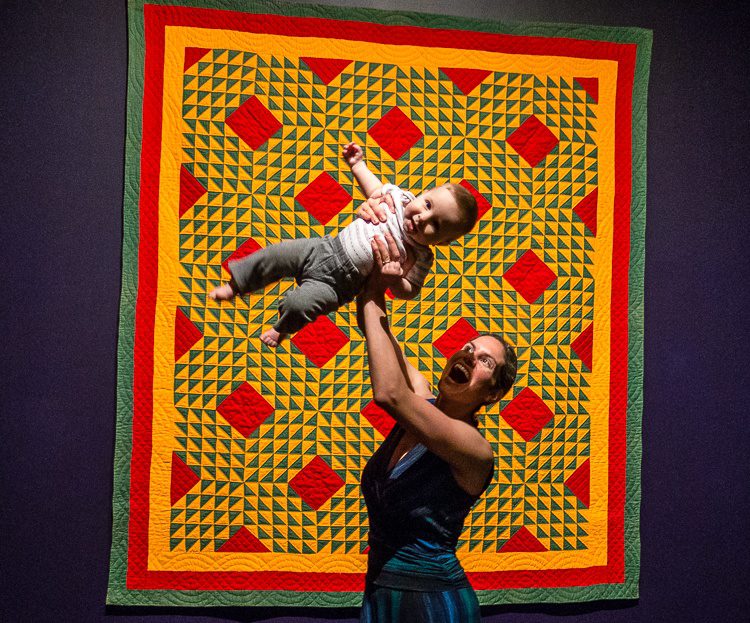 Keoladeo is home to a variety of bird species, it's a perfect getaway for bird lovers. Great content on a bird sanctuary.

Hello there, nice post and love the pictures! The birds you are curious about are painted storks: http://en.wikipedia.org/wiki/Painted_stork The black ones are some cormorants and the white ones would be one of the three egret species.

I really enjoyed this article and its beautiful photos. The fog was like oatmeal. All of those pictures make me want to go there! There seemed to have been a lot of interesting surprises while you walking. I am a real animal lover myself, and this article was very interesting.

Thanks for the help!

Wow, really neat photos of the sanctuary! The mist in the beginning really adds to it, as if you're going to a mystical place, which is fitting! Love the wildlife all over including the cow and the random deer-like animal at the end. Thanks for sharing!

I still remember being shocked at how loud all of the birds were!

Love the bicycle rickshaw (and the birds once the fog lifts -- ready for their close-ups).