What is the Difference between Team Alpaca vs. Llama?

Unsurprisingly, this llama article will sizzle with drama. It contains the battle of alpacas vs. llamas, and goes into depth about the differences between each to allow YOU to choose which you love most.

This article also contains the twisted teeth of llama face close-ups. Finally, it drags you trekking through the soggy woods of Vermont with llama guides by your side, wondering nervously: who might be spit upon and when?

Where are These Llama Photos From?

I started this article seven months ago after an August stay at Smugglers’ Notch family resort in northern Vermont, when the door was flung open to a world of walking in woods with llamas.

“While we’re at Smuggs family resort in Vermont, what activities do you most recommend?” I asked my knowledgeable friend, expecting an answer that was cheese-based and involved a comfortable chair overlooking the Green Mountains.

“You MUST try the llama trek,” he replied definitively. “It will change your life.” (2020 update: These treks may no longer be available, but the information here about llamas vs. alpacas is still relevant and useful!)

This man was correct. Since that three hour trek, I have not been able to get “our” llama — DeeJae — out of my mind. This article took seven months to publish because I agonized over which of the hundreds of photos I took of DeeJae’s wise and wiry white face to select. Every angle of that llama is perfection.

Enough about DeeJae (actually, there can never be enough about DeeJae, but I suspect you are here for other reasons, and those reasons are educational). It’s time to do some learning about how two battling sectors of the camelid family compare.

What are Differences Between Alpaca vs. Llama?

The thing to keep in mind in the debate about whether llamas or alpacas are more awesome is that both are fabulous in their own ways — it just depends what you’re looking for in your fluffy animal desires. (I have some serious alpaca adoration myself, despite my DeeJae llama love.)

As a good little English teacher, I have corroborated all these camelid distinctions and facts from hours and hours of research (perhaps in order to avoid grading papers, but it’s all for a good cause), and sources are cited throughout with hyperlinks.

While llamas have longer faces (almost as elongated as horses, though pointier), alpacas have more squished-in, flatter faces — reminding me of cuddly stuffed animals. I’ve also seen alpaca faces referred to as “round puffballs” which is both accurate and adorable.

The ears of llamas are tall and rounded at the top like bananas. Alpaca hearing orifices are shorter and pointier — a trait which the beloved organization, Heifer International, describes as “elf-like.”

Are you seeing a general pattern shaping up? When you think “Llama,” keep that “L” association going to think: “Long” and “Large.” Why? Our friends the llamas can weigh up to 400 pounds (!) and measure up to 6-feet tall from head to ground, or up to 47 inches from the shoulder.

In stark contrast, the daintier alpaca only reaches around 150 pounds, and is decidedly shorter than five feet (er, 59 inches) from the head. Yes: Llamas are often over DOUBLE the size of alpacas if measured by heft!

Alpaca hair is epic: silky-soft, ample, warm, light, hypoallergenic, and water repellent. Alpaca hair is sixth of the width of human hair, which helps account for its delicious feel — something humans have used for centuries to create garments.

Alpacas are gentle herd creatures, and can be “goofy,” cuddle-loving, fun, and shy. During our visit to a Martha’s Vineyard alpaca farm (yes, such a thing exists), we learned that alpacas “make excellent pets” if you treat them right. You just must buy at least two, since they are social butterflies and get lonely being solo. They can mow your lawn with their mouths and produce wonderful fiber for all knitting needs.

Meanwhile, Llamas are independent and strong, and make ideal guard and pack animals since they can carry up to 20% of their body weight (which, remember, is up to 400 pounds) for miles of trekking. Llamas are also herd beings who crave at least one companion.

Despite the fact that llamas have a reputation of rudeness and spitting, we learned during our three hours trekking that the animals treat respectful humans well, and in fact the whole camelid family spits — including fluffy alpacas. This brings us to the similarities between alpacas and llamas…

Both these camelids are from South America (traveling south after the Ice Age) and have been used by humans for thousands of years. They are some of civilization’s earliest domesticated animals, and both have been eaten for meat — just don’t tell DeeJae.

Both animals are far more likely to spit than to physically attack, and as Lindsay points out, spitting is far better than other forms of beast brutality. She explains: “Thank goodness llamas and alpacas just spit. I have never been hurt by a llama or an alpaca, and I have never had two animals hurt each other. They do not bite, scratch, ram, or butt you, and if they do kick (which is rare) it doesn’t even leave a bruise. If they spit, just go wash. It doesn’t put you in the hospital!” Well said, Lindsay.

In another similarity, both alpacas and llamas sport two toes on their feet, as shown in this glamorous leg shot, below.

Funny, Cute Llamas for the Win

At this point in the llama vs. alpaca debate, I’m torn. I will say something about llamas, though: They’ve got the snaggletoothed hilarity down pat. Here’s a fun game: Gather a friend to play with you. For each of these funny llama photos below, try to mirror the expression of the animal in the picture without your buddy cracking up!

Llama vs. Alpaca: Where do YOU Stand?

Wow. That was a lot of llama love. I hope the llama drama here was exhilarating, and the llama trauma minimal. To summarize: First, llamas are amazing, and so are alpacas, but they sure are different.

Second, if you’re into art, photos of these llamas feature in part of my big “40 Drawing Prompts” article, so stop by it if you want the llama-related creative inspiration.

Third, if you have anything to add to this obsessive study of llama behavior and characteristics, I beg you to chime in via the comments section, as llamas are currently swimming before my eyes, and I need some outside perspective for balance. Finally, we have now come to the tail end of this long and llama-y article, and so… 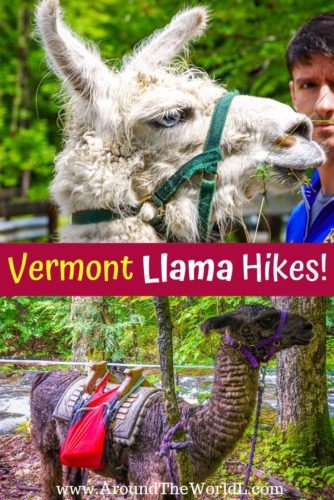 Both are similar in first look but what I saw that Llama is mini version of camel whereas Alpacas is bigger version of sheep. :D I never encounter them in reality but saw them in few youtube videos and they are very funny and cute.

Not illogical at all! Llama love is luscious logic!

Such a fun article, love the closeup shots! We went on an Ilama hike in Vail, Colorado didn't know they are available in Vermont as well.

Well now I desperately want to go on a llama hike - your photos are incredible!!

Thanks, Lisa! Glad to put on the llama hike peer pressure...

I had no idea Llama hiking is a thing let alone in Vermont! Very cool.

The wonders of the world never cease!