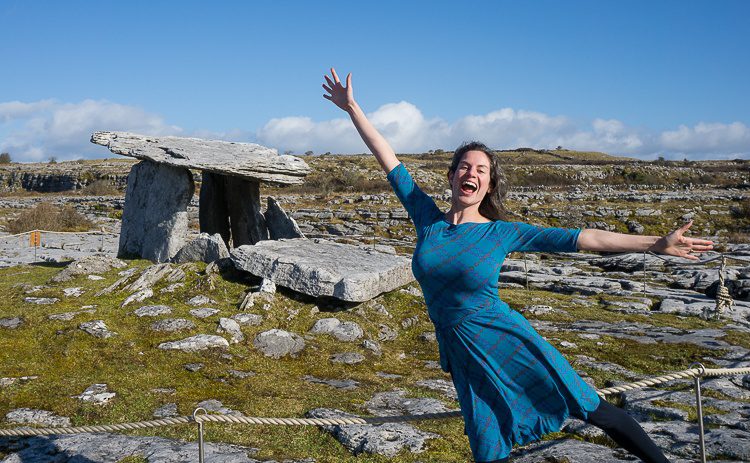 Delighted to have found the most famous place in the Burren!

We Got Lost Trying to Find the Burren

“Excuse me, I’m looking for the famous rock thingy in the Burren?” I asked the Irish gentleman. “You know, the one with the rocks that are like this, and this, with one like this?” I flailed my hands around, making a tipped square shape. “I think it’s called Hole of Sorrows, or something creepy like that?” 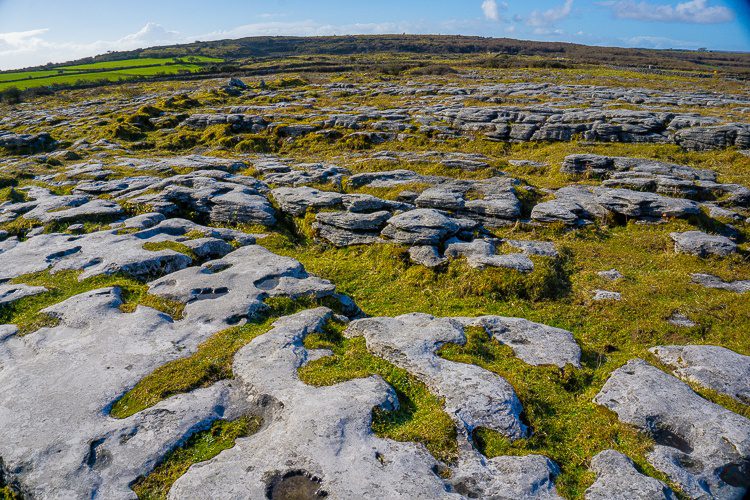 The crazy moonscape around Poulnabrone dolmen in the Burren.

Where is the Burren in Ireland?

The man shook his head with a smile, and replied with that delightful Irish accent, “Google Maps uses that ‘Hole of Sorrows’ term, but it’s mistranslated. What you’re looking for is called the Poulnabrone dolmen. It’s a portal tomb dating back to 5,000 or 6,000 years ago. It’s really quite remarkable!”

Like so many other locals we encountered on our week in Ireland, this stranger was incredibly kind. He drew a map for us, and soon we were on our way. It was a relief to be moving again, as our traveling toddler had just thrown up all over the car during our visit to the Cliffs of Moher, and the interior was starting to smell. 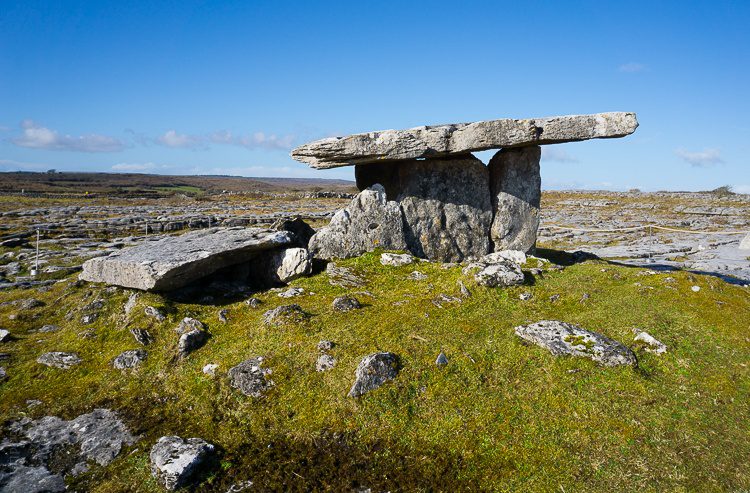 Poulnabrone is a fascinating and famous heap of rocks.

The Connection Between Boston and Ireland

You may ask how I knew about these stones if I’d never been to Ireland before this trip, and why I was so keen to track them down. Well, the answer is a tad goofy. You see, my dear hometown of Boston has a massive Irish population, and names its restaurants and bars accordingly.

As a result, the entire time I was planning our Ireland trip, I kept looking up from the map and exclaiming, “Hey, there’s a bar in Kendall Square named for that town!” or, “Whoa — that place is also a restaurant in downtown Boston!” 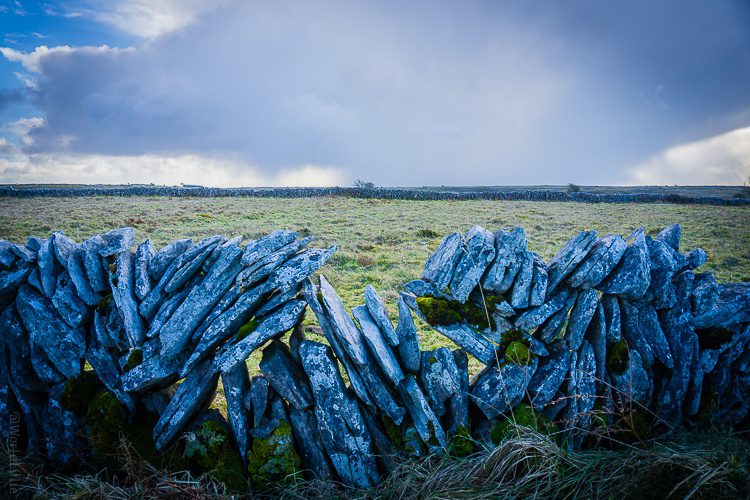 The remarkable Burren landscape and rock walls on the road to the portal.

The Burren is a Bar in Somerville, MA, Too!

So what about the Burren? Well, it was one of my favorite eateries in the town of Somerville, just north of Boston, where I lived for five years! What is the logo for Somerville’s Burren restaurant?

Why, you better believe it is that magical stone portal that I found myself tracking down once we finally set foot in Ireland! I wonder if countries know what good marketing they do for travel, simply by having expats use their place names for stores… 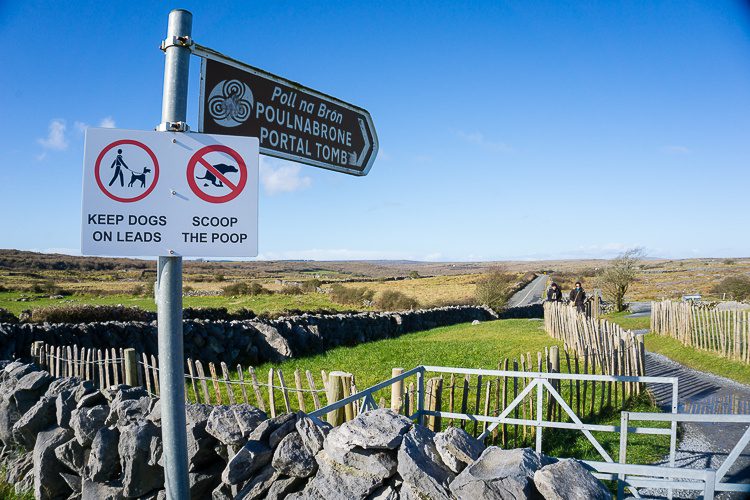 The entrance to Poulnabrone dolmen. No dog waste on the portal!

Facts About the Burren in Ireland

As we drove, I looked up what, exactly, “the Burren” was. From the Somerville restaurant, I thought it just meant that one rock formation, but in fact, the Burren is a 48-square-mile region in County Clare, Ireland with some of the most unique “limestone pavement” ground you have ever seen.

For those (like me) who enjoy rolling words around in your mouth, the term for the cracks that cover the moon-like ground of the Burren is: “Grike.” The resulting rock bulges are called “Clints.” (Excuse me while I put my mouth on my baby‘s belly and say: “Burrrren! Griiiikes! Clinnnts!” until he giggles.)

Something that surprised me was that the Burren is considered a “Karst” or “Glacio-Karst” landscape. This struck me as odd because I know and love karsts — as you may have seen from my posts about karsts in Cuba, Laos, and Vietnam — but these supposed karsts of Ireland look nothing like the tall, flat hills I’ve frolicked past around the world. If there’s a Geologist reading this, please explain why Ireland’s karsts are small bumps instead of mini-mountains. 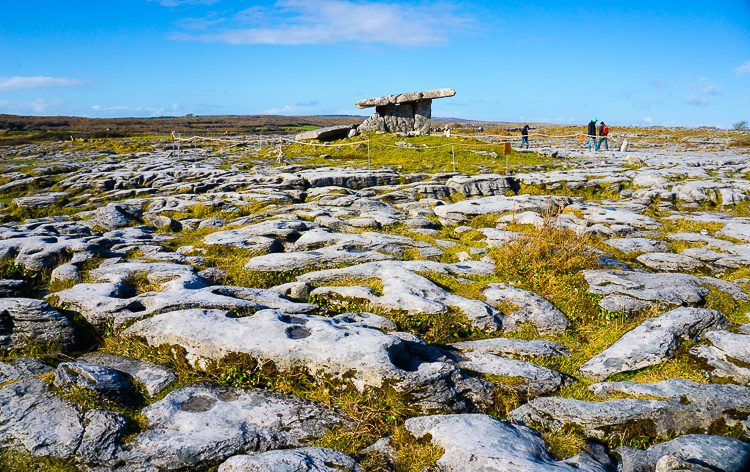 Approaching the portal via the unique limestone pavement of the Burren…

It was more confusing than expected to find Poulnabrone, especially because we kept finding ourselves on roads that GPS named, “Unnamed Road.” We passed the time making jokes with the name, singing, “Pull the Brony!” (a “Brony” being the official term for men who love My Little Ponies).

Suddenly, the moonscape of nothingness revealed a clump of people huddled around a heap of rocks. “COLIN!” I screamed, “That’s the rock thingy! Pull the car over!!!” Colin calmed me down because I was alarming the baby, then pulled into the parking lot. We bundled up and stepped out into the wind. 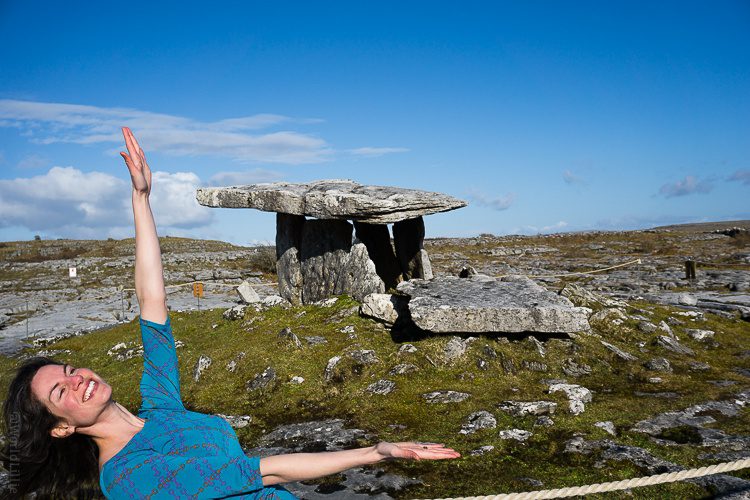 Ta da! One of the most famous dolmens in the world!

How Old is the Burren?

So what exactly is this Poulnabrone dolmen, besides an intriguing decoration on a pub near Boston? In fact, it is a “portal tomb” constructed in the Neolithic period, between 4200 B.C.E. and 2900 B.C.E. When it cracked and fell a few years back, archaeologists were able to dig around under it, and found twenty-two humans elaborately buried beneath!

Yes, you heard that right… the 200,000+ people who visit Poulnabrone each year in Ireland are walking right above the bones of twenty-two people from six thousand years ago. 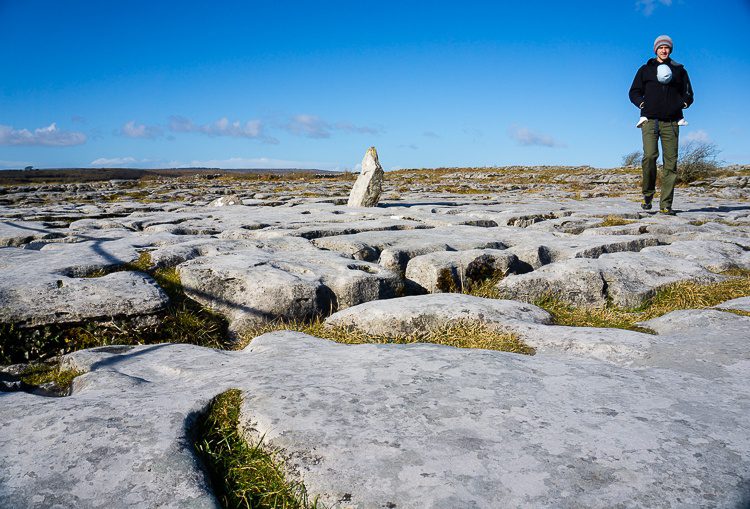 Colin and baby stepping carefully on the knobby Burren rocks.

History of Portal Stones in Ireland

There are around 174 other “portal tombs” in Ireland, and the “portal” part of the name seems to refer to the door-like shape of the structures. For me, however, the term truly stirs the imagination. What it conjures up is the image of a time warp, right?

I half expected baby, Colin, and me to be transported momentarily back to 4200 B.C.E. if we walked through the stones! (See more imaginative drawing inspiration from around the world, featuring this spot.) 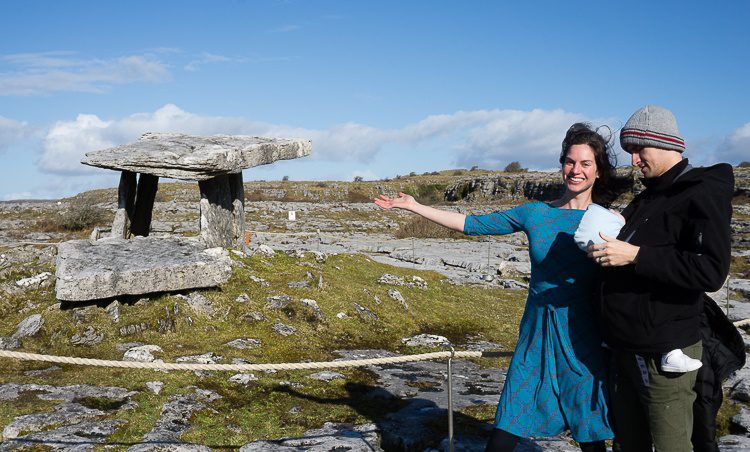 Can you tell how cold and windy it was?

Which Shoes to Wear to The Burren

The winds were picking up and we were getting chilly, so we bustled back to the car, careful not to twist ankles on the knobby Burren “floor.” (Note: Wearing stiletto heels to the Burren would be the worst idea ever.) As we zipped down the rocky road, I felt the contented exhilaration of reuniting with an old friend. I’ll never look at that restaurant in Somerville the same way!

The Burren is quite unique, isn’t it?

Have YOU Been to Ireland’s Burren?

So what about you? Have you toured the Burren? Would you like to? Have you been inspired to visit a place because of a store or restaurant with its name back home? Do share!

Enjoy this article and still planning your trip? Click here for an easy link to Ireland hotel deals, and here for deals on Ireland rental cars, as it will give a small commission to help support this site at no cost to you. Happy travels!

Thank you for your comments and article about the Burren region, I live here I'm an artist and I continually strive to perfect the Burren's natural beauty onto canvas. The Burren is certainly a place of unique and natural beauty,as well as being of historical interest, Polnabrone dates back to 5000 b.c., it's fascination never wanes and the seasons present the elements quite differently. Being on the most Westernly point of Europe and on the edge of the Wild Atlantic we probably have the most dramatic skies.... an artists paradise!!!

I think we circled the area five times before we found it, but it was well worth the effort! I also found my new favorite perfume at the Burren Perfumery. I can't imagine doing the trip with a baby, you have serious travel skills!

Thanks, and glad you found it! I'm curious what the perfume smells like that makes it so delicious.

My dad was born in co. clare. When I took my kids to clare, my son really found the Burren interesting. There are amazin little towns nearby, like Lisdoonvarna. Also the flora and fauna of the burren aids in bealth/beauty.

also there are "healing waters" nearby at a spring. clare has their share of gypsy traditions)

co Clare in itself is interesting, mystic, ethereal. and it is really not one of the "tourist: counties (As much as Kerry or Mayo, e.g. (

Such fascinating details! Thanks for sharing them.

Hi Lillie! This is fantastic - I'm planning a trip to Ireland this June and the Cliffs of Moher and the Burren are our first two stops! So glad I know what to look for now. I can't wait to read the rest of your Ireland posts - I'm sure they will be just as helpful!

Yay! Many more to come: 18 in total planned.

Awesome! I am 100% going to track this place down when I am in Ireland!