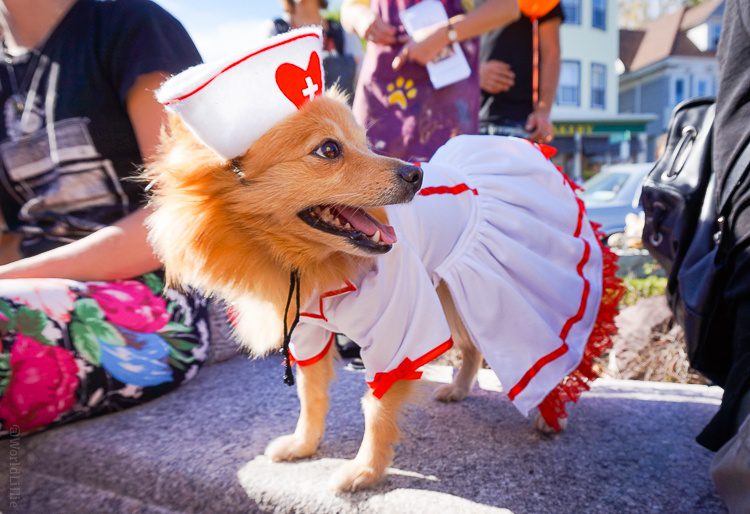 A dog in a nurse costume? YES!

WOW. I just spent the afternoon at the eleventh annual Dog Fashion Show and Costume Parade in Boston, sporting an ear-to-ear grin, and snapping photos of the cutest costumed models imaginable. 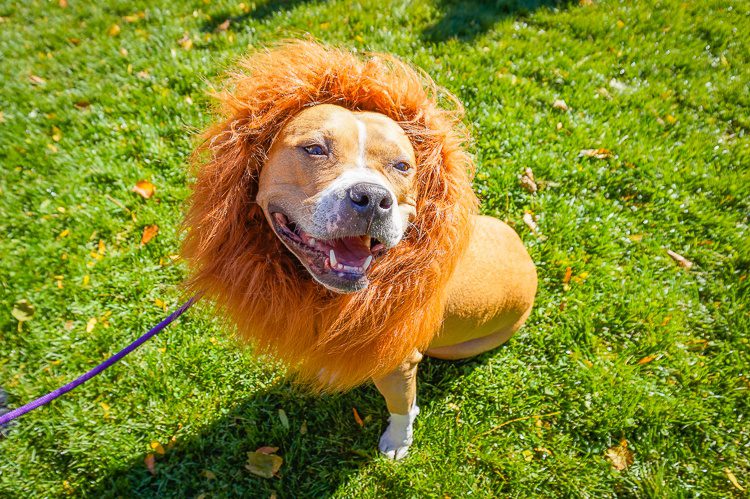 Lion dog. Its owners were dressed as circus trainers!

Can you believe that this event has been going on for ELEVEN years, and I just learned about it? It takes place in Boston’s hip Jamaica Plain neighborhood, and proceeds from the small entry fee support a local shelter.

Just observing like I did is free, and the happiness the event provides goes straight to your soul. 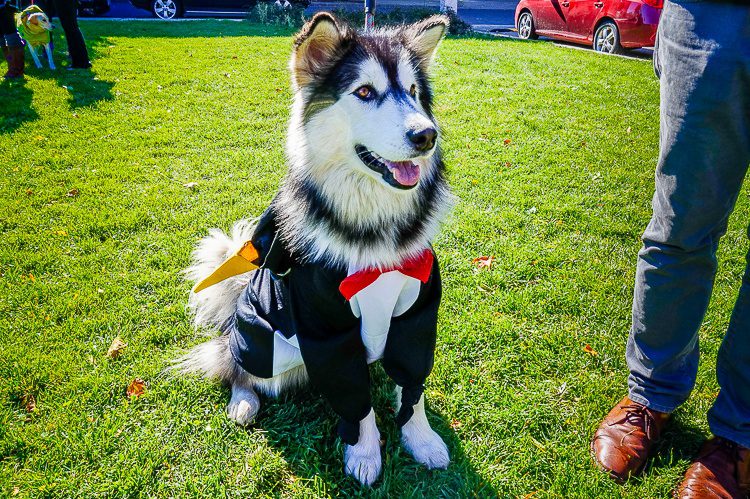 A husky dressed as a penguin in tuxedo. Oh so regal.

Participants convened at noon to do two things: humans registered for the event, and canines sniffed each other’s rumps.

At 1pm sharp, the organizer announced the start of the parade, and the dogs (and their fans!) formed a line that began to strut down the busy main street of Jamaica Plain. 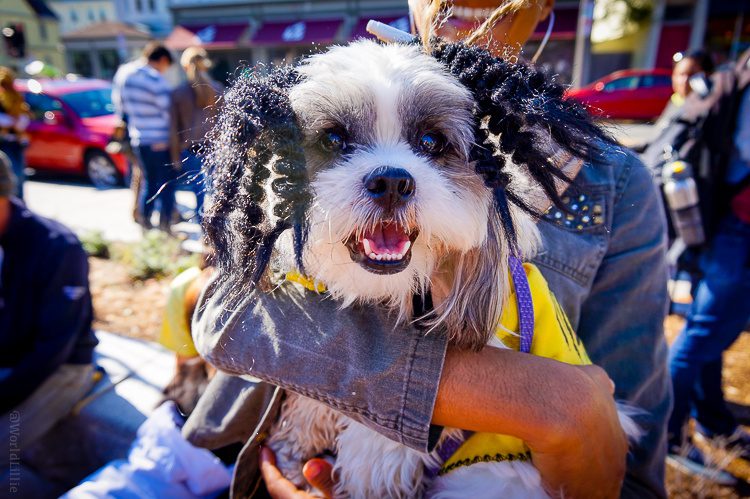 You should have heard the squeals this parade elicited from onlookers! People stopped in their tracks, gasping, “What IS this?!” and tots clapped their hands in glee, their wildest dreams come true. “Mommy, there is a lion doggie!”

One woman just stood on the side with her hand at the level of a dog’s back, so by the time the parade had passed, she had pet thirty pups. Mighty efficient, ma’am. 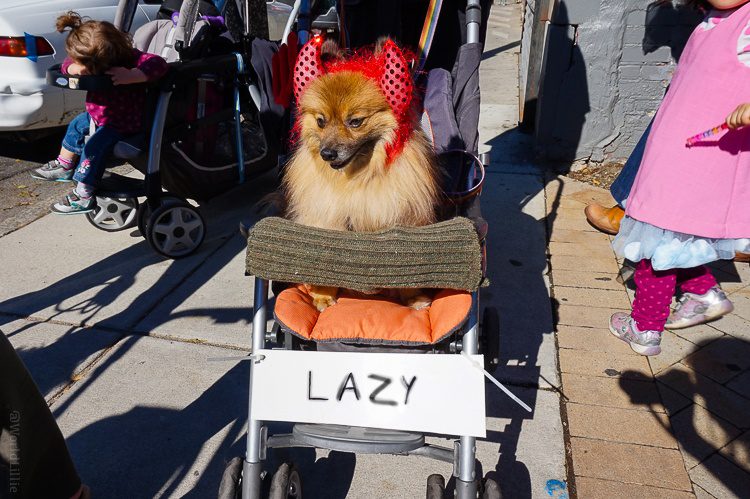 After ten minutes of parading through the glorious autumn sunlight, we reached our destination: a red carpet, ceremoniously rolled out in front of a community tennis court.

The announcer cleared his throat, declaring the start of the big competition: the fashion show! Bulging prize bags winked from the judges’ table, and methinks the dogs became a tad nervous from the pressure. 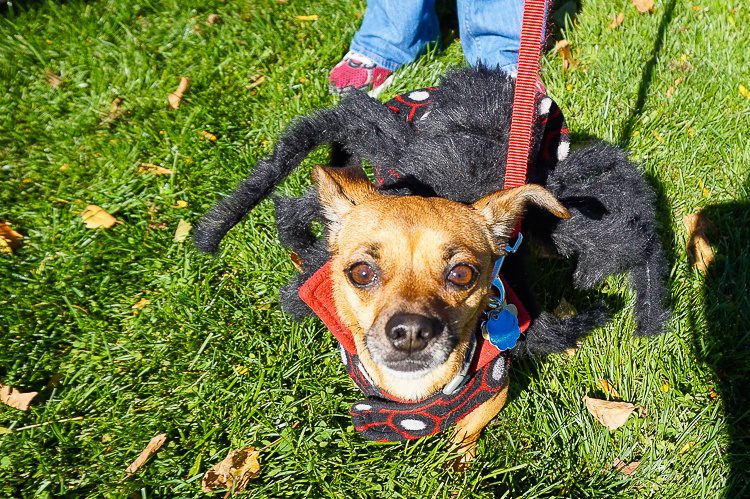 The competition began. Some of the dogs catwalked the red carpet like they were born to do it, head held high, eye contact steely, mouth in just a hint of a knowing grin.

Oohs and ahs exuded from the throngs gathered around the carpet, and the paparazzi, myself included, snapped away, rolling on the ground and waving at the dogs to get the best shots. 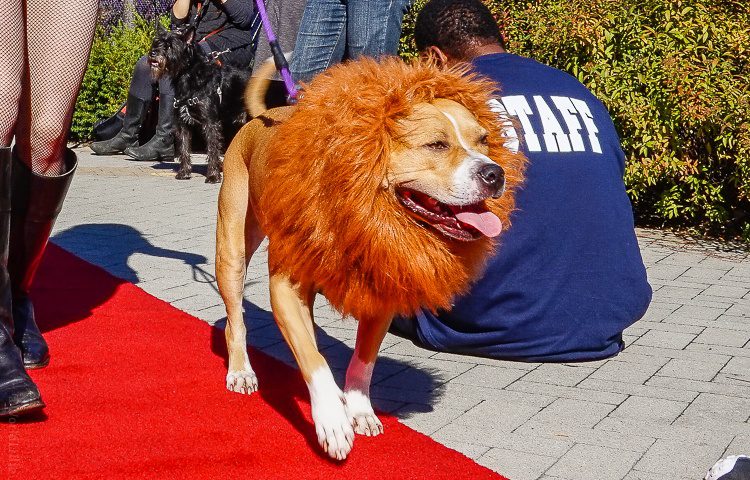 A problem emerged, however. Were some of the dogs attempting to bribe the staff and judges? I caught this questionable close encounter pictured below.

I ask you, how can a person stay impartial when a dog dressed as a caterpillar licks his face? 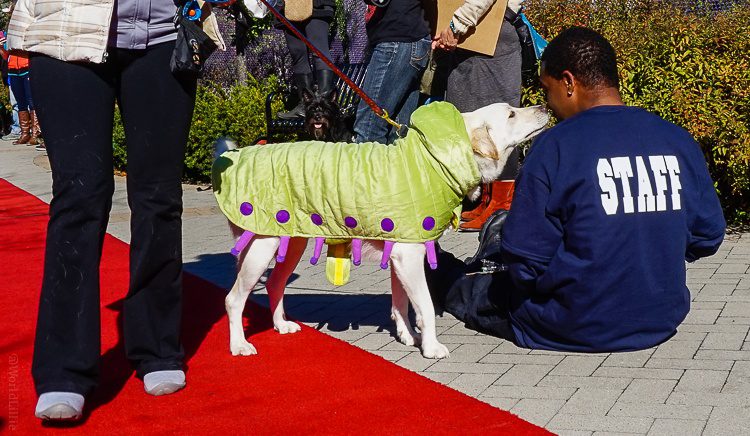 When all the dogs had strut their stuff on the red carpet, the judges announced that they needed some time to deliberate on the winners.

This would be a very tough decision, and they retreated to hash it out. The dogs and their owners panted in anticipation. 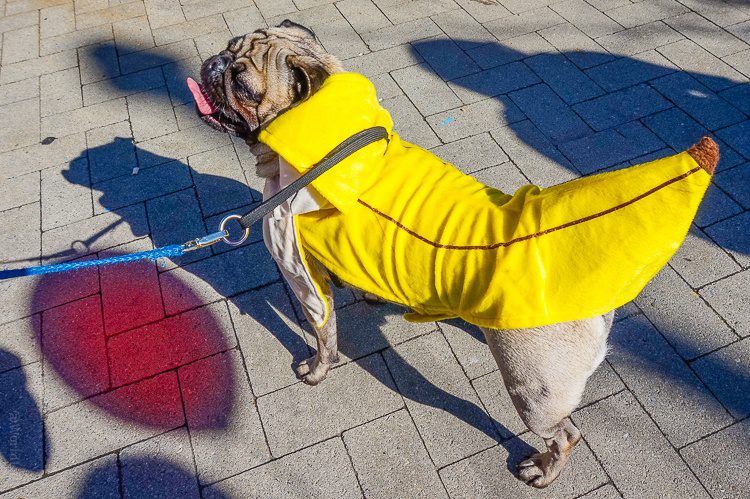 So that you feel the same heart-thumping sensation that we did at this moment, I will not give away the winners just yet.

Instead, I invite you to peruse all the previous photos and the ones to come, seeing if you can guess who garnered the gold, silver, and bronze of canine costume domination. 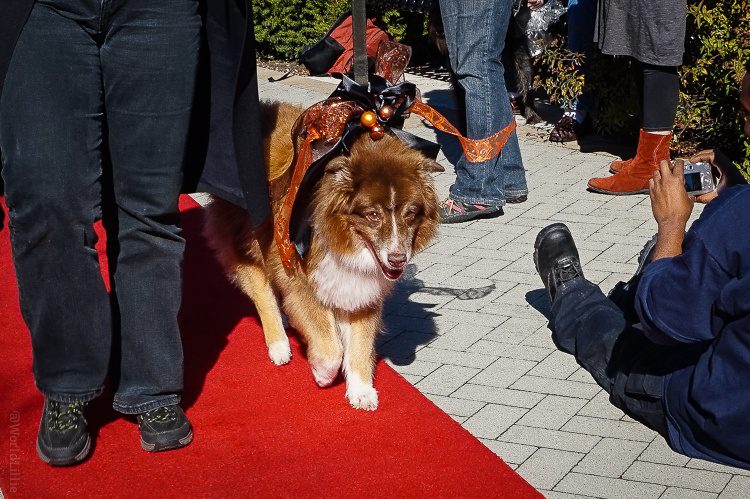 To be honest, I don’t think that you’ll guess the correct winners. I thought I had accurately predicted them all in my head, but it turned out I was wrong. 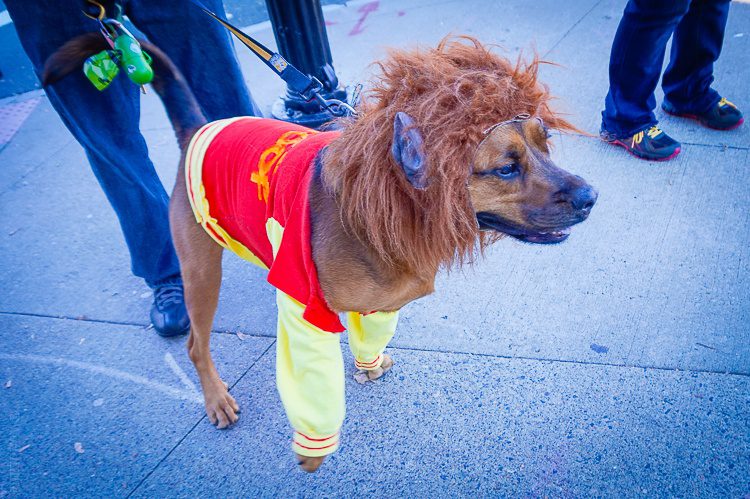 Ok, is the suspense too much? Are you ready for the answers? Here we go. The third prize went to the lion dog, definitely bolstered by its great personality and the creativity of its owners’ circus costumes. 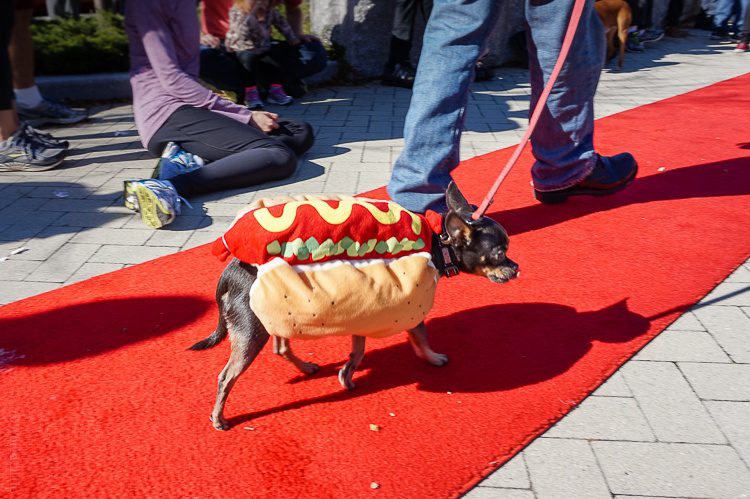 Hot Dog the dog, looking hot on the red carpet.

Second prize went to the adorable little dog dressed as a nurse! Its owner was done up as a doctor, replete with blue hospital scrubs and a surgical mask.

As this pair strode down the catwalk, spectators shouted, “Helloooo, nurse!” The dog beamed proudly and flounced its frilly skirt. 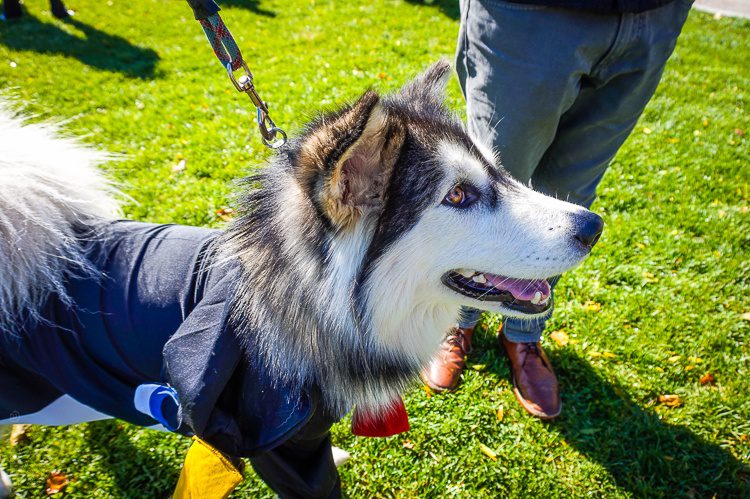 Being beautiful is hard work.

And what about first prize? First prize went to the dog dressed as Teen Wolf! (Scroll up three photos to see it.) Points were given for the creativity and effort put into that costume, right down to the hand-painted words on the painstakingly sewn-to-fit-a-dog varsity jacket. 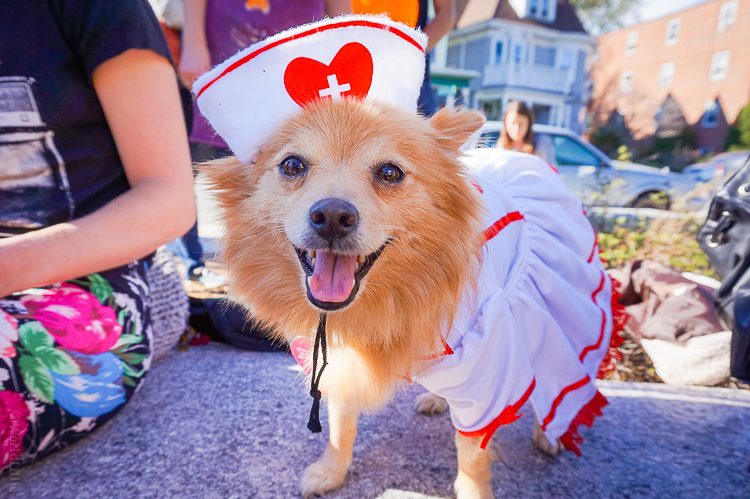 Everyone involved was thrilled by the Dog Parade and Fashion Show.

In case you can’t tell by the fact that I chose its photo as the lead for this article, my personal favorite was the little nurse dog pictured above, but each and every one of the pups was a winner in its own way.

Which were YOUR favorites? 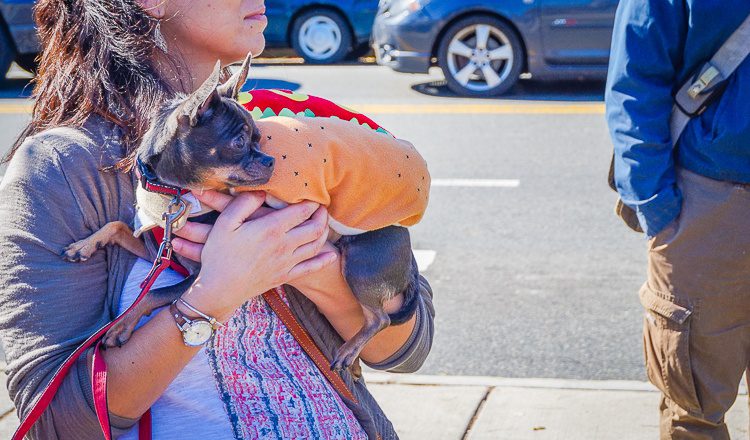 Cuddles with the little hot dog.

So what did I learn from attending a dog fashion show? Two things. First, the silliest-seeming events can bring great joy.

I have had a very weird week (having to get surprise minor shoulder surgery, spending three days in a basement for professional development, and battling a flu-and-cold combo that both my baby and I have), but this parade brought a grin to my face that will last well into next month. 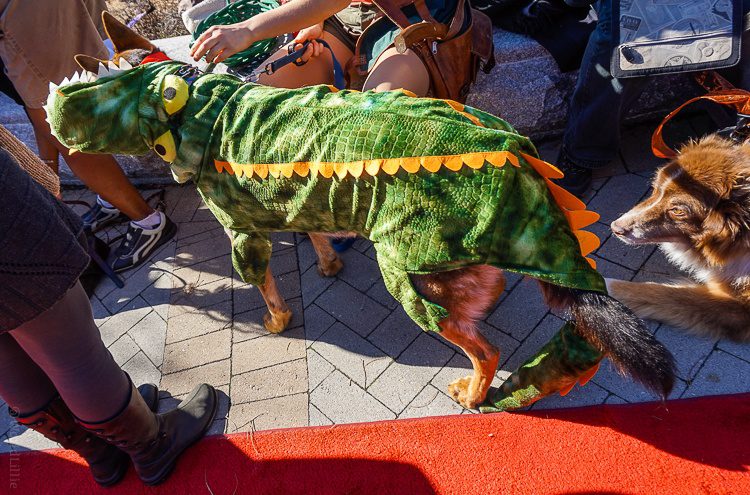 Second, we owe a great debt to those people who keep our communities vibrant by creating and leading such fun events. Thank you, leaders of local joy. We appreciate it! Please keep the awesomeness coming.

If this post got your fashion and creativity juices flowing, check out my round-up of 40 drawing prompts from around the world. 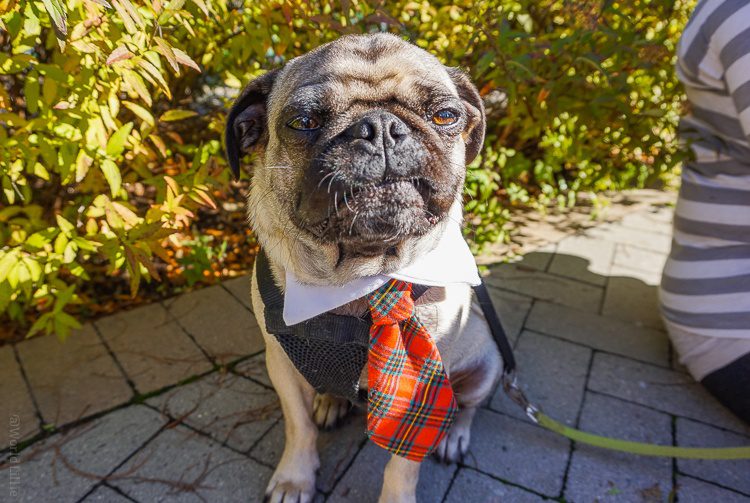 Someone is not amused that he did not win first prize.

I love the Halloween options that exist for our canine friends! The affiliate link below provides a small commission to this site at no extra cost to you:

Do your dog costume shopping by clicking this easy Amazon link!

Those dogs are mighty patient!

These pooches all look cute and seemed like they were enjoying themselves. My pup when he was alive (we had to put him to sleep a few months ago) was very fussy about this kind of thing and HATED having anything foreign put on him. He would fight and bite and try to wriggle his way out. I once tried to get him a raincoat for the rain because he was like the Wicked Witch of the West when he had to take him out the rain, there is the most hilarious picture of him looking absolutely miserable in the doggie raincoat we put him in. So we never tried Halloween costumes but I always envied dog owners who managed to corral their dogs into one.

Awww, he must have looked so cute in the raincoat!

That lion one is a great idea for next year ... thanks for putting it in my head.

Thanks for making the world a cuter place! :)

Lovely pets..! they look so cute and chubby. that pink one in the beginning is so cute. loved your post sweetheart :)

Looks like a fun event. That lion costume is adorable.