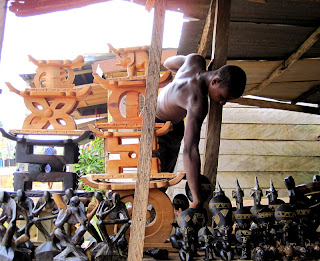 “Please do not be offended,” said the soldier at the Volta River roadblock, “but are you a spy?”

“No I am not.” replied Dan respectfully.

“Are you sure?” asked the soldier, eying Dan’s fancy camera.

And thus began our epic journey to the distant hill town of Aburi to fulfill the mission of Backpacking Granny: 1) Take seed money from the U.S. to Ghana to buy hand-crafts, 2) which Dan will bring back to Connecticut, 3) which Bright Star Vision will sell at its fifth annual Ghana Fundraiser on February 20th in Hartford, 4) which will raise money, 5) which Backpacking Granny will send back to Ghana and Youth Creating Change! 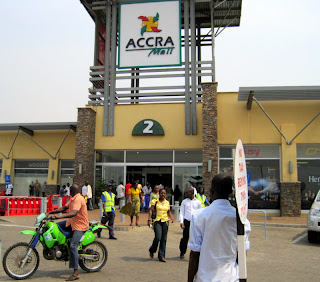 The tro tro (shared minivan taxi bus) chugged us to chic Accra Mall, where we all hit the ATM, since our home of Sogakpe, two hours away, has none. I activated my new Visa card, as Mastercard is pretty durn worthless in Ghana.

Through the wonders of cellphones, we reunited with YCC’s director, John, who was fresh from twenty-four hours of buying supplies in Accra for the upcoming youth holiday party. John was sporting a fancy new haircut because his Auntie, with whom he had stayed the previous evening, had chided him for needing a trim. 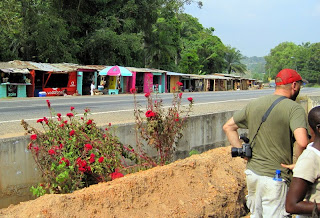 To the hill town! We hopped in a taxi for this leg of the trip, as carrying two hundred wooden figurines on a tro tro would stink. John had summoned for us the same driver who had picked me up at the airport, and this proved a fine choice. He would play a key role in the day.

The road became dusty and gridlocked, and then smooth and green. We climbed the first hill I’d seen since Germany, and the air cooled. “This is so awesome to see different parts of Ghana!” I sang to John, bouncing on the taxi seat. John smiled. 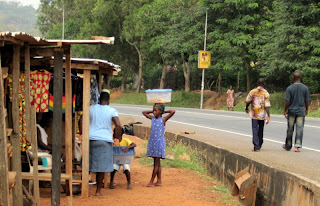 We arrived in Aburi! The wood carving mecca is a strip of about forty stores, twenty on each side of a rushing mountain road overlooking a steep drop. Each store is packed with glistening carvings and vibrant cloths. Outside on benches, store owners slice through wood with chisels, then coat the naked carvings with toothbrushes slick with paint.

The results were gorgeous! On John’s suggestion, we did a first pass of every store without buying in order to suss out the goods, and then set down to business… Five hours of business to be exact. 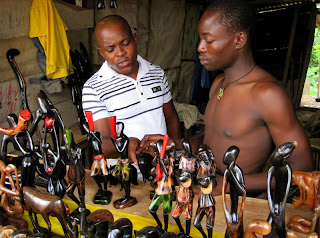 A system emerged. Dan would go into a store and lay aside the items he thought would sell best back at home. Then John and our dear taxi driver would enter, and John would do such an amazing job of bargaining down the price through his humor, charm, and logic that I had to shield my mouth to avoid cheering “Go John, go!”

See the photo to the lower right for a view of some heated price negotiations. (John is the one wearing his shirt.)

Next, I would write down each of the items purchased (ex: “Hand holding egg”), its symbolic significance (ex: “Life is precious”), the price we bought it for, and the name of the merchant. John helped immeasurably with the spelling of the Ghanaian names. 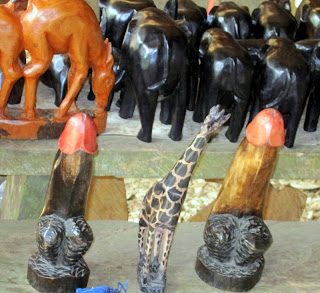 Then we’d summon Dan from the next store over, where he was selecting the subsequent batch of pieces, and he would snap a photo of the merchant with his high-tech camera. Dan would then tell me the photo number and I would write it on the paper.

The taxi driver collected and bagged the items, and I dropped the info-packed paper into the plastic sack. Phew! Repeat times forty. 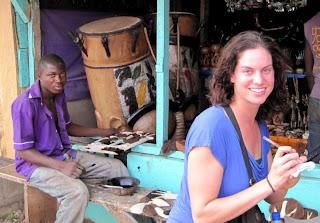 “What about this?” I would periodically ask Dan, pointing to a hand-carved phallus amid the giraffes. “That would totally sell.”

“That joke got old two hours ago,” said Dan.

“It never gets old,” I giggled.

“They use those for condom education,” said John. 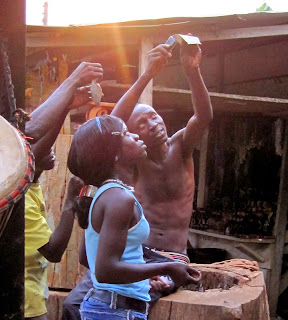 uddenly a woman from three stores back came sprinting up to us. “You gave me a counterfeit bill!” she said, thrusting the ten Cedi note back at Dan.

The woman held the note to the light. “See? No watermark!” She then crumpled it in her hand next to another bill and opened her palms. “Now you can really see. They fold differently. This one is counterfeit.”

“No problem then,” said Dan amiably, holding up three other bills and taking back the suspicious one. “Pick a new one that looks pure and real.” 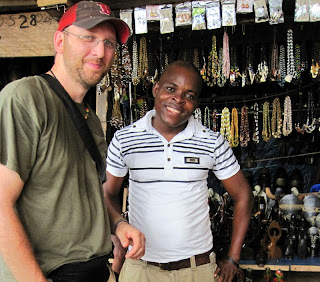 The woman did, then joined a pack of other merchants who set voraciously into studying each bill they had against the lowering pink sun.

“This rubber is not big enough,” said John.

John held up the plastic bag with the set of eight elephants. “We need a bigger rubber because this won’t fit.” 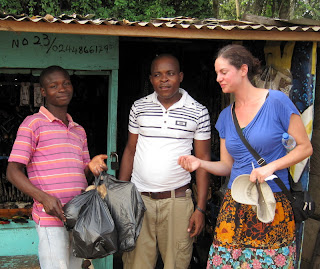 I nodded, called over the shopkeeper, and added another entry to my mental list of funny differences between Ghanaian and American English.

“You’ve got to cut me off from buying more elephants!” wailed Dan. I think seventy percent of our stock now is elephants. But they just look so cute I can’t help myself!”

“Have I bought any drums yet?” Dan asked dazedly, “I can’t even remember that far back.” 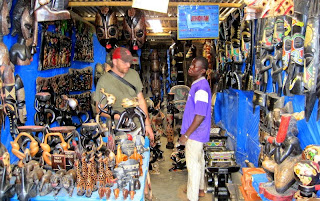 We had arrived at Aburi around noon-thirty (if that isn’t a real term, it should be), and it was sometime around five thirty in the evening when Backpacking Granny’s money ran out.

We were caked with salty sweat, dizzy with hunger (we’d forgotten to eat lunch in the excitement), laden with around two hundred hand carvings, and giddy with happiness.

“This was EPIC!” I squealed. 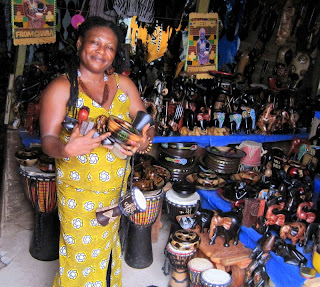 This week, we will pad the goods in Dan’s giant red suitcase with soft and fuzzy clothes, send it all back on the plane with him mid-month, and pray that the good citizens of America will want to purchase some wood to do some good.

Interested in checking out the Ghana fundraiser on the evening of February 20th in Hartford, Connecticut?

Check out the details at http://brightstarvision.org/ or email Backpacking Granny (aka “Mighty Marla”) at: [email protected] .

There will be lively drummers, engaging speeches, vibrant photos, and lots and lots of beautiful Aburi handicrafts!

You sure bought a lot of interesting things! The amount of thing you bought was so surprising.

Wow! I can't believe that you bought 200 items for a fundraiser! Also I thought the part about buying the elephants was really funny! Overall I really thought it was nice for you to do something so nice for a place you probrably just visited for the first time.

To be clear, it wasn't my money -- it was the nonprofit organization that had raised it.

I hope they got them all through customs without incident.

It was a close call, but after some sweet-talking ( https://aroundtheworldl.mystagingwebsite.com/2010/01/16/ghana-will-miss-efo-kwabla/ ) we got it through! The question is: if we had invested in the wooden phalli, would THEY have been allowed on the plane??

Tony said... I swear the whole "phallus amid the giraffes" is set up by the stall owners. It just makes sense to them to lay items out in a symmetric way. Maybe it's an in joke where they see how many blog mentions they can get lol.

backpackingranny said... Did you really buy 200 items for the fundraiser? YAY! This post reminded me of the day I bought the fertility statues from the roly poly woman with the huge voice! She also patted my down to confirm that my pudginess was real, saying "I like you - you are PLENTY!" hahaha I loved Aburi, but we only had about 30 minutes to spend there. I am so glad you perfected the bargaining system. Great work.

Luddy Sr. said... For a few hours I felt like Michael Jackson shopping in Las Vegas during that weird documentary, just picking things I liked and buying them on the spot.

I forgot how hungry we were....that half baked bread on the ride home really hit the spot!

Thanks for all your help!!!!