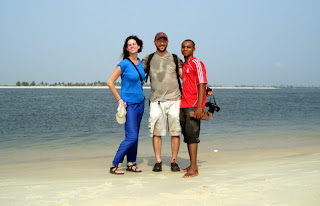 Under the curve of Mother Africa’s head, before her long neck, the blue Volta river spills forth from Ghana and meets the Atlantic Ocean.

Today we had a free time before the Youth Creating Change holiday party tomorrow, and so American Dan, German Alexander, and I went with Ghanaian YCC Staff Member Collins to the meeting of the waters.

Seth pointed to Dan as we were leaving. “You,” he said, “you bring me some salty ocean water. Use your old water bottle.” He pointed to me. “You, you bring me some Volta water. Then we mix them on me when you return and it will be like I went.” Seth grinned his glowing grin and we all smiled, too.

We piled into the taxi Collins found (“Don’t come with me to get it,” he had said, “’cause they will give you the yavoo price!”), and bumpity-bumped down the dirt road to the southwest. 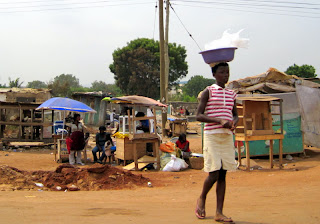 On the ride, Collins taught me words and phrases in Ewe, the local language, and I took notes and practiced my broken Ewe on Dan who was trying to sleep.

Collins was an awesome teacher, carefully spelling out each of the “dz” and “ow” combinations for me to pencil down, and explaining that in Ewe there is a letter that looks like a backwards “C” and sounds like “or”! It’s a rollicking fun language, and much longer blog articles on it are coming soon.

We arrived at a cluster of wooden huts along the water and gaped again at all the women carrying giant bowls and packages perfectly on their heads– no hands! This sight is every two minutes here in the Volta region of Ghana, but it never fails to awe me! 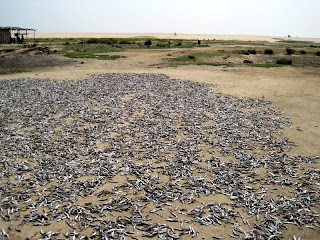 We headed towards the distant waves through a crowd of ornery goats. They glared and meandered out of our way, bleating. Who’s ever heard of sand goats?

Suddenly: a sharp smell! A glittering expanse of silver! We nearly tripped over a pile of eight hundred tiny fish drying in the sun (pictured, left).

Collins shooed away a defiant goat who was attempting to munch at the fish. A local woman nodded her thanks to Collins from the distance.

In a few minutes the bleached white expanse of the beach stretched out to either side of us and the Atlantic ocean winked a “hallo!” to us, all the way from Boston. 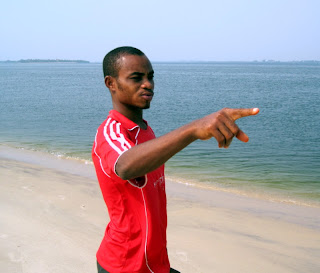 “We walk one hour to reach the mouth of the river,” Collins boomed in his deep bass voice. “I hope you brought your sun cream this time so you don’t get red like my shirt,” he added.

I had, I had! I learned my lesson from our crispy (though fascinating) three hour walk a few days ago.

We whipped off our shoes and fluffed through the expanses of foam that chased our knees and bottoms with wet kisses.

“I wish we could swim,” I sighed, and Alexander yelled in response, “It’s far too dangerous!” A giant wave slammed into the shore to emphasize his point. Indeed, not a soul was in the water, as far as the eye could see. 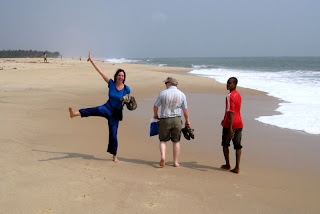 Everything that man says is wise and sounds like a dramatic movie preview! The small Ghanaian village that is getting him as a teacher next Monday is very lucky.

“One thing that is not so nice about this beach,” confided Collins, “Is the people defecating.”

“WHAT?!” I gasped. Collins nodded his head to the beach ahead of us. Sure enough, crouched about thirty feet from the water was a line of six people dropping their deuces into the soft sand! 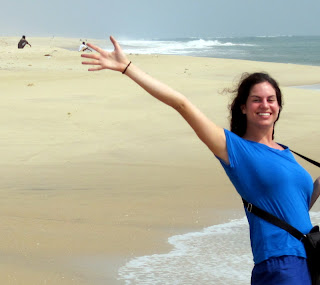 As we walked by each one (there were about twenty-five more in the course of our two hours walking), we’d sort of awkwardly turn to the ocean and try not to breathe through our noses.

Sometimes the people would hide their faces with their shirts, and sometimes they would brazenly look straight at us, their sweaty, naked bottoms glinting in the sun. Some doodled with their fingers in the sand in lieu of reading a good magazine.

Look carefully at the photo of me to the right. If you trace the line of my raised hand, you will see one of these beach bathroom-goers merrily squatting and farting away!

There was a ton of trash (pictured, lower left). Some of it was whipped into curved lines of rainbow pseudo-art on the white sand by the ocean, and some of it was just fluttering around the squatting locals.

Collins explained that YCC and other organizations do have anti-litter campaigns and education programs starting up, but it takes a whole lot of re-education to change the pervading habit of tossing wrappers atop Mother Earth.

We passed four giant dead turtles (pictured, right)! They were purple with decay and seething with insects.

“I was hoping they’d be alive,” sighed Dan. They most certainly were not. 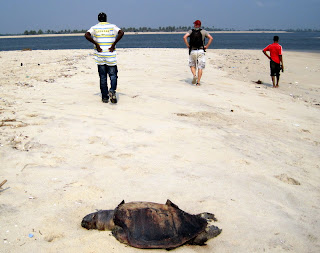 After an hour, we saw a boat bouncing in the ocean waves and headed straight for the beach in front of us.

“Either that boat is going to slam into the sand,” I said, “or we’re at the mouth of the Volta!

Sure enough, we soon came to the point where the salt water meets its fresh brother!

Alexander plopped contentedly in the sand while the rest of us frolicked and took photos in the dazzling sunlight. Our German friend popped open a box of moist-looking dried plums from Germany and offered us some, but we were happy to just chomp on sea salt air.

We caroused a bit more, and then headed the hour back to the taxi. Our driver cut short his chat with a local fisherman and trotted back alongside us. 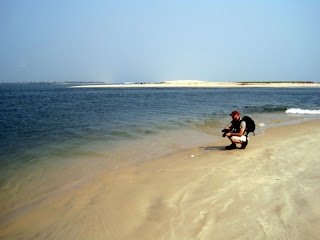 An hour later, we were back in the taxi, bumping further down the coast in search of one “CocoLoko Beach”. Forty minutes passed, and we found ourselves in a brightly-colored fishing village lit by the lowering sun.

“I begin to think we have passed the beach,” Collins boomed, worried.

It turns out we had. Whoops! The taxi made a dust-filled U-turn and within a half hour we were sipping Cokes overlooking a pristine, trash-free resort beach.

It was at this point that one member of our party became seriously ill.

Let us not go into gory details, but suffice it to say that having horrible food poisoning on a one hour drive in a rattling taxi on a rutted highway in Eastern Ghana is seriously not fun. 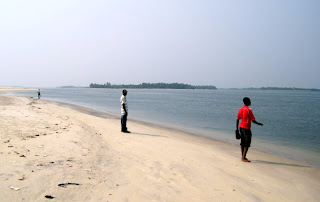 Serious kudos to the taxi driver for skillful screeches onto the road’s shoulder to let the vomiting explode! But by some miracle of Ghanaian good energy, we all made it back to the comfort of our Sogakope guesthouse.

I didn’t understand at first what Backpacking Granny meant when she demanded, “Make sure to travel around Ghana before you really set down to teaching!”

But she’s so right. How can you waltz into a country and smush learning into its youth without first exploring some of what that country is all about?

Theresa Perry would argue that this argument holds true as well for American teachers prancing in to school the sons and daughters of ethnicities, races, and classes far different from their own. 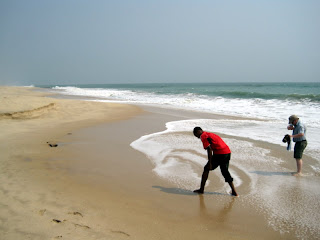 The lovely thing is that the YCC and Ghana school schedule work out perfectly for this.

School doesn’t get into full swing after vacation until a week from now, and scattered throughout the next few days are fun YCC events like the Grand Quiz and Holiday Party to help us all get to know each other.

In the meantime, let there be passion in our exploration, foam on our feet, and food poisoning out of our bellies!

Oh, and this country is awesome. Hurrah for being here!