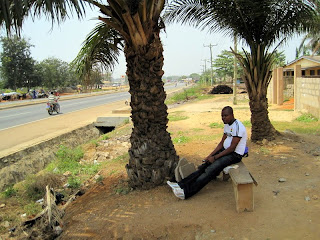 The events of this article occurred two weeks ago, but will surely be echoed in my experience today!

Perhaps you recall that it turned out I was in Thailand illegally.

It was unintentional, it really was. Chalk it up to the guard on the Thai-Lao border going on a joyriding break and allowing me in without a stamp.

But regardless, being an illegal visitor caused some real headaches at the Bangkok airport when it was time to depart. “You’re lucky you’re a White American female!” my male, African-American former co-worker sagely observed via Facebook. “If it had been me, I would still be in a cell somewhere in Suvarnabhumi Airport!” 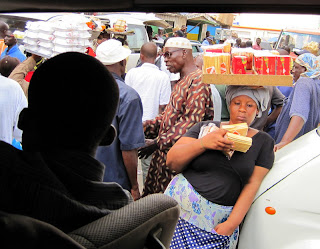 Having experienced that Bangkok airport police scare was why, then, when I realized that my Ghana visa will expire thirty days before my flight from Accra to Madrid, I rapidly enlisted John’s help in heading to the Accra Immigration office.

John and I stood by the side of the road waiting for a tro tro to take us to Accra, but every single vehicle that passed was either full or about to fall apart.

One hour into waiting, a nearby store owner took pity on us and lugged out a wooden bench for us to sit on (pictured, upper left).

One hour and fifty minutes after we left the guesthouse, a vehicle finally pulled over and let us on. Hurrah! Off to Accra’s Immigration office!

It took roughly the same time to drive from Sogakope to Accra as it took to wait for the tro tro: two hours. 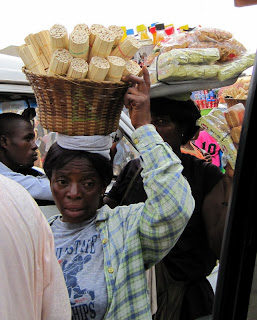 Once inside the Immigration lair, there were forms and fees to fill and documents to produce. Thankfully, John had done this before and already had the list of all ten zillion documents needed.

I paid forty Cedis, surrendered my passport and application to the surly agent, and received the receipt to pick up my visa in two weeks.

As John and I walked through the streets of Accra to the major tro tro station outside of massive Makola Market, I realized: I have been to a LOT of cities in my life, but I have never, ever been in a city like Accra.

How to explain Accra… how to explain Accra… Totally confusing, with traffic choking the streets, trash cluttering the ground, and scattered landmarks like the Kwame Nkrumah memorial amid concrete roundabouts and— sheesh, I have no idea what I’m talking about yet because I’ve hardly spent any time in the city! 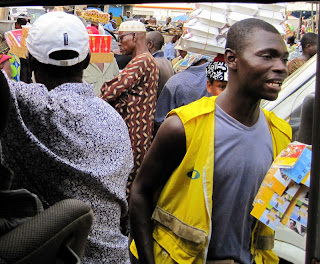 …Which is a major reason I’m exploring it for the first real time now, as you read this!

Of one thing, however, I am sure: the city of Accra is teeming with bustle, namely traders selling their wares –usually from the tops of their heads! Thankfully, this teeming small-scale commerce doesn’t feel so threatening or in-your-face as it does some other developing cities.

I remember how unsettling the young hawkers in Cambodia were, screaming, “YOU BUY FROM ME! YOU BUY FROM ME!” But Ghana’s salesfolk are decidedly more pleasant and low-stress.

This was emphasized by what happened as John and I readied for our return journey from Accra to Sogakope. 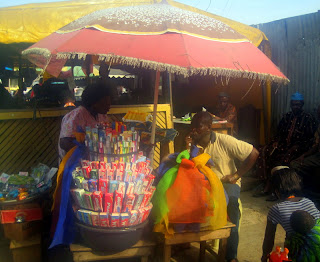 The YCC director and I reached the hectic station next to Makola Market, located a relatively new-model tro tro that was heading East, and hopped aboard.

Because only four of the fifteen seats were occupied, we had to wait for full capacity to be reached, and this wait was sure to take at least fifteen minutes.

All of the windows were open, and all around, traders pressed in tight, singing the song of their wares. My stomach growled and my eyes grew lusty.

I was absolutely STUNNED with the things you could purchase of various head-tops in the span of two minutes, all while sitting lazily in your tro tro seat.

Here is a list of SOME of the items being hawked at our nose-tips through the tro tro windows: 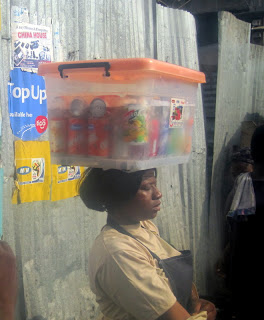 So we had a nice little picnic right there in the tro tro!

All of the photos here were taken out the window of the tro tro in the fifteen minutes we spent waiting at the station before zipping back to Sogakope.

I assume that this street hawking is illegal in America, which is why I’ve never seen anything like it in my life. I’m sure it was outlawed for some reason such as “disturbing the peace” or “causing mass food poisoning.” 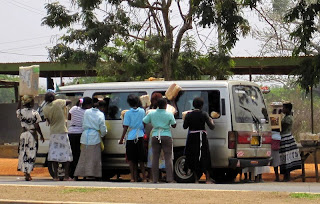 But one has to ask: isn’t it rather nice to be able to purchase a Thighmaster and Business textbook simply by leaning out the window of one’s vehicle?

Hopefully after this weekend in Accra, I’ll be able to pass along some new insight about Ghana’s capital city!

And don’t be surprised if I return with a few tubes of toothpaste, two chickens, and a giant laminated map of Ghana– just for the sheer joy of buying such items off a fellow human’s head while stopped at a tollbooth line on the Accra-Aflao Highway! 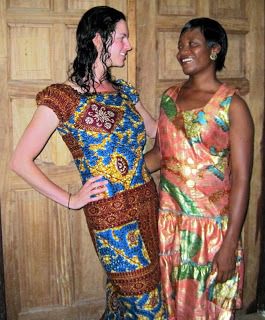 My First Ever Interview, and a Party!
← Read Last Post 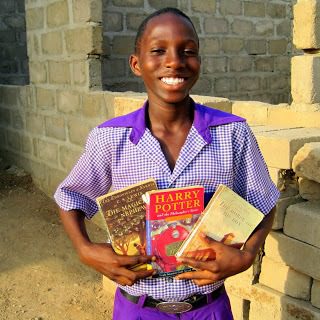 Lorraine said... Staying legal in a foreign country is a good thing!! I love to travel because I love experiencing those bustling foreign cities that are hard to describe! What fun going shopping from your tro tro...you'd think the vendors would have horrendous headaches from carrying their headtop wares. Enjoyed reading about your Accra adventure!

nodebtworldtravel.com said... Thighmaster??? In the original box or without the packaging?

Anonymous said... I'm sure, the Ghanaian sellers don't realize, that they inhaled so much poison while doing their extremely lowly paid job. But, it's very convenient to have a drive-through at a place, where the car must stop anyway.