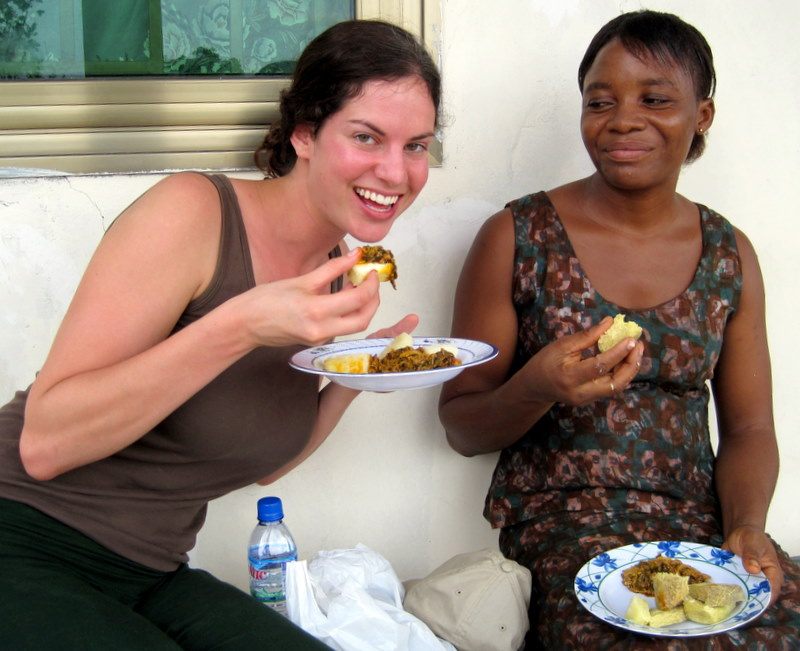 I have another piece entitled: “The 7 Most Delicious Foods of Around the World 2009.”

Now another year of voracious eating has passed, bringing my munching mouth through Ghana, Spain, Portugal, New York, Philadelphia, and Boston. Burp! And a world culinary update is due.

Without further ado, let’s dive into the 10 Most Yummy Foods of Around the World Travel, 2010!

Click the highlighted titles to open a new window with drool-inducing photos and descriptions of each item.

10. The pineapple in New York magically cut with my cousin’s high-tech pineapple cutting tool. Who knew technology had evolved to the heights of being able to core, de-skin, and dice a whole pineapple in 1.5 minutes flat?! 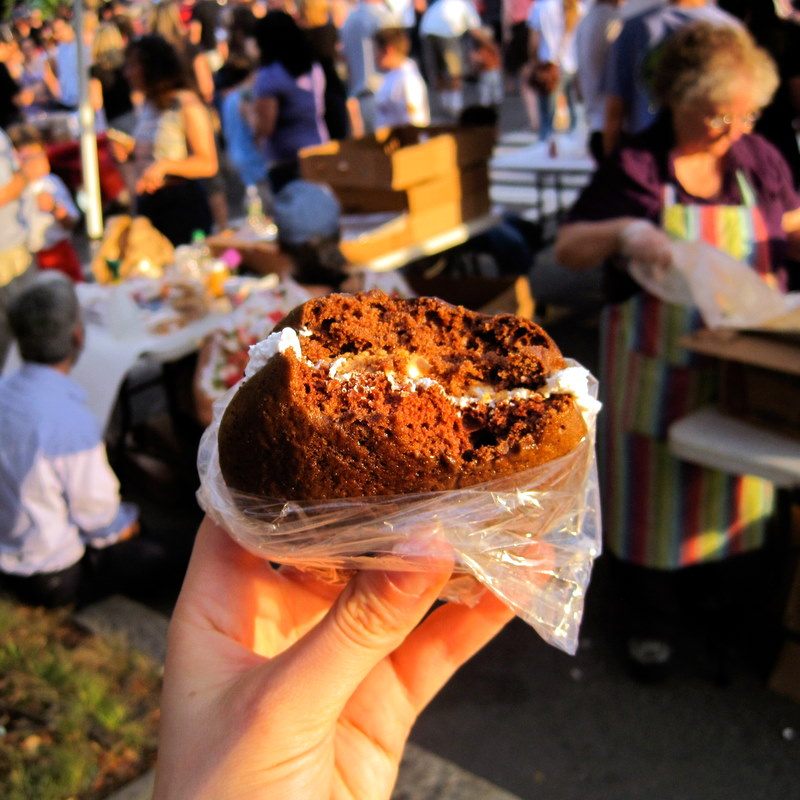 Whoopie Pie with Somerville’s Fluff Fest in back!

9. Marshmallow Fluff Rice Krispie Treats and Whoopie Pies at the Somerville, Massachusetts Fluff Festival. Did you know that Marshmallow Fluff was invented in Somerville, just a short MBTA ride from Boston’s center, and is celebrated each year at a festival? Did you know there are Fluff burlesque dancers at this event? Attend, ye Fluff lovers, and become full of sugar.

8. Fresh mangos in Ghana, cut a secret special way! I’ve always been obsessed with mangos, as they are not only scrumptious, but apparently also contain googobs of vitamins. However, it was always a horribly messy affair to eat them… until I learned a secret trick in Ghana! Click the article for instructions.

7. Portable American foods like sandwich wraps. It turns out that edibles are more delicious to my multi-tasking American self when I can walk whilst eating them. It also turns out that this moving-while-noshing is considered highly rude in much of the rest of the world. Viva America! 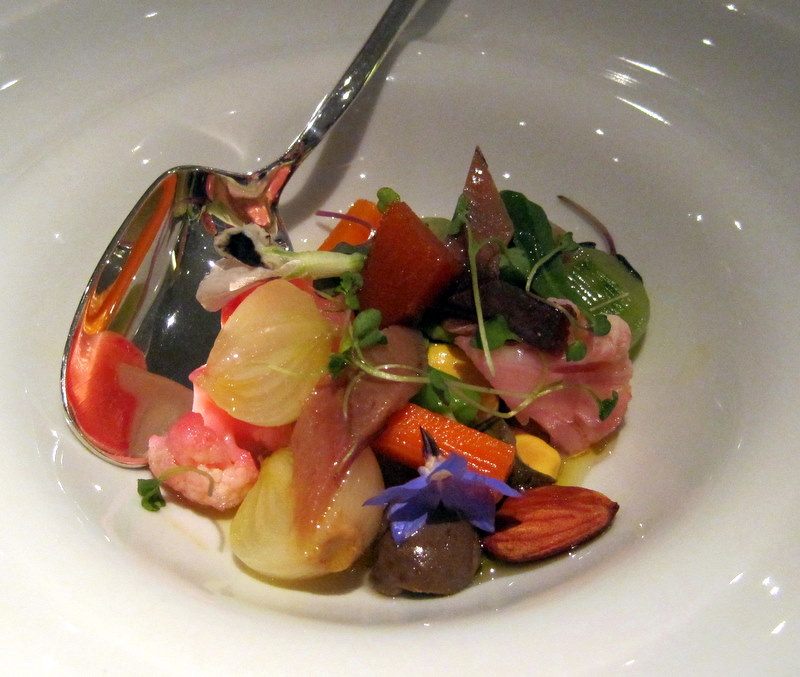 6. Any food eaten with the hands in Ghana. Culinary revelation of 2010 thanks to West Africa: all food eaten with the hands tastes 100 times better than food scooped with a utensil! There’s something about having sauce dripping between your fingers and dough sliding under your nails that makes eating into a full-body experience and ratchets up the flavor. The first photo of this article demonstrates the glory of eating yams with palaver sauce, and this link shows the squishy joy of Banku.

5. The crazy delicious 5-star restaurants in Spain where the #1 Travel Blogger and I feasted. Long story short, in 2010 I stalked the web’s top travel blogger while he was in Spain. A great friendship and tons of Ministry of Tourism-sponsored 5-star food resulted. Ay dios, Spain sure has a hot culinary scene growing! 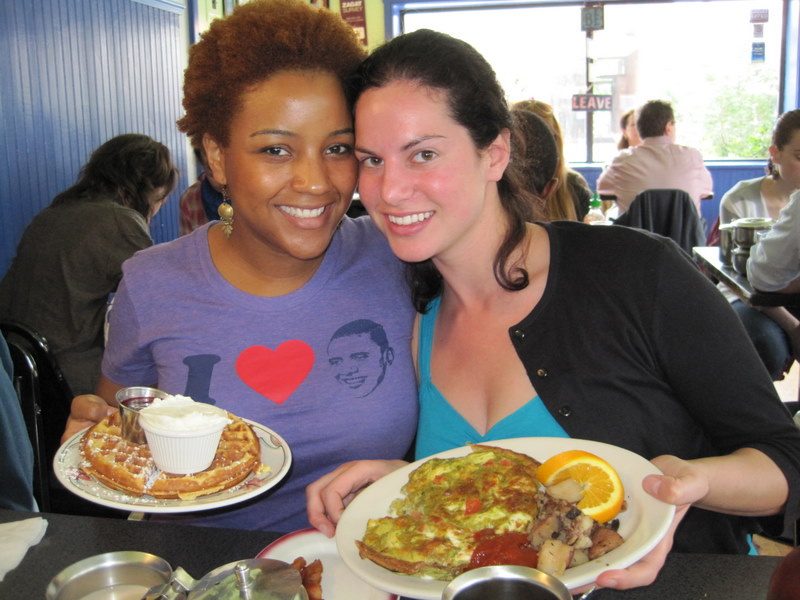 4. Fan Ice of Ghana. When it’s 115 degrees in steamy Ghana, West Africa, I assure you that nothing on earth will make you feel better than the icy milk substance found in the cheap plastic packets of Fan Choco, Fan Yogo, and Fan Ice. Incredible!

3. American Brunch, as documented in Philadelphia, Pennsylvania. The photo-filled article I wrote about scarfing a U.S. brunch with beautiful doctors in Philadelphia elicited at least one angry comment like: “That one plate could feed a family for a year!” But excess and deep fried glory is part of American brunch’s fame. Yay, eggs, hash browns, pancake towers, and sausage! 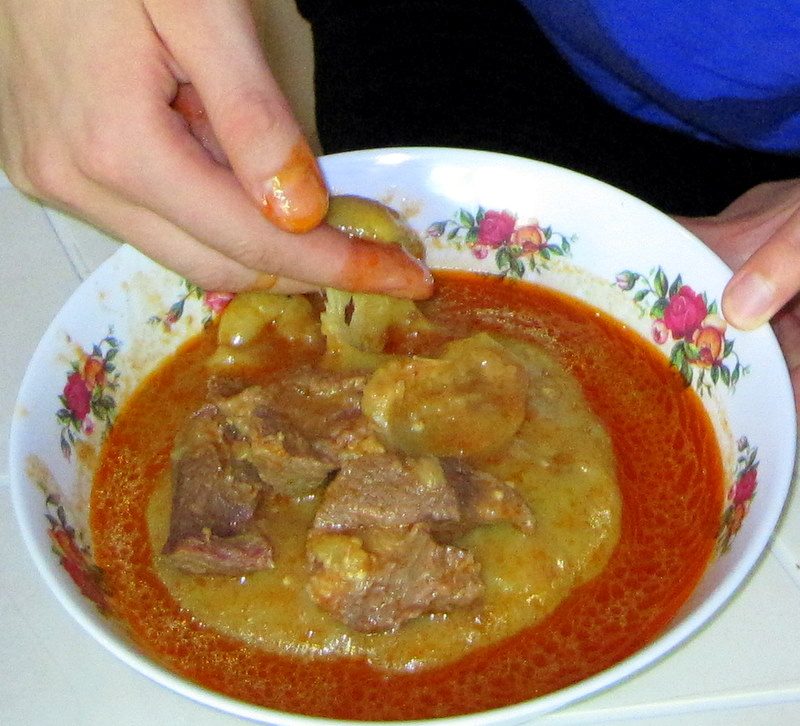 2. Churros con Chocolate in Spain. I didn’t believe it when my brother told me about these wildly popular fried dough sticks dipped in thick liquid chocolate. Once I tasted the heaven myself, though… ooh baby, I became a believer… and a worshipper!

1. Fufu of West Africa. Some love this plantain dough in red stew (eaten with the hands), and some find it bizarre, but I tell you fufu is my number one culinary revelation of 2010. I ADOOORE FUFU! How sad that it’s nearly impossible to find it here in Boston, but rest assured that my dreams of the soft yellow dough and stew dripping off my hands and lips shall live forever.

That was the top ten. Satisfied yet?

Now for the flip side: two NON-fabulous food situations that are NOT the most Yummy of 2010. 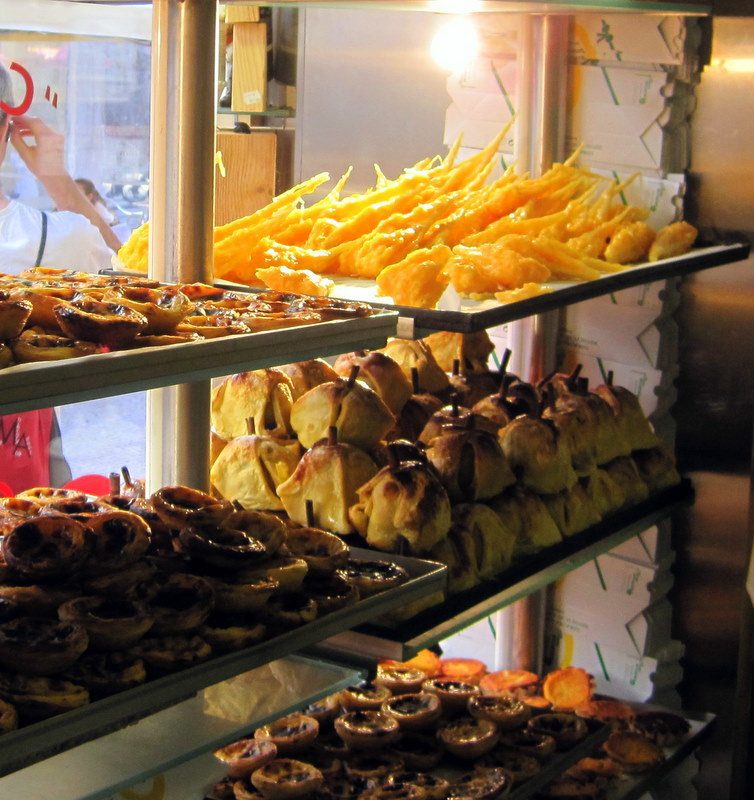 The spiky pastry in Portugal that tried to poke my bro!

As with the earlier entries, click the highlighted title for the full (indigestion-filled) story and photos:

NOT: The giant evil pastry that tried to eat my brother in Portugal! It may look innocent, but it’s dangerously spiky and weighed approximately fifty dense pounds.

NOT: The hot-dog eating contest we forced our ESL students this summer to partake in for one field trip! Those innocent students likely still have both animosity towards America and gas from that epic day.

OMG! I am so jaelous. That whoopie pie looked so good. It looked 10 times better than the regular ones and 10 times more unhealthy. Not that I mean it in a bad way. But overall it looks so good!!!

I thought this article was very detailed. Also the food that you talked sounded like it was really good and I really like the pictures you put in the article because it give me an idea of what it looked and it looked delicious.

Do you know that there's a Nigerian restaurant in Roslindale Square? Bet they sell fufu.

Nice! I'll have to check it out!

Wow those food's look delicious i like any food except for vegetables. I with i could eat with my hands because at out home we just use forks and knifes but when they r not looking i eat with my hands my fav food they showed was churros con chocolate i can't believe they put chocolate on it ! :-)

Oh my gosh! They're dipped in chocolate too? I want some right now!