Each full moon on steamy Haad Rin beach, Thailand, 10,000 to 40,000 people go absolutely mental. I was terrified to attend, hearing so many cautions, but as the moon swelled over the week of September first, the gravitational pull of every other traveler made it seem just plain foolish not to join. So I went! 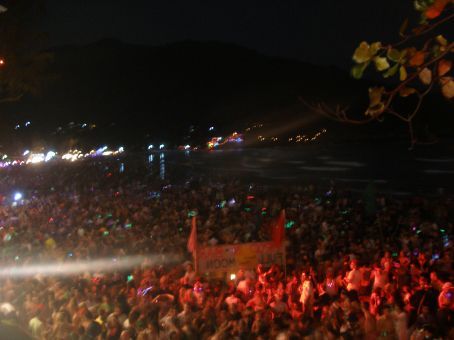 I loved it! And as a result, my shoes were thrown up upon and lost, and I am now living with a twenty year old British boy.

Midnight hit on September fourth, and across the beach by our bungalows, we could see the eerie pink glow of body paint coming towards us. The British girls had arrived. Our clan of Aussies, Scots, Brits, Canadians, and my American self united and began the moonlit walk to the festival beach. Louder, louder, brighter, brighter, more, more, and then (twenty minutes, wet feet, and many scruffy dog friends later) we exploded into the blaring music and the giant beach!

Seven hours, and the things we saw.

* Tiny florescent bikinis and striped luminous body paint, and all of these people dancing, dancing, spinning, laughing and raising their arms to the fresh whipping night wind!

* The wide, wide moonlit ocean, dotted with nightswimmers (alas, each year people are swept to sea and drown), and hundreds of pee-ers. “It’s like a giant ur-i-nal!” our British friend said in his thick accent, emphasizing the “i”.

* Thai fire twirlers, and a giant flaming jump rope that seared the backs of tourists as it whipped out of its handler’s palm!

* A roped-off “sleeping area” in the sand (sweetly guarded by police officers) where exhausted dancers flung themselves to rest, making sand angels in the fluffy whiteness and staring lovingly at the fat moon.

Anyway… around five am, I was innocently sitting by the sleeping area when some weird German leaned over and threw up on my dear green sandals. Dammit! “Let’s move,” Jesse the Brit said, and shoeless, three of us started up up up to the very far end of the beach. Every hundred feet was a different beat thump. “Tonight’s gonna be a good good night!” sang out one, then: “One, two, three, four,uno, dos, tres !” and then anonymous: “Boom boom BOOM bum”. Sweat, jumping, gyrating, cartwheels, headstands in the sand, salt spray… whee !!!!

Thousands of grinning, luminous faces and peeing bodies later, we reached a low mountain surrounded by silver boulders which jutted into the sea. Up we climbed! Rough rock on bare feet and soft hands is like a kiss with a bite. And then we were there, exactly where we were supposed to be as the faintest tinge of sun whispered up: atop the biggest boulder of the mountain, staring back at the pulsing lights and rhythm of the mile-long beach. I could feel the smiles from each section. Every sound system merged into one whole new song: the soundtrack of rainbow lights sparkling across sea.

We leaned back onto the moonlit rock together, each with a hand on the others’ salt-swept hair, and we watched the sky. Softly, lighter. Then, lighter! Then: AHHHH!!!!! LIGHT!!!! It was an unbelievable feeling; we lost our breath with the joy of the opening of September fifth.

And then it was definitively day. How did it happen? None of us were exactly sure, but it was time then to descend from our mountain and shuffle towards sleep.

The beach had become a stew of lost electronics, shoes, shirts, urine, vomit, and passed out revelers. We picked around hopefully in the trash/treasure pile near where I’d last seen my shoes, but there were only ten other tragically unknown pairs. Furtively glancing around, I stole an abandoned pair (too-small, basketball-emblazoned monstrosities), hoping the universe would see it as just and forgive.

Half an hour, much sand, and many more mongrel dogs later, we were back at our bungalows, dizzy and ecstatically hollering, “We survived Full Moon! We did it! We loved it!”

“Whoops,” said twenty year old Jesse, “I forgot to pay for my room today and now I’m locked out.”

My sisterly and cheapskate instincts took over simultaneously, and Jesse moved into my spare twin bed (platonically!) meaning $6 a night lodging and a friendly pseudo sibling. A good deal!

Thus concludes the story of how we rocked out the Full Moon Festival, Sept. 4, 2009, in Ko Phangan, Thailand, how my shoes were thrown up upon then lost, and how I came to move in with a twenty year old British lad.

Hire Me! Publish Me! Make me famous, rich, and arrogant!
Read Next Post →
Click here to cancel reply.

It is funny how everyone got crazy at full moon. It sounds like werewolves. They go crazy at full moon too. I wonder why someone stole your shoes. It is crazy that there are missing stuff everywhere. Was the party sort of like a holiday? I would have also stolen a pair of shoes if I couldn't find mine.

Louisa said... Ew, barf is gross. The chocolate pancakes sound awesome. Good to know American pop music is going strong over there. Have you gotten into any Thai pop songs?

Luddy Sr. said... What an amazing party! You re-created the atmosphere beautifully.