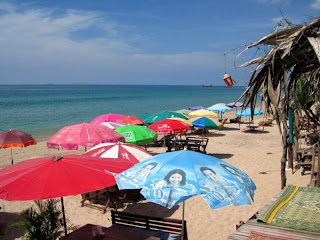 Luigi had a revelation as we watched Ko Lanta’s azure ocean behind the “Free Wi-Fi” sign.

“I only need to be supervising the sausage company in person for six months of the year, during festival season…” he murmured slowly, putting thoughts together, “and the other six months I’m just behind a computer, coordinating sausage marketing and production.”

My British sausage-making friend gazed out at the white sand stretching luxuriously to our right and left. “I had planned to rent a tiny apartment in London next year,” he continued, “but I’m suddenly realizing–“

I chimed in, catching the excitement: “You’re realizing that the rent for one month in a tiny apartment in London would pay for a whole six months living like a king here in Thailand!” 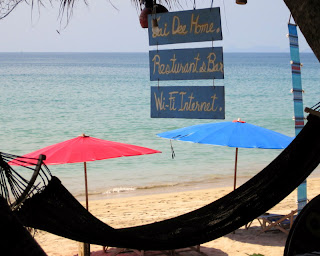 A crystal wave crashed in front of us in triumph as Luigi nodded and bellowed, “YES!”

More and more people are using the Internet to become geographical unchained, and suddenly it becomes possible that one could do one’s job MORE economically and more comfortably from a beach in Thailand than from a drafty tenement in Hackney!

Could YOU be one of these vacationing workers, even for a short time?

Last week I met a lovely family consisting of an Australian man, a Singaporean woman, and the two politest children I’ve met in years. 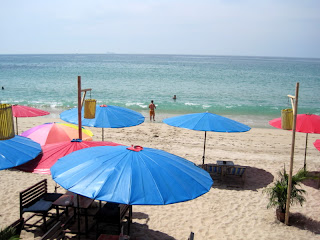 “We were miserable living in Singapore and spending a fortune on rent and other expenses,” Jack explained as his curly-haired daughter snuggled with her mother, “and then we realized: with Asia’s low budget airlines, we could move the whole family to the Southern Thai islands to live, and still fly back to attend monthly meetings in Singapore for less money than a full meal back home!”

Jack’s wife chimed in, “There are some lovely expat communities outside of the tourist centers, and the locals charge us local prices because everyone has lived there so long, now.” 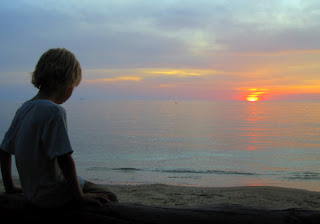 “I can speak both Thai and English,” said the sweet little son, “and our school is starting Chinese lessons next year!” The boy then offered me a piece of candy, cementing my adoration of him.

It’s a leap of faith, though, to move your job, much less your life, to another country, even for a few weeks… isn’t it?

But know this: more and more people are becoming geographically unchained, and if you’re shivering a little from the wintry cold as you read this, perhaps you might look into it, too! 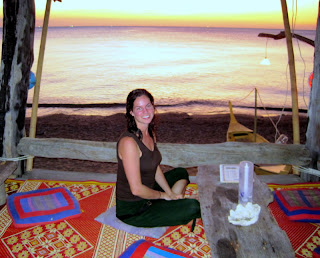 Fellow teachers, I suppose we can’t exactly maintain discipline and pedagogy in our 31-student Boston classrooms via webcam from across the world, BUT my friend just picked up an online ESL tutoring job in which she earns money by Skyping in English to kids in China!

(The youngest student started drawing on the computer screen in crayon, but the rest were well-behaved and attentive.) Earning money on the beach over school’s summer vacation, anyone?

One drawback: I got four mosquito bites and had to brush off six ants and one overly loving kitten while writing this article. Being in in a lovely location is still so very worth it, though! I may be back in busting Bangkok today, but two days ago, those waves looked heavenly in person!

How old was that little boy who could speak two languages?

Chris said... I hope to be doing just that within 12 months. Living and working on the beach what more could you ask for. Like you said a months rent back home is 6 months on the beach, how can you pass up a lifestyle like that

Franny said... Can you add a topic to your list (next to "funny" and "useful") that says "Just made me so jealous I vomited on myself"? Thanks.

nodebtworldtravel.com said... Location independence is the new movement, especially with the lack of job security worldwide.

Franny said possibly the funniest thing I've seen on a blog in a long time!