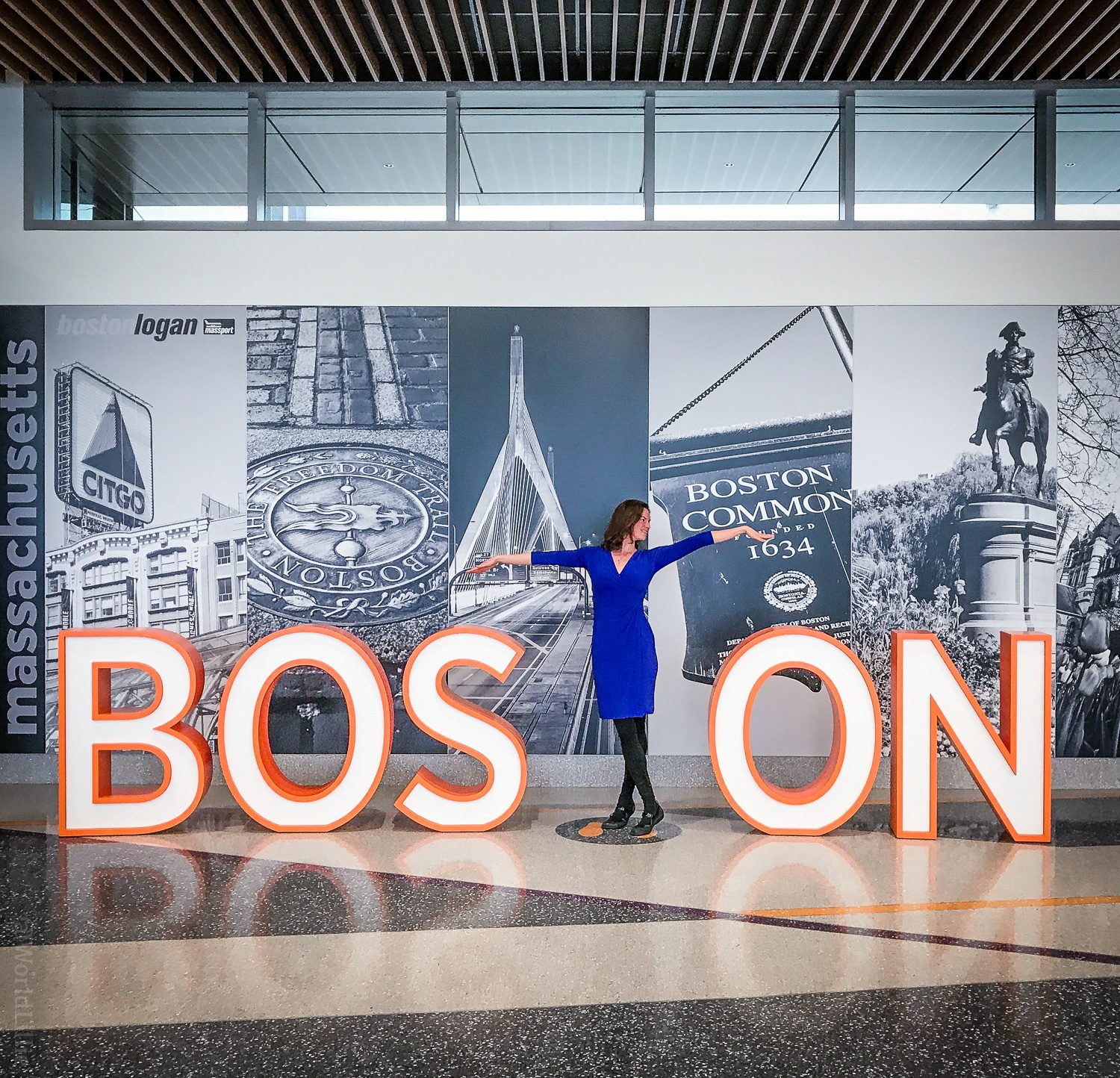 A liminal space is the threshold between two eras, places, or states of being. This April Vacation, I inhabited the liminal world from head to toe, and nowhere was it more literal than the day I spent in Boston’s Logan Airport: in a glamorous airline lounge, even ON an airplane… and yet going nowhere.

In life stages, I’m Liminal Lady (heck — I’ve even produced multiple articles and cartoons defining a liminal space), which is what led to this odd, immobile airport day. You see, because we have two children under 3.5, my husband and I simply couldn’t muster the oomph to “vacation” (aka cram four fussy people into one hotel room) this April break. Thus, we simply lingered here in Boston all week, liminal-y, doing laundry.

Then came the email: “You are invited to tour the new British Airways luxury lounge at Boston Logan Airport for a special press reception.” I hurled aside the bib I was rinsing and leapt at the flash of glitz, RSVPing, “YES PLEASE!” and vaulting over the baby gate to pick out my outfit. 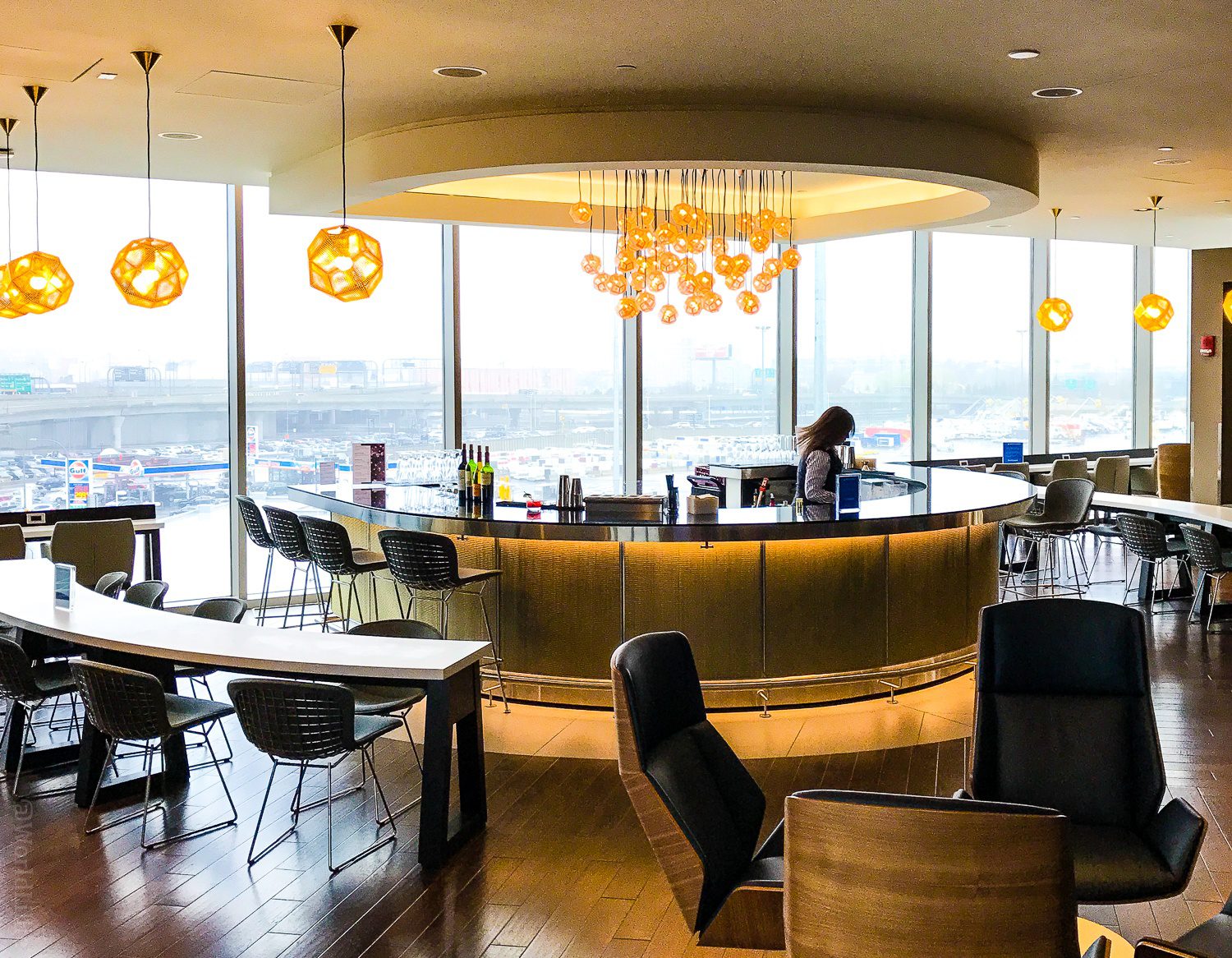 The luminous centerpiece of the new British Airways lounge.

The new British Airways lounge did not disappoint. While the previous iteration was apparently deep in the basement level, this lounge now soars above the city, aglow in sunny glass. If the clouds weren’t the thickness of yogurt the day I toured, a glorious panorama of Boston’s skyline would have winked through the main windows. (Logan is right next to the city, which is sweet for both transport and views.)

I caressed the lounge’s multi-shaped chairs, ogled the art (local, no less), and chowed down on the fresh quinoa and vegetable lunch. Having food prepared right in the lounge kitchen is a winner, and apparently is a rare thing in the realm of lounge life.

Confession: I skulked past the lounge’s fancy shower several times, tempted to ditch the other journalists and get clean without slipping on bath toys. 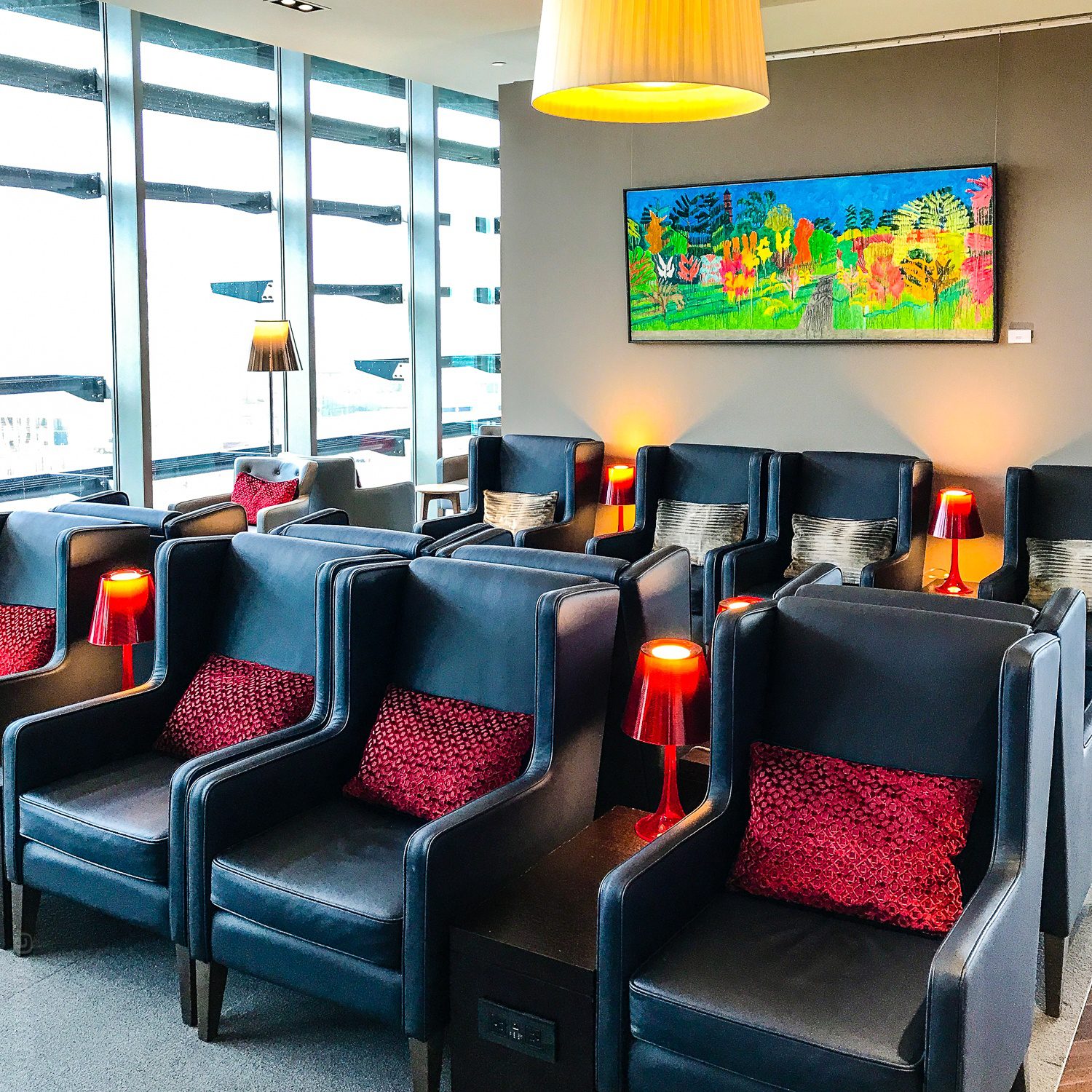 Wouldn’t you be tempted to stroke these chairs, too?

Then came the big reveal: Not only were we touring the lounge, but we were about to actually board the famous new addition to the British Airways fleet: the Airbus A380, which is the world’s largest commercial passenger airplane!

Because of the lounge’s special VIP boarding entrance, we were able to walk directly into the plane — no slog back to the main gate required. Ooo! The size of the aircraft dizzied me: 238 feet long and 79 feet high, with a wingspan of 261 feet. As the crew proudly toured us along the 469 seats (over 4 different classes, including fully reclining seats with privacy walls), I had to brag to someone what I was seeing. 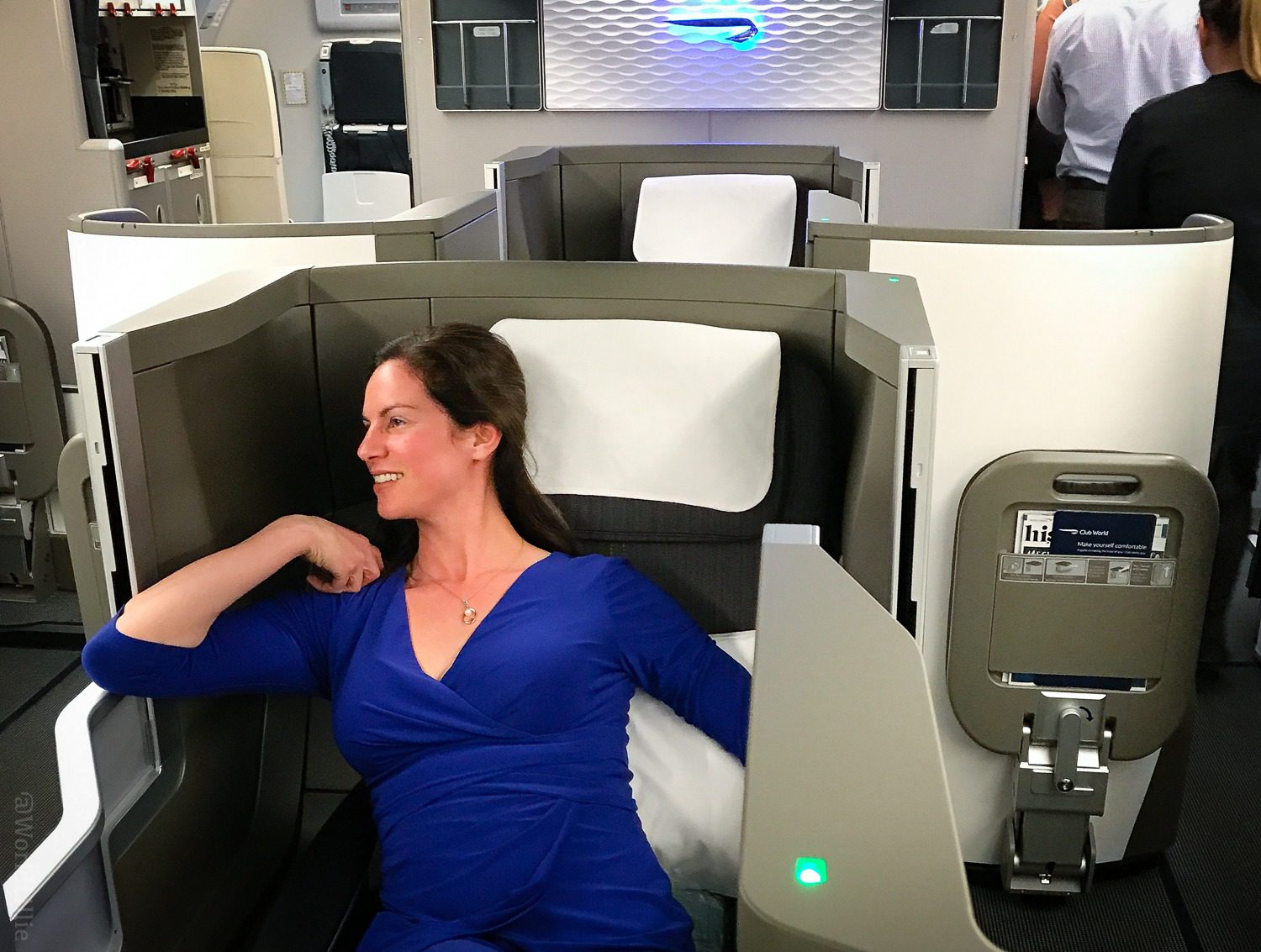 Max didn’t miss a beat. “I am well-aware,” he posted in reply, unimpressed with my lack of airline knowledge.

“Do you know the plane even has hidden cabins with BUNK BEDS for the crew?” I whizzed back, grappling to stay hip. “Or a bathroom big enough to fit a wheelchair, with room to spare?”

“I sure do,” the lad responded. It was only then that I noticed Max’s Instagram bio: “Future Pilot.” No besting that guy, darn it. 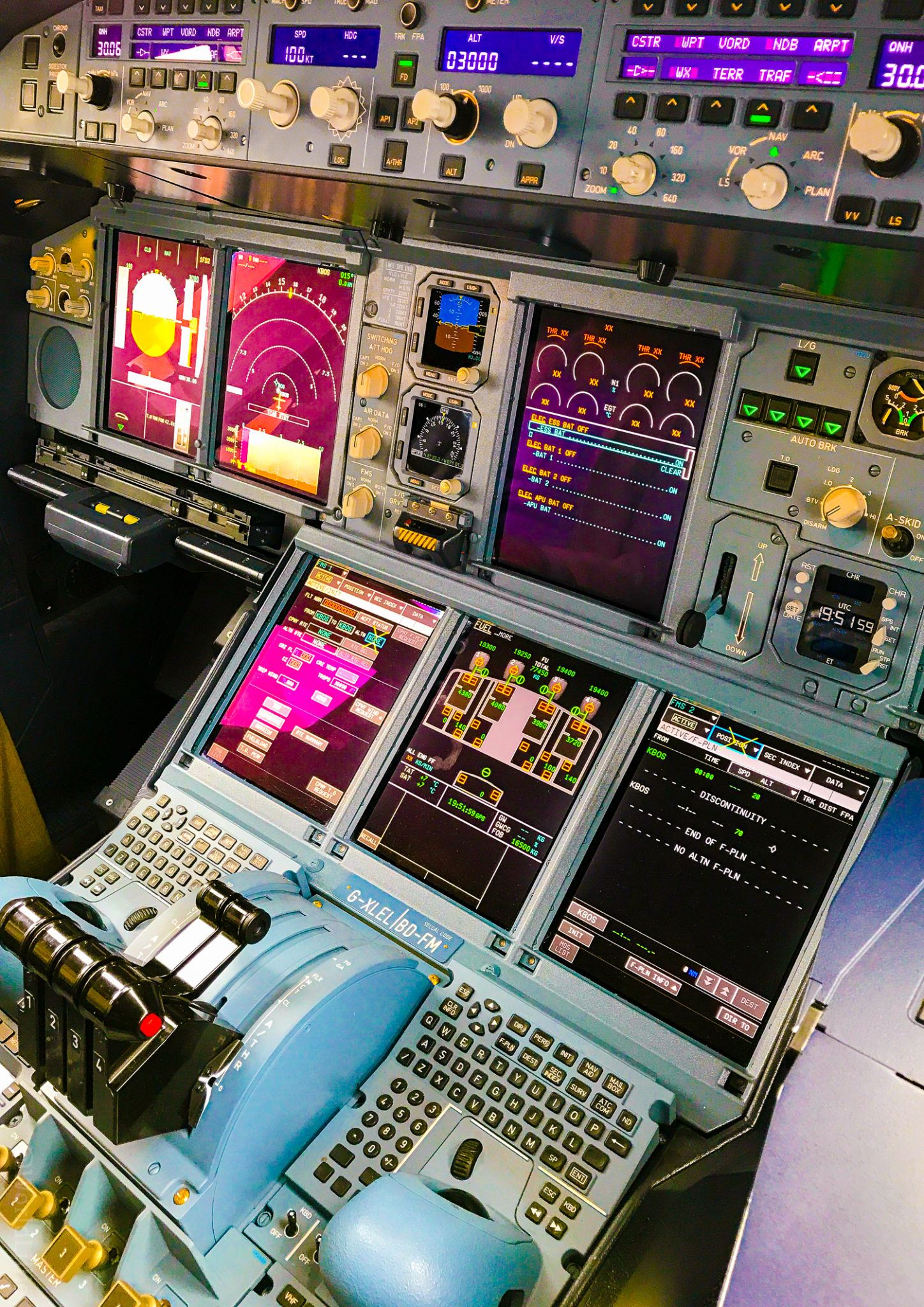 Ever admired how pretty airplane controls are?

The tour ended and we shook hands and crossed back out through security. I turned the car towards daycare pickup, full of the chocolate chip cookies I’d crunched from the British Airways lounge cookie jar. (Find it next to the towering espresso machine.)

Liminal spaces can be bittersweet, with the pull from both sides of the threshold stretching one’s heart. Are you home, or are you away? Are you domestic or exploring? How do you dance in the tensions of being both an adoring mother of two, and an independent adventurer?

After four years of either being pregnant or perma-nursing, I’m finally passing through the threshold, back into the world of solo travel… in less than two weeks when I board a plane to Alabama. The British Airways lounge and airline tour reminded me how much I crave that take-off, and the return after a good trip.

Enough of being grounded. Let’s end this article with a photo I took on a different day, showing my city from above at LIFT-OFF! 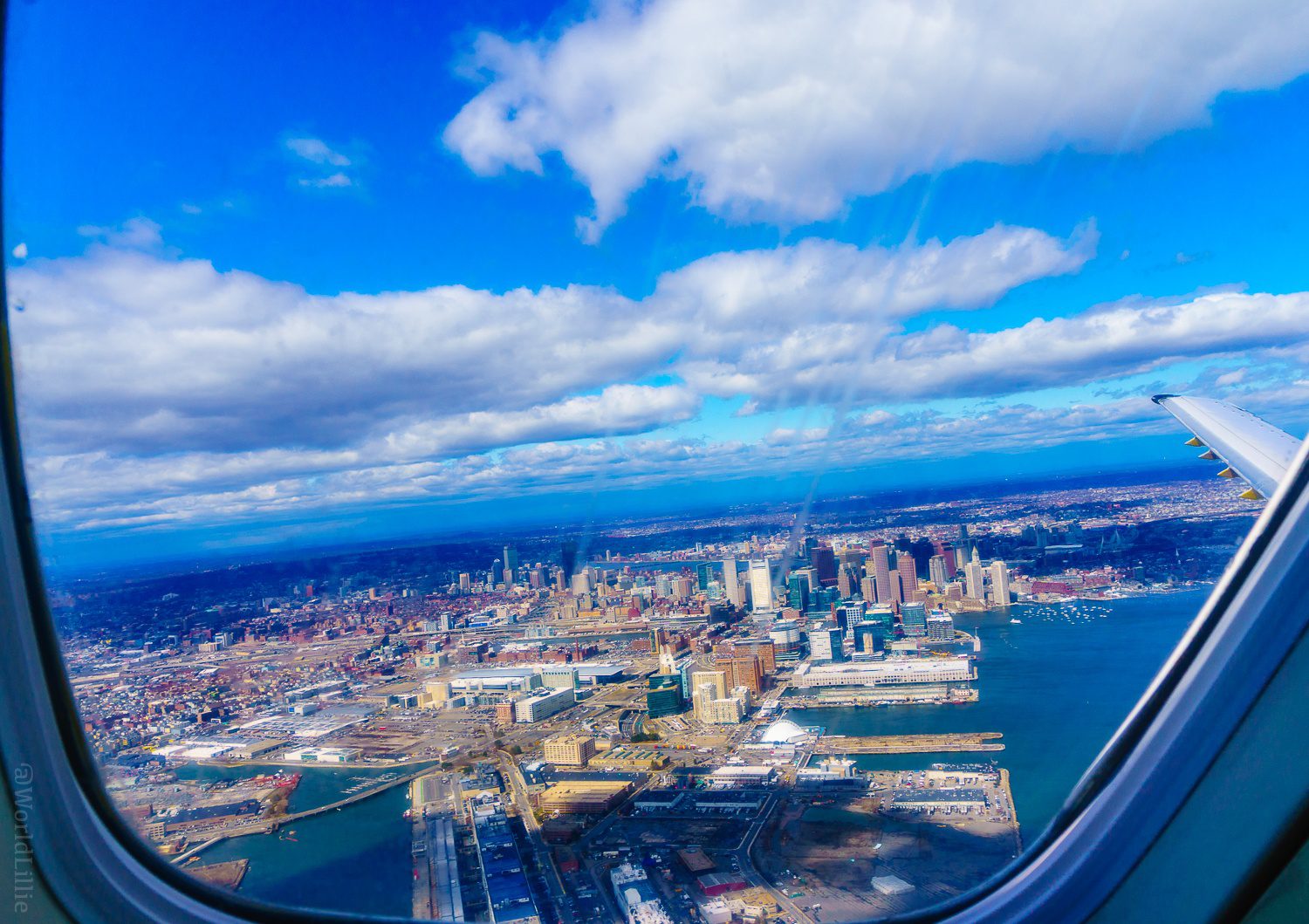 Boston, you look lovely from on Earth as well as above.

So what about YOU? What has been your experience with luxury lounges at Logan, or massive airplanes, or liminal spaces? Do share!

All the perks of air travel without any of the downsides â€“ so cool!

Great pictures and wonderful place. Thanks for sharing

This looks like a beautiful airport. I usually arrive to Boston by car from NYC, I never realized the town has such a pretty airport.

What a fantastic place! And towering espresso machine, YES.