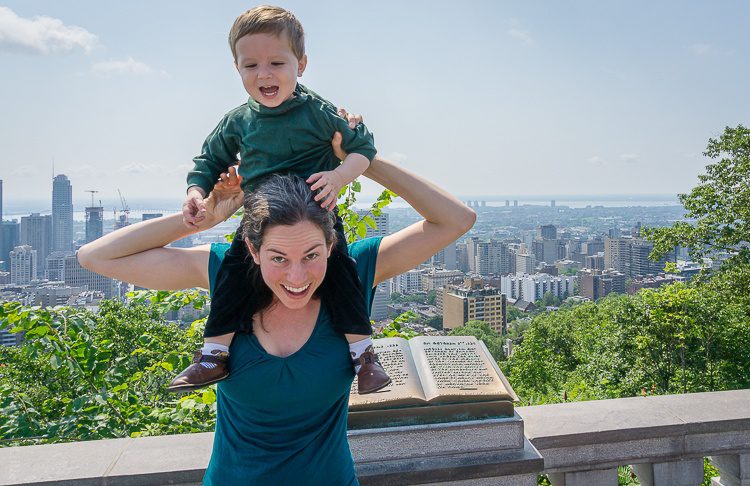 We’re on top of Montreal!

People have been yelling at me about my first “Montreal with Kids” article, furious that their yearning to visit the city is now unbearable. Well, watch out, because the advice in this second Montreal family travel installment is even more alluring. 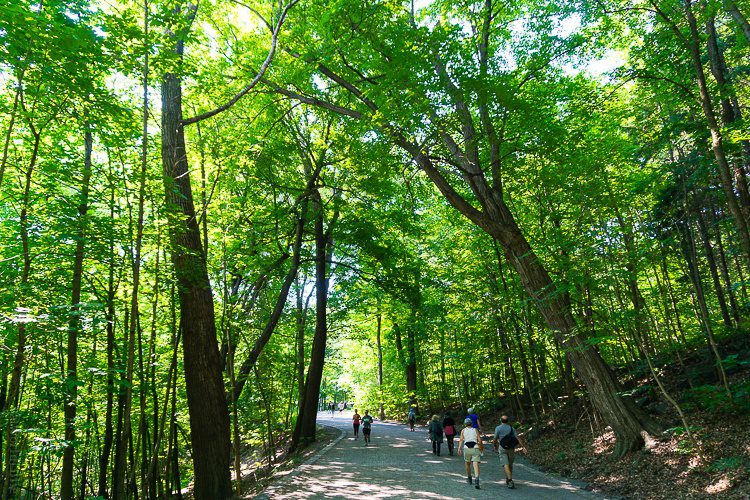 Parc du Mont-Royal will give your family many happy hours.

As with the first article, here I shall lay out a great family itinerary you can do over one or two days in Montreal. Do keep in mind that the city is quite big, so doing this all in a single day is a workout! 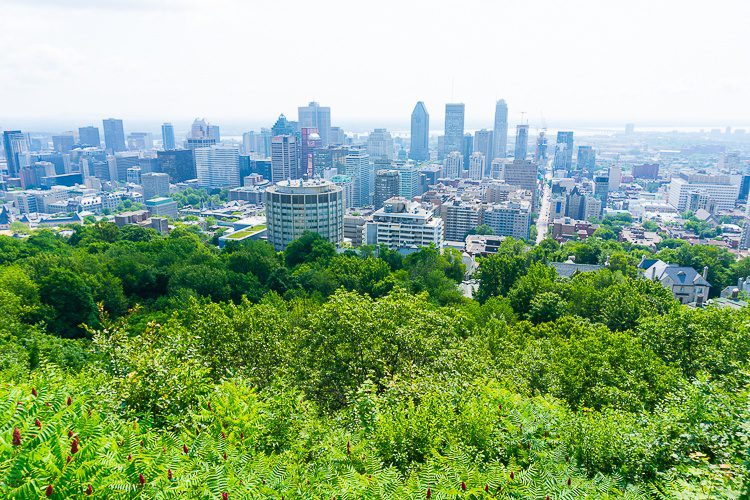 1. Start at Parc du Mont-Royal. The mountain from which Montreal earns its name is a dream come true for energetic kiddos, athletes, and anyone enjoying a relaxing stroll in nature. You’re rewarded for your hike by a breathtaking view of the city, and a pretty building that has both restrooms and snacks!

Do be warned that there is really only a single path that is stroller-accessible, and if you enter this path from the far end (as I accidentally did), you will accidentally end up walking miles of spirals before getting to the overlook. Check a map before embarking so you can identify the shortest route up. 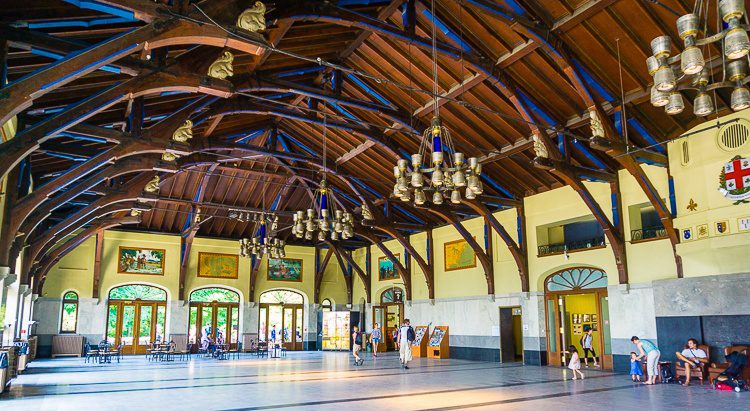 The grand building atop Mont-Royal has restrooms and snacks, parents!

2. Play “find the art!” Montreal is awash in delightful public art, as there was a rule that 1% of a building’s budget must be put towards pretty pieces for passers-by. Further, many of the city’s museums have turned the streets around them into playful art exhibits.

The most famous example of this is the Montreal Museum of Fine Arts (full of creative inspiration!), which boasts this jolly yellow Chihuly explosion outside… 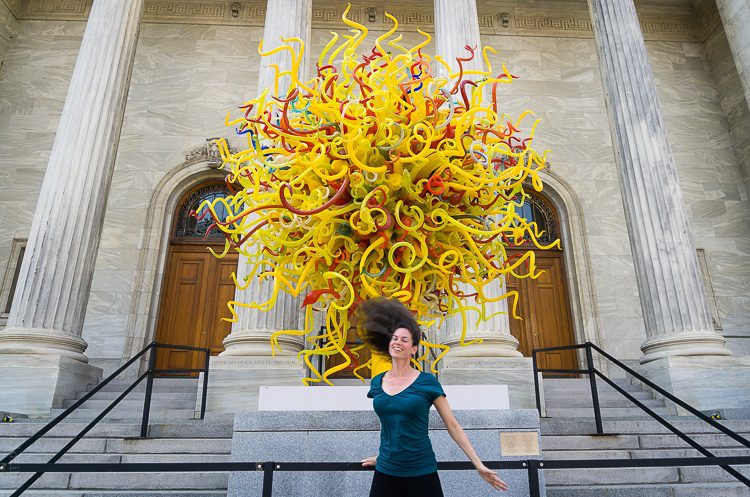 The famed yellow Chihuly sculpture outside the Montreal Museum of Fine Arts.

…And which converted the street next to it into a bright green maze with orange “sofas” that I admit I lounged on for over an hour after our long Mont-Royal trek. If you go to this location and don’t see this maze, do not be confused, since they change the exhibit periodically. Who knows what will be there next? 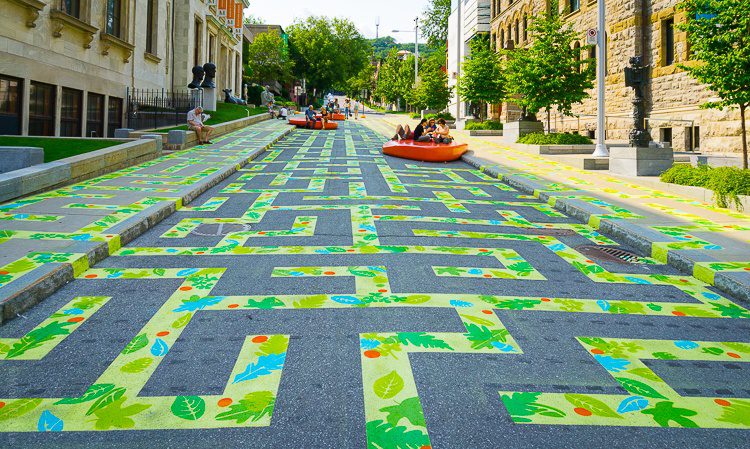 Montreal’s Museum of Fine Arts has a fun art alley next to it.

3. Wander The Village. Like bright colors? The historically gay neighborhood called “Le Village” has giant neon pink beads strung above the street as far as the eye can see! Colin, Devi, and I had a nice afternoon trotting down this long street, people watching, and ultimately eating some mouth-watering pizza. 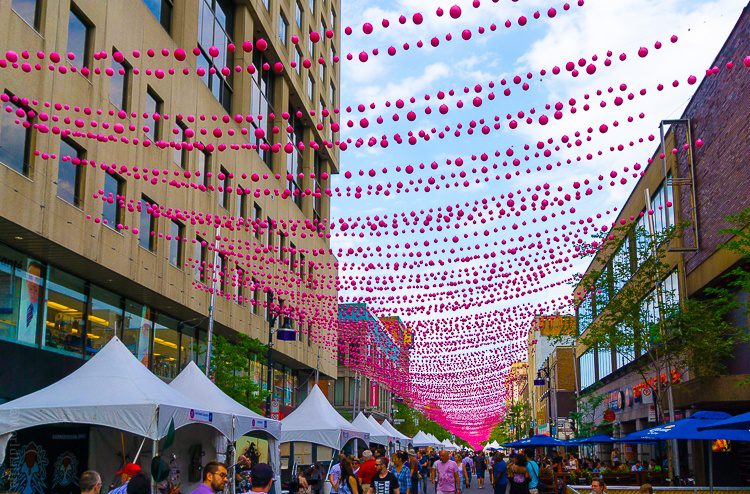 You can’t miss the pink beads decorating blocks and blocks of The Village.

Near The Village, you can also spot architectural gems like this church: 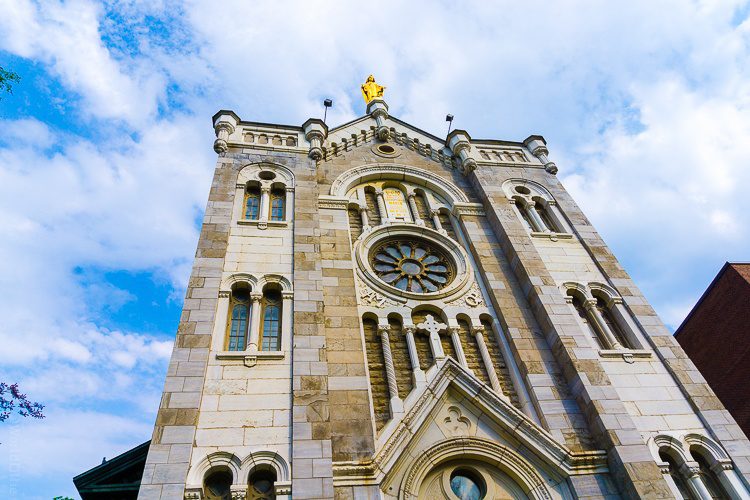 A pretty church near The Village.

There is also a sweet little park featuring an ariel net sculpture, and a performance area where circus acrobats were scheduled to flip their way into people’s hearts later that evening as part of the circus festival. One of us (the shortest member of our party) was having a meltdown, so unfortunately I didn’t get any photos of the performers. 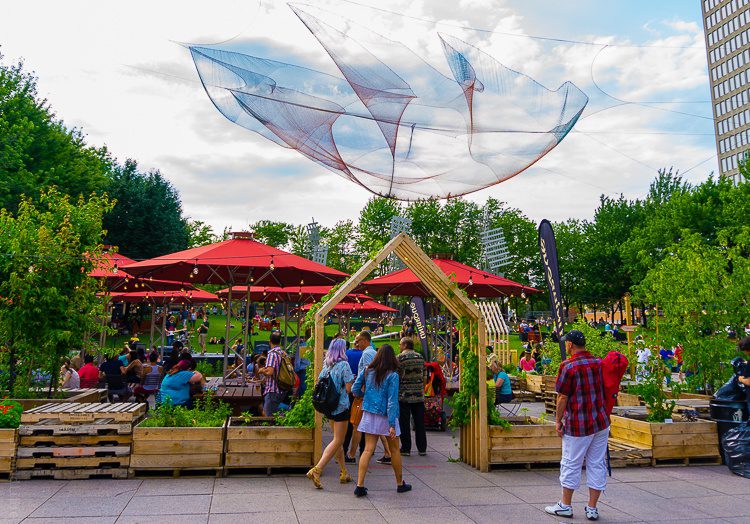 An outdoor eatery, park, and art installation near The Village.

4. Explore the Underground City. A lifesaver in Montreal in the case of bad weather is the sprawling “Underground City” which features shopping, food, and entertainment. When we visited, they were setting up a cute little stage for “Jazz School for Children” as part of the Jazz Festival! 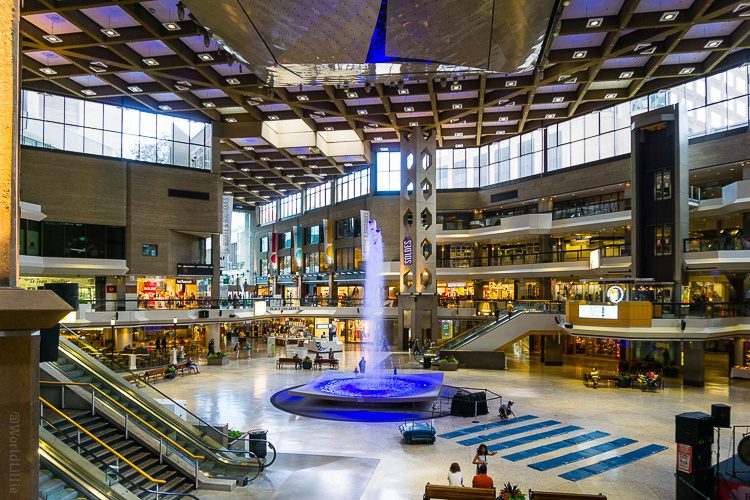 The Underground City in Montreal offers days of fun if the weather turns bad up above.

While you’re downtown, keep your eyes open for more art. A Canadian friend I was walking with insisted I take this photo in front of Maple Syrup public art, as she felt it powerfully conveyed the Canadian spirit. This is my attempt to be very excited about maple goo. Hehe. 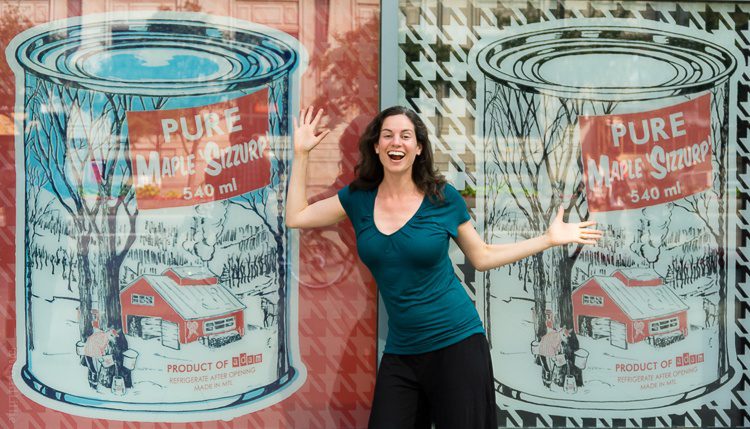 5. Go back to your hotel and get a babysitter! Here’s priceless tip we learned during our Ireland family travel: If you are staying at a high quality hotel, it is likely their Concierge service offers vetted babysitters so you can actually enjoy some of the adult pleasures of a town!

Either call ahead or ask the moment you check in, as some hotels require one or two day’s notice. We were staying at the Omni Hotel (click for current availability and deals) near the Museum of Fine Arts, and ended up hiring a babysitter two different nights through their blessed Concierge service for less money than the going rate in Boston! 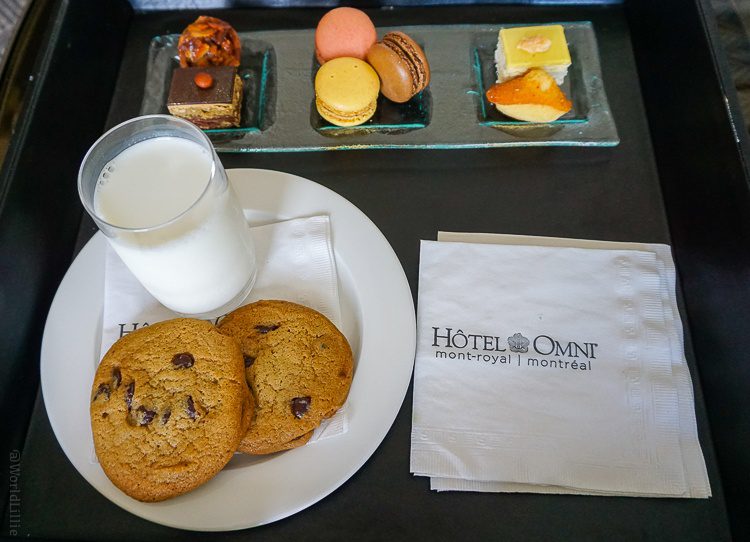 This dessert welcome plate in our hotel room made me VERY happy.

Each of the babysitters was lovely, and after spending 24-7 with our energetic little guy, it felt delicious to shower, put on a dress I knew wouldn’t get drooled on, and step out on the town with my husband! 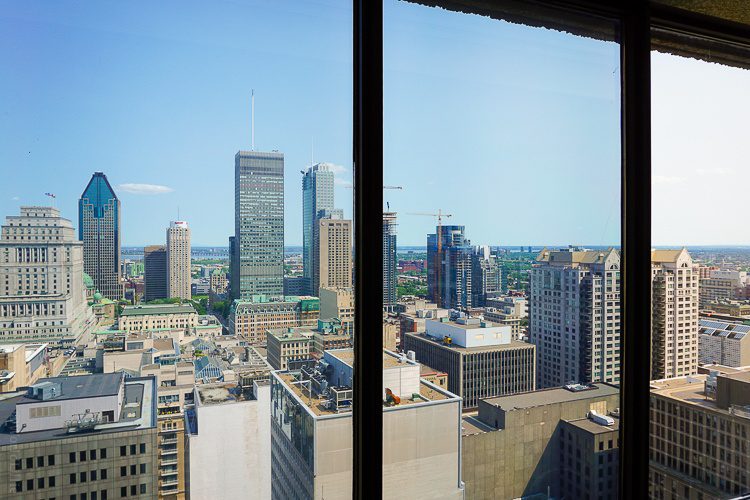 A mighty view of Montreal from our Omni hotel room.

6. Embrace Montreal’s food scene. We had been told by the friendly experts at Tourisme Montréal that the food in Montreal is incredible across the board because of the fierce competition between restaurants, and boy did we find that to be true. Colin and I ended up at a low-key restaurant called Nocochi near the Museum of Art, and ate some of the best pasta of our lives. 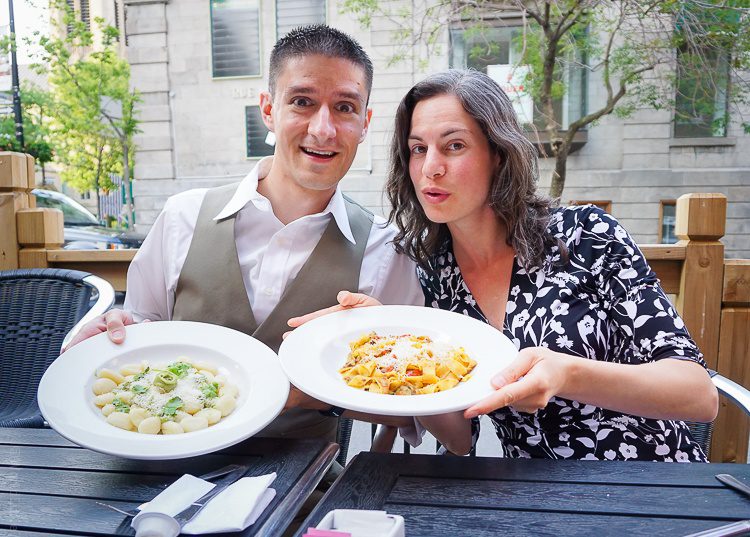 Allow me to zoom in for a moment on Colin’s avocado and lime gnocchi. Who would have thought that a flavor combination this unique would be so good? Mmm… it was. 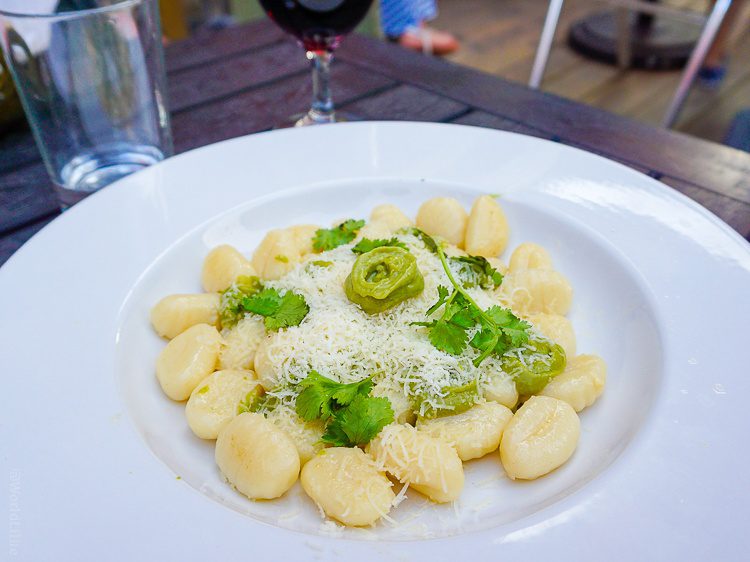 7. Rock out a festival or three! Now, before I go on to tell you about the world-famous Montreal Jazz Festival we attended, let’s back up for a moment and acknowledge that Montreal may be the festival capital of the world.

In the mere four days that we were in the city, there were at least THREE major festivals going on: Jazz, Circus, and Poutine and Ribs. (Seriously, a Poutine AND Ribs festival?! Now that’s extreme.) There are over 100 festivals a year in Montreal, so I bet you $5 that there’s one going on whenever you visit. 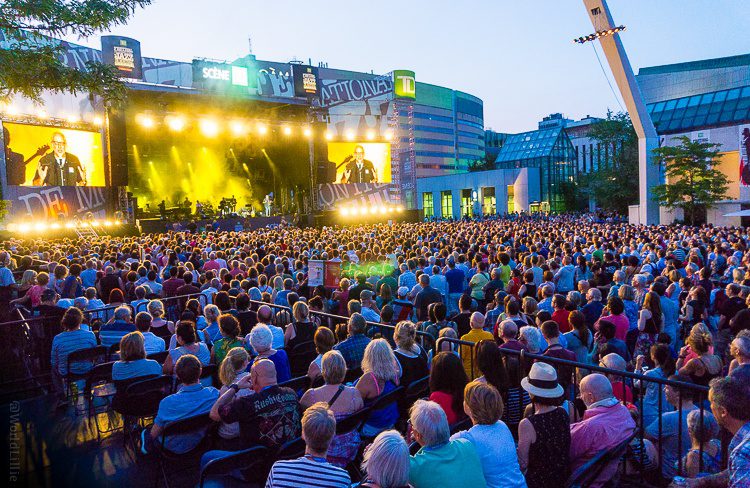 So… the Montreal Jazz Festival is out of this world. I’m not even a jazz fan (it’s not that I don’t like it — I just don’t know much about it, and my mind wanders to cookies instead of saxophones), but even I adored my time at this festival. First, the energy of the crowd is exhilarating.

Thousands of people were packed into the main stage to see the evening show as we arrived, and I found my heart thumping and mouth grinning, despite never having heard of the artist who was taking the stage. 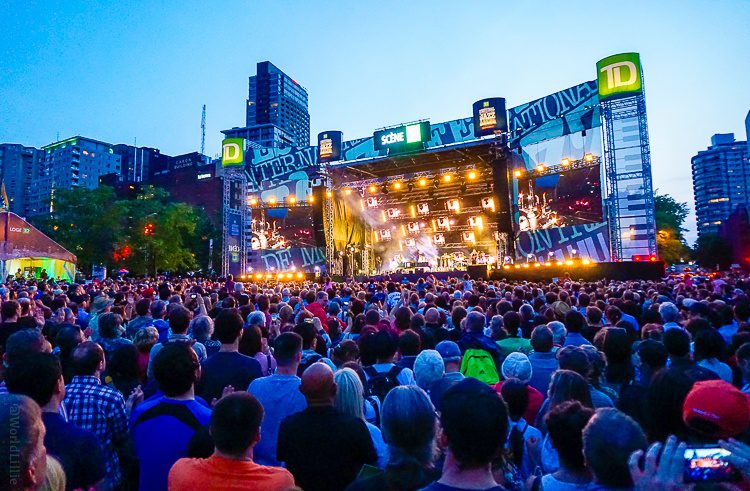 Such an exciting atmosphere!

As the singer grabbed the microphone and began belting out her first song, my jaw dropped. How could I never have heard of such a fabulous artist? This theme ran throughout the two evenings we attended the Jazz Festival.

Over and over, Colin and I scribbled down the name of the singer, vowing to buy their album. Who knew that Quebec had such a vibrant music scene? And why are Americans so oblivious to its numerous talented stars? Sheesh! 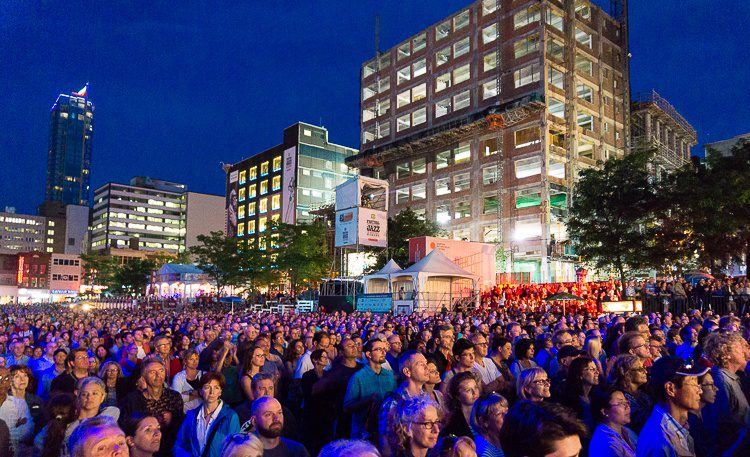 A huge crowd at the Jazz Festival’s main stage.

If giant shows aren’t your thing, never fear because the Jazz Festival has tons of smaller stages, too. It’s a thrill to wander the streets, eating the plentiful food and snacks for sale, and listening to a performance here and a show there.

For those of you with slightly older children than our little 20-month-old traveler, do know that the Jazz Festival (and all the other festivals we saw in Montreal) are extremely child-friendly. If you look closely at some of these photos you will see lots of dads with young sons and daughters on their shoulders to better see the music. 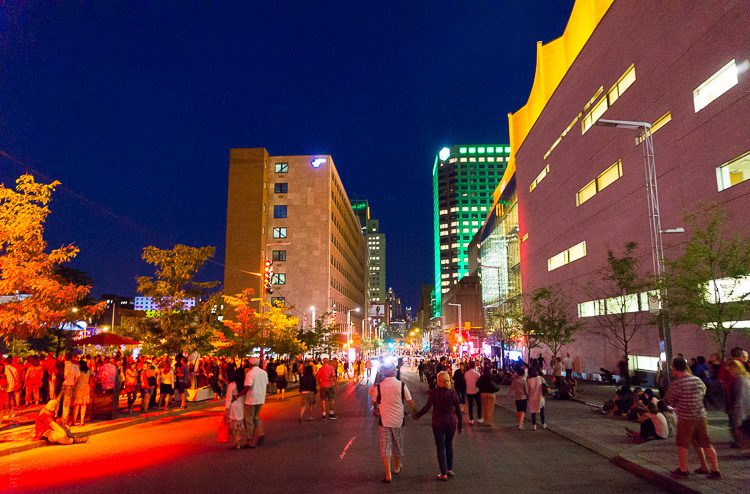 One of the smaller stages at the Montreal Jazz Festival.

Finally, if you abhor standing, as I do, consider trying to talk your way into the bench-filled VIP tents that line the festival stage. I totally lucked out in that one of the tents was sponsored by Turkish Airlines, so I just greeted them with my phone open to the article I wrote about my trip to Turkey with their company and was kindly offered entrance! 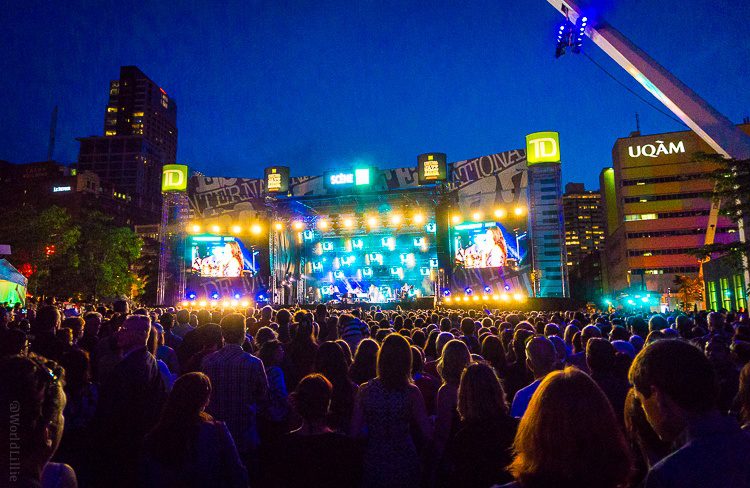 Such excitement at Montreal’s Jazz Festival!

8. Rest well. Colin and I returned back to our hotel giddy and smiling. Our baby was sleeping peacefully, and the kindly babysitter told us he was “quite clever” because he spent an hour putting crayons into a bag and taking them out.

That’s my smart little guy! We thanked the babysitter for allowing us a night out, and fell fast asleep in our downy bed. According to Colin’s FitBit, we had walked fourteen miles that day. 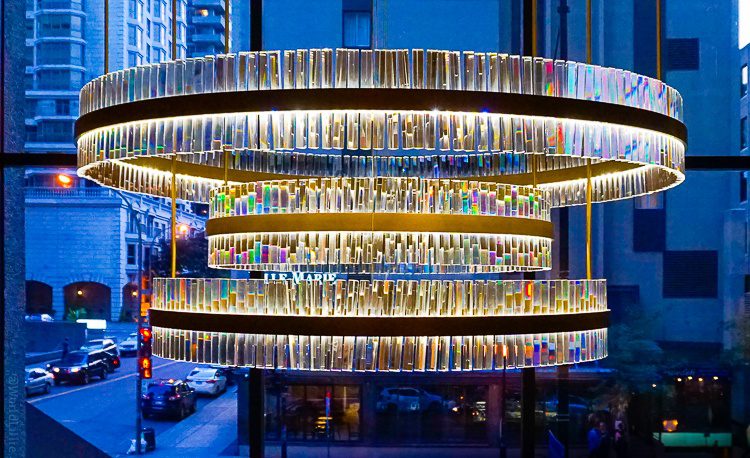 Both Devi and I were entranced by the Omni’s chandeliers.

Montreal can be an overwhelming city for parents. There are too many attractions to do in a short visit (I didn’t even come near the part of the city with the Planetarium and Biodome, but hear both are great), and the long distances between sights can be daunting because many subway stops have no elevators, and thus are not stroller-accessible.

(Apparently there are stroller-accessible buses, but we didn’t have time to figure them out.) That said, with a realistic list of spots like this which both kids and parents will enjoy, Montreal can really be a winner for families. 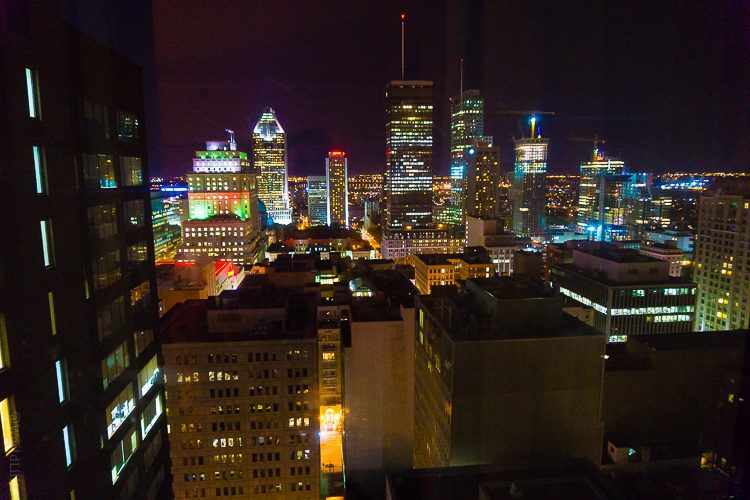 What a view of Montreal from our Omni Hotel room!

See all my posts from our Montreal to Quebec City road trip here.

If you enjoyed this article, consider doing your search for Montreal hotel deals by clicking here, and search for cheap Montreal flights here, as I will get a small commission at no extra expense to you. Thanks, and happy travels!

We were guests of Tourisme Montréal, but all VIP tent-crashing and opinions are my own.

I love the street art - so many beautiful things to see. Completely gorgeous. That glass sculpture reminds me of the ones at the Atlantis in the Bahamas, which my daughter loves. And that gnocchi! Yum!

What an incredible experience! i LOVE that street maze!!

It's so brilliant! Another art installation next to another museum was a "forest" made out of bright blue "trees!"

Thanks for reading and commenting! The park was fabulous.

Wow, you guys really lived it up in Montreal! I've been there as well, but it seems like I missed out on a lot - I'll have to go back. I love the picture of you with the maple syrup and at the Chihuly sculpture :)

There are layers and layers of fun to be had in Montreal. Personally, I want to go back to get deeper into the yummy food scene!

Such beautiful photos Ms. Marshall. It looks like you had loads of fun. I definitely must visit Montreal.

It's only about 5 hours from Boston!