Parque Guell: At the Center of the “Too Much Tourism?” Debate 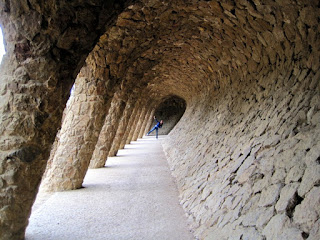 In Alice Walker’s beloved short story, “Everyday Use,” the conflict centers around which of two very different daughters should get to keep the mother’s ancestral quilt.

Should the precious quilt go to the daughter who plans to hang it in a case on a wall, never to be used, but only to be gazed at in historical appreciation?

Or should the quilt go to the more simple, less-educated daughter who longs to use the quilt every day until it is worn threadbare with love?

Which daughter do YOU think should get the quilt? What are the values inherent in each choice?

A similar debate is going on in heavily touristed places such as Parque Guell in Barcelona, Spain. 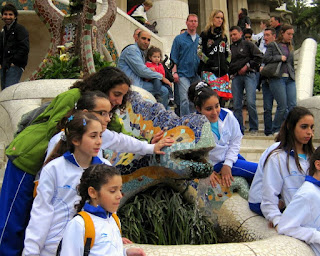 Parque Guell is the much-photographed, much-romped-over work of sculptural landscape art created by the great Gaudi, which is displayed in these here pictures. Isn’t it cool??

As my Barcelona host family and I walked through Gaudi’s breathtaking, smile-inducing curves of architectural whimsy, my host mother sighed: “I remember when I came here as a child and there was no one else around. It was so peaceful to wander around alone and sit in a secluded corner with a book! There are so many visitors now that it’s hard to move.”

We gazed at the throngs of tourists streaming through the paths like blood from a mortal wound. People were flowing up the stairs, through the tunnels, peering over the outlooks, and winding down the paths. Children were climbing over the famous rainbow lizard (pictured, upper left) as their parents snapped photo after photo and other parents elbowed their own children through. 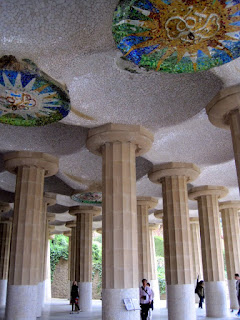 “Some crazy tourist took a hammer to the lizard recently and spoiled its hand!” explained my host mother, pointing sadly to the ragged chips on the green mosaic scales. I shook my head in distress.

Clots of tourists from Italy, Asia, Russia, America, and beyond gawked at the swirling designs on the ceiling of the column cave, pictured left.

A particularly large clump of humanity stood beneath the octopus mosaic which dangled from one curve. An octopus! So fabulous! That clever Gaudi. A Spanish guitar master plucked out his gorgeous tunes for Euro cents in the echo of the chamber, and other hawkers sold sunglasses and scarves from atop white sheets.

My host family and I pushed past the throngs and strolled into the maze of tunnels that looks like a wave of mud, pictured in this article’s first photo. It was so beautiful! “Gaudi meant to mimic nature in his work,” explained my host. Gorgeous. 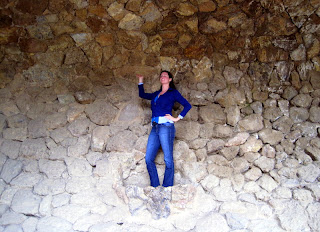 All along the walls, the architect had left empty rock platforms. I looked down the tunnel, seeing how other tourists were clambering up the platforms and posing for cameras, and suddenly I burst into joyous laughter: Gaudi didn’t put sculptures there because he wanted us, the park’s visitors, to be the works of art!

I promptly scampered onto a platform and took the photo to the right.

And just like that, all of a sudden, I was filled with an outpouring of love for both the designer of this magical park, and for all the thousands of tourists swirling around us: pushing, giggling, snapping photos, and generally having a FABULOUS time. It was not only all right that we were all there in our glorious multitude: it was positively good. 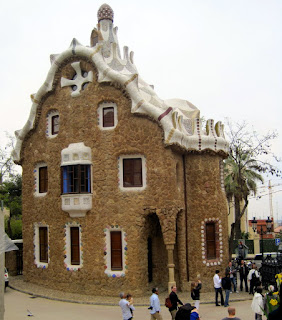 I suddenly had an aching flashback to the lighthouse national park at the southern tip of Ko Lanta, Thailand. When I visited in December of 2009, the stunning, expansive park was EMPTY. There was not a single tourist for miles and miles– and it was high season.

On one hand that was kind of cool, but on the other hand it was really sad! There was plenty of room in Southern Ko Lanta for a few hundred more tourists, easily, and in fact the livelihood of the local population was being severely threatened by the lack of visitors.

Indeed, in my opinion, the Parque Guell deserves to have tons of tourists. It can take it (as long as security keeps an eye on crazies with hammers) and I believe Gaudi would have wanted his giant work of art to be chock-full of gleeful folks. 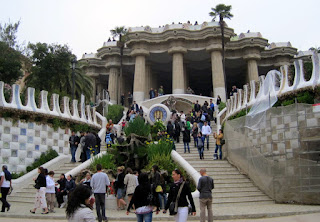 Right now, entrance to the park is completely free, and I do believe it would be worth it to charge at least a few Euros for entry (with free passes for local residents) to help with maintenance and security costs. People would pay it. Why? Because I entered the park feeling a bit glum and sleepy, but exited with a giant grin and fifty great photos. It is like Prozac in park form!

Back to Alice Walker’s short story, “Everyday Use.” Did you guess which daughter got the precious heirloom quilt in the end? That’s right: the daughter who would use it every day for warmth with love! It’s better, in the opinion of Alice Walker and myself, for something precious to get a little worn out in the name of being actually, passionately used and appreciated… instead of gathering dust behind lifeless glass.

I've been to Barcelona several times and have visited parc guell each time. Funny enough, it has NEVER been crowded! I must have just been lucky. My fortune aside, the place is heavily touristed. I dont think tourists should be banned but I do think that charging a few euros for entry (and yes, FREE for locals!) is not unreasonable. I'm not talking 20 euros, I'm talking 2 or 5. Something like that. Tourism is a great boon economically to many places but it brings along alot of challenges and outright problems.

I visited this park a few years ago and loved it. For me, green spaces are huge - especially in a big city like Barcelona. However, this was more than just some green space in a city. Gaudi's unique architectural style makes this place far more interesting than the usual city park. I understand why tourists come here. However, they should also respect this place as well.

The story behind this park is also interesting as it was supposed to be a upper class neighborhood for expensive homes. That didn't happen and it was turned into a park.

I can see how it would be a bummer to the locals, but having been there myself and LOVING Parc Guell, I can't imagine making it off-limits to tourists. It's more than just a park - it's a work of art that should be admired and shared. I also agree with you though that they should keep a closer eye out for crazies with hammers. ;)

The fifth picture reminds me of a gingerbread house. :) Also the corridor looks slanted(first picture). The creatures created by Gaudi look so amazing and real. Someone should bring some of his creatures that could be moved to the MFA for a tour.

I love Park Guell, but yes, it is always packed. Loved your first pic in the "wave." I took one standing on the wall pretending to surf...