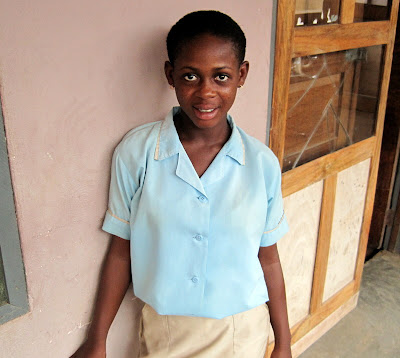 “Only students with perfect attendance can compete for a spot in the YCC trip to Cape Coast,” the Director told us.

I was thankful that I had attended school each day, so I was able to advance to the next round in the Cape Coast trip competition: writing an exam that covered both English and Mathematics.

We waited anxiously for the results, and at last they came. I had passed! I had earned a spot in the Cape Coast educational tour!

I ran home to tell my mother, who was stirring the banku for dinner. “Eja gba gba!” my mother cried out in Ewe, which means, “I am very proud of you!” It would be the first opportunity for any member of our family to visit the most famous tourist attractions in our country.

It was April, 2009 that we set off on the long bus journey West. Our group consisted of: five YCC students who, like me, had perfect attendance and had passed the test, three students from the community of Adrakpo and three from the small village of Dalive who had all also shown academic excellence, four American volunteers from Bright Star Vision USA, six YCC staff members, and two Adrakpo teachers. Though we came from many different worlds, everyone got along like friends. 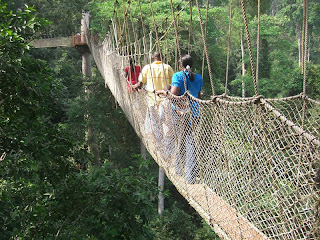 We all wore nice white T-Shirts which Bright Star Vision’s founder, Marla, had brought all the way from Connecticut. The journey started at eight in the morning, and by twelve noon, after a short stop in Accra, we arrived in Cape Coast.

For many students, that day was our first time ever on a bus. Usually we use a tro tro or stay in our villages, so everyone was staring at the scenes out the windows while the vehicle was moving. We were so excited!

Our first visit was to Kakum National Park. There, we walked on a path hanging high above the jungle canopy. I peered down through the leaves as our guide revealed to us, “The ground is two hundred and fifty metres below!”

The canopy walk swings back and forth as you walk along it, and we were afraid… but so amazed! We learned that as it grew dark, wild and terrifying animals would begin to emerge: lions, tigers, monkeys, and more. Our guide informed us that the Kakum National Park was built by Ghanaians as well as Canadians.

We then had our lunch, which was an American food called peanut butter and jelly sandwiches. “Oh– this is not sweet,” said Precious as the sticky peanut butter filled her mouth. We did not enjoy the food very much, because the food was not African food we are used to! 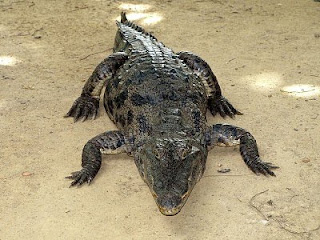 We then went to our second destination, which was Hans Botel, a crocodile pond. We saw more than forty crocodiles lurking in the water and we took many pictures with the dangerous animals.

“You can sit on the crocodile,” said the guide. We refused to do that foolish thing, but Sir Godfred actually agreed to hold the rough and heavy crocodile tail! “It was a lifetime experience,” chuckled Sir Godfred as he put the tail down and ran away. Everyone was laughing and screaming.

In the evening we slept in a beautiful hotel called The Prospect Lodge which was three stories high. From it, you could look out over all of Cape Coast, with its white buildings, hills, and ocean. We had our supper of banku in the hotel restaurant and then we took our baths.

To wash, there was a shower on the wall, instead of the buckets of water we usually use to wash ourselves. We spent many hours in the bathrooms because we had never experienced that before. We each shared a hotel room with our friends and teachers, and I slept extremely well because the bed was soft, and nobody disturbed me like they do at home. 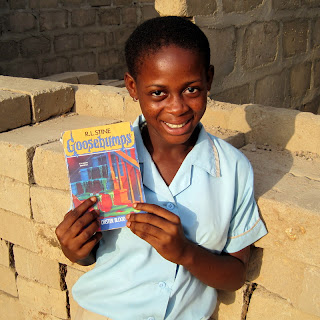 The next morning we took our bath again (it was so nice!) and had our breakfast of tea and bread. Then we took off by bus. Our next two trips were to the two most famous castles in Ghana, namely Cape Coast Castle and Elmina Castle.

We went to Cape Coast Castle first (pictured to the lower left). There we saw the high white walls, with the waves of the sea beyond, and we inhaled a smell of rotten fish.

At the castle, we learnt that all the countries in Africa had been colonized except for Liberia and Ethiopia. The reasons why the Europeans colonized Africa were to exploit the African resources and to preach the gospel. The colonial masters of Ghana were the British, but before this, other Europeans came.

In the late fifteenth century, the first Europeans, the Portuguese, arrived in Ghana, which was then called The Gold Coast. Their main reasons for coming were to discover the sea route to India and the Far East and to trade with the people of Africa. However, soon they became involved in the horrible slave trade. Cape Coast Castle was used to hold our captured forefathers in bondage before they were sent across the ocean to a lifetime of slavery.

Our group was taken into the deep, dark dungeons of Cape Coast and Elmina Castle by the guide, and I realized: “Our forefathers truly did suffer.” 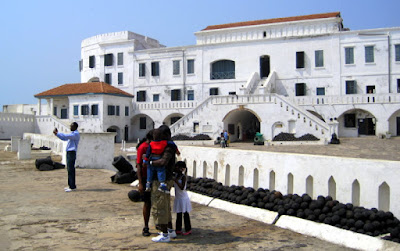 Before heading back to Accra and Sogakope from the castles, we stopped at Cape Coast University to have lunch. The university was a very large story building, and it was beautiful. Marla explained to us, “This is one of the great institutions of learning that you may attend if you work hard in school.”

At mid-afternoon, we left Cape Coast and boarded the bus to go back home. Over the two day trip, we had experienced and learned so much that we had never even imagined before. As the bus bumped down the road, everyone began singing with joy. When the sun set and the land outside the bus windows became dark, one by one we each fell asleep, satisfied.

I am very thankful to YCC and Bright Star Vision USA for arranging this educational tour. I had a wonderful time, and the trip proved that hard work in school brings great opportunities.

Lillie’s Note: Did you like Patience’s article? Please leave her an encouraging comment, question, constructive critique, or compliment! Don’t forget to specify your country of origin and current location. Many thanks!

It's pretty awesome how in America, we usually have field trips that people would think as boring. In America, people would rather stay home than go on an educational trip. Patience was very adamant about the trip. She would be willing to take a test, and was able to take the trip to Cape Coast. We take these trips as granted, but she took the trip seriously. She learned so much thing from that trip. It't pretty cool to know that there are still a lot of children in the world who would take education seriously.

I really liked this article because it is in a perspective of a student like us but from another country. This is really interesting because it also tells us that kids in the USA aren't that different from the kids in other countries like Ghana.

I have liked this article very much because this shows how children in Africa have the same dreams of wanting to go into college as much as children in the USA.

There is a world of learning and opportunity out there for you to see. Keep studying and you will also gain those opportunities! Great job on your story!

I love peanut butter and jelly sandwiches! I am an American girl, but I live in Germany now, and here the people also don't like peanut butter because they are not used to it. It does have a weird texture if it's not familiar to you as a child. But personally, those sandwiches are something I miss from home!

Congratulations on getting the chance to see Cape Coast, you really deserved it for all your persistence and dedication to school! Trust me, if you keep working hard you will have a chance to go to university! If you love learning it is the perfect place to be. I know because I am in college now and I learn something new every day.

Your story was excellent! Thanks for explaining some of the history you learned while on your trip. From all of the noises and emotions you described, I felt like I was there with you.

That was an excellent article. I am glad to see that your academic skills enabled you to take that amazing trip. It is encouraging to see that you got so much out of it. Keep writing and learning.

TheWordWire said... He invited you to sit on the crocodile? And somebody held its tail? Wow - what an adventure. Hope you have many more.

Thank you so much for sharing this story. I've heard my mom tell me about this amazing day before but it was very interesting to hear it from your unique perspective.

It all sounds so fun and exciting to me but my favorite part was the singing on the ride home!

Keep up the good work!

Ben said... Dear Patience, I just wanted to let you know that your stories and impressions of the world around you are a joy to read. I hope you continue to work hard in school. Your writing is certainly much better than mine was at age 13 -- sadly for me, it may also be much better than my writing is today at age 29! In any case, best of luck to you in the future. - Ben

(PS: You should give peanut butter another try! It's good with bananas.)

Kmo said... What a great article, Patience! It sounds like such a fun trip! I think my favorite part was the part about the crocodile! And Ben is right about the peanut butter sandwiches with bananas! Kristin Memphis, TN

Great story! It sounds like it must have been an amazing experience! I loved all the detail you put in it! :D I also agree that peanut butter and bananas is good! You should definitely try it sometime!

~Stephanie (from USA but in Spain right now)

Dave said... Patience, you are truly a brilliant writer! You clearly put a lot of time and effort into this article. I hope you keep on learning history - even if the stories aren't always happy, they're essential to understanding the world around you.

Thank you for passing me these good comments! I will try to eat bananas with peanut butter in the future!!! Dave, I will continue learning history and reading history books so we can be sharing different ideas.

Many thanks and greetings to your families and loved ones.