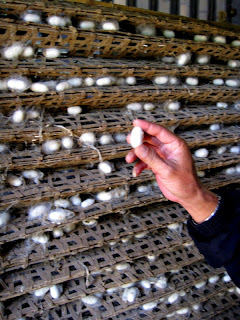 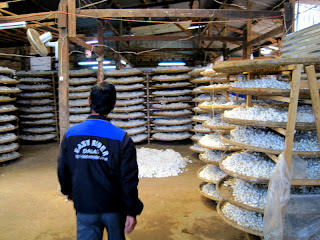 Worms, silk. Silk, worms. You don’t realize how weird a combination this is until you see the dirty, bug-filled process it takes to birth the regal material!

Dalat, Vietnam has a number of silk factories, and it is absolutely worth it to tour one. The moment Lulu and I walked through the dusty doors of the building, I started gasping.

Come along on the amazing tour of captions for each photo! 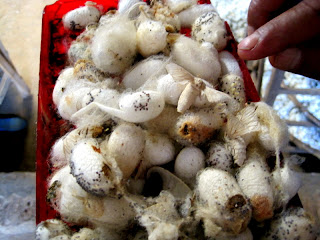 Top Left: A sort of bookshelf to make silk worms comfortable enough to create their cocoons. 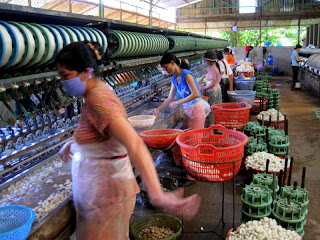 Second Down, Left: Cocoons where the male and female have emerged, mated, and laid eggs (little black dots) on the cocoons for new worms. Then the male dies (presumably happy). 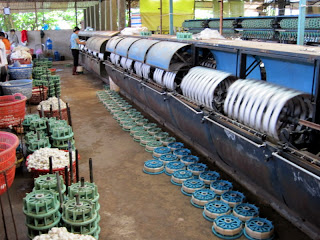 Second and Third Down, Right: Women boiling the cocoons in steaming hot water, then getting the end of the cocoon into a slurping-out-then-winding-around machine 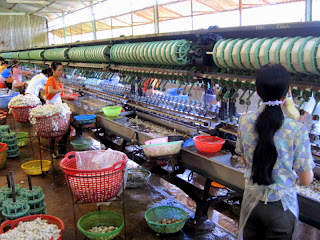 to unravel then spool the silk from the worm home! Lulu asked, “Why do you think it’s only women here?” I correctly guessed: “Small hands!” 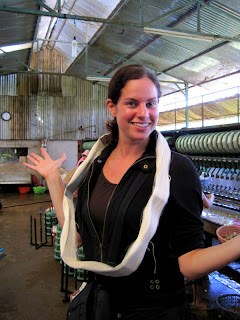 Third Down, Left: Machines that spin the new silk spools round and round to dry them.

Fourth Down, Left: My glamorous self forcibly modeling a silk spool around my neck… Lulu threw it on me and grabbed my camera! 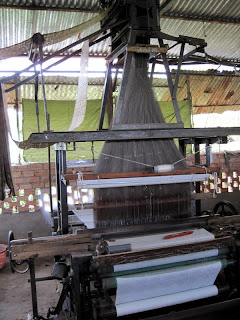 Fourth Down, Right: An old-fashioned machine that uses a player-piano-style pattern programmer to weave the silk spool into a flowered cloth! Really incredible. 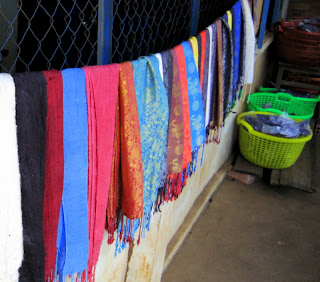 Fifth Down, Right and Left: Silk drying outside (in front of a junk heap and a motorcycle!) that has just been dyed vibrant colors.

Sixth Down, Left: Bolts of finished yards of colored silk!

Sixth Down, Right: Stunning clothing fashioned (usually in Hoi An, Vietnam) out of the silk made in the factory 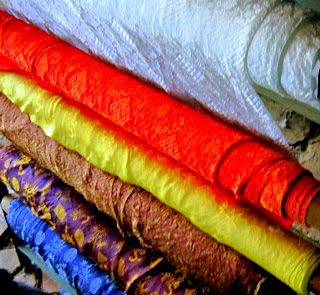 What really took my breath away 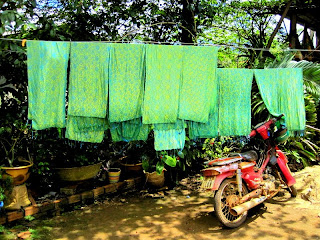 was the juxtaposition between the royal refinement of the silk and the down-and-dirty mechanics of how it’s born. I mean, you can’t get much grubbier than the following list: larvae, mating bugs, people toiling for hours over scalding water and wet insect homes, rickety old machines clacking in the dust, 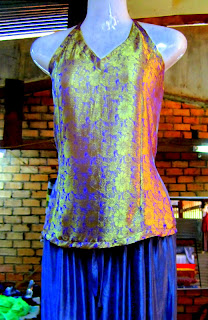 clotheslines in front of flea-bitten dogs and refuse, and all of this in a decidedly rustic setting. I had no idea it was like this!

This, however, illustrates why it’s so irritating when men idealize a gorgeous woman and put her on a holy pedestal without really getting to know her. (“Huh?” you say, “Where did that come from?” Hold on and hear me out, people.) Just like the silk, even the most precious-looking glamor usually has a story behind it with some dirt.

Rather than diminishing the beauty, learning its dusty past actually adds to its value!

We visited a silk factory in Hoi An, Vietnam. We also were able to see the women who do beautiful silk embroidery working. Quite amazing.

It really is. Glad you were able to see it!

That's a lot of work. I don't wear much silk, but it's really soft.

I wear silk a lot but, I never thought it as made by a worm!

If it is real silk, it IS made by a worm, and takes all this effort to put together!

I read a book about a silk factory in China (fiction) - really enjoyed it but never really looked up to see what it'd be like inside. Also, I now regret not going to Dalat when I was in Vietnam...

OH MY GOSH!!!!! That is so cool. I love the pictures! That must of been really fun to tour the factory. Another to add to my bucket list.