Um, So I Think I Just Saw the Holy Grail? 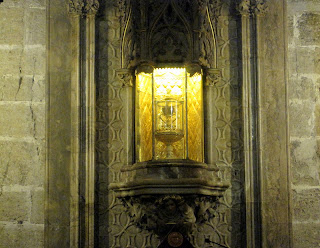 “Hey dude,” slurred my British dorm-mate as he climbed into his hostel bunk for the night, “Did you see the Holy Grail yet?”

“Wait, WHAT!” I exclaimed, “the Holy Grail is in Valencia, Spain? The magical cup used by Jesus at the Last Supper?!”

“That’s what they say,” the boy mumbled as his eyelids began to droop. “It’s in the little room to the right in the Valencia Cathedral. Don’t forget to see it before you leave. It’s pretty cool.”

Ok then! The next day, I shuffled the five minutes from our hostel to the mighty Valencia Cathedral, strolling past the peaceful cafes lining the Plaza de la Virgen and the Plaza de la Reina.

I paid the 4.50 Euro ($7) entrance fee to the two very stern women at the door, then promptly began gaping at the majestic blue dome and gold-framed paintings on the far wall which are pictured in the second photo of this article. 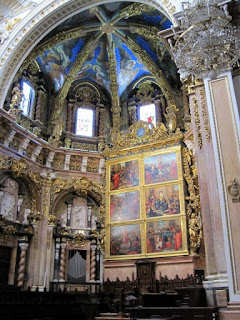 “Eyes on the prize,” I admonished myself, snapping out of my awestruck stupor. “First priority is to see the Grail!”

There were no signs whatsoever. There were no advertisements and there was no fanfare. I double-checked the map the boy had given me, then turned a sharp right to enter a high-ceilinged stone room with an ornate arch pictured in the third photo.

A golden glow exuded from the curved space in the center of the wall, and I moved closer, breathing a little fast. A Spanish woman was kneeling on the floor, swaying and crossing herself. I peered forward: There was, indeed, a magical-looking chalice sitting behind thick glass between two strong columns. The photo is the first in this article.

Could this really be it?!

Confused, I lingered for a half hour longer, then wandered back to the hostel to begin some research. Indeed, it appears from a number of sources that there are several possible Holy Grails in this world, but scientific research and a Pope’s blessing have in fact confirmed that this particular Grail in Valencia is one contender for the real one!

For a particularly spirited argument as to why this Valencia Grail is the real deal, check out this excerpt from an article on ValenciaValencia.com: 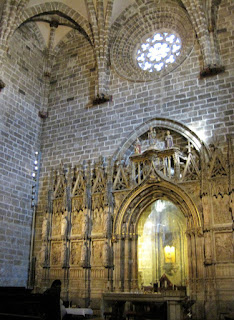 “Your quest for the Holy Grail is complete once you land in Valencia.

It is inevitable that such a seemingly bold claim will evoke a cynical grin from most people. However, and contrary to how it may seem, such skepticism is an uninformed reaction, rather than otherwise.

It is common knowledge that if you collect all the nails with which Jesus was crucified, it turned out that the poor guy had a few hundred nails in Him. And you could build a house from all the wood that is claimed to be part of His cross.

However, it is not just like that with the Cup that can be much more scientifically analyzed and cross-examined with various historical records and references. As a result, every single claim in the world has been dispelled. […] Historians all point their evidence to this item as being the authentic Cup used in the Last Supper. 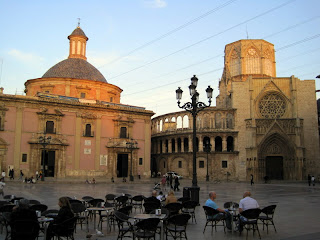 […] To be totally fair, the Cup in the Antioch Cathedral also passes tests on authenticity. However, it is way too large to be passed around as a cup.

Records refer to two cups being used at the Last Supper– one as a communal tank for wine and the other as a cup to drink from. The Holy Grail can be easily viewed in the Valencia Cathedral.”

And that, my friends, is why I think I maybe, perhaps, might have seen the Holy Grail. Hooray!

Reason Two (of Many!) to Visit and Love Valencia, Spain
← Read Last Post

Wends of Journeys and Travels

I wished I can come here and see this. As I flip history pages years ago on this, yes, there were so many claims on the presence of the Holy Grail but this one could have been or not, its an awesome experience for you Lillie.

Do you think anyone told Dan Brown yet?

Seriously, are you serious? And if so - it's hard to tell through all that glass, but isn't it a tad ornate? Jesus was a poor carpenter wasn't he? Surely if he'd owned anything of value he would have sold it to help the poor?

I would love to see the Holy Grail! It's not just beautiful, but historical. I would be lucky to even glimpse it.

Wow that is so crazy! I cannot believe that they actually located the Holy Grail! This article makes me want to travel around the world.

Elisa said... Great blog! I came across it by chance and this post really caught my eye. I was in Spain exactly a year ago and your stories about your adventures in Valencia and Granada bring back many fun memories