What did I do today?

In a quest for exercise plus tourism, I covertly tagged along behind various packs of Buddhist monks!

We meandered all day through Vientiane, Laos, drinking in the colors, faces, structures, and warm air.

Let’s see where the monks led. 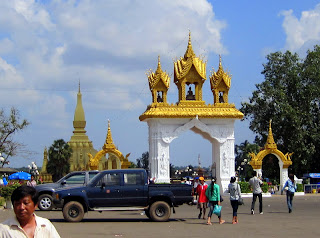 The first involuntary monk guide pack led me down a highway, past fragrant roasting chicken stalls, through a dusty construction field, then straight into a bustling Lao handicraft festival in front of Vientiane’s famous That Luang holy golden monument! The juxtaposition between the glistening temple and the oh-so-human market was delicious. 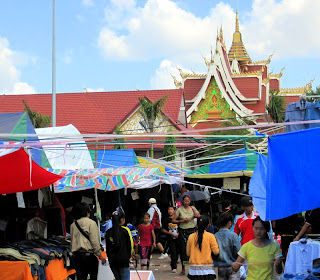 I love-to-the-love-love cheap clothes, so I spent a hilarious two hours in the broiling sun (those sheet canopies don’t give much shade!) asking each kiosk clerk: “Do you have EXTRA LARGE size?” and having them give me thimble-sized dresses then giggle at my expression.

Ahh– being a six-foot-tall woman in petite countries is ripe with humor. 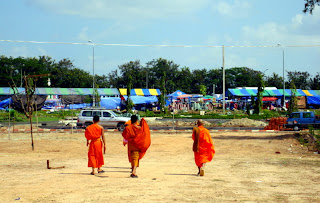 At last I bought a cute little black and maroon woven tank top that I bargained from $15 to $5. It is still rather too small, but it’s a cool design!

Down another highway we went (and by highway, I mean quiet street with a few cars, some bikes, a few tuk tuks, and a motorcycle or three), and then– what the heck is that lovely structure? I went closer to investigate.

I absolutely kid you not– this is what the informational plaque reads at the bottom of the Patauxay monument: 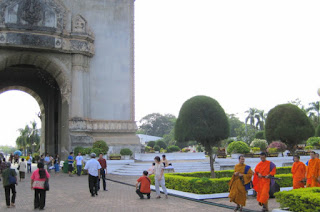 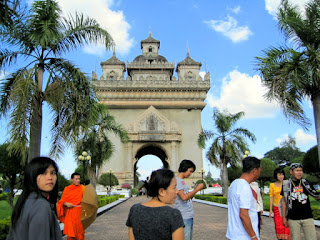 “At the northeastern end of the LaneXang Ave. arises a huge structure resembling the Arc de Triomphe. It is the Patuxay or Victory Gate of Vientiane.

“Built in 1962 (B.E. 2505), but never complete due to the country’s turbulent history. From a closer distance, it appears even less impressive, like a monster of concrete. Nowadays this place is used as leisure ground for the people of Vientiane.”

I collapsed in a fit of hysterics upon reading this. Humility incarnate. It is even funnier when you read that the cement used to craft it was taken from a donation from the U.S. earmarked to build an airport! Apparently some expats now refer to this structure as “the vertical runway” in honor of this misappropriation. 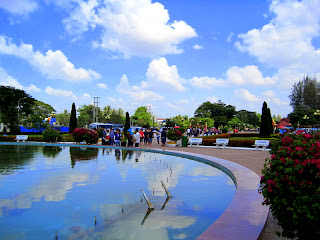 Regardless, the monument and the large park around it were packed with joyful Lao folk, chilling out, slurping snacks, and snapping photos of each other. 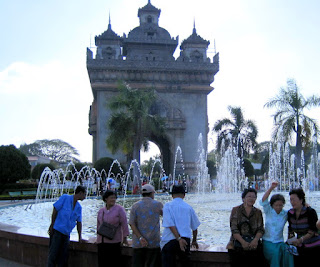 Down a street with tons of Lao National buildings we went.

Being from a country with grandly massive National stuff, I oohed and ahhed at the sweet small size of Laos’s National Library, National Stadium, National Swimming Pool, and… (pictured, right) National President’s House. 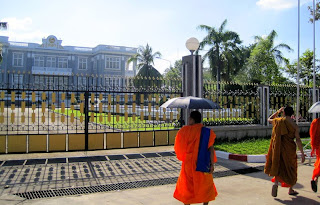 Ahh, Wat Si Saket! I had meant to hit this famous temple yesterday, but the next monk pack led me the kilometer right to it without trying! 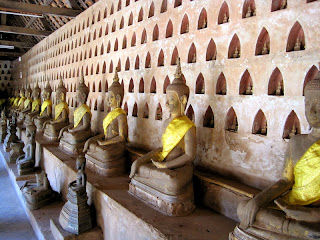 This temple is famous, for one, because it was one of the few to survive the Siamese invasion hundreds of years ago, and, two, because it contains over 2,000 silver and ceramic buddha images nestled in over 2,000 nooks in the walls!

And the incense smells good. 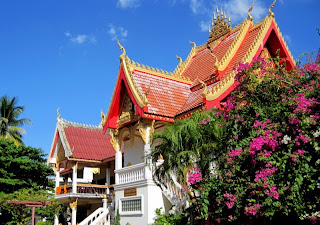 The gold and red monastery next door was particularly beautiful against the blue, blue sky, and the flame orange monk cloaks drying on the balconies made me grin. 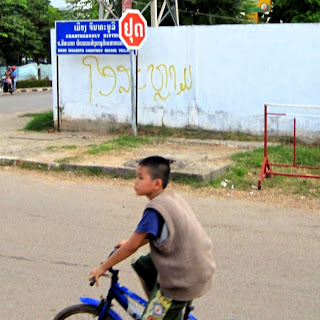 On the way home (monk-free this time, alas), I blew kisses at the curly stop sign in Lao, and to the dirtiest white kitten I have ever seen. 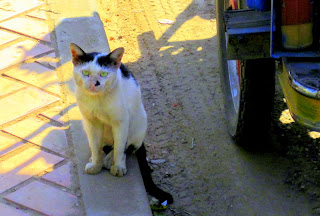 I’m not going to lie: my tummy is a little confused from the ridiculous amount of food I ate yesterday, but I figure a nice early bedtime tonight will get me ready for the bus north tomorrow!