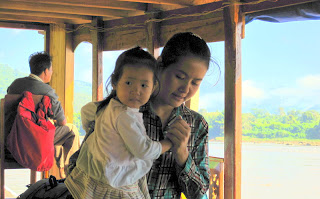 It was hour nine of day two on the Mekong river boat. I was deep into a crossword puzzle, lying half off my seat, feet high on the bench in front. Suddenly I heard a gasp.

“Psst, Lil!” hissed the eccentric Australian computer programmer, her hand on her heart, “That Korean guy has been secretly taking photos of your legs!”

I glanced back and the man hurriedly hid his camera and pretended to be examining the river. 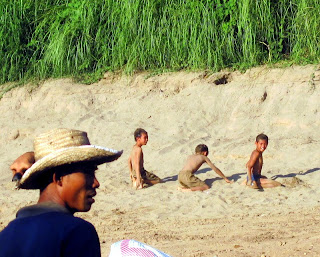 “Why that little– !” I growled, whipping my gangly legs around to stride over and ream him out. All at once, I paused. Hmm. I picked up my own camera and began flipping through the day’s photos.

Sure enough, I realized, in my own way, I was as guilty as him.

Exhibit A: In the misty early morning light that very morning, I snapped a picture of a Lao woman and her infant as they walked up the ship. The mother clasped the little baby’s hand. They looked beautiful. 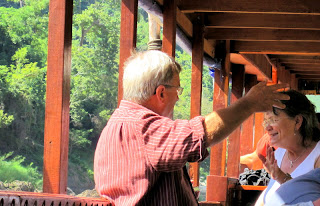 Exhibit B: After sitting icily on opposite ends of the boat for a full day, a German couple had a complete screaming meltdown, replete with wild gestures and near-tears for a full hour. I pretended to be photographing the thick jungle outside, but really captured the fight. Luke, Rebecca, and I spent hours trying to guess what it was about.

Exhibit C: I thought to myself, “Man, I love how Lao men are so affectionate with each other and with their children. I wonder if I could get a photo to illustrate a possible article about this? Aha! Look how cute those two male friends are.” Covertly: CLICK! 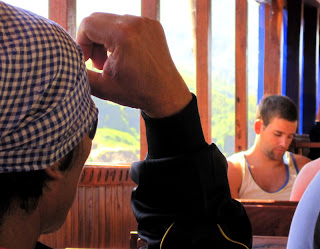 Exhibit D: “Hmm, I’d really like to show what the boat looks like, but I don’t want to creep people out,” I murmured. Ahaha! I stuck my camera over my shoulder, and a few button pushes later, I had the scene: funny hood, sullen expression, baby girl and all.

Exhibit E: There was a flock of male model-like British boys at the front of the boat playing cards. As I peeked over, a Lao man peeked over, too. Double voyeurism. Click, click!

Exhibit F: The boat glided up to a beach where four little boys were cavorting in the sand. We all snapped photos, and a Lao man with a big hat stood by as his wife unloaded rice from our boat. The setting sun made everything golden. 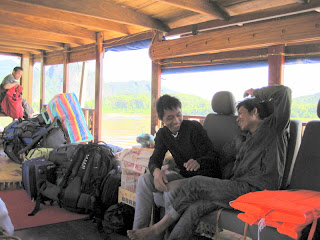 With this little revelation under my belt, I wandered to the back window of the boat opposite the Korean photographer. “Click!” I heard behind me, and raised my own camera just high enough over my shoulder to capture the orange-shirted Peeping Tom reload his film. Sneaky, sneaky, both of us!

When you live in a place for a while, photos are easy. Wrap your arms around your friends (preferably in sexy going-out clothes), grin, and poof! your photo makes everyone happy. 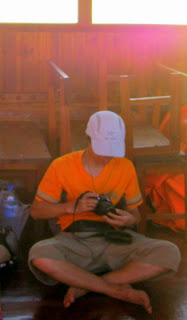 If you’re a drive-by tourist, however, the ethical dilemmas pile up. Can you REALLY justify snapping your camera in the face of a wrinkled old lady selling marigolds, or a stately monk, or a gorgeous little child? These photos always look stunning and satiate onlookers’ hunger for “Exotic Travel Photography”, but I can rarely stomach such a blatant intrusion.

In certain areas, such behavior can even get you detained or physically threatened. One backpacker recently got held by a Thai hilltribe because, in their religion, being photographed forces them to sacrifice a whole cow to offset the bad luck incurred. The tribe demanded that the tourist pay thousands of dollars to compensate for the cow’s loss.

But without blatant photography, you become reduced to having no human photos at all, unless you opt for the sneak-snap option: camera over your shoulder, or shielded behind a shirt, or poked out of a window. Yep– I’ve been doing a few of those. I feel like a little weasel doing them, but a hundred photos without a single local face is just wrong, too. 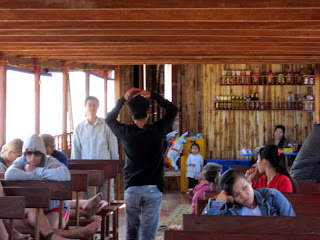 So today I took the ferry from the Lao side of the Mekong River to the Thai side. Two Thai men climbed into the tiny boat and started chatting me up as the motor puttered to life. “Where you from?” the one who spoke English asked, and I politely answered that and a few other easy questions, referring as I usually do, being a woman traveler, to the invisible (large and powerful) “friend” I’m off to meet.

Suddenly something silver glittered in the sun and the sweaty black-shirted man was right next to me. “Huh?” I stuttered.

“SMILE!” said the first man from behind his silver camera. I laughed in understanding as the shutter snapped. 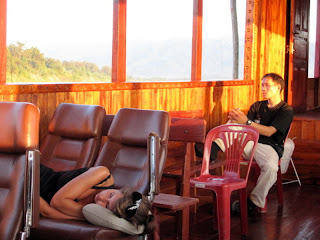 The two men switched places and took four more photos of my large and pasty White American self. At the border I bid the two men farewell and politely declined their offer of a ride to Chiang Rai and a double date with my “friend”.

Me oh my– what will become of those random ferry photos, who knows. But for now, let’s embrace the good of humanity, and acknowledge the delight we feel in seeing the different shades, shapes, and sizes of the human form!

It was cool to hear your adventures on the Mekong River in Laos! It was a bit weird that a Korean man was taking pictures of your legs on the boat though. It was nice how you got some nice pictures of some of the daily lives of the people who live in that country! Sounds like you had a blast!

The first picture shows so much love between the mother and daughter!

Creepy, but your reasons for taking photos of others are more appropriate than that Korean dude.

I really struggle with this. I love capturing people, but I don't want to intrude. I usually do it from a distance with my zoom lens, but even then it is intrusive. If they are up close, I always ask permission, but that doesn't happen that often as it is usually the spontaneity of the moment I am going for. My biggest struggle is taking pictures of adorable children. Would I want someone taking pictures of my (hypothetical, at this point) children? Probably not, but I can't resist! From a photographic standpoint, I find my people pictures are sometimes not the greatest, because I take them in a hurry and all nervously. Not sure what the best approach is to this issue. I guess maybe accepting that sometimes strange people will have pictures of you somewhere in the world?

Different cultures have different apporoaches when it comes to snapping pictures. When I was in Samoa last year, anytime myself or my travel partner pulled out a camera, the schoolkids and locals were automatically posed, ready for us to go CLICK!

Sometimes you never know from place to place. Most of the time, it never hurts to ask.

Hey, at least the guy who groped you in Vietnam didn't take pictures.