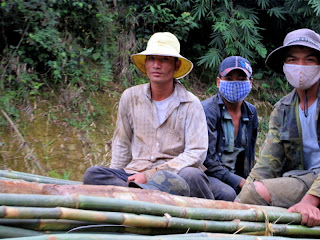 Well. I hope you all have been reading parts one through seven of this Central Highlands motorcycle saga, because that context is important to understand the full dimensions of what happened next. 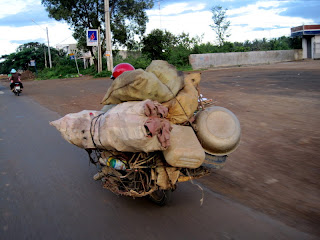 It was the evening of day three of Lulu and my four days on a motorcycle across Vietnam. I had just cried from exhaustion after traipsing through four jungle waterfalls by the border with Cambodia, and Lulu was driving the motorcycle through the dust-thick dirty highway to Buon Ma Thuot (called B.M.T. for short), the capital city of the Central Highlands. 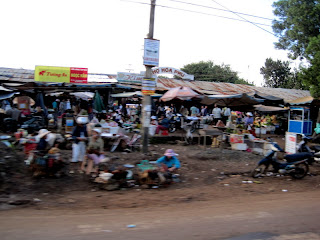 “Real Vietnam!” Lulu hollered, handing me my camera, and I snapped a photo of one of the many FULL-BEYOND-BELIEF motorcycle riders in the road. I think the one pictured here, top right, had about thirty different packages strapped behind her as she zoomed along. How many can you count? What the heck is in them all? How any of these drivers survive is beyond me.

We put the camera away and I settled in to watch the road as we bumped along.

Suddenly… I felt Lulu’s hand on my back. 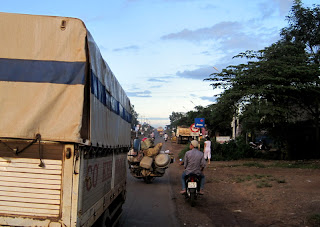 “Hm,” I thought… “That’s a bit strange and rather dangerous. But maybe he’s trying to give me a nice little massage since we’ve been driving for three days and my back IS getting a little sore. Hmm.” 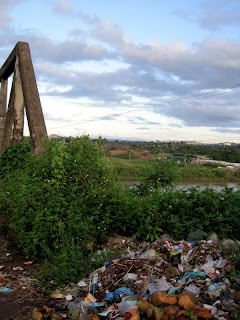 Suddenly, Lulu’s hand dipped lower and slid down to fully grasp my rear. I was in total and utter shock. Was I REALLY being groped on a moving motorcycle by a middle-aged Vietnamese man who I’d hired because he had proven himself a wonderful guide? What the heck was the best course of action to fight a highway fondling? UGH!

My arms were clasped around Lulu’s chest, as most riders do on the back of a motorcycle, and as Lulu tried to slide his hand further around, I lifted my elbow to begin to pry his arm upwards and away from me. His groping hand froze as he realized he had been caught. And yet he left it there on my butt. I made a face of utter disgust and began again to lever up his arm with my elbow without causing us to crash on the highway. 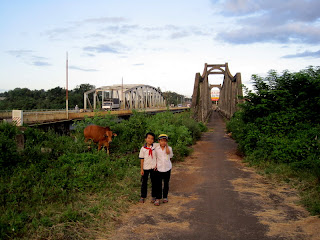 We came to a bridge and Lulu let me out to walk my usual kilometer, then sped off, hollering that he’d meet me on the other side of the bridge. I stomped along the dirt and concrete absolutely exploding with fury. What an unbelievable abuse of power and what an awful lapse of judgment on his part! Oh, he was not going to get away with this.

As I waved to the sweet schoolboys crossing the bridge in the other direction, I realized I was truly in the middle of nowhere, and had to act very wisely if I was to get out of this predicament, AND get justice. We were just an hour away from B.M.T., where I knew there would be buses to civilization, and so I decided to play it as cool as possible until then. 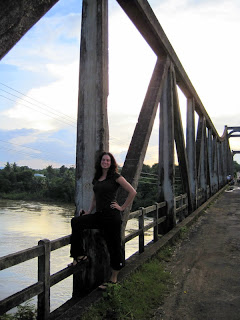 We revved up back down the highway and Lulu tried another grope. I pried with my elbow and hatched my plan.

Our motorcycle pulled up at a small highway cafe for fresh Vietnamese coffee and condensed milk. “I see you tired,” said Lulu, sympathetically. “You need coffee.” I forced a smile and collapsed onto the cafe’s hammock, avoiding the two cats chasing each other along the dirt floor.

It was silent for a while, and I began to have conflicting thoughts. Maybe that pawing on the road really was just a kind back massage. Lulu had been such a helpful and kind guide. Would he really be so creepy as to be willfully groping? I understand how to deal with blatant Latin American machismo and come-ons from my travels down south, but this was a strange new situation. Maybe it was all in my head. 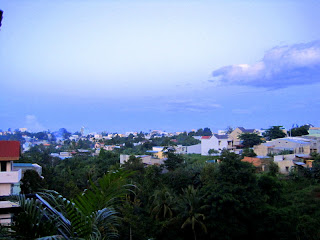 Then Lulu pulled up a chair and spoke low. “Usually when I touch the girls, they laugh. They think it fun. If you don’t like, I stop, just don’t tell.” I sat bolt upright in the hammock. Oh that little rat. He knew EXACTLY what he was doing, and he was using Molester 101 lines on me! I said nothing, but finished my coffee and got back on the motorcycle. Eleven more kilometers to B.M.T.

At last we arrived in the Eden Hotel in the capital of Vietnam’s Central Highlands: good old Buon Ma Thuot (pictured, right). B.M.T. grows and trades some of the best coffee in the world, and has seen incredible positive growth from the resulting money. The town is also known for being the first city “liberated” by the North Vietnamese Communists at the end of the Vietnam War in 1975. I grabbed my valuables, threw them into a private locking room in the hotel, showered and changed, then strode downstairs to liberate my own self. 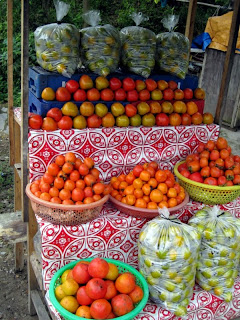 “Sit down here, please,” I said to Lulu, pointing to a table in the middle of the crowded hotel lobby. He sat, confused. I pulled out a piece of paper.

“Before we left, we wrote a contract for the itinerary and the money for these four days,” I said, picking up a pen. “We are now going to change that contract. Tomorrow, instead of riding on your motorcycle to Nha Trang, I will get onto a public bus and take the seven hour journey alone. We will also change the amount of money I pay you to half.”

Lulu blanched and choked out, “No! We go to Nha Trang together! I want take you to Nha Trang! Why you change contract? Why?” 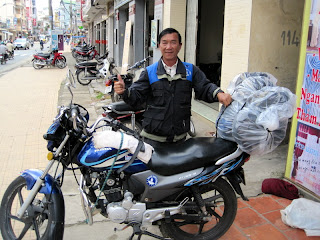 I looked him straight in the eye and said very loudly: “BECAUSE,” glaring, “YOU TOUCHED” I held up my open palm, “MY ASS.” I slapped my hand onto my butt. The clerks at the Eden hotel looked up in shock, and I continued. “You do NOT touch someone without their permission. You do NOT. You disrespected me and it is NOT all right.”

Lulu let out a yelp like a dog that had been hit by a motorcycle and threw himself forward over the desk. “OKAY, OKAY!” he hissed, “Yes, yes, change contract! But not so loud, not so loud! They look at me!” Thank you, Vietnamese Shame Culture, for getting my back.

With a sigh of relief I turned back towards the contract. I lowered the price three times, and each time Lulu nodded rabidly and hissed, “Yes, yes, just not so loud!” By nine pm we awkwardly shook hands and Lulu said he’d help me to the bus station at eight thirty in the morning. 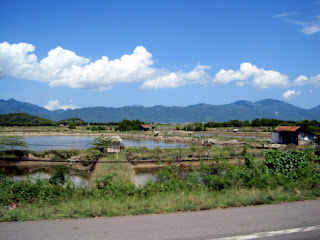 At one am I awoke with a start and remembered: In Vietnam, buses leave in the early, early morning, not the afternoon. I padded downstairs and woke the poor, sleeping hotel clerk and had her check the bus times. Sure enough, the bus I wanted to take to Nha Trang was scheduled to leave at eight FIFTEEN in the morning. I shook my head in disgust and re-set my alarm.

At seven am, I went downstairs with my bags, planning to take another form of transport to the bus station, but Lulu was there with the motorcycle ready. He handed me a foul-smelling curl of gray and said, “Dry squid. You eat.” I declined. (A friend later joked, “Squid jerky is my go-to food to apologize for groping.)

I figured I would give this trust thing one more shot, and so we chugged down the brown highway and soon pulled in at the station. Lulu hopped off and ran inside. A moment later he ran back out. “Bus you want is full,” he said. “Yeah right,” I replied, striding in and buying a ticket for $2.50 four feet from us.” “No, no! He hollered, “That bus take eleven hours! Bad bus!” 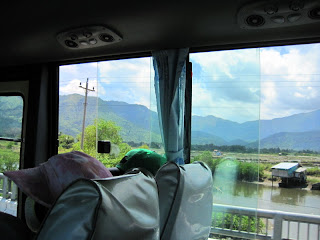 At this point the rusted old minibus to Nha Trang pulled out of the station towards the road and I grabbed my bag off the motorcycle. “It’s all good, as long as I’m not on a motorcycle with you,” I said, bounding up the dirty minibus stairs. As we pulled away I could see Lulu awkwardly standing in front of his shiny motorcycle, staring in shock out at space. I leaned out the window and shot him a searing glare. He hung his head.

The minibus was packed with Vietnamese country folk, six massive sacks of rice, a busted motorbike, and two babies (pictured, left). All the people smiled at me warmly, and when we stopped at a mountainside gas station, they offered me tea and lotus fruit, showing me how to eat it when I got confused. They were truly kind. 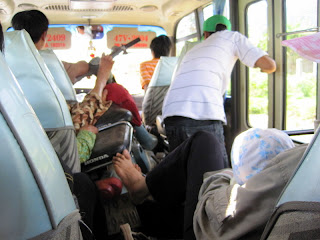 Five hours later (not eleven, Lulu!), we pulled into Nha Trang and I moved into a penthouse room with a sea-view balcony for ten dollars a night. I thanked my lucky stars that I have the privilidge and ability to get out of that situation.

Though my trusty computer was broken from the motorcycle journey, I, myself, am not.

Several people have said that I should report Lulu, which is one reason (besides personal therapy) that I am writing this story in such detail. I have very mixed feelings about this, because in Vietnam the penalties would be extremely, extremely harsh. Moreover, the ninety-nine percent of our journey that did not involve groping was truly fantastic, and I appreciate the insight into Vietnam that my guide helped me absorb. 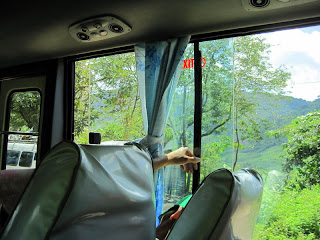 For now I will content myself with the knowledge that the women in the Eden Hotel may have reported the scene I made screaming at him and miming the grope, and, more likely, tourists who Google “Easy Riders” will find this article and Lulu’s picture. 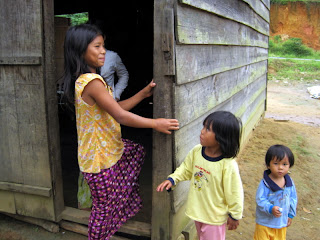 Overall, however, this experience has given me massive new compassion towards all those people who have been, or are being, physically assaulted. What happened to me is extremely small compared to the horrific stories I’ve heard as a high school teacher. Abuses of power make the victim feel terrified, helpless, and nauseous with confusion, and I am now sending a huge wave of love to those organizations and individuals who are fighting each day to keep a person’s own body sacred.