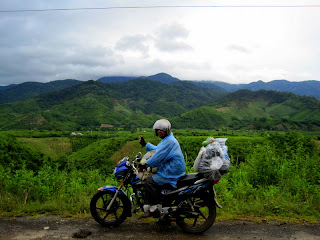 For the second half of the second day on the road, Lulu and I wove slowly up, up, up and through the lush green mountains of Vietnam’s Central Highlands. 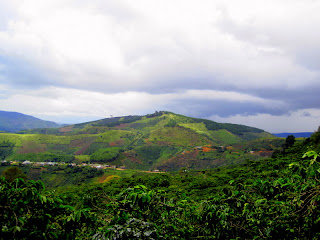 I was on the back of Lulu’s machine, letting the expert of nine years (and over 150 such journeys) do the put-putting for both of us. Meanwhile, I tried to keep my mouth from being too widely agape at the beauty on all sides. 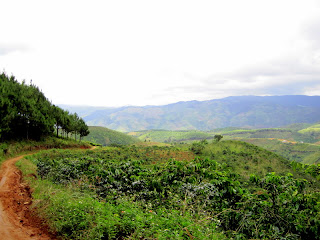 We pulled to the shoulder of the road. “This the Homeless Hamlet,” explained Lulu, pointing to the village far below. “You take picture now.” I did. “In Saigon was too many homeless people, so government take some thousand and drive them all the way out here to give them land and new life.” 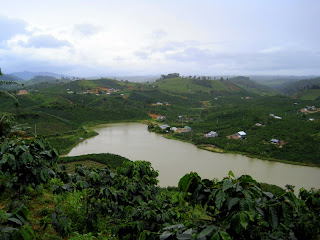 “Oh!” I exclaimed, peering further down into the tranquil green (pictured, right). “Are they happy?” 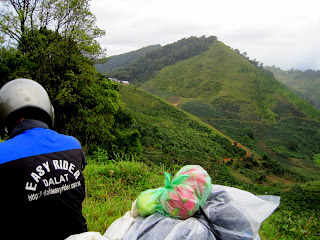 “I know some them,” Lulu said. “At first they very bored. In Saigon, much noise, much light. But then they realize, it much, much better have nice land, lake, farm, than to sleep every night in gutter!” I nodded.

“You take picture yet?” Lulu asked. I assured him I had. “Take another.” 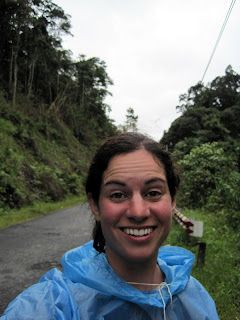 Sometimes it would sprinkle rain, and we pulled ponchos out to cover us and our belongings. In the rain, with the bright white sky of luminous clouds, the jungle was a pulsating green.

Often, Lulu would guide me to walk, telling me he’d meet me a kilometer down, 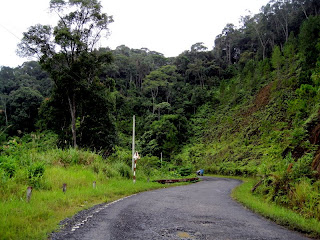 then chugging off to leave me in absolute bliss with the monkey sounds of the (as he called it) “Real Vietnamese Jungle!” The roads were serene, only a few motorbikes purring through, many pausing to wave and smile. 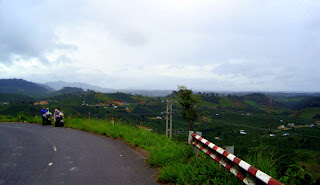 Whenever I finished the kilometer and found Lulu, he’d be smoking his ever-present cigarette, staring out at the vast pastoral landscape with love. “Beautiful!” I would always declare. He’d always chortle and say, “Yes, beautiful.” 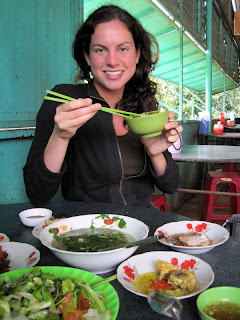 (If you look closely in the photo to the upper left, you can see Lulu’s TINY blue form against the looming jungle behind. What a scale!) 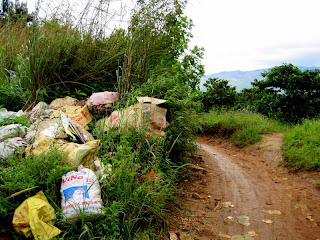 Sometimes we would pass big heaps of trash, cradled like the evil child in Mother Nature’s disappointed arms. A mini-bus coughed by and the driver threw another wrapper into the pile through his open window.

To select a lunch spot, Lulu hunted for the greatest concentration of trucks in front of a stall. “Truck drivers, they know cheap and delicious,” he explained.

Indeed, the plates and plates of scrumptious small dishes we inhaled cost $1.50 in total and were amazing. 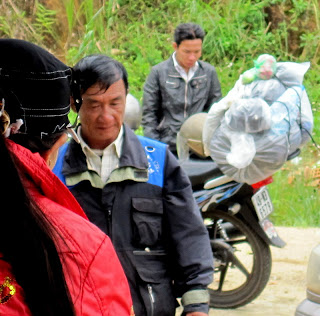 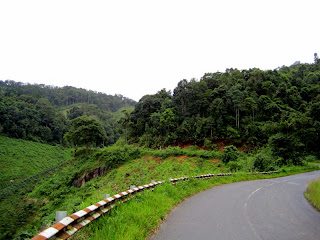 Partway through lunch, I realized with horror that a random man was squatting by our motorcycle, touching its every inside groove. “Lulu!” I hissed, “He’s trying to rob us! Go get him away!” Lulu laughed and said, “He just never seen new motorcycle before. They only have old motorcycle here in countryside.” 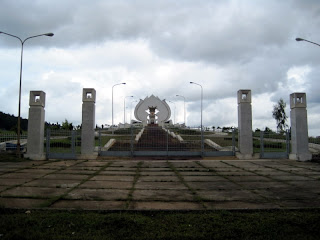 I made Lulu talk to the man anyway, and sure enough, the young fellow clutched his face, shook his head with awe, and gushed about the shiny metal beast. Even as Lulu walked away (pictured, left), the man was still staring at the motorcycle like a teenage boy at Beyonce.

We drove through a dusty gray town that had been a major battle site between Communists and the U.S. forces, and saw a ghostly monument to commemorate the lives lost (pictured, left). 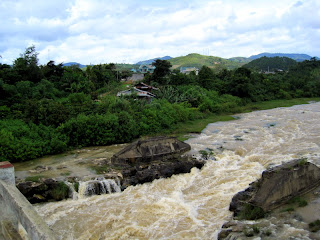 As we passed over a bridge, Lulu explained, “This bridge new. Bridge down there,” he pointed to pieces of rubble sticking up from the seething brown water (pictured, right), “bombed during war.”

Back in the stunning green hills, I wondered, as I would many times on this trip, how a land so beautiful could have been at the center of such a hideous war.

I can’t visualize bombs and chemicals ravaging these greens and blues and golds, or these smiling faces… but, as we all know, they did.

I'm a bit sad to leave these highlands today (Da Lat). I had a nice experience in nature as well. And I too couldn't fathom this place was the site of fierce battles a generation ago. Some parts, I learned, were completely barren and now are lush with greenery. A nice metaphor..

Wow, what an awesome day trip. It's funny how Lulu knew that man staring at and touching the bike was not a threat, and a buck fifty for all that delicious food, yum! I often use that "trick" as well when I'm hungry and looking for food while on the road, how full is the parking lot, or how much of a line up is there at the food stall.