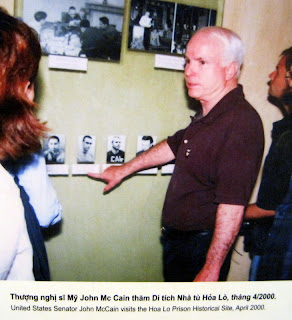 Across from the glass case holding the uniform John McCain was wearing when he was shot down (pictured, right), Hoa Lo Prison in Hanoi has a sign that reads as follows: 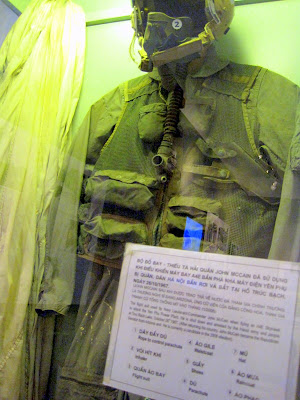 “United States government carried out a sabotage warfare by air force and naval force against the North of Vietnam from 05 August 1964 to 15 January 1973. Thousands of planes were shot down, and hundreds of U.S. pilots were arrested by the North army and people. Some of them were imprisoned here.”

“During the war, the national economy was difficult but Vietnamese government had created the best living conditions to U.S. pilots, for they had a stable life during the temporary detention period.“ 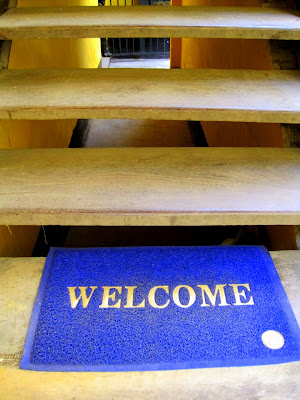 Ahh, propaganda and euphemisms– how we love you!

(…almost as much as the cheery “Welcome” mat on the prison floor, pictured, right.)

Wikipedia tells the other side:

After McCain’s warplane was shot down over North Vietnam in 1967, “some North Vietnamese pulled him ashore, then others crushed his shoulder with a rifle butt and bayoneted him. McCain was then transported to Hanoi’s main Hoa Lo Prison, nicknamed the “Hanoi Hilton”. Although McCain was badly wounded, his captors refused to treat his injuries, beating and interrogating him to get information; he was given medical care only when the North Vietnamese discovered that his father was a top admiral.” 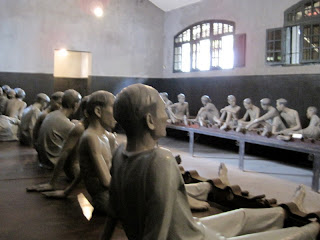 Regardless, despite its souvenir shop and jaunty yellow color, what remains of Hoa Lo Prison is creepy. For less than a U.S. Dollar (half if you’re a student, or, in my case, a “student”), you can tour the elaborate museum. 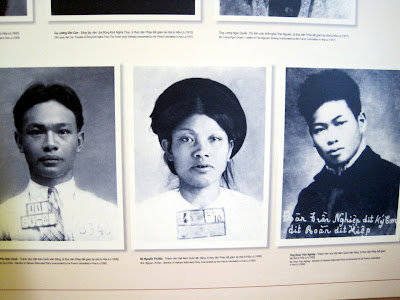 What I realized during the tour is that the prison was used through the vast majority of its existence by the French colonists to cruelly imprison Vietnamese freedom fighters. All that hubbub about our McCain, when the bulk of the prison’s historical inmates were Vietnamese!

Along the walls are informative, creatively translated information posters and hundreds of photos of Vietnamese prisoners. Most eerie are the metal sculptures of both male and female prisoners chained throughout the building. Some cells have holes cut out so you can peer in to see the haunted metal eyes of the statues and begin to imagine how a life like that would be. 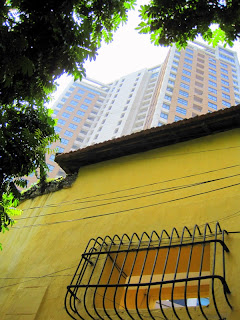 And now for the jarring juxtaposition: The remains of Hoa Lo prison now nestle right against the largest, most modern commercial building in Hanoi: Hanoi Towers. 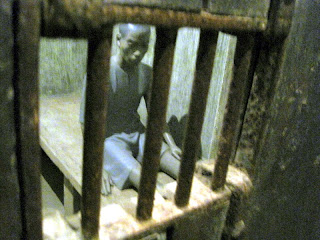 After my prison tour, I wandered through flashy Hanoi Towers with my mouth agape. For the first time in my month in Vietnam, I felt truly re-immersed in that glossy, sterile calm of Western Modernity. I gaped upon seeing a drugstore larger than a corner hut! And yet– six aisles of sleek boxes and no contact solution in the whole store. (Note to long-term travelers: stock up on eye products before rocking out the Developing World.)

As I chatted with the well-coiffed stylist at The Hair Workshop about hair coloring prices, I remembered the report that John McCain’s hair turned totally white during the maltreatment he endured in Hoa Lo. I thought of the prison just a few feet away, through the marble walls. 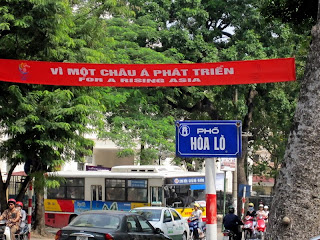 How Vietnam has changed! 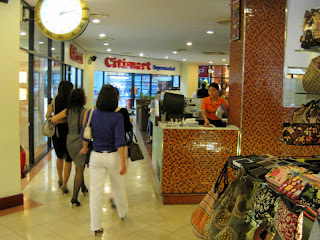 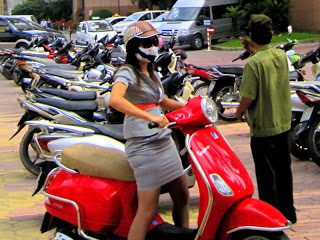 Wow. I just realized after reading that article that John McCain has been through a lot. I can't believe they refused to treat his wounds. So cruel. It seems like a really interesting place but as Spencer said, it does seem really creepy. It's a place that I would think would be haunted. Those statues look so cool.

Sounds like a really creepy place. I wonder how many people have died in there guessing that people died in there because they wouldn't treat McCain's wounds.