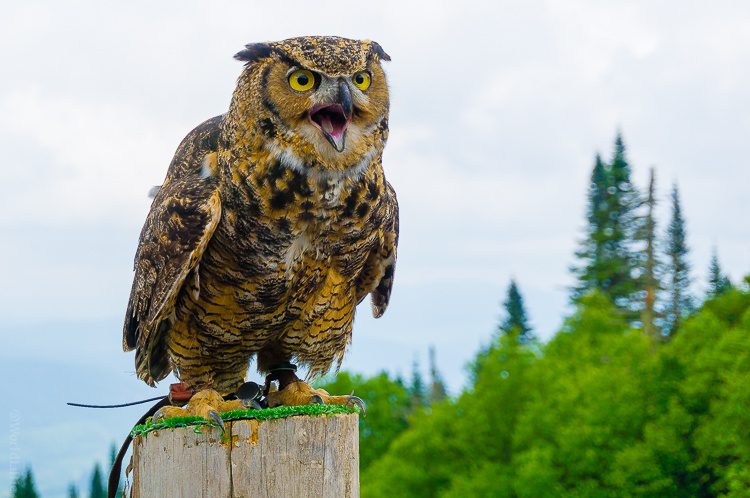 An owl up close in Mont Tremblant, Quebec!

High atop a mountain in Quebec, Canada called Mont Tremblant, a dramatic “Birds of Prey” show awaits you. Colin, little Devi, and I arrived in the delightful town of Mont Tremblant after a drive of less than two hours from Montreal, and headed straight for the birds. Squawk, squawk! 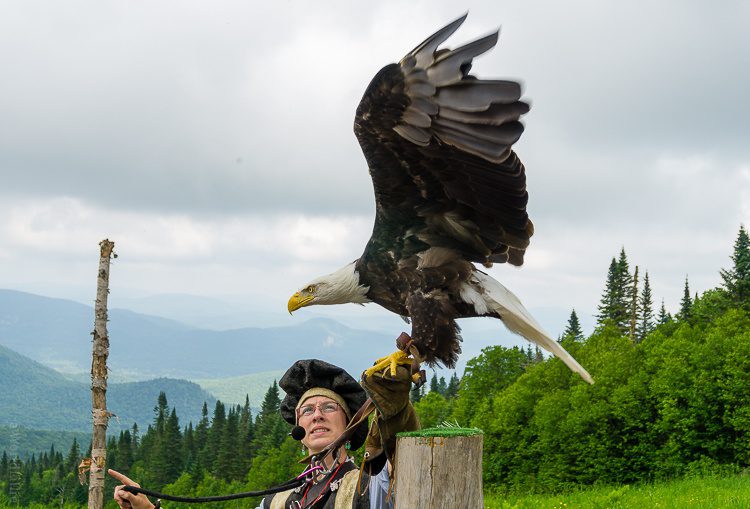 Careful — the eagle is getting away!

Few shows have such a luscious backdrop. The Laurentian Mountains are a soothing undulation of green and blue, and we settled onto the benches with twenty other people as the show commenced. Out burst an educator-actor in Medieval garb, setting up the drama: She had traveled in time to the future to debate with a modern bird expert! 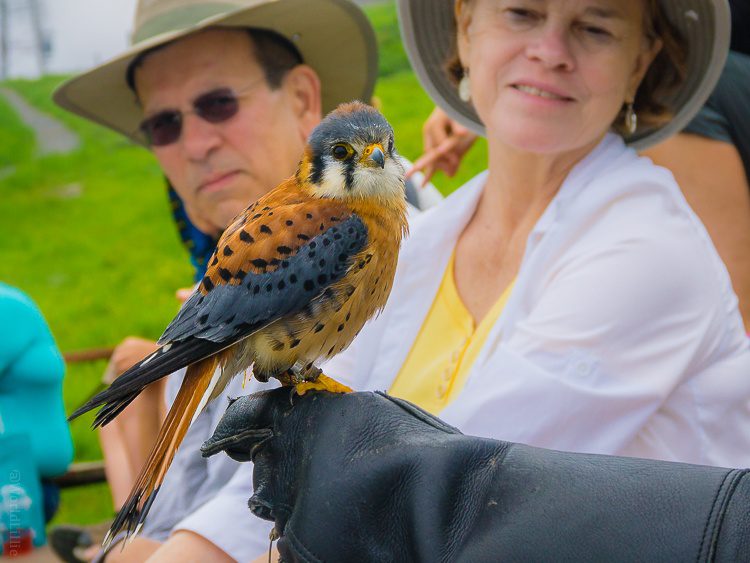 One by one, the actors brought out different birds of prey, prancing and swooping around with them, and motivating them with bloody hunks of mouse meat that they hurled into the air or placed tantalizingly on the posts so the plumed beasts could pose for our cameras. 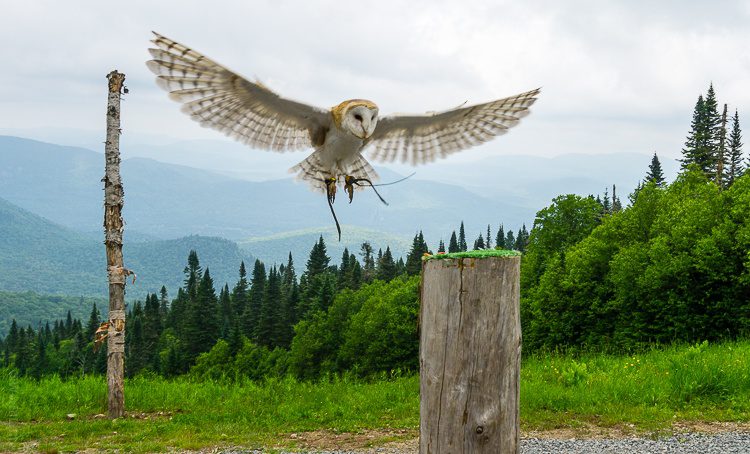 The white owl kind of creeped me out, but I like this photo.

Like everything in Quebec, the show was completely bilingual between French and English, and the script was written in a clever way so that it didn’t seem repetitive. The Medieval woman would say something in French, then the “modern” lass would respond in English, “I think what you’re saying is __?” inserting the translation. Clever! I am so inspired by the bilingual prowess of Quebec. 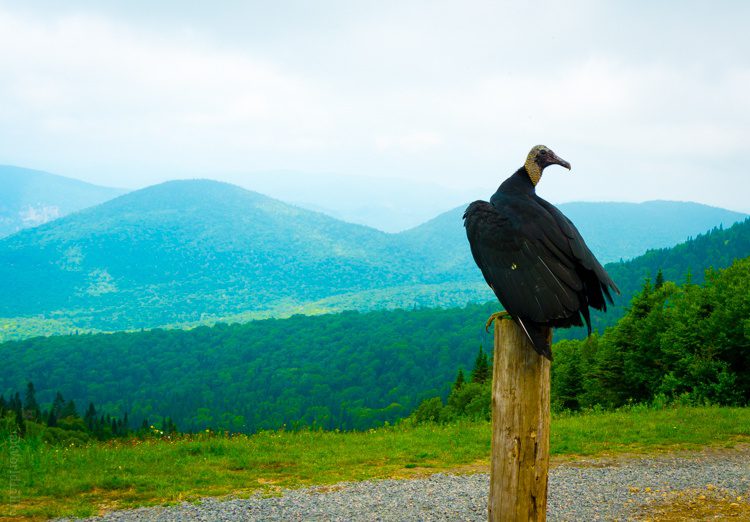 The drape of the vulture’s wings reminds me of a couture ballgown.

As you can see from these photos, there were a whole bunch o’ birdies. Highlights included two majestic owls, an eagle, a vulture which had the funniest bopping trot-walk, and a little bitty bird that I didn’t find especially predator-like. 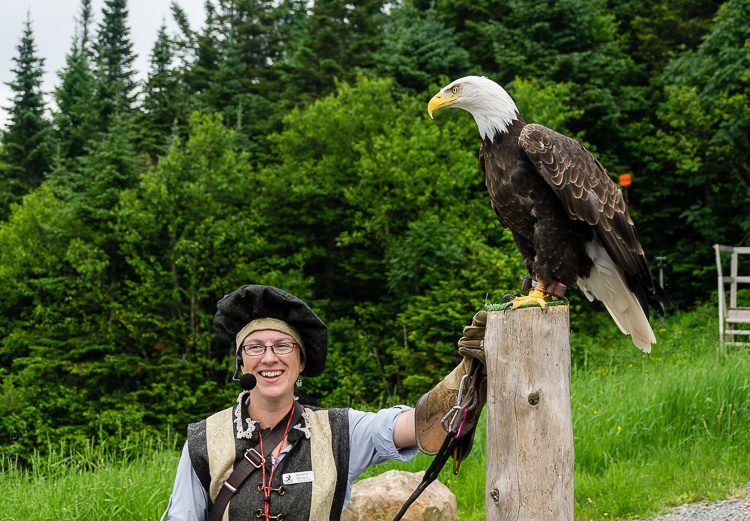 That eagle sure is regal.

Speaking of fear, how did our toddler, Devi, do with birds of prey in his face? Er, he would have preferred more crackers and fewer scary birds. He was a little nervous! So there’s a tip for you: Be prepared to snuggle and soothe younger children if you go to this show… but still go, because it’s guaranteed fun for adults and older kids. 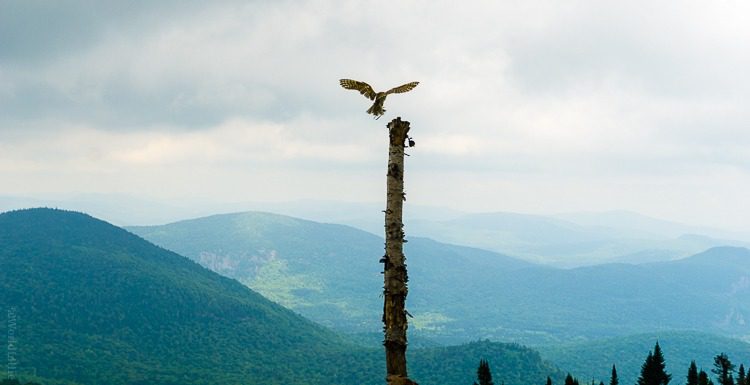 The Laurentian Mountains provided a dreamy backdrop for the bird show.

Of all our new feathered friends, my favorites were the eagle and the darker owl. Truly, they are awe-inspiring creatures that made my heart pound with love. If you look at this photo of the owl, below, you’ll see that it actually looks super cuddly. Don’t be fooled, though — it is most decidedly a bird of prey, and that beak is no joke!

The owl in a calmer mood… but don’t cuddle it.

So what about you? Which is your favorite bird here? Have you ever been to a birds of prey show, or the Laurentian Mountains? Do share!

See all the articles from our Quebec City to Montreal road trip.

Check out my article about 40 examples of drawing inspiration from around the world — including this spot. 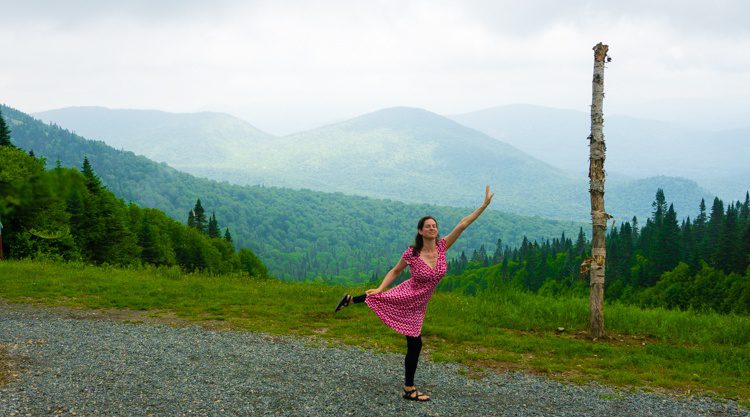 We were guests of Mont Tremblant, but all opinions and misguided urges to cuddle owls are mine.

The Best Cities to Visit in Canada - Family Travel Magazine

[…] There are rock walls to climb, bungee trampolines, gondolas to the top of the stunning mountain, a birds of prey show, mountain luges, luscious hotels and pools, a lake with boating, and delicious food. The […]

Good photos. The Eagle is my favorite, but I also like the bird with no feathers. ha

I just LOVE Owls. We need to visit!

Wow you got some truly fantastic shots! I can never photograph birds in flight, so I'm super impressed by anyone who can get that clear, crisp an in focus photography. Super impressed! Haven't been to Mont Tremblant, though will definitely include it on our list for when we do eventually visit Quebec.

I thought it was cool to hear that an exhibition like this is done in both French and English, and glad to hear it didn't get repetative for you. Sounds like it was a fantastic experience - can't wait to head there for myself!

Thanks! I was highly pleased at how the photos came out, but will add the background secret that I took over 250 photos during that hour, and every other photo but these was a blur! :)

Amazing photos of amazing birds Lillie. Well, apart from the odd-looking pink one at the bottom ;)