My beloved Boston from a plane… “Same Same but Different!”

Blogs are supposed to be honest, so after a bunch of weeks of trying to hide it, let’s be honest here: Things are weird.

I suppose it was to be expected, right?

You can’t just uproot your life and meander around the world for nine months, then come home and expect everything to be silky smooth.

The best way to describe this dizzy feeling of being back home after so long away is the classic Southeast Asian remark: Same Same… But Different. Here’s why:

1. Social Life: When you’re 28, a lot happens in your social circle over 9 months. While I was abroad, a bunch of folks got engaged or married. Some moved away (heck, my best friend in Boston moved to China a few weeks after I came home), and others are sprinting down new paths, though they’re still in Boston. Many remain dear, dear, dear soul-mates but the fact remains, for better or worse: my whole social landscape in Boston has changed. 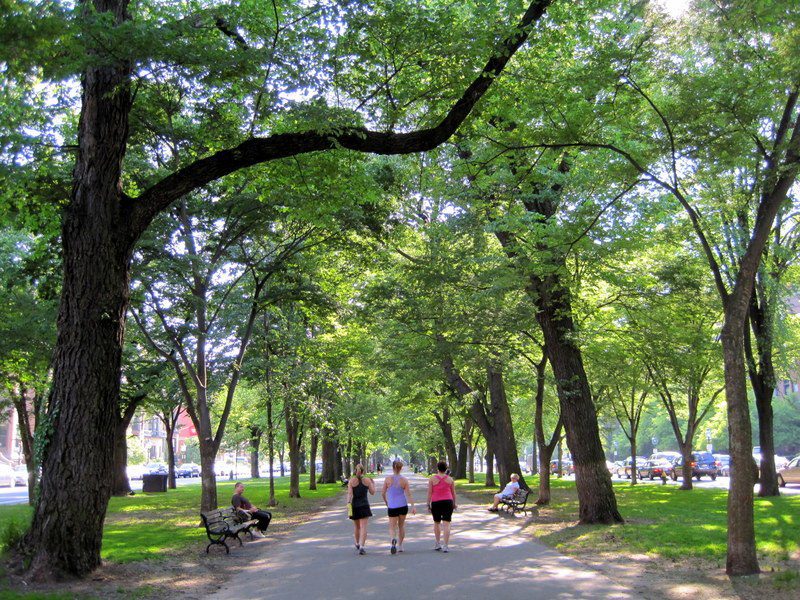 The gorgeous greenway along Commonwealth Ave. in Boston

Add on top of this my new online travel world chums. In the almost-year I was traveling, the online universe became the only solid home I could return back to each night, and so I became extremely attached to people I’ve never set eyes on.

When I finally met a bunch of them at the TBEX10 Conference last month, it was emotional and beautiful! But that also changes one’s social scene, doesn’t it: having friends on the computer instead of down the street?!

Part of me wishes a magic new social circle would descend, sparkling, from the heavens and make everything feel tethered again… but part of me knows this current strange aloneness is all right, and even necessary. I spent a lot of time alone when I was traveling, and it’s forgivable to embrace that a bit more before rebooting.

2. Work and Future Career Plans: It feels really good to work (and get a paycheck again!) after 10 months of living off savings and not having a single routine each day but writing. And it feels great to be an officially productive member of society! That said, when you realize it’s POSSIBLE to travel for nine months and not work, you begin to salivate a bit and scheme further possibilities.

Suddenly, you realize that a lot more life situations are doable than you originally anticipated. It’s as if five-thousand thrilling doors were simultaneously thrown open, each beckoning you to enter. You know now that you can accomplish most things you put your mind to… and so which luscious door are you going to put your mind to entering? It’s a wonderful feeling, but boy does it spin your head! 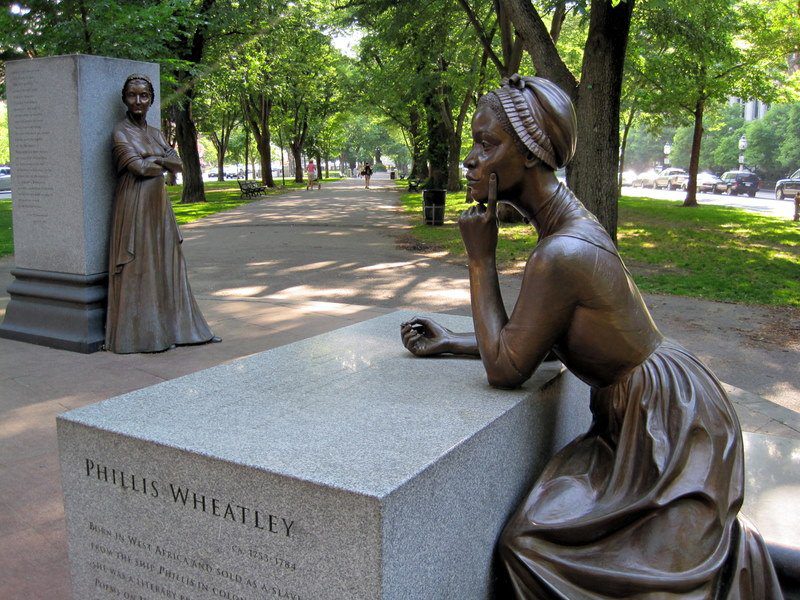 The Phillis Wheatley statue on the Comm. Ave. Greenway, so thoughtful!

Add to this the cyber-element again: In addition to my ESL teaching job here in Boston, I’m also technically working a few other jobs, by my passionate choice. First, there’s the upkeep of this blog, my baby, but there also is coordination for Boston’s awesome September 14 Meet Plan Go conference on career break travel (free registration is now open!), and fundraising for students in Ghana.

Online work is super-awesome, but also a bit lonely! I scheme to have similarly working buddies in town who can plop their laptops next to mine and silently provide solidarity.

3. All this STUFF: What is all this stuff piled in my room? I lived out of a tiny blue bag for nearly a year and was just fine. Now I’ve already sent three heaping bags to Goodwill, but there are still childhood rock collections, High Jump trophies, and lots and lots of piles of paper. Oh my! Same stuff, but I’m definitely looking at it differently.

4. Stubbornness: I was one hundred percent my own boss for nine straight months. You fill in the rest.

5. Responsibility: When I was traveling, I had to be ridiculously responsible in the sense that I was a woman, totally alone, in Asia, Latin America, Europe, and Africa, and constant altertness was mandatory for safety. But in contrast, I had a complete reprieve on other major features of adult responsibility: cooking, cleaning, driving (not that I can drive anyway), and work. Coming home, then, I’ve got to step it up in some realms (clean baby, clean!) and let it go in others (stop being such a control freak). Internal see-saw shift! Ker-thump. 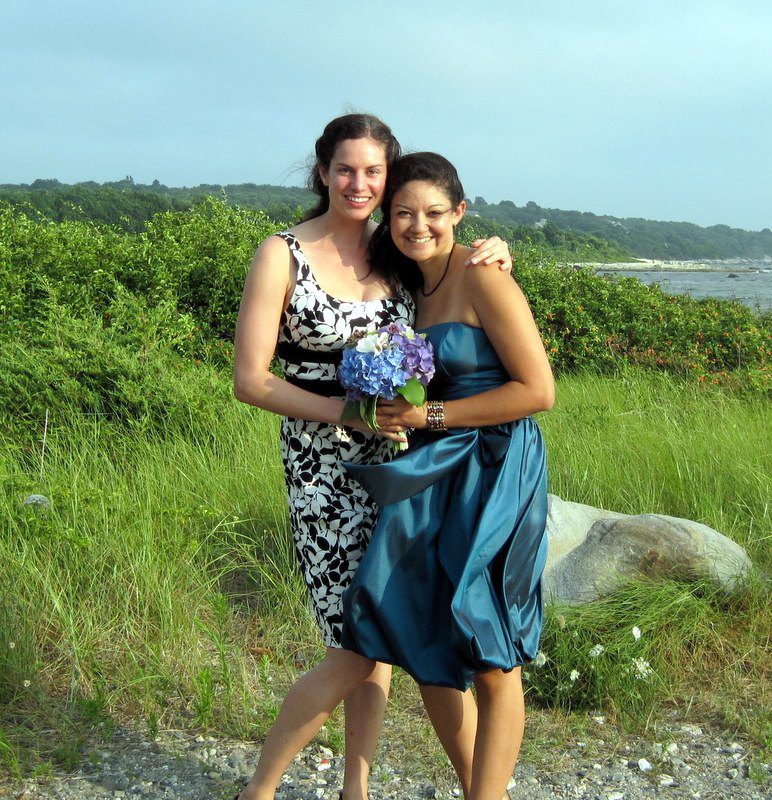 Me and my dear college roommate at a recent wedding

6. Money: I spend soooo much more money each day in Boston than I ever did while traveling!

7. Bad Habits: Part of why I left the country in the first place was to get out of non-fabulous ruts. Now back home, I’m proud to say I HAVE gotten out of many of them… but alas, not all.

8. “Nice” Things and Places: After 9 months of frequently roughing it (30-hour buses without a bathroom, anyone?) I return home with a strange new lust to be around the nicer things in life.

When I left Boston I was an anti-materialistic hippie. Now I find myself strolling by the posh cafes and shops of Newbury Street, breathing the soft air as it swirls through green trees, not really buying anything, since I don’t have the money, but enjoying the easy embrace of the environment! Clearly, this phase won’t last (the hippie always returns) but it’s a shift to note.

9. Commitment: When you’re on the road, you can hightail it instantly out of any place where the scene or aura does not mesh with your soul. Now that I’m back in my beloved Boston, I can’t stop thinking: “How long do I want to be here?” or “When is my next trip?” I don’t know the answer to either of these questions, but I do know they’ll develop soon, and I’ll keep you posted!

At a recent wedding I attended, one inspirational speaker gave us the secret to happiness:

“The secret to happiness is simple: Have someone to love, something to do, and something to look forward to.”

I’m feeling rather odd right now because every single one of those elements is currently in flux since I returned home from journeying around the world! But in the end, (of course!) I feel massively thankful for the abundance of opportunity that brings the dizziness and on-and-off lonely swirls. It’s all good, man… it’s headed somewhere great, and it’s not so bad at the moment, anyway. Just… Same Same but Different!

Yes, trying to get back into "normal" life is a very strange and awkward experience. I know many people who decided that they simply couldn't handle life in the states and moved away (I fall into this group). Others decided that it was working that didn't really make them happy, so they simply stopped having jobs (a buddy of mine in Thailand falls into this group). Finally, others make the slow transition back into "normal" life. What ever you ultimately do, good luck and enjoy.

Thanks! As you can see by subsequent articles, it's turned out pretty fabulously!

I can only imagine what coming back is like, especially as I'm only just about to embark on a RTW trip. I've spent weeks clearing out all my crap - the trophies etc all went into a yellow 'happy box' to be stored in a cupboard, and pretty much everything else went to the charity shop.

Couchsurfing and MeetUp might be good sites to try out for finding new friends at home. Couchsurfing encourages regular town and city meet ups that welcome both locals and travellers, and MeetUp is usually full of all sorts of local groups like cinema goers, musicians, culture vultures etc.

Good luck and I hope you don't feel too restless. And if you do, start saving for another trip!

Oh Fab! Sorry for being a dunce, totally didn't notice this was from 2010! D'oh! I've just discovered your blog and not sure how I found this entry first but anyway, glad things are going well and I'll continue to read all your past posts now..!

Thanks for your kind comment! Since I published this article, things have REALLY turned around, as you can see from this recent recap: https://aroundtheworldl.mystagingwebsite.com/2012/12/29/travel-writing-and-love-reviewing-a-great-year/

You will have a WONDERFUL around the world trip, will also likely have an odd readjustment period after, then get right back on your feet, better than before! So many of the good things that have happened are due to having seen the world for a year!

Thanks for the article - i'm one week home after 15 months of traveling and am feeling unsettled as well. mostly i'm sad that my social circle has moved away/changed - i feel like I'm starting all over again. also, the job search process is getting me down (and i'm only a few days in to it!) - mostly because there feels like so much pressure to get another high-paying, high-stress job or I'm a failure. I definitely think it's a very "American" approach - my friends and people I met in Europe and elsewhere approached their jobs as a necessary part of their lives but were focused on happiness and contentment instead of the number of zeros in their salary. So I'm resolved to not fall back to the same "rat race" that I escaped 15 months ago.

Anyway, thanks for relating.

Jules, thanks so much for your comment. Solidarity! After months of post-travel freakout, I finally found a job that is an amazing fit for me, and I can now definitively say that a year of travel HELPED my career and social circle... but I certainly didn't see that when I first got home! Do be in touch, and best of luck.

I will tell you the real reason why you feel weird. It is not because of your reason but because of airplanes. Like those things are so scary. Like man are not suppose to fly. That is why every time I go on one, I sit next to my mom.

I enjoyed this post because it is exciting to see how much travel changes you. We've just started a long term trip and we still can't imagine going home. Everything is still fresh and new. However, talking with friends who have done this before there comes a time when you yearn to return to the familiar.

I like your quote about the secret of happiness. I wonder if you can find this happiness on the road or if everyone has to eventually settle down.

I'm keen to find out.