These recent pics from Times Square, NYC are rather unrelated…

Nicholas Kristof’s fascinating recent New York Times article about unwise budgeting by some of the world’s poorest families, “Moonshine or the Kids,” reveals a truth that applies to all classes of humans around the world: We’d each have a whole lot more money if we stopped spending piles of it on silly things.

That in mind, let us take a tour of the stupid things I did and didn’t spend money on during my nine month journey around the world. If you read this article well and use its lessons to plan ahead, you will find yourself several thousand dollars richer than me at the end of your travels!

A.) Stupid Things I Wasted Money On During RTW Travel.

1. ATM Fees. For months before I left, I had at the top of my To Do list: “Obtain credit card with no international fees!” But the Procrastination Beast bit hard and I never got around to getting one. 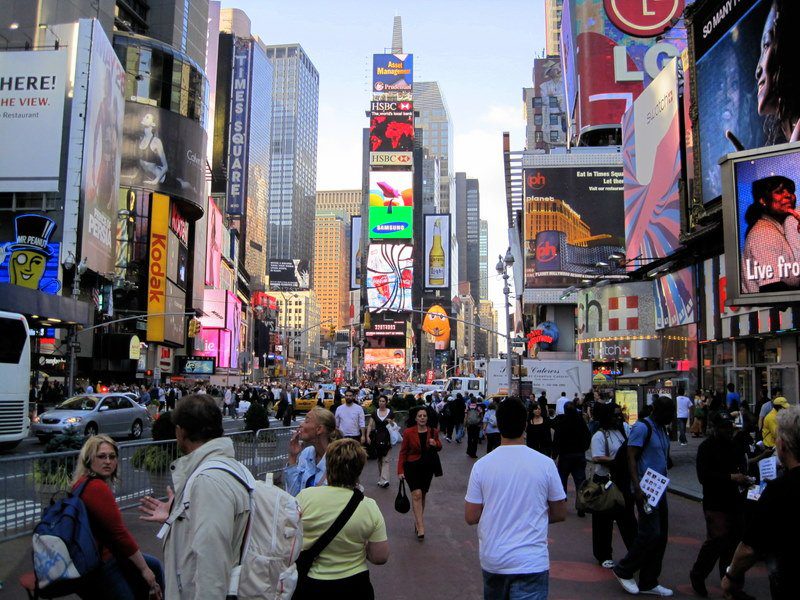 …but NYC is the Capitalist Capital! Not to mention expensive.

Thus, if you calculate that I was charged between six and fifteen dollars every time I withdrew money with my standard Debit Card, and that I withdrew money at least every two weeks for nine months abroad… it makes a gal swoon with the fury of waste. Don’t let this happen to you!

2. Flight changes. I was convinced by my kindly flight booker to purchase the longest flights of my Around the World journey in advance. On one hand, that is a nice strategy because it helps an impending RTW journey feel “real.” I also was told that it would help avoid getting stuck somewhere or being denied entrance to countries like Thailand which require proof of onward travel.

But what an unbelievably thrilling place NYC is!

On the other hand: your RTW plans and itinerary WILL change. In fact, my plans changed so much and so frequently that I ended up changing or canceling EVERY SINGLE LEG of my seven-leg set of flights over the course of nine months. If you calculate that each flight change is at least $50, my hollered advice to RTW travelers is now always: Buy as few plane tickets in advance as you can! 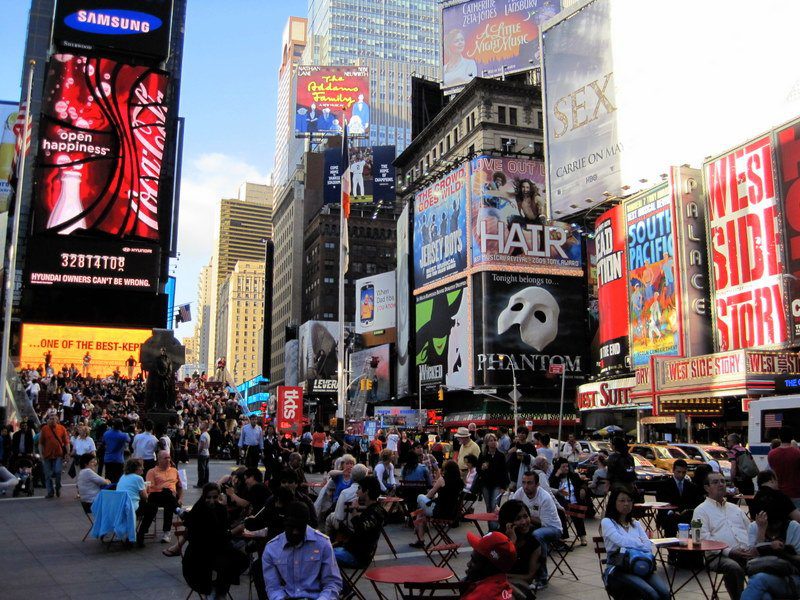 The new free seating area in Times Square is awesome.

4. A Phone Contract. When there’s a shiny new phone in front of you that can be yours for just a few bucks if you sign up for a two year contract, it’s awfully tempting to leap into Contract World. However, if there is any chance at all that you will be traveling for an extended amount of time, think again!

The cheapest way for me to use my phone abroad was to unlock it (a complicated process that required calls and secret codes but eventually worked) and then use local country SIM cards. Unfortunately, for eight of the nine months I was away, my American contract was still chugging (or rather, cha-ching-ing) away!
Ultimately, I decided not to pay the fee to break the contract because A&T has a “Hibernate” feature that can be used once a year to deactivate your account for a few months at the price of $10 per month, total. That said, I’m now going to be far more careful about signing those long-term documents! 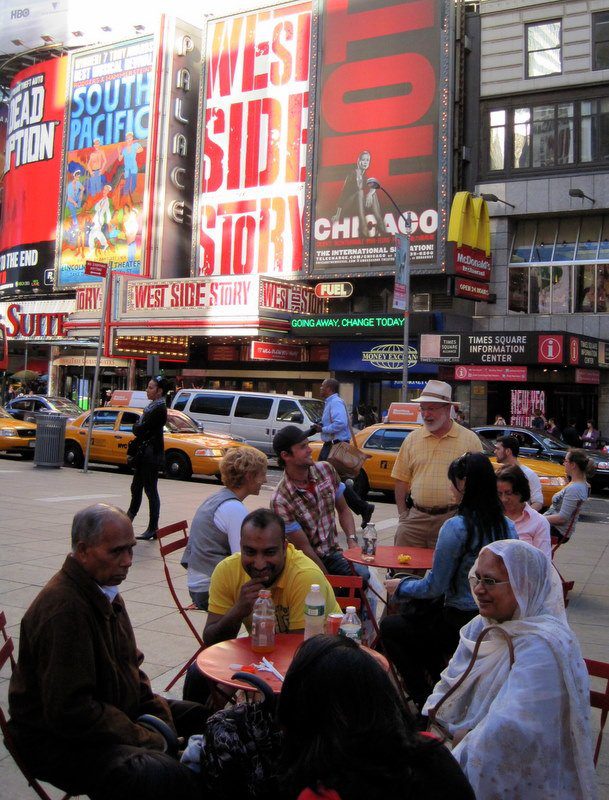 The world meets at Times Square

5. Little snacks and beverages. I’m such a sucker for little local munchies and sip-ies. Alas, a few dollars a day every day for nine months does add up! However, it could easily be argued that the cultural learning gleaned from eating a new street food a day is completely worth the diminished bank account!

Disclaimer: Despite these lapses of judgement, I did ultimately return back to the U.S. with enough money still saved to subsist on for a while. Yay! All the strategies for saving money before the RTW trip paid off! Now onto some wise choices made overseas:

B.) Stupid Things I DIDN’T Waste Money On During RTW Travel.

1. Souvenirs. Will Uncle Harry really care about that wooden carving of a frog drinking a Thai beer? Unlikely. I recognize that some folks truly believe they will be pounded to death if they do not bring back piles of mediocre gifts for every friend and family member in sight, but the whole practice seems a bit misguided to me. Can’t we just volunteer somewhere and bring back sweet drawings from our students?

2. Expensive Clothes. I had a hysterical breakdown in a Massachusetts bra store the other day because my brain had not experienced the “Shopping” phenomenon for ten months! You save a lot of money when your backpack only has room to fit one new shirt per month! And apparently a part of your brain also becomes dormant. 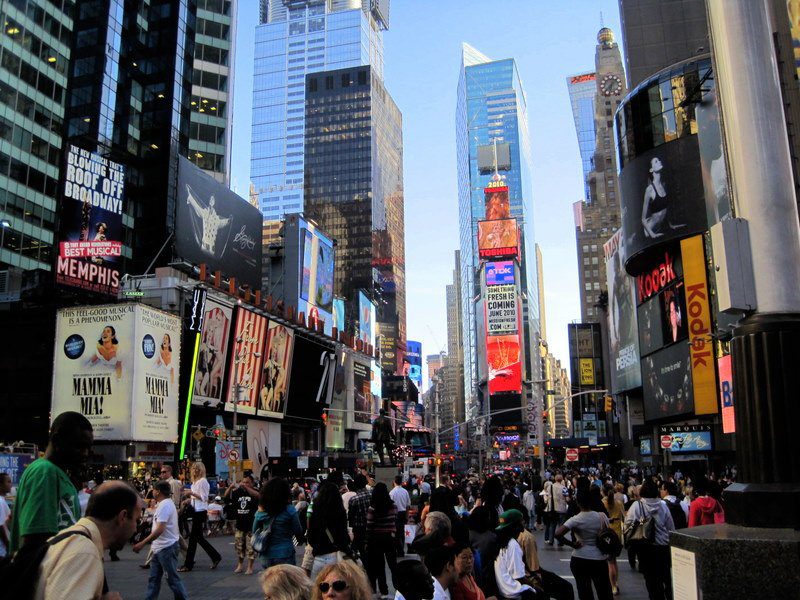 The joy of NYC! Like the joy of saving and spending :)

3. Pricey hotels and expensive forms of transport. For nine months, I did a whole lot of scrimping on lodging and transport, which rather added to the adventurous thrill of the whole journey. Thirty hour bus? Fun!

4. Froofy cocktails. Back in Boston now, suddenly I remember how much we agree to pay for our beverages here! Though the prices tend to be cheaper in developing countries, you can save a whole lot by steering clear of that set of girly drinks on the menu that are seven times the price of the others for no reason other than the tourists will pay it.
May these thoughts help you save your hard earned bucks for a worthy cause! But despite this calm advice, let us also acknowledge that sometimes the joy gleaned from a bit of “wasted” spending CAN be worthwhile.

Traveling cost a lot of money. That's why I don't travel a lot. If my family has a trip, all of us goes except for my grandma. But that's 5 people, and just a place ticket is a lot of money,

These tips are extremely helpful considering the fact that I plan to travel out of the the country one day, and I've always been one to try new things in the cheapest way possible. Thanks for the tips!!

Great tips. Getting an unlocked phone and using local SIM cards is the absolute cheapest way to communicate while traveling. If your planning on going and don't have an unlocked phone (or can't get yours unlocked) - not to worry! You can find phones in Europe and Asia for relatively cheap compared to here. Though for smartphones (iPhones, Blackberry's) it's best to source in North America because of prices overseas.

Little snacks were my biggest downfall in the beginning. I thought I needed to arm myself with food and water when on a day long bus trip. Now I travel with nothing as vendors are on the bus every stop anyway. I will not starve!

Great basic tips. Will add one that took me a bit to get into, given that I'm an older traveler than most doing the RTW gig.... dorm rooms. Easy way to meet people. Cheap. And though I'm in my 40s (EARLY 40s), I never really felt too old for the dorm room world.

That being said, I needed a single room for a night or two every week. The 20-something party kids coming in at all hours did run me down some. LOL.