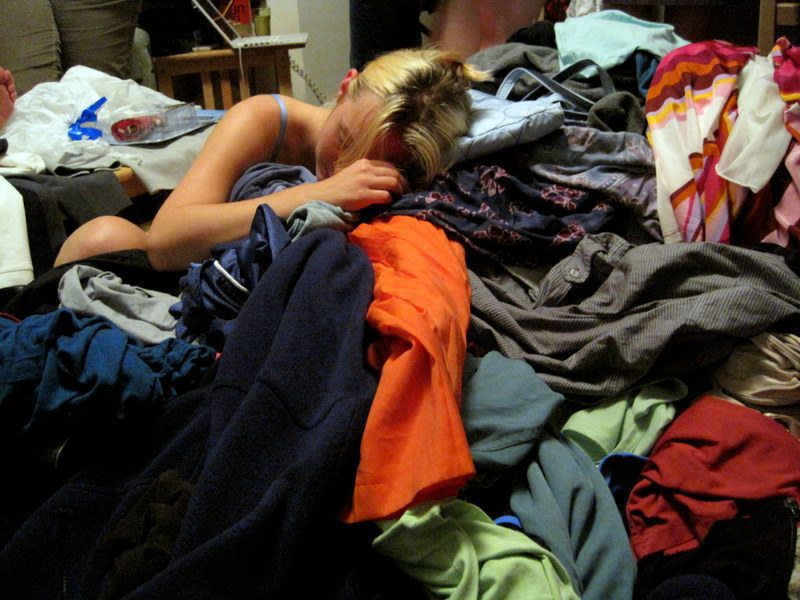 Passed out in happy exhaustion atop Clothing Mountain

Yes, that IS a woman passed out in euphoric exhaustion on a four-foot-tall heap of clothing. Want to know why? Read on.

Saving money to do awesome things like travel is often a matter of making small sacrifices (or put more positively, “alterations”) in your budget that add up over the long term.

One such alteration that can save you thousands of dollars a year is this: instead of buying new clothes, hold monthly Clothing Swaps.

“What the heck is a Clothing Swap?” you may be asking. Here’s the short answer: a Clothing Swap is when a big bunch of same-gender folks get together with bags of clothes they don’t want anymore, dump them into a pile on the floor, and leave with heaping bags of “new” clothes from their friends’ wardrobes. In a single evening, you can get rid of all your unloved, worn out duds, AND fill your closet with excitement… all for the low price of Zero Dollars!

Here are the delicious details for how to make a sensational Clothing Swap happen.

Step 1: Nail down a strategic date and location.

Regarding the WHEN, you will need to identify a date when a sizable bevy of your same-gender friends are free. I’ve found weekday dinnertimes to be best. Doesn’t Tuesday at seven pm sound succulent? 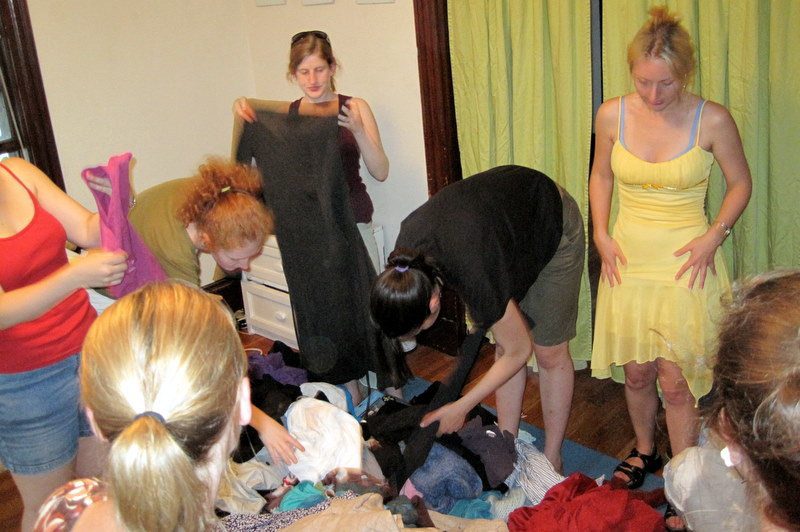 As for WHERE, find a place with at least one large, clean, private room of an apartment with good ventilation and at least one mirror (and/or space to move mirrors in). Geographically, the place should be near both good public transportation and good parking, so that folks can come from far and wide.

Oh, and people WILL become half-naked (or mega-naked) so make sure the shades pull down.

Create a Facebook invitation (the “Open” type that anyone can see), and explain the date and neighborhood of the swap. Get as many people as possible to RSVP “Yes” by urging friends to post it on their Walls and forward it around their extended networks.

Explain to folks that the exact location will be revealed a few days before the event via private message (use the Facebook Event feature that lets you mass message all the folks who RSVPed “Yes”). Also send out a message to the “Maybe” RSVP folks a day or two before the Swap saying they need to decide whether or not they’ll come if they want to know where it is! 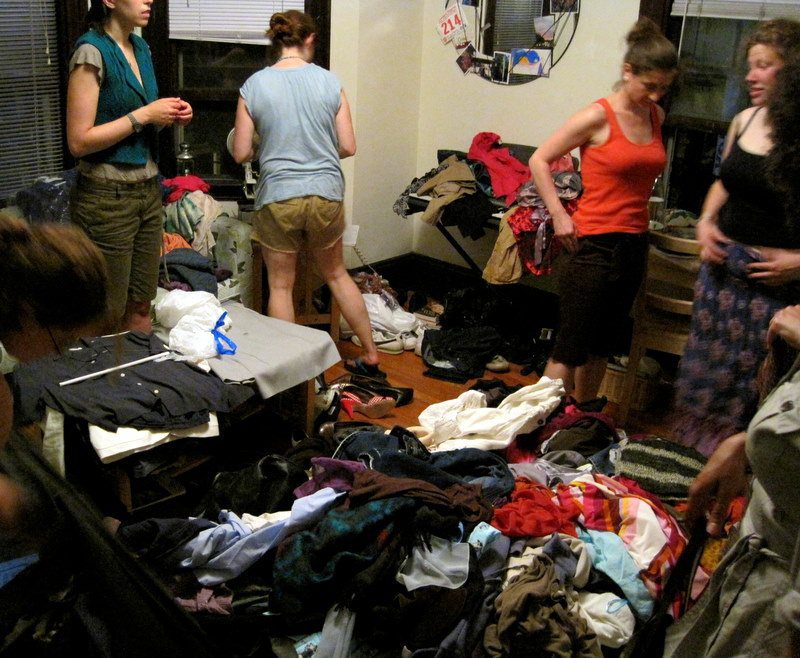 Oh, the treasures that we found!

In this way, you can advertise the event as widely as possible, while maintaining final veto power over who is allowed knowledge of the location.

This is particularly important because you WILL get one to five wisecracking male friends RSVPing for your Swap if it is all female.

Yes, they will post something on the Event Wall like, “I’ll be sure to bring my best flowered underwear to swap. ladies!”

Just delete their sass and don’t tell them where you’ll be.

Step 3: Keep an eye on size, and give guidelines about what items will Swap best.

Humans come in all shapes and sizes, but if there is only one lass at your Swap who is giant or tiny, she will feel left out and leave empty-handed. Do your best to recruit a range of bodies!

Also remember that people who may not be able to physically be at the event are often more than willing to donate a bag of their unwanted clothes, if you are able to arrange a pick-up. In this way you can increase the Swap pile bulbousness as well as expand the size range. 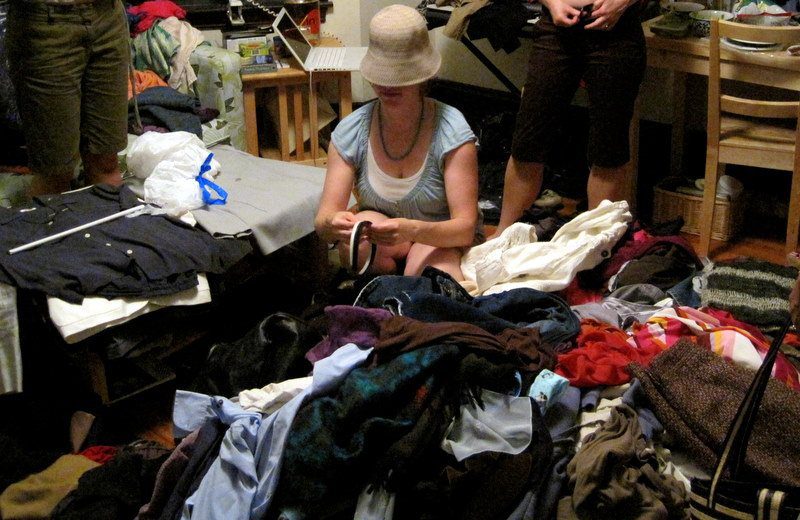 This photo is so cute… Part of a Swap is experimentation!

Folks will also want you to provide such guidelines on your Swap invitation as: how worn out an item is allowed to be, whether lingerie is acceptable to Swap, if shoes and accessories can come, whether other items like plastic bobble-headed nuns are okay (yes, we did see these at one swap), etc.

In general, create these guidelines by thinking: “What will realistically get picked up by another person?”

There are only so many times a ratty company giveaway tee-shirt can find a new home before it becomes a dishrag. On the other hand, my mother contributed a few suits to one pile that she thought would be too frumpy for the youthful crowd, but almost all of them got snatched up because they were of good quality and could be worn in various hip ways.

Step 4: Coordinate the refreshments, music, and mirrors and ready the space.

Specify on the Facebook Invite that folks should bring some snacks or beverages (or downright Potluck) if they are able, but remember that if food stocks run low, you all can just chip in for some pizza delivery. Also make sure at least one person brings a large mirror to supplement the ones in the apartment. Set up a table for food and drinks in a corner and get some good Swapping music toodling! And now, at last, you are ready to…

Hooray! So fun! So useful and money-saving and wardrobe enhancing! So exhausting yet worth it! On the evening of your swap, between five and twenty women will show up and dump their bags of clothing onto Clothing Mountain. Everyone will squeal and dive towards what another lady has unloaded. Shirts will fly off. Pants will be draped over chairs. Cookies will be eaten.

BE CAREFUL THAT EACH PERSON DESIGNATES A “SAFE” AREA/BAG so that the actual clothes and shoes she arrived in don’t get taken for Swap meat!

Accept that some people will literally collapse in exhaustion, so allow the freedom to sit and chill when needed. Accept that it will be exhausting but AMAZING.

Step 6: Donate the leftovers… or keep the Swap cycle going! 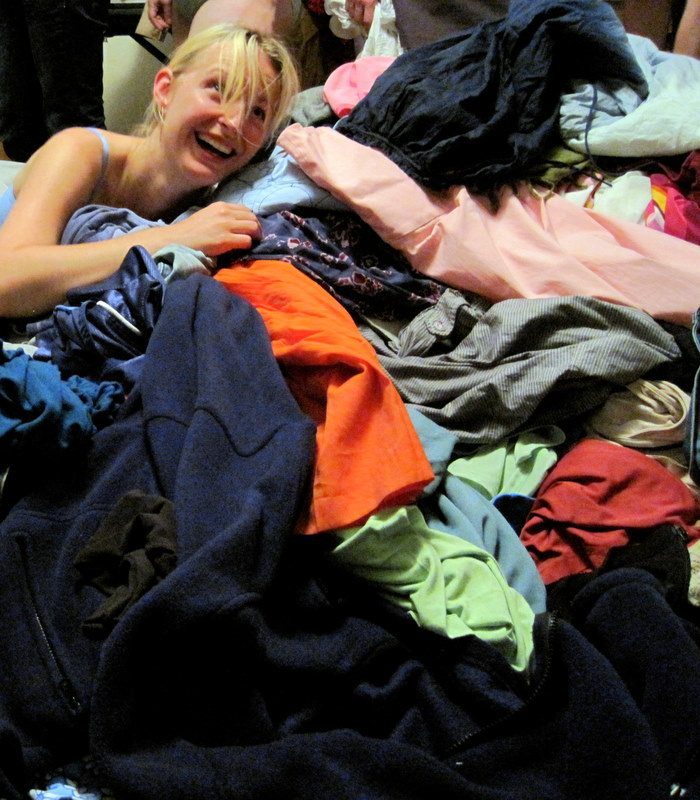 She woke up! And now she has a free new wardrobe!

At the end of the night (likely one to five hours after the start of the Swap), many merry ladies will head home with bags full of “new” clothes. You will inevitably, however, still have a heap of uncool, unclaimed duds remaining. Make sure enough garbage bags and people with cars stick around to package the remainders and drive them to the nearest Goodwill to donate.

Alternately (ooo, get ready for EXTREME, UNENDING Clothing Swap World) you can link up with a Clothing Swap that is happening nearby the same week, and see if those ladies will drive over at the end of the night to pick up your remainders as the base of THEIR impending Clothing Mountain. Did your brain just explode??

So there you have it: a concrete and super-fun way to save thousands of dollars a year.

Do leave a note here if you have any further questions, or have tried Swapping and want to share your story, and do tell how it goes if you try it in the future! May the super-saver Swap be with you.

That is smart and it looks very fun. It would be like treasure hunting for clothes. I hate it when I have to go shopping. It takes so long and it is very boring. I like going to shop for shoes. Shoe shopping is fun and it doesn't take long.

This sounds like a good idea. Its really creative, and the fact of all the clothe not being folded makes it even more fun. Its like swimming around in a pile of clothe.

That's smart! I think I should do that. I donate clothes too. I think a lot of people take advantage of all the clothes they have. Some people barely have any. Like the poor people of third world countries. Some people may not realize it, but we have a lot of of clothes compared to a lot of other people. Donating the left overs is great! We get rid of clothes we don't want, and we still help people out =)

I have another idea. An easier way is just to fold your clothes! See this would never happen to me because my mom never lets me get out the house until my room is cleaned and all my clothes is folded. Its a drag but I want to leave so I got to do what I got to do.

check out clothes swapping online with www.iswish.co.nz Great features including being able to swap for credits as well as items which can increase the success rate. Also check out the fun "mirror match" which reveals others with the same body shape as you...scary biscuit:)