Chew on this: The United States population is comprised of something like 14% Latino folks, 13 % African Americans, 5% Asians, 66% Whites, and 2 % other. We’re a melting pot! A salad! A multicolored stew! In Japan, however, the “largest” minority is a paltry 1.5% (Chinese) of the total population!!! According to my friend Mike who I stayed with in Tokyo, there are just 8,000 Americans in Japan (about the size of one medium college!) and just 2,000 Canadians (of which Mike is one). Japan is homogeneous!

This begs the question: How does it feel to be a non-Japanese person LIVING in Japan? For this I turn to the experiences of Mike (a White Canadian), and Gordon (a Black American), as well as popular Japanese advertisements, and scenes on the street.

Wandering about in Tokyo and Osaka, I did not feel stared at, despite being the only person like me for miles. (I do hear the countryside is a different story, though.) That said, on any street corner, there lies a little slap in the face for me and my fellow Americans: The latest McDonald’s spokesman is a pudgy, supremely dorky, bespecled “American” man who says such things as (in the Japanese equivalent): “Me likeee Japoon! Me likeee McDonalds! Yum yum in me tum tum!” Apparently there is a campaign afoot by the “king of foreigners” in Japan to “abolish this racist trash”, but until then, the “Nippon Allstar” dorks away all day long. 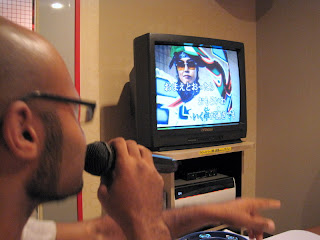 Being a Black man in Japan seems to have all the joys and perils of the exotification that stems from rareness. Dark skin is extremely uncommon, and thus it is seen in many facets of Japan as extra cool. When does this get a little creepy? Well. As you walk through the streets of Tokyo or Osaka, every few blocks you will see a Black man who has been hired to stand outside a restaurant or clothing store, motioning for folks to come in. (Look closely at the photo I took from Harajuku street, left, to see them!) Apparently the majority of these men are from Nigeria and other West African countries, however when they are asked by Japanese folk, “Where are you from?” they often reply, “The United States!” and are fully believed. Word on the street is that some Japanese ladies flock to these men, believing them to be American cousins of Snoop Dogg, Kobe Bryant, and other African-American celebrities. Whoa! 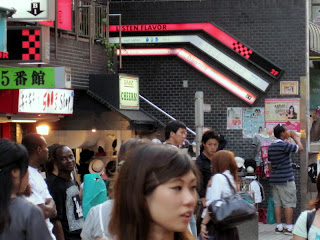 Meanwhile, on TV there is a Black character named “Bobby” who is, in the words of Gordon and his friend, Jimmy, “A really dumb, idiotic Black dude who makes an ass of himself on TV for money, and makes Black people look bad to the Japanese, when in reality he’s a perfectly intelligent actor. Dumb for pay.” Jimmy (Gordon’s Kenyan-Canadian friend) explained, “It drives me crazy when Japanese people tell me, “Hey, you look like Bobby!” or “You talk Japanese weird, just like Bobby!” It’s racism, and it’s annoying.”

Overall, though, Gordon has been delighted enough with Japan to stay for five years, and Jimmy for seven. By and large, they have been treated with the wonderful politeness and respect famous in Japanese culture and Japanese service. In particular, Gordon’s fluent Japanese has allowed him deep connections with Japanese people. (Note the awesome picture of him doing karaoke– in Japanese!!) 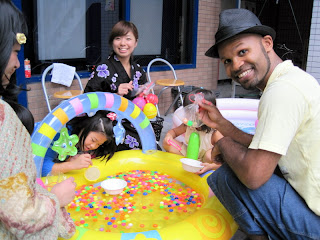 Despite this, Japan is a tough salad to nuzzle into. “I’ve been here seven years, and have a Japanese wife,” sighed Jimmy, “But the thing is, no matter how long you stay here, you will always feel like an outsider.” 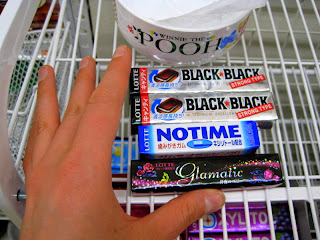 Just then a Japanese boy passed by the three of us on the street and raised his fist in a Black Power salute. “Hey mon!” he hollered in a Jamaican accent. Gordon and Jimmy sighed. “If I had a yen for every time I heard that…” 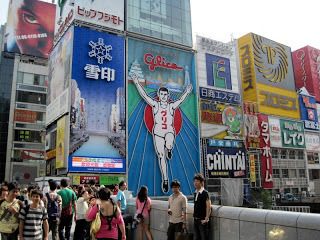 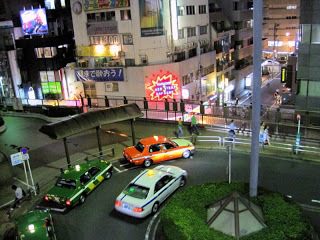 This is a very interesting article! All my life I've been told to treat others the way I want to be treated. I'm sure that Japanese people wouldn't like it if black people saw them and made "Japanese eyes". I find it to be extremely disrespectful and I'm very happy to live in a country filled with all kinds of ethnicities.

I really liked how you used the statistics about both American population and Japanese population, how you talked about how little Americans live in Japan. Also, I thought that it was cool yet sad how one actor playing an idiot can be how people look on a different race.

That was a very interesting article to read. The extremely unequal race distribution surprised me. But what shocked me even more was the racist and ignorant comments you and your friends received. o.o

The government makes it very difficult for outside companies to do business, and then foreigners to live and work in the country. That's why after the economic downturn, that's lasted 20 years, the country has not experienced any growth. The financial collapse of 2008 (Lehman Bros had a big presence in Tokyo) and the earthquake made things much worse in terms of people not wanting to be based in Japan. For the history buffs out there, it just seems like Matthew Perry and the black ships all over again.

Interesting article. During my JET Program orientation, I learned about "Bobby." The infamous "Bobby." Fortunately, I didn't hear too much about him during my two years in Yamagata Prefecture. But if I remember correctly, one student said "Bobby" to me and... I'm not sure if I gave him a staredown, but I tried my best to express my displeasure without actually saying so.

Anyway, I often got stared at when I lived in the countryside. That shouldn't have come to a surprise for me. But usually, when I was waiting outside at a bus stop, motorists would momentarily take their eyes off the road and stare at me while driving. Now that I think of it, if I were in the position of those motorists, I would've been shocked.

Fascinating! Thank you for sharing this!