Article #11 in the ESL Student Life Stories Project, by Amanda from China, age 20 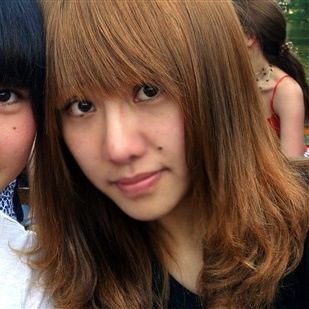 The lovely author of this heartfelt article

There is something that makes me more mature than before. My mother is 48 years old, and in her life she has already had 3 operations in the hospital.

When I was 8 years old, my mother had her first operation, because she had an “Ectopic Pregnancy.” In this operation, my mother stayed in the hospital for about 2 weeks. I was so bad, because I never went to see her during this time, so I only remember a few things from this operation. I felt so sorry for my mother.

Two years later, when I was ten years old, we heard more bad news from the doctor. I couldn’t believe it. My mother had been feeling uncomfortable, so she saw a doctor in the hospital. When the doctor checked her body, he saw my mother’s neck had something strange. Then he told my mother she needed an operation immediately, because she had a “Thyroid Problem.” That was the second time my mother had an operation.

Now, I had planned to study in the USA last year, but then my mother’s body health had a third big problem. She had to do another major operation, so I had to put off my study plan.

My mother started feeling that her eyes couldn’t see some things, and she couldn’t drive. She was very busy with her accounting job, and every day she came back to home so late, so she didn’t have enough time to go see the doctor at first. Then a few days later, she really couldn’t see anything, so she went to the hospital. The doctor told my mother a big bad news: In her brain was a large tumor, about 5 centimeters long. This tumor was called “Pituitary Adenoma.” My mother needed a long operation if she didn’t want to die. So she agreed to do this procedure. This was her third operation. 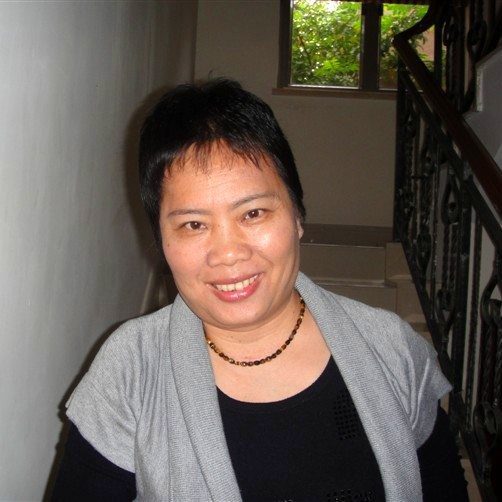 Amanda’s mother, at home in China

This operation I DO remember because I took care of my mother for one month and two weeks in the hospital. The day before the operation, the barber helped my mother cut her hair. I wanted to cry when I saw my mother had no hair.

That day my mother told me something I will always remember. She said, “I don’t want to die. I need to live to take care of your baby when you have a baby, because sometimes you can’t take care of yourself alone! Maybe you give me some trouble, but I love you.”

October 17, 2009 was the day of my mother’s operation. According to the doctor, this major operation would take 4 hours. I was waiting outside for the operation to be finished. I played games on my cell phone. Maybe if I focused on my game, I would forget this operation being done on my mother.

One hour after the message, I just knew I made a mistake in hearing the doctor say “4 hours.” Then, I became afraid my mother’s operation had some problems. At this moment, I felt fear so strong I could not breathe. I cried.

30 minutes later, my mother finished the operation. The doctor told me: “Everything is OK.” I seemed to see the sun shine in my heart! 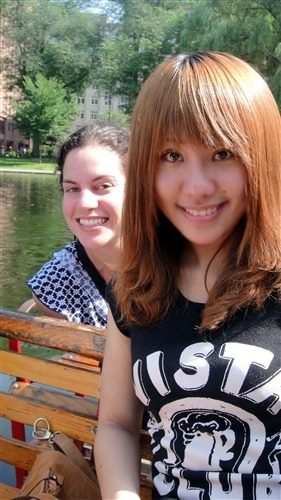 Amanda on Boston’s swan boat… and me, too!

I stood outside my mother’s room all day. I very worried. Then, 2 days later, my mother changed her room because she felt better. My mother stayed in the hospital for one month and 2 weeks. I took care of her every day. I told her stories and sang songs for her. We shared everything every day.

In the first week, she just could only stay in bed, but the second week she could walk in her room! I felt very happy. On the other hand, I was a little sad because my mother looked thinner than before. I thought she looked old. She didn’t seem young anymore. In her face, I couldn’t see beauty, I just saw many wrinkles.

In November, my mother came back home. I was so bad because my mother was afraid I was hungry so SHE cooked dinner for ME while I sat and played a computer game!

Maybe you are thinking, “Oh my God, your mother is sick, and you let her cook for you?!” Yes, I did, and I was so sorry for her, but sometimes mothers need to take care of their children.

One day later, my mother needed medicine, so I took it to her. But I made a big mistake! When my mother left the hospital, the nurse gave me some medicine and she told me, “This is for your mother, 2 days, 1 time per day, half a bottle.” So I gave my mother many medicines, then I watched TV.

Suddenly, my mother started to throw up! I didn’t know what to do! Then she yelled, “ Look at the instructions on the medicine bottle!” Oh my gosh, when I saw the instructions, I wanted to die because it said: “1 time just eat half of 1 pill.”

At the same time, my mother went to the restroom and I gave her a lot of warm water to drink, but she threw up much blood. I was very afraid and I called my father and said “I gave Mother many medicines and she is throwing up now, and I don’t know what I can do. Please come back home!”

Then I called the doctor, but the doctor told me: ”You need to call 120 for an ambulance.” 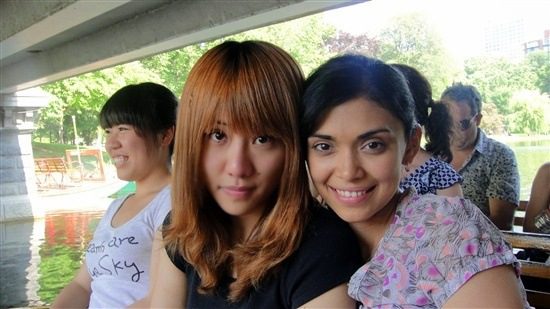 Amanda in Boston with beloved English school classmates from all around the world!

I went to the restroom to take care of my mother again. 15 minutes later my father came back to home. In my heart he looked like a god. Then my father drove my mother to the hospital. That day she threw up 4 hours, and I was so sad. I am her daughter, and instead of helping her, I hurt her.

In my life, I am very sorry for my parents because I always give them troubles. Many people told them, “Your daughter is a bad girl.” But now I want to study, and I want to become a good daughter. I want my parents to be happy.

Recently, my mother’s health has become much better than before, and I feel so blissful. Now I am finally studying English in America, and I always call my parents to talk about everything. I have a nice family: two brothers, my parents and me. My family is the most important thing to me in this world, and I love them so much! I am very thankful to my parents, because they gave me the chance to study in the USA and change my life, and I am so thankful that my mother is healthy again.

Lillie’s Note: Amanda put so much work and emotion into this article. Please leave her a comment, stating your geographical location!

After reading this depressing article, I really appreciate my family for everything they've done for me. Even though I have a bad attitude towards my family when I get really annoyed, they still forgive me and just give me a lecture about it. This made me appreciate them more. When I get older, I would take care of them like how they took care of me.

That is so sad that your mother had to go through so many operations. I hope that she is well and healthy. I also hope that if my mother got sick, I want to be as strong as you and take care of my mother because my mum always asked me, " *My Chinese name* would you take care of me like I did to you? From when you were born up to now?" I would always say yes, but when the time comes I wonder if I will still be around and take care of her so that she will have a good life, and I don't want to break that promise I gave to my mum, since it's always bad to make a promise that you can't keep. Since Ms.Marshall told me to put down my geographical location, I live in Boston, Massachusetts. :) P.S: My grandparents hate the Swan boat ride. They keep complaining that it's too slow and you can't see anything.Ha Ha. :)

This article can bring many people hope. I admire your bravery throughout all the problems you've had with your mother. You even put off studying in the U.S. to care for your mother. She's blessed with such a kind daughter like you. I'm so happy after reading that your mother's health has been okay.

You must have been really frightened after all that happened. The good thing is that your mom is fine and you could always learn from your mistakes.

I completely understand, sometimes life does allow the roles to change, when we have to take care of our parents. Despite all of the trials, sometimes it gives us a chance to grow and get closer to our loved ones. I do not mean when someone is depending on you but as you said visiting her everyday at the hospital. These are the moments that parent cherish in their hearts, when they were at their lowest their children can be there to lift their spirits up. You will make your parents very proud of you by accomplishing your dreams of studying in Amecica, even if your studies had to be delayed due to your mother's sickness, it was for an important cause. More power to you.