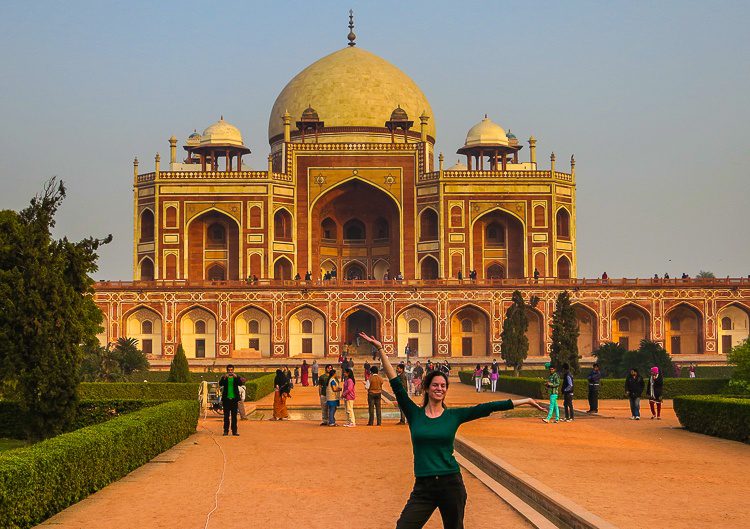 A Mughal Wonder in Delhi…

I have a new favorite building! When our India tour leader declared that we were headed for the “Little Taj Mahal” in Delhi, it was clear we were in for something astounding. However, not one of us was prepared for the caramel-colored confection that soon burst into sight. 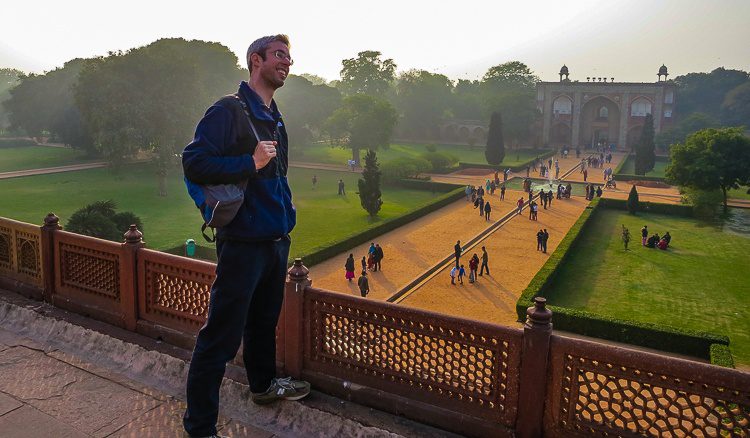 Even the grounds are pretty. Here, my brother stands atop the main building.

Humayun’s Tomb Was Built LONG Ago

Humayun’s Tomb was completed in 1572 C.E. and was commissioned by Bega Begum, the first wife of Mughal Emperor Humayun to bury Humayun after his passing in 1556. It was the first garden-tomb on the Indian subcontinent, thus lending inspiration to the famed Taj Mahal.

You BETTER NOT bring any “Eatables” into the building!

As you likely can tell, Humayun’s Tomb is built with Islamic style by a Persian architect. It is constructed from glowing red sandstone and white marble that change color with the shifting sun. At its highest point, the building is 300 feet tall. Amazing. 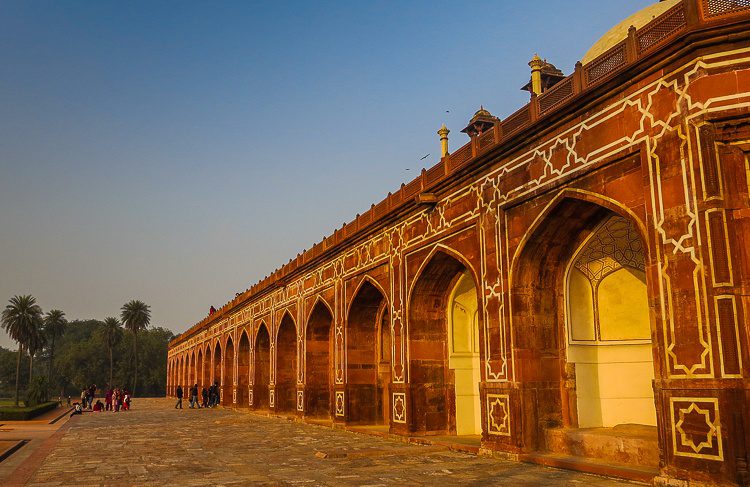 Such intricate architecture at Humayun’s Tomb.

Though Humayun’s Tomb looks serene and stately now, it actually functioned as a refugee camp for five years after the 1947 Partition of India for Muslims fleeing to the newly-created country of Pakistan.

Given that Humayun’s Tomb is nearly 500 years old and housed countless migrating people, hats off to the preservation and restoration crews of India for bringing back the building’s former glory. 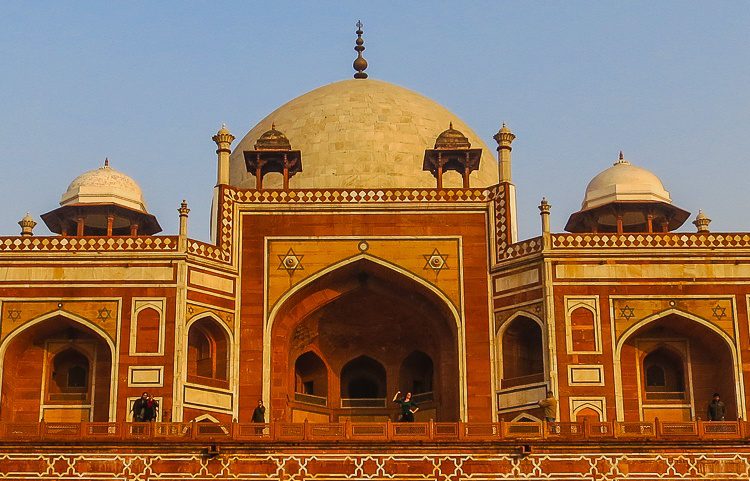 I look teeny, making a muscle atop the building.

Inside this Tourist Attraction of India

My little brother and I wasted no time in sprinting off to take novelty photos. Idea number one consisted of my dear sibling running to the middle of the main walkway while I bounded up the steps and then posed (looking all tiny from afar) making a muscle under the main arch.

Idea number two was to have my 6’7″ little bro pretend to enter the wee doors (sadly locked) at the base of the edifice. Funny! 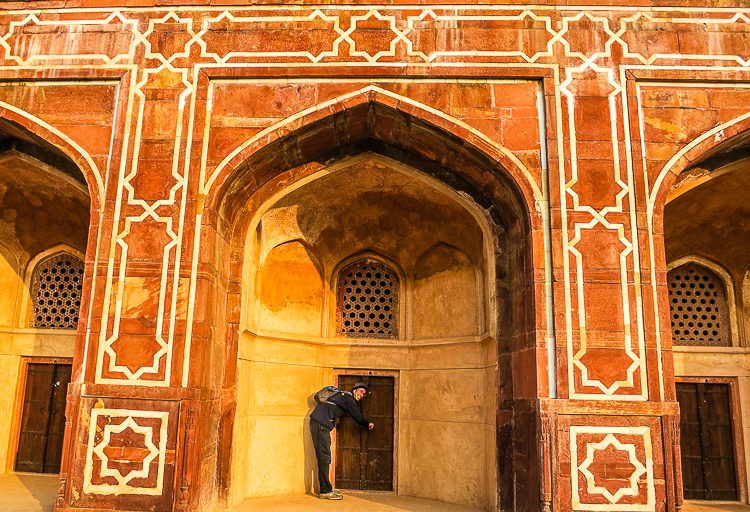 We entered the building itself and gasped in awe. Sun streamed in through windows, which were pattered like lace. High above, the intricate rainbow ceiling smiled down. Feast upon these photos! 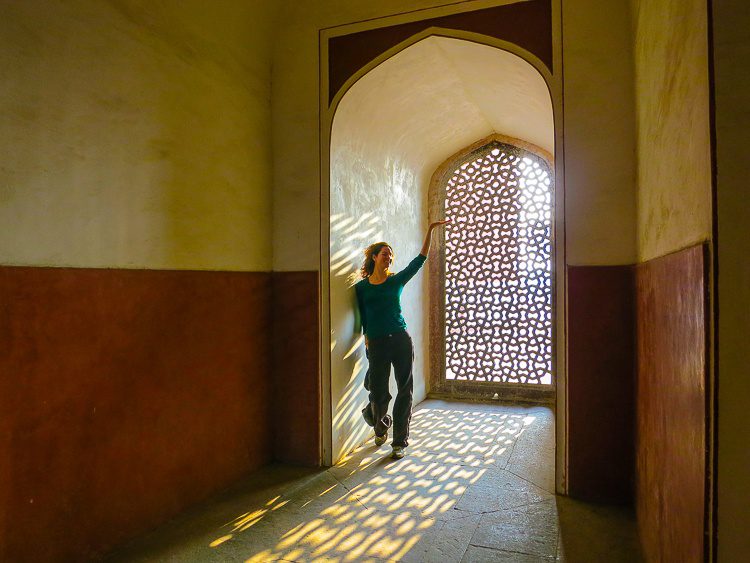 The inside of Humayun’s Tomb has lovely pattered windows.

Architectural Echoes to Other Buildings

The photo below reminds me of some of the intricate ceilings in the Grand Mosque in Abu Dhabi: a feat of Islamic architecture in the United Arab Emirates. 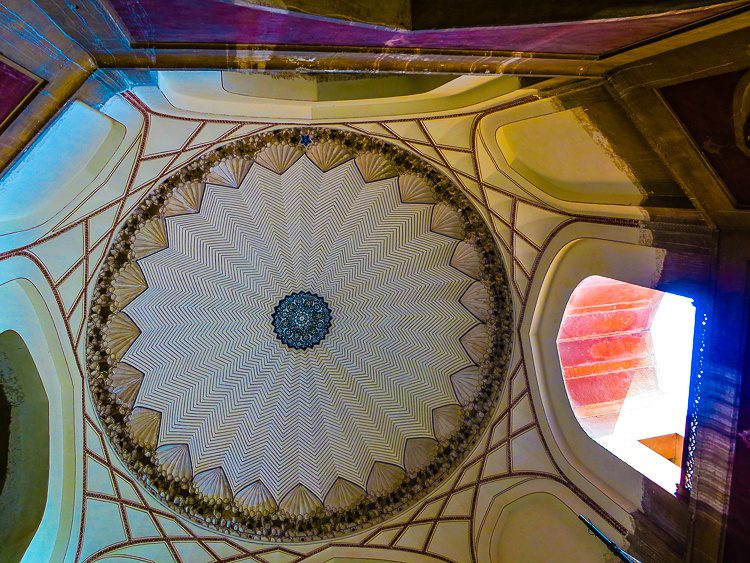 Isn’t this an amazing ceiling design?

Symmetry and Patterns in the “Little Taj Mahal”

Gazing at this front view of Humayan’s Tomb, it’s striking how symmetrical and patterned it is! It is quite the delight to contrast and compare it to the famed Hagia Sophia in Turkey, a structure over triple the age of the “Little Taj Mahal.’

Look closely… Can you see me balancing on one leg high atop the building?

My brother and I loved the visit.

What Do YOU Think of this Famous Indian Building?

Can you see why Humayun’s Tomb is one of my new favorite buildings, right up there with historic forts of Puerto Rico and Greek and Roman ruins of Ephesus? It’s an unmissable sight when visiting India.

So what about you? Do you enjoy this type of architecture? What are your favorite buildings around the world? Do share!

What a gorgeous building.

I absolutely loved this place. It's so photogenic!

What a gorgeous looking place! I can totally see why you got to adore it!

We visited her on our way to its big brother, its a great warm up act for the big thing, the restoration that has been done is superb. Looks like you got a super bright day to photograph it, I am jealous.

Ah yes, if you are alluding to the oppressive air pollution in India, this was one of the VERY few semi-clear days we observed.

We just did a tour with some 30 expats few days ago of Humayun's Tomb, it's wonderful. On April 18, 2013, which is World Heritage Day, there is a function at Humayun's Tomb. Does anyone know more details...