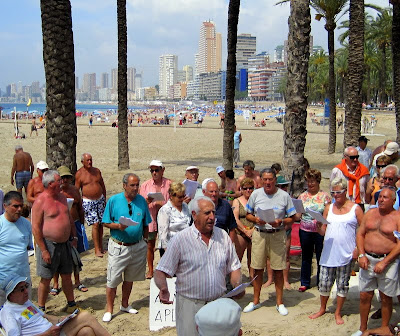 We turned the corner onto Benidorm’s beachfront, when suddenly– “TRA LA!”– a wave of seventy singing voices crashed upon our ears!

“What the heck is that?” I asked our sweet Benidorm tour guide, Maria, as Gary and I gaped at the giant circle of silver-haired singers.

“It is so nice!” sighed Maria, her hand to her heart. “That man in the center, Juan Mari, his whole life he has loved to sing. But unfortunately, he always had another job for money, so he never could follow his dream of becoming a professional singer.”

As if to underline her words, the man held his song packet aloft and shouted, “La siguiente cancion esta en la pagina tres!” The circle of singers cheered in anticipation and eagerly flipped their song packets to page three, clearing their throats in preparation.

“But now that he is retired,” continued Maria breathlessly, “Juan can finally pursue his true love of singing all the time! Isn’t that wonderful? But he does not just do it alone, no. Instead, he brings his gift to others by holding this singing group on this beach, open to anyone!” 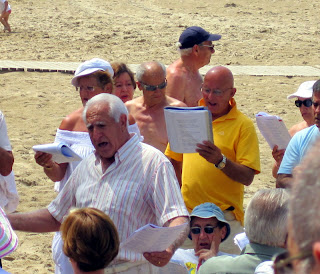 “AMOOOOR!!” began the group in vibrating harmony, grinning and swaying as the notes poured from their throats.

Maria pointed to a sign in the center of the circle. “Normally when people perform outside,” she laughed, “they put a sign asking for donations, like “We Accept Donations.” But do you see what that sign there says?”

I gazed over, did a quick translation, then smiled. “We Accept Applause!” it read.

Benidorm, which is about ninety minutes south of Valencia on Spain’s Mediterranean coast, was rather strange to visit at first in that it is decidedly a resort beach, not a stately and castle-filled example of historical Spain like Granada or Cordoba. But the truth is that the longer Gary and I tour around here under the loving wing of Maria, the more I am seeing the charm in it.

I have recently heard Benidorm be accused of being “not Spain” because of its vacation vibe and massive foreign (mostly British) tourist population. But it’s hard to take the Spain-ish-ness out of Spain! 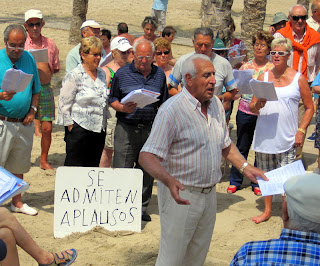 Like the Spanish family I stayed with in Madrid, Maria knows all the vendors and workers in town by name, and greets them with kisses and inquiries about their families. This is Spanish!

And glorious circles of elders belting out Spanish love songs on a beach? This is certainly not American or British. But I wish it were!

“Look how happy all those people singing are,” sighed Maria. “Juan has made them so happy!”

So very, very true. May we all find ways like this silver tenor to embrace our passions… and simultaneously bring joy to others!

Reason One (of a Whole Lot!) to Visit Valencia, Spain
← Read Last Post