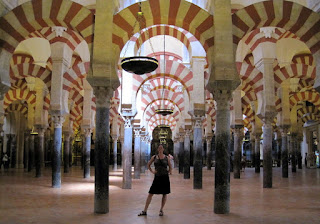 Come, walk with me.

You have likely seen pictures of the world-famous Mezquita of Cordoba, Spain, have you not?

Are you already familiar with those arches upon arches of striped white and russet red?

Well, today is the day you will see it in the flesh, you lucky duck!

Step one: Identify that the entrance ticket to the the Mezquita is free if you show up before ten in the morning, but also identify that you are a lazy bum who is trying to shake off a flu, and thus a few extra hours of sleep may be worth forking out the 8 Euro ($12 Dollar) afternoon ticket price. 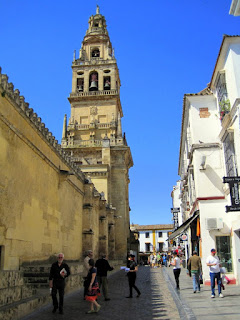 Next, wander around the unassuming courtyard (mmm… those flowering orange trees smell delicious!), and proceed to get embarrassingly lost and confused. Be stunned at your ability to become turned around in a relatively straightforward courtyard.

Finally, swallow your pride and ask a security guard how the heck to actually enter this famous building.

Orientation set, hand your ticket to the guard and stride into the cool darkness. 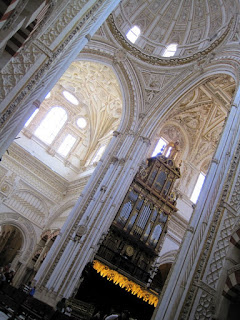 All the pictures you saw before most certainly did NOT convey the power that is smacking you in the face with celestial oomph!

You saw those arches reprinted on paper, but did you realize that they stretch on, and on, and on, and– oooh!— they continue around the next three corners! Walk around with an awe-struck shuffle, mouth agape, heart a-thump.

On all sides of you, other tourists are murmuring: “Splendid! Just splendid!” and, “Ooh, it is LOVELY, honey!” Or my favorite: a throaty, euphoric moan of ecstasy.

But like a Cadbury Creme Egg, sampling the outer layer of the Mezquita is just the beginning. Did you know that the Mezquita is actually a church turned mosque turned church? And the architecture is all the more fascinating for it.

In the year 400 A.D. the Visigoths began building the structure as a Christian church. In 784 A.D. it was bought by an Emir and made into a massive mosque which was added to and added to with each coming year. 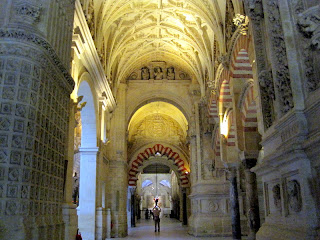 For the subsequent centuries, that Great Mosque of Cordoba was the heart and soul of the Islamic community of Al Andalus.

Even today it remains the largest Mosque in Western Europe– although it is not technically a Mosque anymore.

After the Spanish Reconquista, the Great Mosque was seized by King Ferdinand in 1236 and turned into a Catholic house of worship.

A huge and holy church, along with endless glittering Jesus sculptures, was inserted right into the MIDDLE of the delicious Moorish architecture. Talk about pushing one religion on (or in this case, into) another! 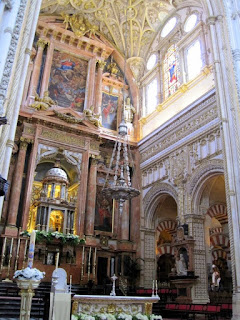 And this brings us to the scrumptious center of this magical building. Walk past the thousands upon thousands of wonderful Islamic arches, and suddenly– OH!– there is a zillion-foot-tall ceiling in the center with creamy white curls of decoration so tender and delicate, you will want to lick the walls! But please do not. This is a house of worship, after all.

I spent a ton of time gasping and cooing at the loveliness (bopping between the Islamic and the Christian sections), all the while crouching in different frog-like positions to try to show you, oh reader, the scale of it all with my little point-and-click camera.

I hope you can somewhat get a feel for the power of the Mezquita’s enormity through these shots! Look for the teensy tiny little humans in each photo to get an idea of how wee you feel when inside.

So how does this building reflect the town it is in? Well, Cordoba, Spain, was (for a time) a historically fabulous example of harmony in diversity. 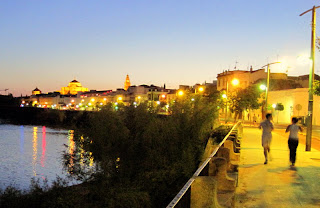 In old Cordoba, Christians, Muslims, and Jews lived, worked, and traded side by side, each group contributing its talents and structures to the city.

If you walk through the charming streets of Cordoba today, you will see a breathtaking church here, and an ornate Islamic door decoration there; a great Synagogue here, and the biggest Mosque in Western Europe there.

Unfortunately, I recently heard a rumor that, because many Muslims still hold the Mezquita as a holy place and try to pray, special Catholic “Prayer Guards” now prowl the premises to hurl any non-Catholic worshiper out the door. 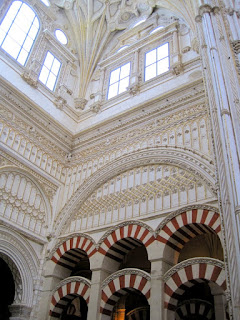 If this is indeed true, it seems rather too bad. Why not (asks the naive mixed child) have areas for each group to pray within the same building?

There are theories afoot that children of mixed parentage are the most beautiful: from Black-White Barack Obama to my Japanese-Welsh college roommate Meg, to, well, Jewish-Christian me!

But whether or not it is actually true that crossbreeding creates hotter humans, you really get the feeling standing in the Mezquita that it is true for art!

I love churches and you're right this one is a treasure. I was in Granada where the Cathedral was built over a mosque but luckily the Alhambra still stands. The stark contrast of the two was very interesting. I think it's a great idea to allow multi-denomination worship and yes, probably naive too. :)

sexy architecture - eh ;) Just had to laugh at your Tag? Category ? Keep it up!! On another note, i think, I will subscribe to you as a student to wordpress, your blog is well organized and easy to read...

Beautifully written, just as if I 'd walk in the marvelous layer of religions and traditions again, was there last year and can very much relate to your essay! The idea of giving everyone a place to pray within is a great idea!

So glad that you were able to visit, too, and that you can relate!

The World of Deej

Just awesome...we really enjoyed Spain, and hope to return one day soon. It is funny you mentioned lousy hotel breakfasts...thats what I wrote about yesterday:)

I love your blog! I studied abroad last year for 9 months and I know the feeling, it goes by so fast!! I'm glad you are enjoying Spain. :) I studied abroad in Malaga a year ago and am going to be living in Madrid next year. I have been to the mezquita twice now and each time I've gone, I'm floored by the building's vastness and architecture.

I'm only sad I didn't find your blog before!! Enjoy the rest of the time that you have!